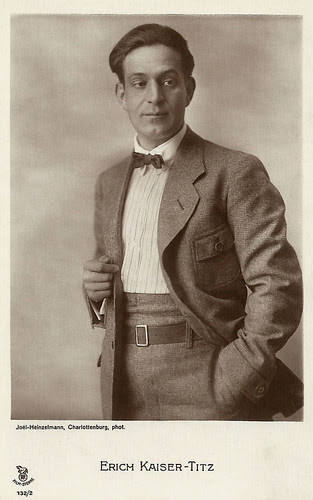 German postcard by Rotophot in the Film-Sterne series, no. 132/2. Photo: Joël-Heinzelmann, Charlottenburg (Berlin).

One of the Most Gifted Silent Film Actors
Heinrich Felix Erich Kaiser-Titz was born in Berlin in 1875. Being the son of an architect, he had a professional training as a metal smith. He worked as a mason, carpenter and foreman in construction. His first stage acting engagements had him travel all over Northern Germany: Lübeck, Kolberg, Hannover and Bremen. In 1906 he returned to Berlin and worked at the Neue Theater, and subsequently, in 1909, 1913 and 1926 at the Deutsche Theater under the direction of Max Reinhardt. He played such roles as Jack Brown in William Somerset Maugham’s Freund Jack (Jack Straw), as Abrezkow in Leo Tolstoi’s Der lebende Leichnam (Zhivoi Trup), as Bazaine in Franz Werfel’s Juarez und Maximilian, as well as in the Carl Sternheim comedies Die Sünde and Bürger Schippel. In 1911 Kaiser-Titz had his film debut in the short Das gefährliche Alter/The dangerous age (1911, Adolf Gärtner). Between 1913 and 1915 he worked for producer Oskar Messter as partner of early German film star Henny Porten in films often directed by Curt A. Stark or Rudolph Biebrach. Soon he showed that he was one of the most gifted actors of the German early silent film. During the First World War the public knew him as the elegant detective Engelbert Fox, in a series of films directed by Richard Oswald, such as the two-part film Der Fund im Neubau/The finding in the new building (1915, Richard Oswald). Kaiser-Titz played probably his most important role in the film adaptation of the opera Hoffmanns Erzählungen/Tales of Hoffmann (1916, Richard Oswald), in which the actor played E. T. A. Hoffmann himself. He personified the legendary detective Sherlock Holmes in Dr. MacDonalds Sanatorium (1916, Willy Zeyn). Kaiser-Titz also played the character of Phantomas in four films of Greenbaum-Film: Ramara (1916), Die Erbe von ‘Het Steen’/The heritage of ‘Het Steen’ (1917), Das Nachtgespräch/The night conversation (1917) and Die Glocken der Katharinenkirche/The bells of St. Catherine's Church (1918). The series was probably inspired by the popular Gaumont serial Fantomas. In the late 1910's Kaiser-Titz also often acted opposite several female stars of the era, such as Ellen Richter, Mady Christians, Lotte Neumann, Ressel Orla, and Hedda Vernon. He acted for instance in the intriguing Ellen Richter vehicle Das Bacchanal des Todes/The Bacchanal of death (1917, Richard Eichberg), found at the Netherlands Filmmuseum (now Eye Institute Netherlands) some years ago. In this film Richter plays the dancer Lona who has the wife of painter Alexander Andrea (Kaiser-Titz) killed. The killer (Werner Krauss) threatens Lona to tell Andrea all if she doesn’t marry him, so she throws herself off a cliff. Dying in Andrea’s arms, she asks him to forgive. 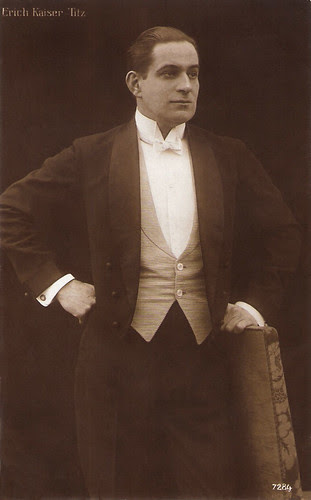 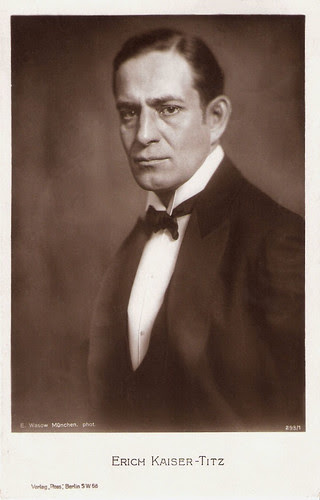 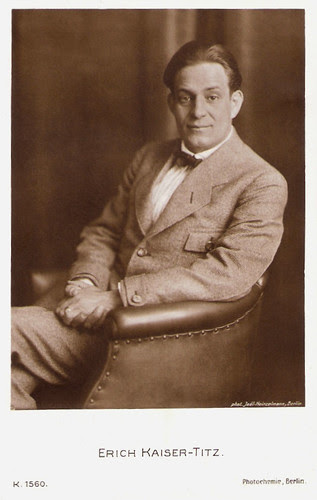 Exotic Detective
In addition to these supporting parts to female stars, Erich Kaiser-Titz also starred in many films himself in the late 1910's and early 1920's. A major part was his title role in Ferdinand Lassalle (1918, Rudolf Meinert), with Hanna Ralph co-acting and with a script co-scripted by E.A. Dupont. After this followed films such as the four-part film Kain (1918, Bruno Rahn, Walther Schmidthässler), Die Frauen vom Gnadestein/The women of Gnadestein (1921, Robert Dinesen, Joe May) costarring Margarethe Schön and co-scripted by Thea von Harbou and Joe May, the exotic detective film Peter Voss/The Man Without a Name (1920, Georg Jacoby) and its sequels Der Kaiser der Sahara/The Emperor of the Sahara (1920, Georg Jacoby) and Gelbe Bestien/Yellow beast (1920, Georg Jacoby). In the early 1920's, Kaiser-Titz did various films together with Lya Mara, including the two-part Das Mädel von Piccadilly/The Girl From Piccadilly (1921, Friedrich Zelnik). Other films were the two-part Das Liebesnest/The Love Nest (1922, Walther Fein) with Paul Wegener, Der Favorit der Königin/The favorite of the Queen (1922, Franz Seitz sen.) with Hanna Ralph as the queen, Wilhelm Tell (1923, Rudolf Walther-Fein, Rudolf Dworsky) in which Kaiser-Titz was emperor Albrecht I and Conrad Veidt the hated Gessler, and Der grosse Sensationsprozess/The great sensation process (1923, Karl Freund), in which Kaiser-Titz starred as a lawyer and Käthe Haack played his wife. In the mid-1920's Kaiser-Titz often acted opposite Lya de Putti, as in Malva (1924), Claire (1924) and Im Nahmen des Kaisers/In the Name of the Kaisers (1925), all directed by Robert Dinesen. Next came parts in Die vom Niederrhein/Those from Niederrhein (1925, Rudolf Walther-Fein) starring Erna Morena, Der Mann, der sich verkauft/The man who sells himself (1925, Hans Steinhoff) with Olaf Fjord, Ich hatte einen Kameraden/I had a comrade (1926, Conrad Wiene), Hölle der Liebe/Hell of Love (1926, Bruno Rahn) with Vivian Gibson, and Was Kinder den Eltern verschweigen/What the parents conceal children (1927, Franz Osten). He had his last leading role in Wenn die Mutter und die Tochter.../If the mother and daughter ... (1928, Carl Boese) with Trude Hesterberg. In the 1920's Kaiser-Titz also played supporting parts with the action heroes of the Weimar cinema such as Harry Piel, Carlo Aldini and Luciano Albertini. He even played with former American action movie hero Eddie Polo in a couple of German films. Kaiser-Titz often appeared as high ranked officers, aristocrats and well-to-do men, either in male leads or supporting parts. His last supporting part was in the Ufa drama Ungarische Rhapsodie/Hungarian Rhapsody (1928, Hanns Schwarz) starring Dita Parlo and Willy Fritsch, apart from a part in the compilation film Rund um die Liebe (1929, Oskar Kalbus). All in all Erich Kaiser-Titz acted in almost 300 films, according to Wikipedia. In 1928 Erich Kaiser-Titz died in Berlin and was buried at the Südwestkirchhof Stahnsdorf. He was only 53. 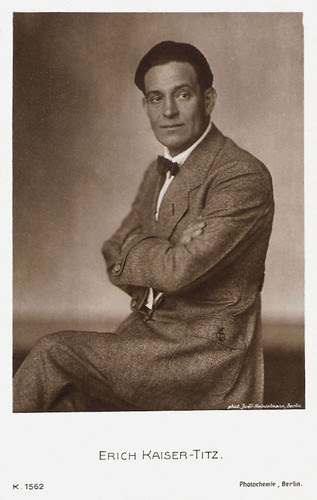 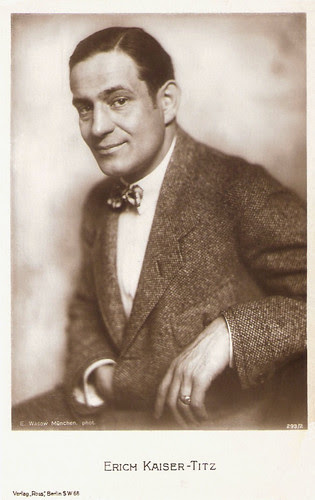 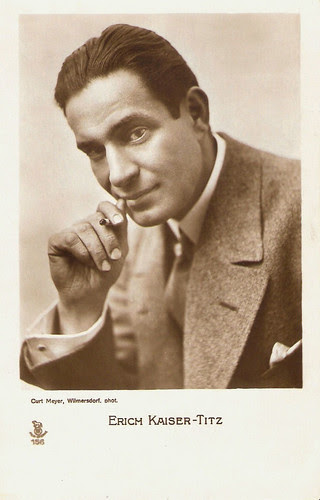