From 1957 on Eva-Maria Hagen (1934) became known as 'East-Germany’s Brigitte Bardot' and appeared in some 50 films and TV-productions. The German actress is also a well-known singer, painter and author. And the mother of Nina Hagen. 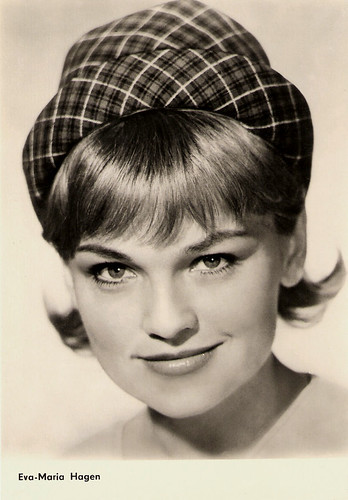 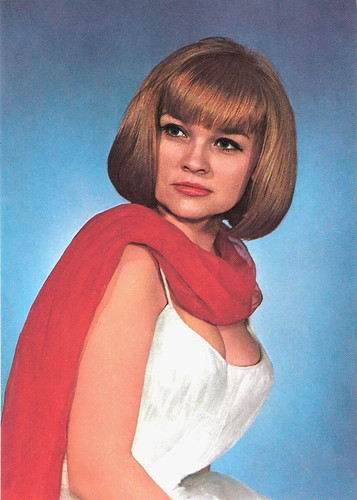 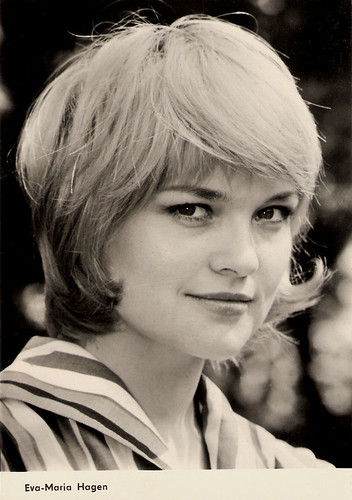 Sexy Blondes
Eva-Maria Hagen was born as Eva-Maria Buchholz in Költschen, Germany (now Kolczyn, Poland) in 1934. She grew up in Kremlin at the edge of Pommern until the age of ten. After graduating from a machine fitter training, she started to attend an actor's training in East-Berlin in 1952. Already a year later she played a leading part under the direction of the legendary Bertolt Brecht at the famous Berliner Ensemble Theater in the play Katzgraben (Cat’s Grave) by Erwin Strittmatter. A year later she married the author and screenplay writer Hans Oliva-Hagen, but they divorced in 1959. In 1955 their daughter Catherina was born, who would later become pop star Nina Hagen. In 1956 Eva-Maria Hagen continued her acting studies at the Fritz-Kirchoff-Akademie in West-Berlin. She began her film career in the heart-warming DEFA comedy Vergesst mir meine Traudel nicht/Don’t Forget My Traudel (1957, Kurt Maetzig). According to IMDb reviewer Lillian Hartman, Hagen refreshingly played a silly but also very anxious girl who has no place in this world due to World War II. In 1958 she obtained an engagement at the Maxim-Gorki-Theater in Berlin, and in the following years, Hagen became one of the most important actresses of the East-German theatre scene. Although she is dark-haired by nature she had to dye her hair blonde to play roles of sexy blondes, which gave her the nick-name ’Brigitte Bardot der DDR’ (Brigitte Bardot of the German Democratic Republic). 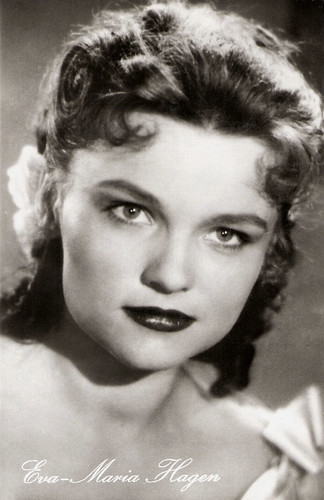 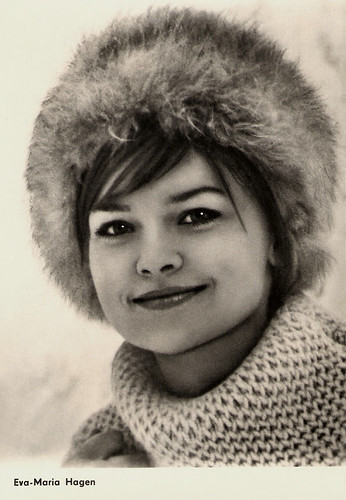 Defamation of the State
From 1957 till 1965, Eva-Maria Hagen appeared in some 50 films and TV-productions, like Nur eine Frau/Just A Woman (1958, Carl Balhaus), the thriller For Eyes Only (1963, János Veiczi), and the comedy Reise ins Ehebett/Journey in a Marriage Bed (1966, Joachim Hasler) with Anna Prucnal. She was a star guest at the Filmfestival in Karlovy Vary and other events. In 1965 she met songwriter and poet Wolf Biermann. The two became life partners from 1965 till 1972. In 1966, Biermann got a berufsverbot to play and publish by the SED. This put Hagen also in the line of fire of the GDR government. There was a lawsuit against her concerning ‘defamation of the state’. Job opportunities got heavily restricted so that Hagen at times had to work for provincial theatres and she could only play small roles in films like Die Fahne von Kriwoj Rog/The Flag of Krivoy Rog (1967, Kurt Maetzig) and Die Legende von Paul und Paula/The Legend of Paul and Paula (1973, Heiner Carow) with Angelica Domröse. Furthermore, she was discriminated and observed by the State Security. In 1977, after she protested against Biermann's expulsion from the GDR in 1976, she was finally also stripped of her GDR citizenship. She was forced to emigrate with Nina and settled in Hamburg. 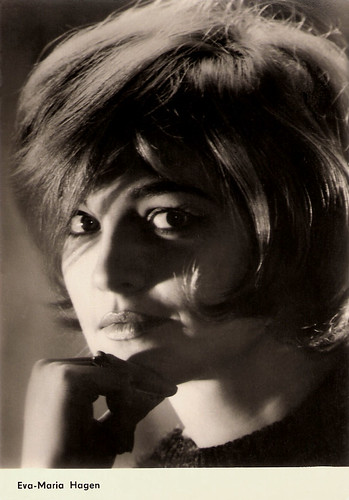 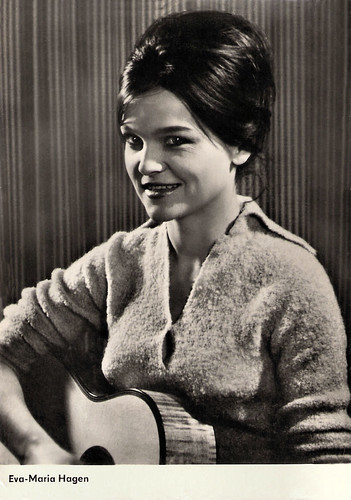 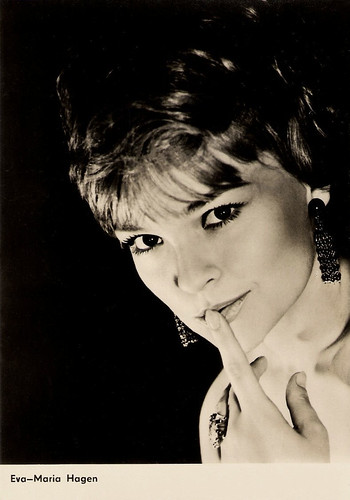 After the Fall of the Wall
In West-Germany Eva-Maria Hagen started a successful career interpreting songs by Wolf Biermann and Bertolt Brecht. Her debut album, Nicht Ohne die Liebe (1979, Not Without Love), was a collection of Russian and Gypsy folk songs translated into German by Biermann. He started to write songs for her which she released on the album Ich Leb' Mein Leben (I Live My Life) in 1981. On Das mit den Männern und Den Frau'n (1985, That Thing Between Men and Women) and Michael, Michael (1986), she continued the collaboration with Biermann. After the fall of the wall in 1989, she was finally allowed to perform again in East Germany, like at the Leipziger Messe together with Biermann. She also played supporting roles in films like Gibbi - Westgermany (1980, Christel Buschmann) with Eric Burdon, and Marmor, Stein und Eisen bricht/Marble, Stone and Iron Break (1982, Hans-Christof Stenzel), a biopic of tragic Schlager singer Drafi Deutscher. At the time she lived together with director Matti Geschonneck, and later with pianist Siegfried Gerlich. 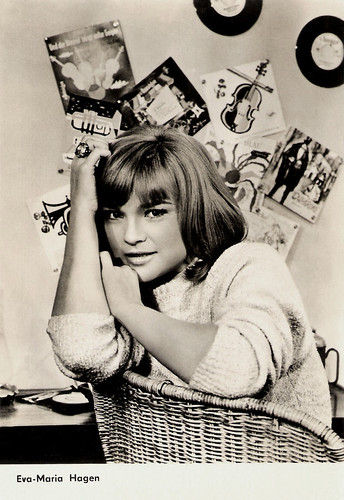 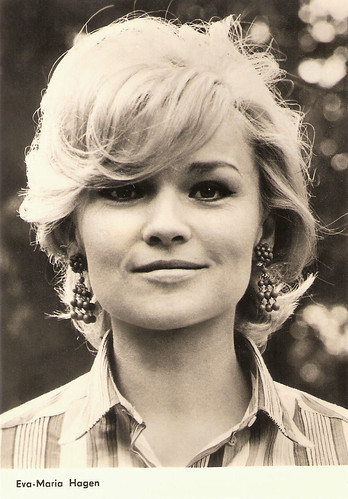 Eva and the Wolf
Eva-Maria Hagen continues to appear regularly on German TV, like in the popular adventure series 4 gegen Z/Four Against Z (2005-2007) starring Udo Kier. Together with her daughter Nina and her granddaughter Cosma Shiva she appeared in the TV-film Ein Mann für gewisse Sekunden/A Man For Certain Seconds (1999, Bernhard Stephan). Besides her theater and film projects, as well as exhibitions of her paintings, she continued to release CD‘s: Wenn Ich Erstmal Losleg (1996, Once When I get Started) with new Biermann songs using Baltic folk material, and on the occasion of Brecht's 100th birthday she released Joe, Mach die Musik von Damals Nach (1997, Joe, Play That Music from Then Again). Her book Eva und der Wolf (1998, Eva and the Wolf) about her time together with Biermann was a huge success in Germany. She was awarded the Carl Zuckmayr medal for it. In 1999 she released another album with Biermann songs: Eva Singt Wolfslieder (Eva Sings Wolf’s Songs), and in 2006 she published another autobiographical book, Eva jenseits vom Paradies (Eva Out of Paradise). In the cinema she was seen in Dinosaurier/Dinosaurs (2009, Leander Haußmann) with Walter Giller and Nadja Tiller. This crime comedy was a remake of the film Lina Braake (1975, Bernhard Sinkel) about an 81-year-old lady bank robber. Her most recent film is the intriguing war drama Lore (2012, Cate Shortland) featuring Saskia Rosendahl. Eva Maria Hagen lives in Hamburg, Berlin and der Uckermark. 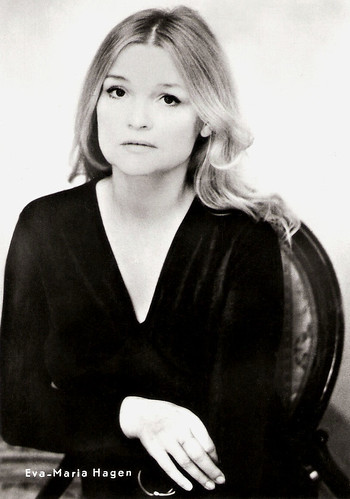 Wonderful!. When I was reading about Eva-Marie, I immediately wondered if she was the mother of Nina Hagen, but then I thought...no, it can't be. Interesting story and nice to be able to make the connection. They are wonderful together.

A real beauty. I will have to seek out her films.