Glamorous, mysterious diva Zarah Leander (1907-1981) was a Swedish actress and singer, who is now best remembered for her German songs and films from the late 1930s and early 1940s. With her fascinating and deep voice, she sang melancholic and a bit frivolic songs that were specifically composed for her. Zarah was for a time the best-paid film star of the Third Reich. In her Ufa vehicles, she always played the role of a cool femme fatale, independently minded, beautiful, passionate, self-confident and a bit sad. It gave her the nickname 'the Nazi Garbo', but a recent book claims that she was in fact a Soviet spy. 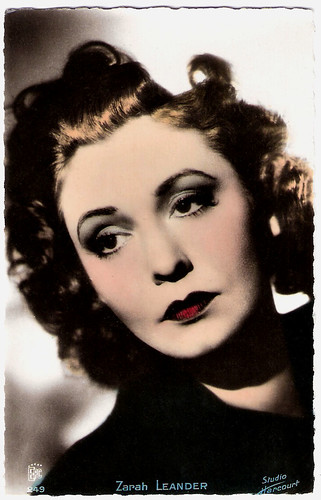 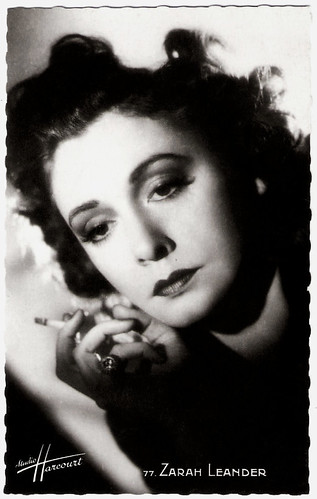 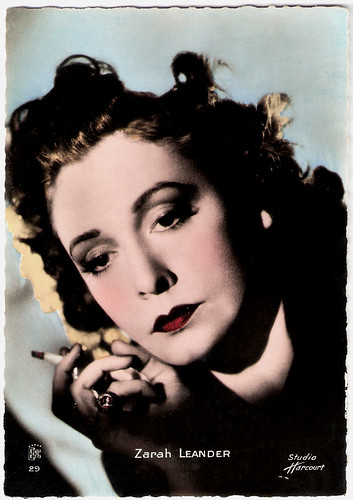 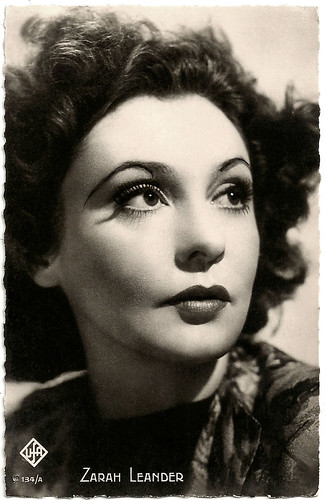 A New muse
Zarah Leander was born Sara Stina Hedberg in Karlstad, Sweden, in 1907. Her parents were Anders Lorentz Sebastian Hedberg and Matilda Ulrika Hedberg. Although she studied piano and violin as a small child, and sang on stage for the first time at the age of six, Sara initially had no intention of becoming a professional performer and led an ordinary life for several years. As a teenager she lived two years in Riga (1922–1924), where she learned German, took up work as a secretary. She married actor Nils Leander in 1926, and they had two children: Boel (1927) and Göran (1929). In 1929 she had her breakthrough when her counter alt voice was recognized by revue king Ernst Rolf. In his touring cabaret she sang for the first time Vill ni se en stjärna (Do you want to see a star?) which soon would become her signature tune. She got a record contract with the Odeon company, for which she recorded 80 songs till 1936. One of the songs she recorded in 1930 was Marlene Dietrich's Ich bin von Kopf bis Fuß auf Liebe eingestellt from Der Blauen Engel/The Blue Angel (1930, Josef von Sternberg). In the early 1930's, Leander played in several shows and performed in three Swedish films, including Dantes Mysterier/Dante's Mysteries (1930, Paul Merzbach) and Falska Millionären/The False Millionaire (1931, André Berthomieu, Paul Merzbach). Her persona in those films was already that of the singing, mundane vamp. She had her definitive break-through as Hanna Glavari opposite the legendary Swedish film star Gösta Ekman in Franz Lehár's operetta Die lustige Witwe (The Merry Widow) (1931). In 1932 she divorced Nils Leander. She declined American work offers but she opted for an international career on the European continent because of her two school-age children. In 1936 she went to Vienna to star at the Theater an der Wien in the operetta Axel an der Himmelstür, composed by Ralph Benatzky and directed by Max Hansen. This parody on Hollywood and Greta Garbo was a huge success. She also got the role of a successful revue star in the Austrian film Premiere (1936, Geza von Bolvary) with Karl Martell. Then she was offered a three-film contract by the German Universum Film AG (Ufa) studio's, as propaganda minister Joseph Goebbels was looking for a new muse of the cinema of the Third Reich. She would earn approximately 200,000 Reichsmark, and 53% of her gage would be paid in Swedish Kronor (crowns). Leander said yes, in spite of the political situation. 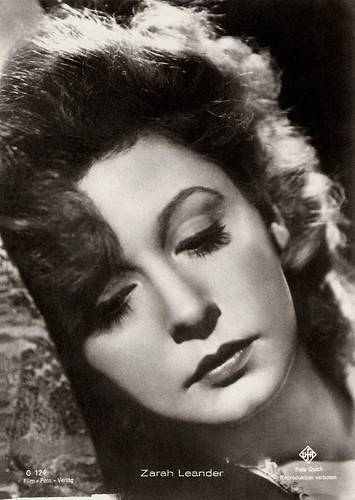 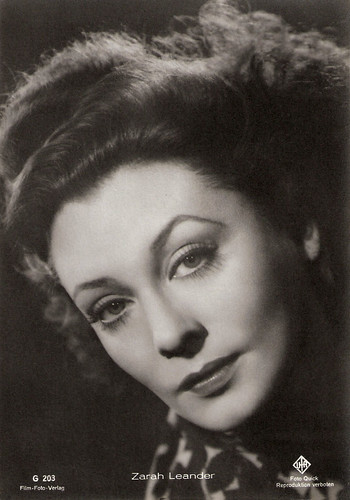 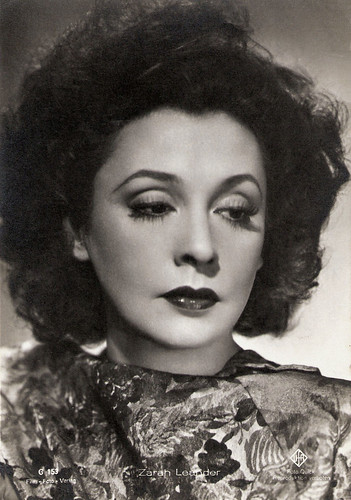 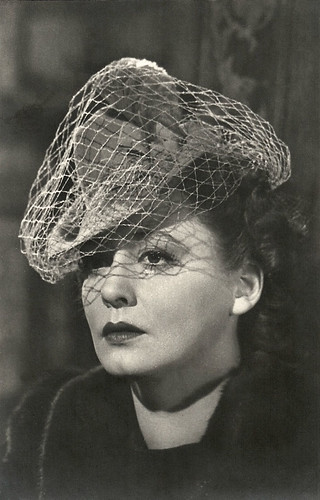 Yes, Sir
Zarah Leander's first film at Ufa was Zu neuen Ufern/To New Shores (1936) directed by Detlef Sierck (later known as Douglas Sirk). After the other two films of her contract, La Habanera/Cheated by the Wind (1937, Detlef Sierck) with Ferdinand Marian, and Heimat/Home (1938, Carl Froelich) with Heinrich George, she was so popular that Josef Goebbels, who according to his diaries did not like her, had to continue her contract. On renewal, her salary increased even further, and in 1940 the Ufa would offer her a contract for six films, to be produced in the following two years, for a total of 1 million Reichsmark. Zu neuen Ufern had launched songs such as Ich steh' im Regen (Standing in the rain) and Yes, Sir, that were sold on record in various languages. Actually, these songs earned her more money than her films, even if she was the best paid German female film star in the early 1940's. Her songs Davon geht die Welt nicht runter (It is not the End of the World) and Ich weis, es wird einmal ein Wunder gescheh'n (I Know One Day a Miracle Will Happen) from her film Die grosse Liebe/The Great Love (1942, Rolf Hansen) received double entendre in the time they were distributed and struck chords with the Germans. Among her other films in those years were the comedy Der Blaufuchs/The Blue Fox (1938, Viktor Tourjansky) with Paul Hörbiger, a biopic of Pyotr Ilyich Tchaikovsky Es war eine rauschende Ballnacht/It was a Gay Ball Night (1939, Carl Froelich) with Marika Rökk, Der Weg ins Freie/The Way to Freedom (1941, Rolf Hansen) with Hans Stüwe, and the crime film Damals/In the Past (1942, Rolf Hansen) again opposite Hans Stüwe. In her films, Leander often portrayed independent, fatal women, with strong will-power but haunted by destiny. In real life she was a 'tough cookie' too, as she demanded that she should select her own scripts and composers. At a party , Goebbels once asked her ironically: "Zarah... Isn't this a Jewish name?" "Oh, maybe", she answered him, "but what about Josef?" "Hmmm... yes, yes, a good answer", Goebbels had replied, according to IMDb. 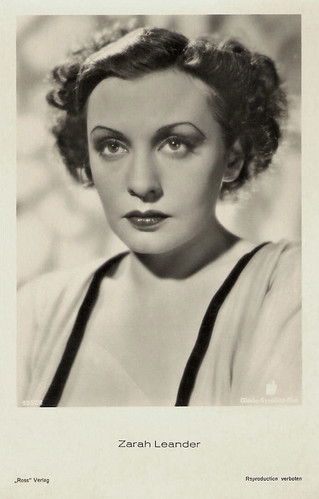 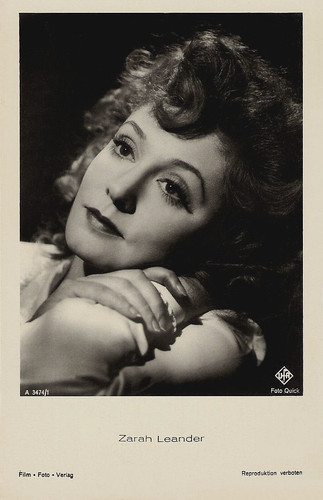 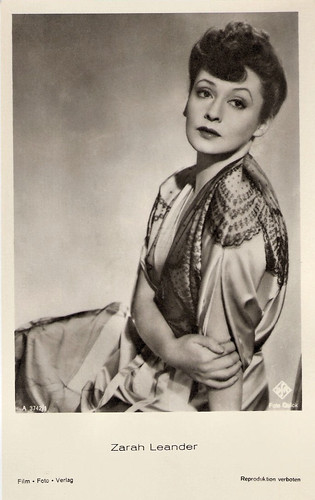 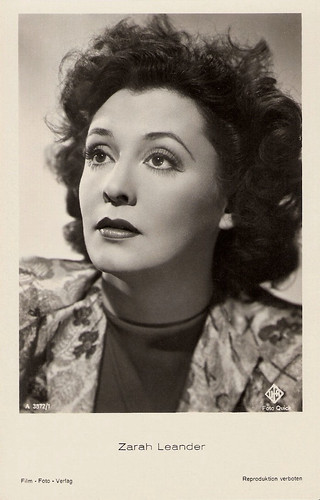 Diasappointments
Zarah Leander never became a party member and refused to take German citizenship, but her films and song lyrics were viewed by some as propaganda for the Nazi cause. After her villa in the fashionable Berlin suburb of Grunewald was bombed during an air raid in 1942 and the increasingly desperate Nazis pressured her to apply for German citizenship, she decided to break her contract with Ufa. In 1943, she secretly left Germany and retreated to Sweden, where she had bought a mansion at Lönö, not far from Stockholm. Initially she was shunned by much of the artistic community and public in Sweden (In 1936 the reactions had been completely different when she started to work in Nazi-Germany. Most of her Ufa films were very popular in Sweden as in the rest of Europe). In November 1944, Swedish radio decided to no longer play her records. But, as Antje Ascheid describes in her in-depth study Hitler's Heroines, Zarah's role was complex: "She regularly supported communal fundraisers and appeared in 'reguest concerts' - live radio shows in which famous star singers performed songs requested mostly by soldiers at the front - that aired all over the Reich. In addition, Leander was frequently depicted attending social functions at the homes of political leaders, which further linked her ublic persona to Nazi officials in power." After the war she was severely questioned, but in 1947 she managed to record her songs again in Switzerland, where she also sang for the radio. Concert tours followed, first in Switzerland, then in 1948-1949 in Germany; and in 1949 she performed in Sweden again. Leander tried her luck once more in film. Gabriela (1950, Geza von Cziffra) was the third biggest box office hit of that year in Germany. The following films, Cuba Cubana (1952, Fritz Peter Buch) with the new and younger idol O. W. Fischer, and Ave Maria (1953, Alfred Braun) with her old partner Hans Stüwe, were both disappointments. 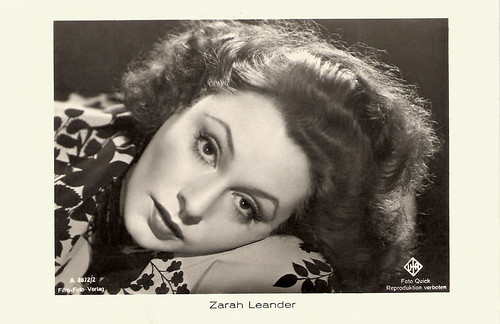 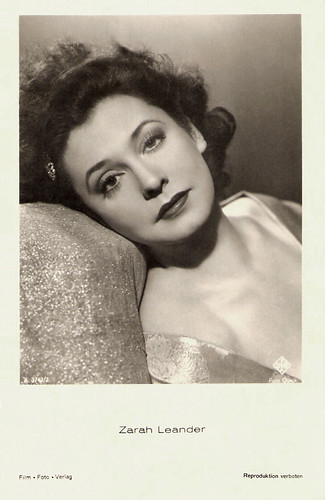 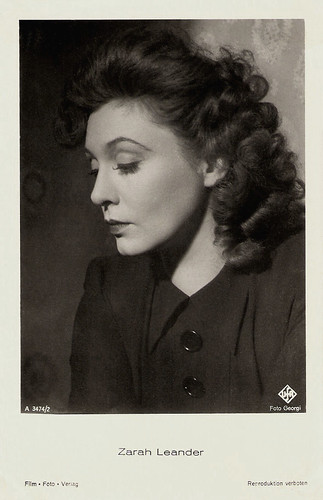 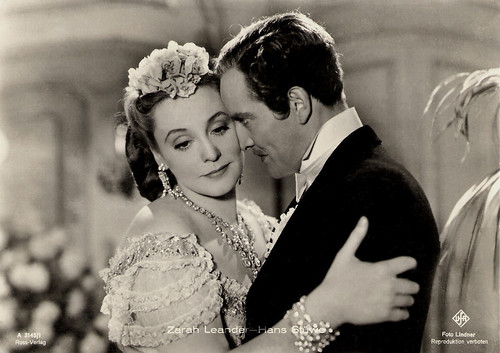 Evergreens
Thus Zarah Leander's film career came to an end, even though she still did four more films till 1966. Her last film was the Italian comedy Come imparai ad amare le donne/Love Parade (1966, Luciano Salce) with Michèle Mercier, Nadja Tiller and Anita Ekberg. Leander would continue with musicals and operettas on stage however, and she also sang her by now evergreens in TV-shows. She published her memoirs, Zarah's minnen (Zarah's memories), in 1972. In 1975 she played in her last musical, Das Lächeln einer Sommernacht by Stephen Sondheim and Hugh Wheeler based on Ingmar Bergman's 1955 film Sommernattens leende (Smiles of a Summer Night). In 1979 Zarah Leander officially retired and in 1981 she died of a stroke in Stockholm and was buried on her estate Lönö. She was married three times. After Nils Leander she was married to journalist Vidar Forsell (1932-1943). Her third husband was pianist Arne Hülphers from 1956 till his death in 1978. In 2003 a bronze statue was raised in Zarah Leander's hometown of Karlstad at the Opera house of Värmland where she began her career. After years of discussions, the town government at last accepted this statue on behalf of the first Swedish local Zarah Leander Society. A year later the book The Mystery of Olga Chekhova (2004) by Anthony Beevor was published, in which the author claimed that both Olga Tschechova and Zarah Leander worked for Soviet intelligence during World War II. According to the author she supplied information about Nazi Germany to a Soviet contact during her visits home to Sweden. In Germany, Zarah Leander is still an icon of the gay community, and her persona has been recreated by many drag queens. Performers like Nina Hagen have covered her songs, and director Quentin Tarantino used her song Davon geht die Welt nicht runter (It is not the End of the World) in his successful war thriller Inglourious Basterds (2009). 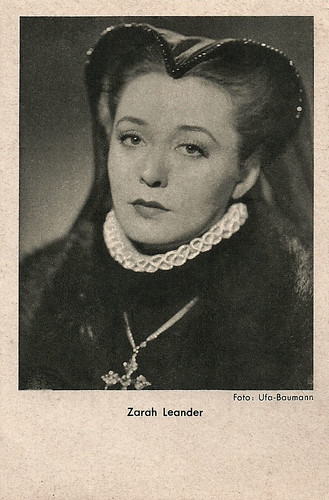 
Zarah Leander sings Davon geht die Welt nicht runter (It is not the End of the World) in Die grosse Liebe/The Great Love (1942). Song writer Bruno Balz wrote this song in 1941, when he was in Gestapo arrest because of his homosexuality. Source: zarahlilawen (YouTube).


A campy Zarah Leander sings Wunderbar in 1977 at one of her last concerts in Stockholm. Source: Creaturefree (YouTube).

Everyone who knew her laughs at it, she wasn't smart enough actually, and if she HAD been, she sure as hell wouldn't have abstained from all the parties and socializing with German militaries, that she COULD have attended, bit did not.

Considering that she was Germanys biggest movie star 1937-43, she only met Hitler once, and of course she saw the cultureminister Goebbels, but it was very well known that she was very little interested in meeting bigwigs. Something any spy would never miss the opportunity to do...nuff said.

I've always been interested in Zarah Leander..her lovely low pitched voice, her glam appearance in diamonds and furs. The question as to her performing in Nazi Germany while they murdered people in concentration camps can be answered like this: It was certainly not wonderful to silently go along because the regime gives you money. I look at her gifts as an entertainer and not as her failings as a political activist (which she was not) or even as a human being. 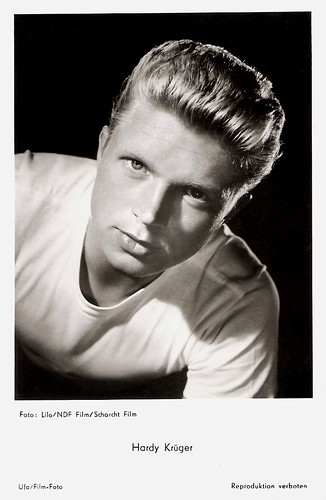