French stage actor Léon Bernard (1877-1935) was a Sociétaire of the noted Comédie-Française. Before, during and after the First World War, he also appeared in dozens of silent films, including Les misérables (Albert Capellani, 1912). Bernard also worked as a theatre director. 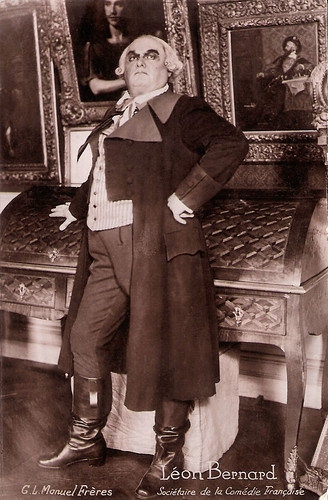 French postcard. Photo: G.L. Manuel Frères. Caption: Sociétaire de la Comédie Française.
The Comédie-Française is the only state theatre in France to have its own troupe of actors. The membership of the theatrical troupe is divided into 'sociétaires' and 'pensionnaires.' The former are regular members of the organisation and as such receive a pension after 20 years of service, while the latter are paid actors who may, after a certain length of service, become 'sociétaires.'

The 354th sociétaire of the Comédie-Française

Léon-Constant-Jean Bernard was born in Paris in 1877. After his debut as stage actor in local theatres, he contributed as Raynouard to the creation of Madame Sans-Gêne by Victorien Sardou and Émile Moreau, which premiered in 1893 at the Théâtre du Vaudeville in Paris.

He then joined the company of the Théâtre-Libre by André Antoine under whose direction he acted in e.g. King Lear by William Shakespeare, Les Avariés by Eugène Brieux, Ghosts by Henrik Ibsen and The Power of Darkness by Leo Tolstoy at the Théâtre Antoine. After that he was in Julius Caesar by Shakespeare, Ramuntcho by Pierre Loti, Beethoven by René Fauchois and La Maison des juges by Gaston Leroux at the Odéon where Antoine had taken up direction in 1906.

In 1910 he debuted at the Comédie-Française in Les Romanesques by Edmond Rostand. He was appointed as the 354th sociétaire in 1914 and entered the reading committee in 1925. In the same year he als became teacher of declamation at the Paris Conservatory, where he had not been accepted as pupil by the way. Bernard was appointed officer in the Legion of Honour in 1934. He was also chair of the Association des artistes dramatiques and of the home of Couilly-Pont-aux-Dames.

In 1911 Léon Bernard debuted as actor in French silent film, probably in the short Pathé production Madame Tallien (Camille de Morlhon, 1911), based on Victorien Sardou’s play and starring Berthe Bovy. In the early 1910s he had a fertile screen acting career at Pathé, in particular under the direction of Albert Capellani. He acted in many short historical and modern dramas by Capellani, such as Anna Karénine (1912), Manon Lescaut (1912), and Le nabab (1913), as bishop Myriel. 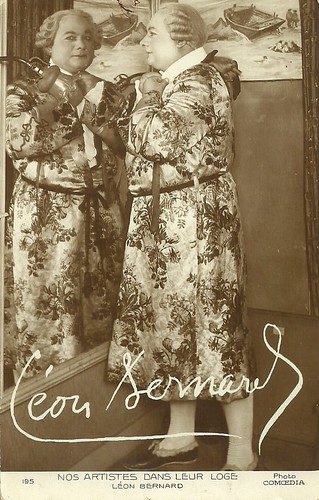 In the 1920s, Bernard had the lead as the title character in Papa Bon Coeur/Daddy Good-Heart (Jacques Grétillat, 1921). Bernard is an orchestra leader at the Opera who degrades to musician at a cinema. His wife (Jeanne Bucy) has run off with their daughter to a count (Pierre Magnier), whose wife dies under suspect circumstances. Ten years after the daughter (Yvonne Sergyl) suspects the countess is murdered and meets her real father. Together with the daughter’s boyfriend (Emile Drain), Papa Bon Coeur unmasks the count as the murderer. Apparently Pierre Blanchar had his first film part in this film. 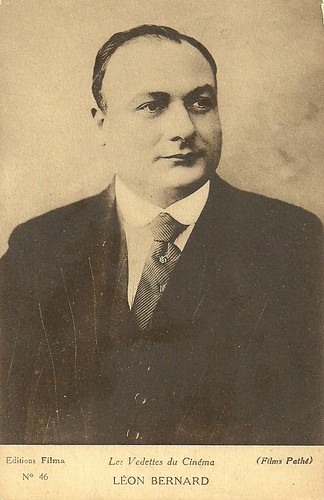 The Son-in-law of Mr. Poirier

Years later, after sound cinema had arrived in France, Léon Bernard returned to the set for two last films. First he had he lead as Mr. Poirier in Marcel Pagnol’s Le gendre de Monsieur Poirier/The son-in-law of Mr. Poirier(1933), based on a play by Émile Augier and scripted by Pagnol himself.

During the reign of Louis-Philippe, Gaston de Presles (Jean Debucourt), the son-in-law of the rich bourgeois Mr. Poirier (Bernard), is a spoiled aristocrat, who has married to solve his debts. In the meanwhile the businessman Poirier hopes he can buy the title of ‘pair de France’. Gaston and Poirier constantly fight each other. In the end Gaston decides to change his life and dedicate himself to his wife (Annie Decaux) and his work.

In anticipation of the success of his bachelor son Jacques (Robert Scipion), Mr. Pelletier is preparing a late dinner that the two men will taste face to face. The arrival of Mrs. Blandin (Gabrielle Robinne), mistress of Mr. Pelletier, complicates things, but he manages to turn her away kindly. Jacques finally arrives. He missed his examination and tension rises between father and son. Bitter and resigned, Pelletier sits alone at the table.

At the age of 58, Léon Bernard died of sepsis after a whitlow in 1935. He lies buried in the cemetery of Montparnasse.