Isabella Rossellini (1952) is an Italian actress, filmmaker, and model. She is noted for her 14-year tenure as a Lancôme model, and for her roles in films such as Blue Velvet (1986) and Death Becomes Her (1992). 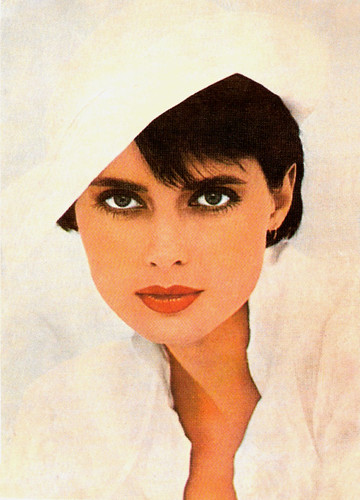 Portrait of a Woman


Isabella Fiorella Elettra Giovanna Rossellini was born in Rome, Italy, in 1952. She was born cinema royalty as the daughter of Swedish-born, three-time Oscar-winning actress Ingrid Bergman and Italian director Roberto Rossellini. She has three siblings from her mother: her twin sister Isotta Ingrid Rossellini, who is an adjunct professor of Italian literature; a brother, Robertino Ingmar Rossellini; and a half-sister, Pia Lindström, who formerly worked on television and is from her mother's first marriage with Petter Lindström. She has four other siblings from her father's two other marriages: Romano (died at age nine), Renzo, Gil, and Raffaella.

Rossellini was raised in Rome, as well as in Santa Marinella and Paris. At 19, she went to New York, where she attended Finch College, while working as a translator and a RAI television reporter. She also appeared intermittently on L'altra Domenica (The Other Sunday), a TV show featuring Roberto Benigni.

Rossellini made her film debut with a brief appearance as a nun opposite her mother and Liza Minnelli in A Matter of Time (Vincente Minnelli, 1976). Her first leading role was in the film drama Il Prato/The Meadow (Paolo and Vittorio Taviani, 1979), opposite Michele Placido and Saverio Marconi. For this role Rossellini was awarded by the association of Italian film critics with a Nastro d'Argento (Silver Ribbon) for Best New Actress.

It was followed by a part in the comedy Il pap'occhio/In the Pope's Eye (Renzo Arbore, 1980) with Roberto Benigni and film director Martin Scorsese. The film was heavily attacked by the Catholic press. Three weeks later it was confiscated "for insulting the Catholic religion and the person of the Holy Pope". However, the film grossed 5 billion lire being the 5th best grossing film in Italy in the 1980/1981 season. In 1979, she had married Scorsese and went to live with him in New York. They divorced in 1982.

At the age of 28, her modelling career began, when she was photographed by Bruce Weber for British Vogue and by Bill King for American Vogue. During her career, she also worked with many other renowned photographers, including Richard Avedon, Steven Meisel, Helmut Newton, Francesco Scavullo, Annie Leibovitz, and Robert Mapplethorpe. Her image has appeared on such magazines as Marie Claire, Harper's Bazaar, Vanity Fair, and ELLE.

In March 1988, an exhibition dedicated to photographs of her, called Portrait of a Woman, was held at the Musee d'Art Moderne in Paris. Rossellini's modelling career led her into the world of cosmetics, when she became the exclusive spokes model for the cosmetics brand Lancôme in 1982. In 1996, when she was 44, she was removed as the face of Lancôme for being ‘too old.’ A year earlier, Rossellini had worked with the Coty Group and developed her own brand of cosmetics, Isabella Rossellini's Manifesto. 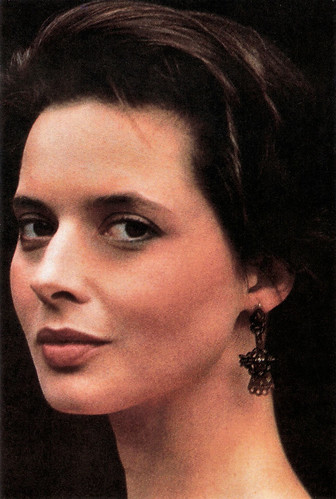 
Following her mother's death in 1982, Isabella Rossellini was cast in her first American film, the Cold War drama White Nights (Taylor Hackford, 1985), starring Mikhail Baryshnikov. This was followed by her notable role as the tortured nightclub singer Dorothy Vallens in David Lynch’s masterpiece Blue Velvet (1986), in which she also contributed her own singing. For this part she earned an Independent Spirit Award for Best Female Lead.

Other significant film roles during this period include her work in the comedy Cousins (Joel Schumacher, 1989), the crime thriller Wild at Heart (David Lynch, 1990), the black comedy fantasy Death Becomes Her (Robert Zemeckis, 1992) with Meryl Streep, Fearless (Peter Weir, 1993) with Jeff Bridges, and Immortal Beloved (Bernard Rose, 1994) about the life of composer Ludwig van Beethoven (played by Gary Oldman).

In 1992, Rossellini modelled for Madonna's controversial book Sex. She also appeared in Madonna's music video for her hit song Erotica (1992). In 1996, she appeared as herself in an episode of the TV series Friends called The One With Frank Jr. That same year, she was nominated for a Golden Globe for her performance in Crime of the Century (Mark Rydell, 1996), a dramatisation of the Lindbergh kidnapping.

In Europe, she made the Dutch drama Left Luggage (Jeroen Krabbé, 1998), and the multimedia project The Tulse Luper Suitcases (Peter Greenaway, 2003-2004). Rossellini was a recurring character on the television series Alias (2003) and she also appeared in the Canadian film The Saddest Music in the World (Guy Maddin, 2003). In 2004, she played the High Priestess Thar in the Sci-Fi Channel miniseries Legend of Earthsea (Robert Lieberman, 2004).

My Dad Is 100 Years Old (Guy Maddin, 2006) is a tribute that Rossellini created for her father. In the film, she played almost every role, including Federico Fellini, Alfred Hitchcock, and her mother Ingrid Bergman. In 2007, Rossellini guest starred on two episodes of the television show 30 Rock, playing Alec Baldwin's character's ex-wife.

Rossellini acted in the Canadian-Spanish psychological thriller Enemy (Denis Villeneuve, 2013), alongside Jake Gyllenhaal. She also played silent film actor Rudolph Valentino's mother in Silent Life (Vlad Kozlov, 2012). Rossellini has written three books: her self-described fictional memoir, Some of Me (1997), Looking at Me (on pictures and photographers, 2002), and In the name of the Father, the Daughter and the Holy Spirits: Remembering Roberto Rossellini (2006).