Italian actress Nicoletta Braschi (1960) is best known for the acclaimed film La vita è bella (1997), in which she co-starred with her husband Roberto Benigni. 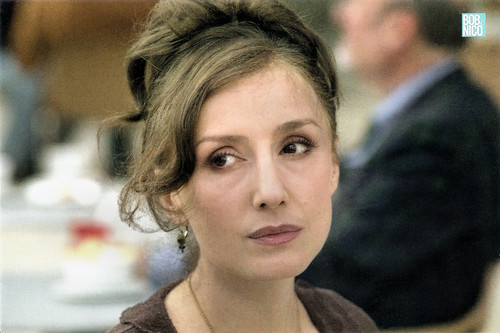 
Nicoletta Braschi was born on April 19, 1960 in Cesena, Emilia-Romagna, Italy. Braschi studied in Rome's Academy of Dramatic Arts where she first met Roberto Benigni in 1980.

Her film debut was the anthology comedy Tu Mi Turbi/You Upset Me (Roberto Benigni, 1983) in which she played the Virgin Mary. It was also the directorial debut of Benigni and the first film in which they co-starred.

Next she appeared in the American film Down by Law (Jim Jarmusch, 1986). The film centres on the arrest, incarceration, and escape from jail of three men (Tom Waits, John Lurie and Roberto Benigni). The trio eventually chance across a house in the forest, the residence of Nicoletta (Braschi). Bob (Benigni) and Nicoletta instantly fall in love, and Bob decides to stay with her in the forest.

She also appeared in Benigni’s comedy Il piccolo diavolo/The Little Devil (Roberto Benigni, 1988). Benigni stars as a little devil Giuditta who follows Father Maurice (Walther Matthau) and often gets him into trouble. Braschi plays another little devil who manages to attract Giuditta who finally leaves Maurice and follows her ‘elsewhere’.

She again worked with Jim Jarmusch on a segment of the American anthology film Mystery Train (Jim Jarmusch, 1989). She appeared in the segment A Ghost as an Italian widow stranded in Memphis, Tennessee overnight. Braschi also played a supporting part in the British-Italian drama The Sheltering Sky (Bernardo Bertolucci, 1990), based on the 1949 novel by Paul Bowles. 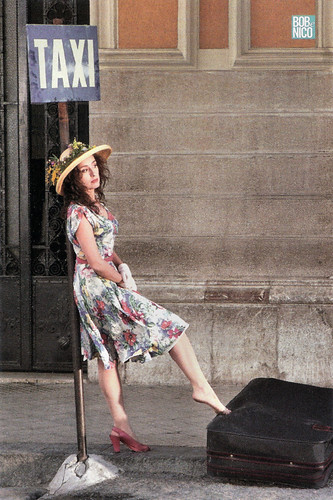 
In 1991, Nicoletta Braschi married Roberto Benigni. With her husband she then starred in one of their most successful collaborations, the comedy Johnny Stecchino (Roberto Benigni, 1992). She played Maria, the girlfriend of Johnny Stecchino, an Italian mobster. She meets a quirky school bus driver for students with Down syndrome, who bears a striking resemblance to her husband who is wanted by Sicilian mobsters for treason and murder.

Maria plans to trick the mobsters to kill Dante thinking he is Stecchino. The film takes several unexpected twists when Maria begins to fall for Dante, and it becomes clear that Dante cannot possibly be the cold blooded killer Stecchino. During its release in 1991, it was the highest grossing film in Italy.

She had a small part in Son of the Pink Panther (Blake Edwards, 1993) is a continuation of the The Pink Panther film series. Roberto Benigni starred as Inspector Clouseau's illegitimate son. Also in this film are Panther regulars Herbert Lom, Burt Kwouk and Graham Stark and a star of the original 1963 film, Claudia Cardinale. However, Son of the Pink Panther failed to generate critical or commercial success, the loss of Peter Sellers as Clouseau proving once again to be too great.

A huge success in Europe was the Italian-French comedy Il mostro/The Monster (Roberto Benigni, 1994) starring Benigni as a man who is mistaken by police profilers for a serial killer due to a misunderstanding of the man's strange behaviour. Braschi played an attractive police officer, who goes undercover as his roommate. This film was, at the time it came out, the highest-grossing film in Italy.

In 1997 Nicoletta Braschi starred in the comedy Ovosodo/Boiled Egg (Paolo Virzi, 1997) as a depressed teacher encouraging a student to work and study harder. The film won her a David di Donatello award (Italy's equivalent of the Oscars) and much praise from critics and the public. 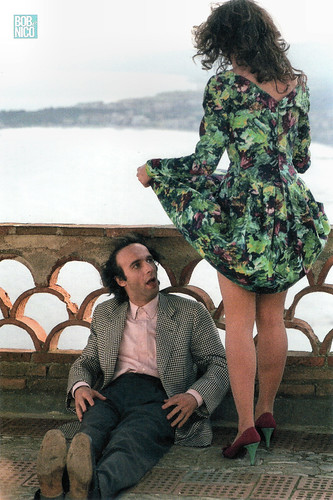 
Nicoletta Braschi’s biggest success was La Vita è Bella/Life is Beautiful (Roberto Benigni, 1998). Braschi played the wife of an Italian Jew (Benigni) imprisoned in a concentration camp. Part of the film came from Benigni's own family history; before Roberto's birth, his father had survived three years of internment at the Bergen-Belsen concentration camp.

Braschi played the Blue Fairy in Pinocchio (Roberto Benigni, 2002), based on The Adventures of Pinocchio by Carlo Collodi with Benigni portraying Pinocchio. In the United States, Pinocchio was lambasted by critics, in particular for the English dub. The original Italian version was not so poorly greeted and received six nominations at the David di Donatello Awards, winning two, as well as winning one of the two awards it was nominated for at the Italian National Syndicate of Film Journalists.

In 2002, Braschi was a member of the jury at the Berlin Film Festival. In 2005 she starred in and produced La tigre e la neve/The Tiger and the Snow (Roberto Benigni, 2005), a love story set during the initial stage of the Iraq War. This was her last film till now.

In 2010 Nicoletta Braschi toured the Italian theatres starring in Tradimenti, based on Harold Pinter's play Betrayal. 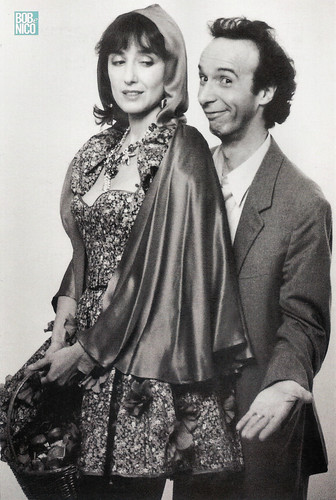