Imported from the USA: Kim Novak

American film and television actress Kim Novak (1933) starred in such popular successes as Picnic (1955), The Man with the Golden Arm (1955) and Pal Joey (1957). However, she is perhaps best known today for her ‘dual role’ as both Judy Barton and Madeleine Elster in Alfred Hitchcock's classic thriller Vertigo (1958). She withdrew from acting in 1966, but returned sporadically in European films. 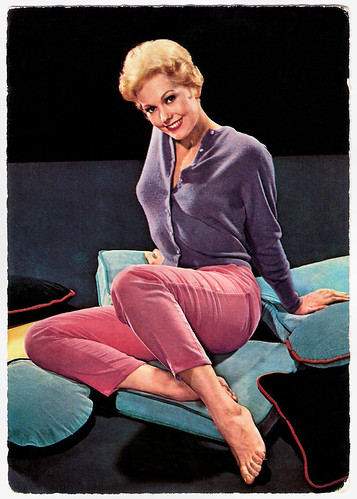 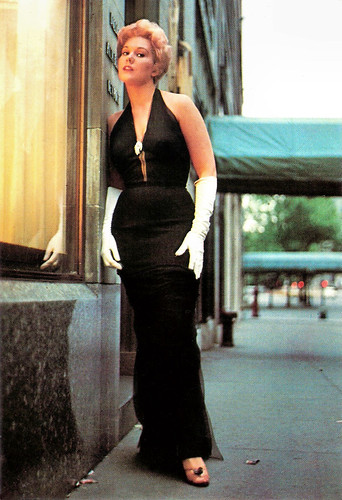 Spanish postcard by Postal Oscarcolor, no. 372. 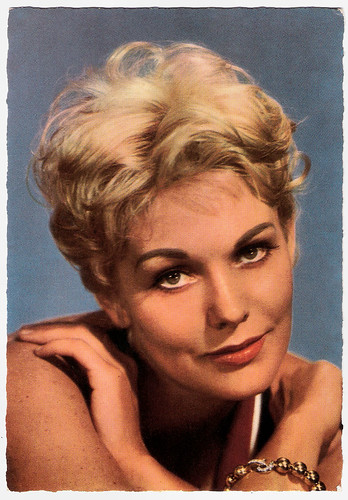 Kim Novak was born as Marilyn Pauline Novak, professionally in Chicago, Illinois in 1933. She is the daughter of history teacher Joseph Novak and factory worker Blanche (née Kral) Novak.

She won two scholarships to the School of the Art Institute of Chicago, and during the summer break in her last semester of junior college, Novak went on a cross-country tour modeling for a refrigerator company at trade shows. While stopping by Los Angeles, Novak was crowned Miss Deepfreeze by the refrigerator company.

While there, she and two other models stood in line to be extras in The French Line (Lloyd Bacon, 1954), a film starring Jane Russell. It was here that she was discovered by an agent, who signed her to a long-term contract with Columbia Pictures. Columbia intended for Novak to be their successor to Rita Hayworth, their biggest star of the 1940s, whose career had declined. The studio also hoped that Novak would bring them the same success 20th Century-Fox was having with Marilyn Monroe.

Her first role for the studio was in the film noir Pushover (Richard Quine, 1954). She then co-starred in the romantic comedy Phffft! (Mark Robson, 1954) as Janis, a Monroe-type character who finds Jack Lemmon's character, Robert Tracey, "real cute". Both films were reasonably successful at the box office, and Novak received favorable reviews for her performances.

The film version of Picnic (Joshua Logan, 1955), co-starring William Holden, was a resounding critical and box office triumph. Novak won a Golden Globe Award for Most Promising Newcomer. She was also nominated for BAFTA Film Award for Best Foreign Actress, but did not win. Director Otto Preminger then cast her in The Man with the Golden Arm (1955), in which she played Frank Sinatra's sultry ex-girlfriend. The film was a box office triumph.

After appearing in a series of successful movies, Novak became one of the biggest box office draws. Columbia placed her in a film adaptation of Pal Joey (George Sidney, 1957). She played Linda English, a naive showgirl, opposite Frank Sinatra and Rita Hayworth. The movie was a box office hit and has been considered one of Novak's better performances. 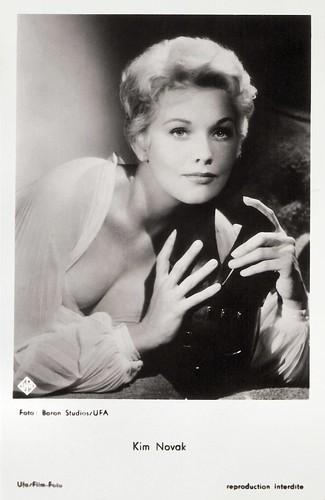 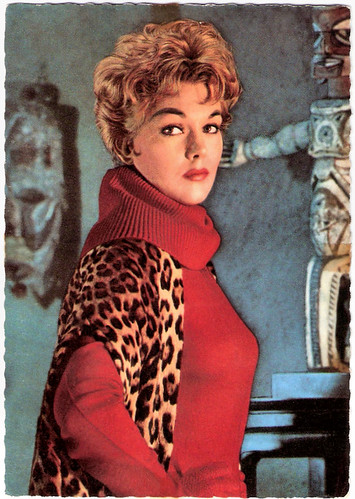 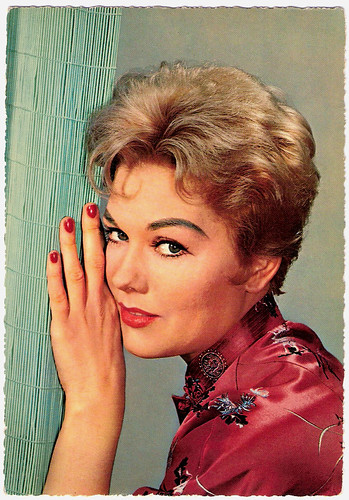 Kim Novak is perhaps best known today for the classic thriller Vertigo (Alfred Hitchcock, 1958), opposite James Stewart. During the production, Novak was striking for more money from Columbia, and refused to show up for work on the Vertigo set to protest her salary of $1,250 a week. Novak hired new agents to represent her and demanded an adjustment in her contract. Harry Cohn of Columbia suspended her but, after a few weeks of negotiations, he relented and offered her a new contract worthy of a major star. Vertigo was poorly received at the time of its release in 1958 and failed at the box office, but has since been re-evaluated and is widely considered one of the director's best works.

Sandra Brennan at AllMovie: "In 1958, Novak appeared in her most famous role, that of enigmatic Madeleine in Alfred Hitchcock's masterpiece Vertigo. It was a difficult role, but one she rose to admirably. She did have one conflict with Hitchcock on the set concerning the stiff gray suit and black shoes she would be required to wear for most of the picture. When she saw costume designer Edith Head's original plans for the suit, Novak, fearing the suit would be distracting and uncomfortable and believing that gray is seldom a blonde's best color, voiced her concerns directly to Hitchcock who listened patiently and then insisted she wear the prescribed garb. Novak obeyed and to her surprise discovered that the starchy outfit enhanced rather than hindered her ability to play Madeleine."

In 1958, Novak again worked with Stewart in Richard Quine's Bell, Book and Candle, a comedy tale of modern-day witchcraft, that proved to be a box office success. The following year, she starred opposite Fredric March in the acclaimed drama Middle of the Night (Delbert Mann, 1959), and opposite Kirk Douglas in Strangers When We Meet (Richard Quine, 1960).

Although still young, her career declined in the early 1960s, and after several years in a series of lackluster films, she withdrew from acting in 1966. She has only sporadically returned since. She returned to the screen in the West-German film Schöner Gigolo, armer Gigolo/Just a Gigolo (David Hemmings, 1978), starring David Bowie, and the British mystery The Mirror Crack'd (Guy Hamilton, 1980), based on the story by Agatha Christie. She also had a regular role on the prime time TV series Falcon Crest (1986–1987).

After a disappointing experience during the filming of the mystery Liebestraum (Mike Figgis, 1991), Kim Novak has permanently retired from acting, citing she has no desire to return. In 2013, she attended the 2013 Cannes Film Festival where she introduced a new restored version of Vertigo. Audiences gave Novak a standing ovation.