British actor and director Ray Milland (1905-1986) had a screen career that ran from 1929 to 1985. He appeared in many Hollywood movies as the archetypal, unflappable British gentleman. Milland is best remembered for his gut-wrenching, Academy Award–winning portrayal of an alcoholic writer in The Lost Weekend (1945), the murder-plotting husband in Dial M for Murder (1954), and as The Man With the X-ray Eyes (1963). 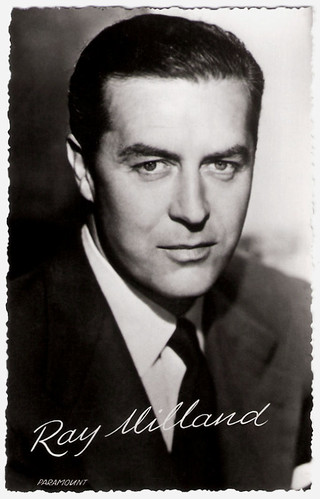 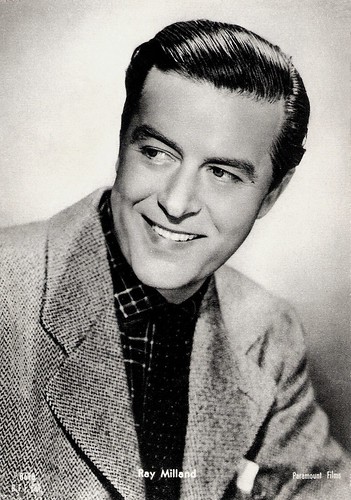 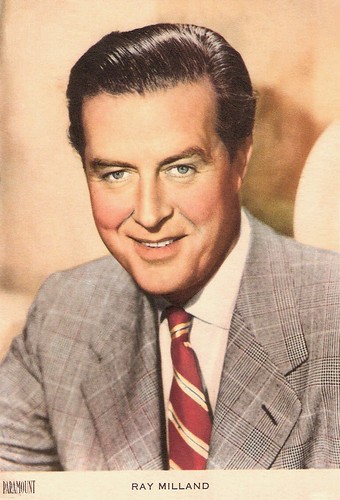 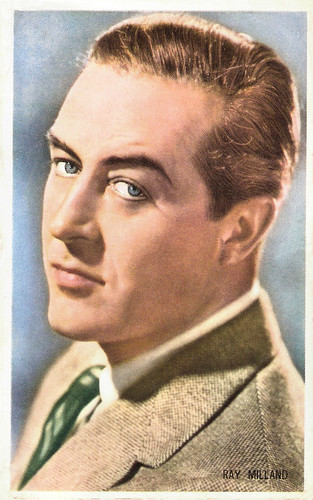 Discovered by a Hollywood Talent Scout


Ray Milland was born Reginald Alfred John Truscott-Jones on a mountain called Cymla, above the town of Neath in Wales in 1905. Milland was the son of Alfred Jones and Elizabeth Annie (née Truscott). As a child, he took the name of his stepfather, Mullane, and was known in his early career as Jack Mullane. He later took his stage name Raymond Milland from the flat area of land called the mill lands in Neath, which he remembered fondly from his youth.

In 1925, Milland enlisted as a guardsman with the Royal Household Cavalry in London. As part of his training, he became skilled in fencing, boxing, horsemanship and marksmanship. An expert shot, he became a member of his company's rifle team, winning many prestigious competitions, including the Bisley Match in England.

When his duty service was completed in 1928, Milland stumbled into acting when a British filmmaker spotted him at a party and offered the 22-year-old a bit part in the romance The Plaything (Castleton Knight, 1929). More small and big roles in the British cinema and on stage followed. Among his British films were the silent ‘backstage’ drama Piccadilly (Ewald André Dupont, 1929) starring Anna May Wong, the adventure The Flying Scotsman (Castleton Knight, 1929) and the drama The Informer (Arthur Robison, 1929).

Raymond Milland was discovered by a Hollywood talent scout while performing on the stage in London, and travelled to America under a short-term contract with MGM. MGM shortened his first name to Ray and continued casting the acting novice in minor supporting roles.

MGM agreed to loan him out for more substantial parts in Will Rogers' Ambassador Bill (Sam Taylor, 1931) at Fox in which he tries to overthrow the boy-king of a fictional European country, and Warner Bros.' Blonde Crazy (Roy Del Ruth, 1931) in which he competes with con-artist James Cagney for Joan Blondell's affections. 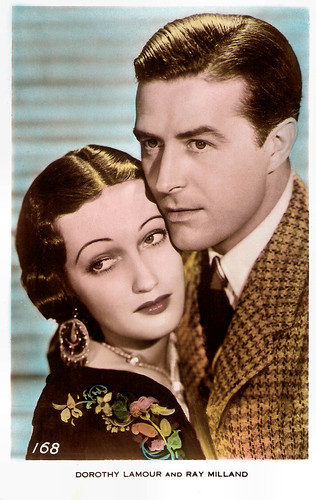 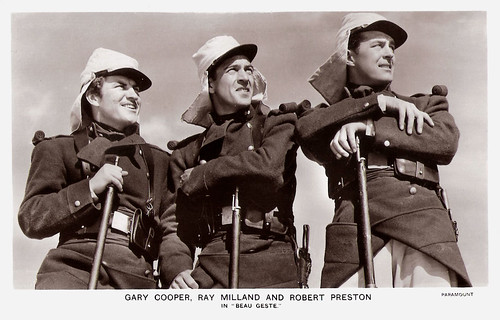 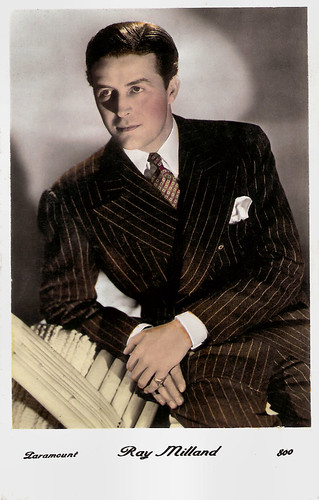 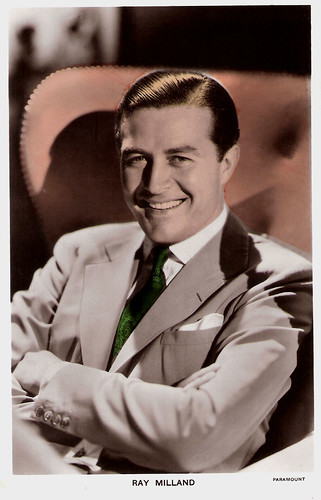 
When his contract with MGM expired, Ray Milland bounced around taking whatever roles he could get, including a supporting part in Fox's Charlie Chan in London (Eugene J. Forde, 1934). He returned to England for roles in This Is the Life (Albert de Courville, 1933) with Gordon Harker and the comedy Orders is Orders (Walter Forde, 1934), a satire on Hollywood movie-making.

Finally, based on the strength of two films he made with Carole Lombard - Bolero (Wesley Ruggles, 1934) and We’re Not Dressing (Norman Taurog, 1934) - as well as the endorsement of his leading lady, Paramount Pictures signed Milland to a long-term contract. He would remain with the studio for some twenty years.

Charming and debonair, he can be seen as suave, self-assured romantic leading man in a number of excellent drawing-room comedies, mysteries and adventures, including The Big Broadcast of 1937 (Mitchell Leisen, 1936), The Jungle Princess (William Thiele, 1936) featuring Dorothy Lamour, Beau Geste (William Wellman, 1939) with Gary Cooper, and I Wanted Wings (Mitchell Leisen, 1941) with Veronica Lake.

At Film Reference, Frank Thompson writes: “The quintessential Milland performances of the ‘leading man’ variety are contained in Leisen's delightful Easy Living and Kitty. The darker, more sinister side of his personality first came to the fore in Farrow's Alias Nick Beal, a film in which Milland plays the Devil himself.”

Easy Living (Mitchell Leisen, 1937) was a depression-era screwball comedy and social satire written by Preston Sturges and starring Jean Arthur. Reel Classics calls it “an often-overlooked delight”. Kitty (1945, Mitchell Leisen) was a variation on Pygmalion, in which a London aristocrat (Milland) takes it upon himself to make a lady of a guttersnipe (Paulette Goddard).

Milland had a terrible accident during the filming of Hotel Imperial (Henry Hathaway, 1939) with Isa Miranda, when, taking his horse over a jump, the saddle-girth broke and he landed head-first on a pile of bricks. His most serious injuries were a concussion that left him unconscious for 24 hours, a 3-inch gash in his skull that took 9 stitches to close, and numerous fractures and lacerations on his left hand.

When the Second World War began, Milland tried to enlist in the U.S. Army Air Forces, but was rejected because of his impaired left hand. He worked as a civilian flight instructor for the Army, and toured with a United Service Organisation (USO) South Pacific troupe in 1944. 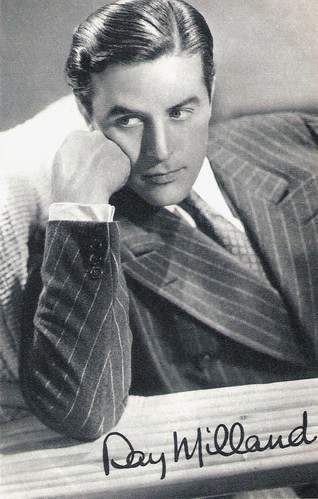 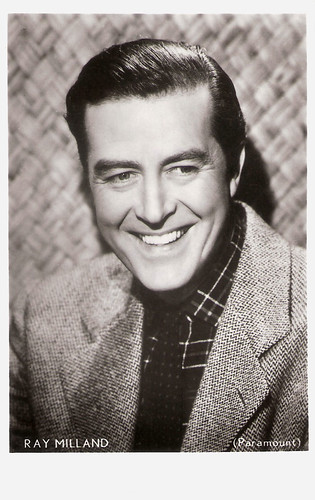 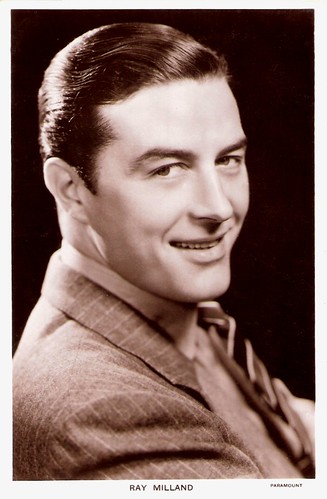 British postcard in the Picturegoer Series, London, no. 991b. Photo: Paramount. 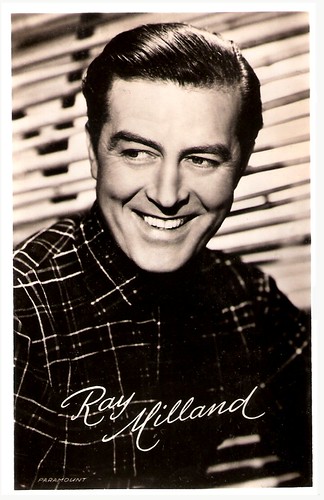 An Alcoholic Trying To Kick the Booze


Ray Milland had made over 60 feature films by the time he won an Oscar for his portrayal of an alcoholic trying to kick the booze in Billy Wilder's The Lost Weekend (1945). It would be pinnacle of Ray Milland's career and an acknowledgement of his serious dramatic abilities. The surprise shown by the critical establishment at Milland's proficiency in the role suggests that nothing much had ever been expected of him.

Milland was the first Welsh actor to ever win an Oscar. He was also the first actor not to have spoken a single word during his acceptance speech, preferring to simply bow his appreciation before casually walking to the stage exit. For this performance, he was also given an award at the first Cannes Film Festival.

Five years later, he gave a strong performance in Close to My Heart (William Keighley, 1951), starring with Gene Tierney as a couple trying to adopt a child. As Milland grew older and his value as a romantic lead began to wane, the more sinister aspects of this self-assuredness became more evident.

In 1954, he starred as the suave and mannerly accomplice opposite Grace Kelly in Dial M for Murder (Alfred Hitchcock, 1954). Other films that exploited the murderous glint in Milland's eloquent eyes include The Thief (Russel Rouse, 1951) a Film Noir without any dialogue, and The Girl in the Red Velvet Swing (Richard Fleischer, 1955) with Joan Collins.

He made many television appearances. He starred as a professor in the CBS sitcom Meet Mr. McNutley (1953-1955). The program was renamed in its second season as The Ray Milland Show. From 1959–1960, he starred in the CBS detective series Markham. In the late 1960s, he hosted rebroadcasts of certain episodes of the syndicated western anthology series, Death Valley Days under the title Trails West. 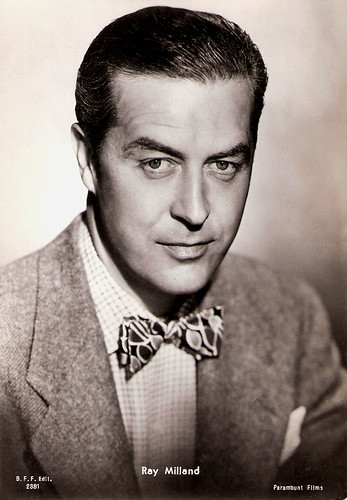 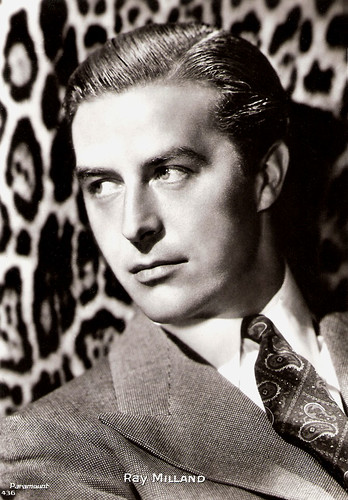 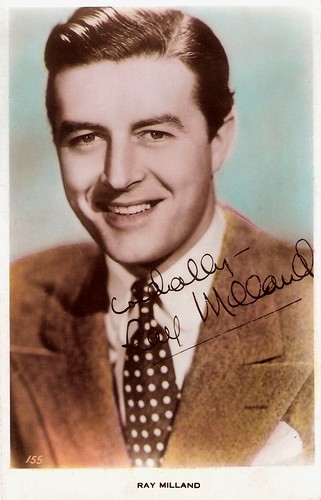 British postcard by Real Photograph, no. 155.


In 1955, Ray Milland started directing films, such as the western A Man Alone (Ray Milland, 1955) with Raymond Burr, and the well-paced espionager Lisbon (1956, Ray Milland) with Maureen O’Hara for Republic Pictures that he also produced and starred in. He did it with surprising proficiency, but the films failed to make him successful. He achieved more success with directing for television. According to Kit and Morgan Benson at Find A Grave, he “was considered a solid and capable director and producer.”

Milland returned as a film character actor in such fascinating low-budget horror films as The Premature Burial (Roger Corman, 1962) and The Man with the X-ray Eyes (Roger Corman, 1963), the latter providing Milland with the wittiest, most energetic role of his later career. He appeared in the TV classic Daughter of the Mind (Walter Grauman, 1969) in which he was reunited with Gene Tierney, and he played Ryan O'Neal's father in the hit tearjerker Love Story (Arthur Hiller, 1970).

He can also be seen in such dreadful horror films as The Thing with Two Heads (Lee Frost, 1972), the British Crazy House/The House in Nightmare Park (Peter Sykes, 1973), and Terror in the Wax Museum (Georg Fenady). One of the best of that bad lot is Frogs (George McCowan, 1972), a surprisingly enjoyable entry from the ‘nature-run-amok’ horror subgenre.

Milland wrote an autobiography, Wide Eyed in Babylon, published in 1974. Toward the end of his life, he guest starred in TV series as Battlestar Galactica (Glen A. Larson, 1978-1979) and the Harold Robbins’ adaptation The Dream Merchants (Vincent Sherman, 1980).

His last film was the Spanish fantasy-adventure The Sea Serpent (Gregory Greens, 1986) with Timothy Bottoms, after which his declining health forced him to retire. A book-loving homebody, Milland kept away from the Hollywood glitter and was rarely mentioned in the gossip columns.

At 81, he died of lung cancer in Torrance, California in 1986. He was survived by his wife, Muriel ‘Mal’ Weber, to whom he had been married since 1932. They had a son, Daniel, and an adopted daughter, Victoria. Frank Thompson at Film Reference: “Hollywood never quite knew what it had in Ray Milland, but he continuously showed himself to be an adventurous artist, always interested in exposing his established image to radical and surprising lights.” 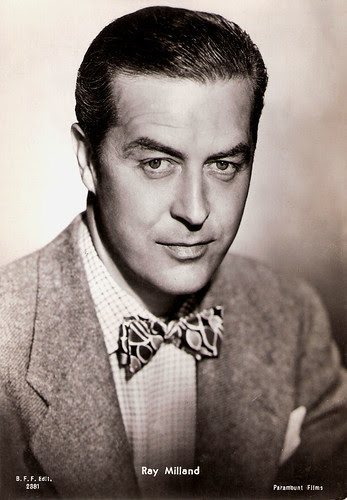 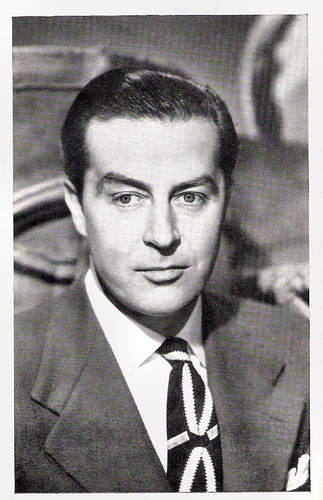