Austrian actor Hans Moser (1880–1964) appeared in over 150 films. During his long career, from the 1920s up to his death, he became very popular as the mumbling factotum in comedy films. Moser was particularly associated with the genre of the Wiener filme. 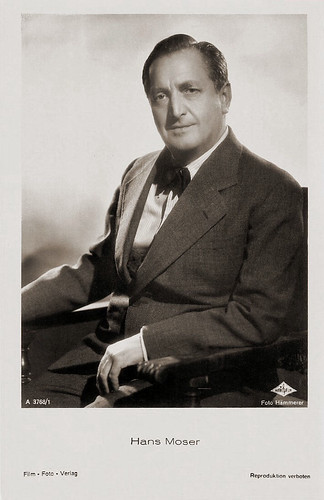 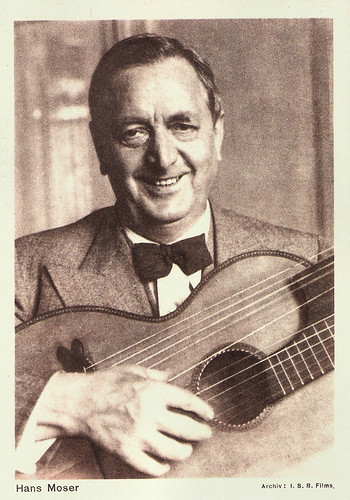 Hans Moser was born Johann Julier in Vienna, Austria-Hungary (now Austria) in 1880. He was the third child of Academic sculptor Franz Julier and his wife Serafina, born Pöschl.

He grew up in the Margarethen district, attended secondary and commercial school and worked in accounting of a leather goods store in Vienna before he took paid acting lessons at Otto theatre school for a short period. Then he took language lessons from Josef Moser, a character player at the Vienna Court Theater. Julier decided to borrow his name and from then on he used as his stage name: Hans Moser.

In 1897, the 17-year-old Moser got his first theatre engagement and played smaller parts on different stages during the next years. Because of his shortness he often impersonated children. Moser returned to Vienna in 1910 where he married Blanca Hirschler the following year. In 1913, their daughter Margarethe was born.

From 1914 to 1918, he was a soldier and was deployed to the east front and to Isonzo, North Italy. After the war he became established as a character comedian and he played in the major theatres. In 1925 Max Reinhardt engaged him for Theater in der Josefstadt. Moser also performed at the Salzburg Festival between 1925 and 1927.

This did not change when the sound film was introduced. He played minor parts beside established Berliner comedians. In 1933 the tide turned in his favour when Willi Forst directed the first ‘Wiener filme’ (Viennese films).

In such films as Leise flehen meine Lieder/Lover Divine (Willi Forst, 1933) and Maskerade/Masquerade in Vienna (Willi Forst, 1934) audiences accepted Moser's mumble and nervous movements, and started to love it. In fact Moser became known for mumbling indistinctly for comic effect rather than pronouncing words and sentences clearly, and also for failing to finish his sentences. 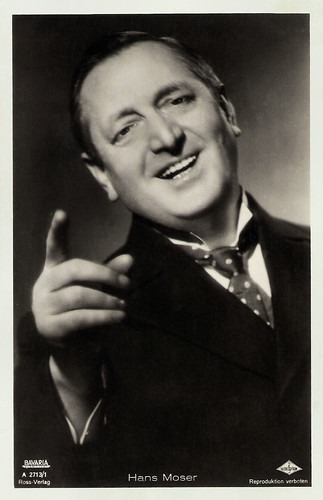 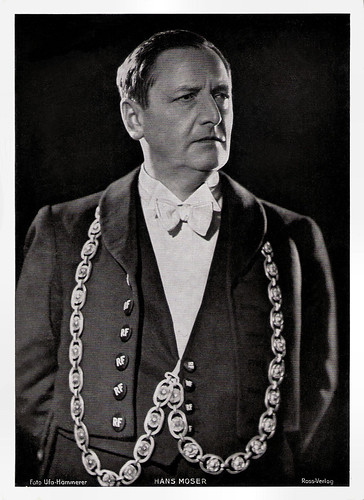 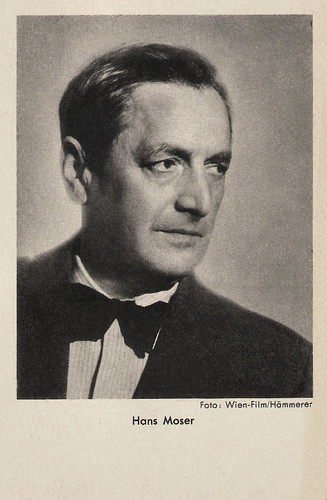 During the 1930s Hans Moser focused more and more on his film career and appeared less in the theatre. He often portrayed the man in the street, typically someone else's subordinate – servant, waiter, porter, shopkeeper, coachman, petty bureaucrat, etc.

Also always he played honest, moral and well-intentioned people who, unable to keep cool and think clearly in crucial situations, get themselves and everyone around them into all kinds of trouble. As the father of a beautiful daughter – often widowed – he was the stubborn one who realizes only at the end of the film, when all cases of mistaken identity have been cleared up and all secrets are revealed, that he has been terribly wrong all the time.

In these films Moser was the contrast to the composed North Germans Theo Lingen and Heinz Rühmann and fought out skirmishes with Adele Sandrock and Ida Wüst. Together with Paul Hörbiger, he headed the Viennese clan of film comedians that included Oskar Sima, Annie Rosar, Rudolf Carl, Leo Slezak, and Lucie Englisch. With Annie Rosar, he starred in seventeen films between 1933 and 1957. 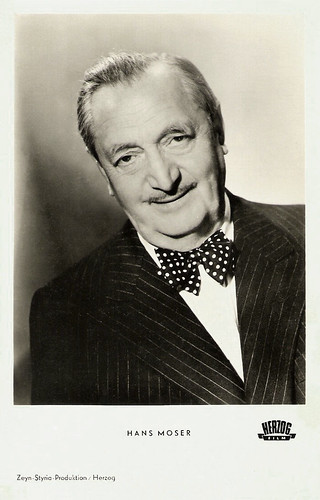 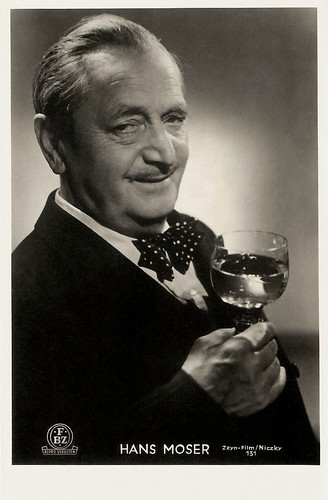 During the Nazi regime, Moser had severe problems. His wife Blanca Hirschler was Jewish, and he refused to divorce her. It was only because of his great popularity that the regime allowed him to continue to appear in films. From 1933 he depended on a special work permission. His wife fled to Hungary in 1939 to avoid further trouble. After the war the couple reunited.

The quality of these films was not up to the standard of his films of the 1930s, and his star slowly began to sink. Only films like Ober, zahlen!/Waiter, the check! (E.W. Emo, 1957) and above all Herrn Josefs letzte Liebe/Mr. Josef’s last love (Hermann Kugelstadt, 1959) presented him again in his old top form.

Moser accepted unscrupulous nearly each film role he was offered and he had to make his jokes now with comedians of a new generation like Georg Thomalla, Trude Herr and Gunther Philipp. His film career ended in shallowness.

In the theatre Moser was also working as a serious actor, such as in Arthur Schnitzler’s play Liebelei (The Reckoning) – his first ever role in a production of Vienna’s Burgtheater that premiered in 1954, and was directed by Ernst Lothar.

Moser made his last stage performance in 1963, as a divine police law clerk in a production of Ferenc Molnár’s Liliom, directed by Kurt Meisel.

Hans Moser died of cancer in Vienna in 1964, aged 83. His continuing popularity is attested to by the fact that his style of speaking is still being parodied, often by very young entertainers. 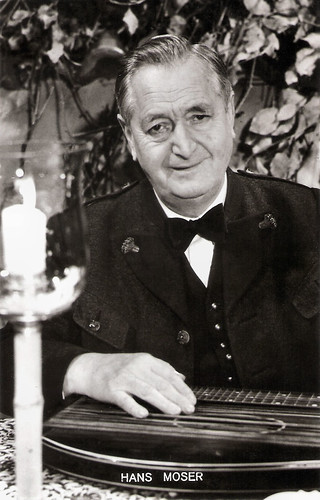 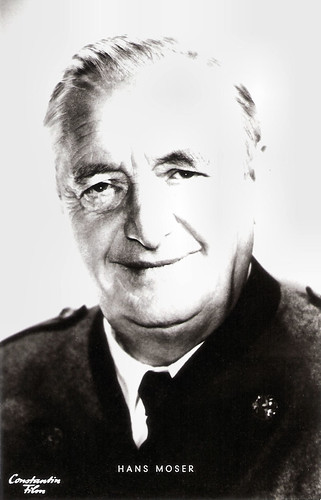 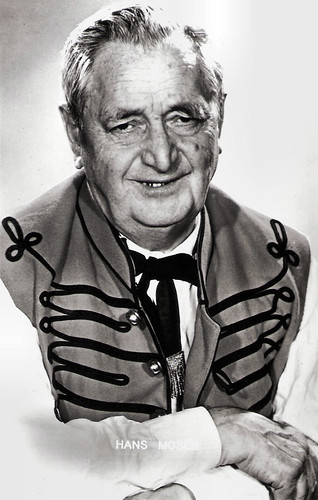