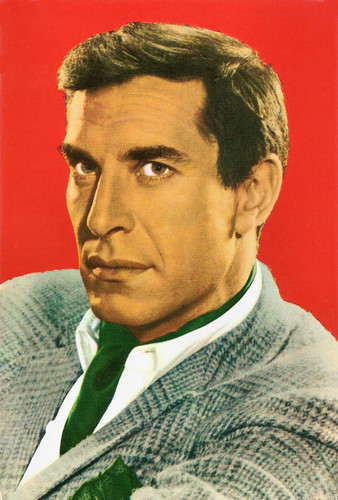 
Martin Landau was born in 1928 in Brooklyn, New York. His parents were Majer Joel (Morris) Landau and Selma Buchman. At age 17, Martin was hired by the New York Daily News as a staff cartoonist and illustrator. In his five years on the paper, he served as the illustrator for Billy Rose's Pitching Horseshoes column. He also worked for cartoonist Gus Edson on The Gumps comic strip.

Landau's major ambition was to act, and in 1951, he made his stage debut in Detective Story in Peaks Island, Maine. He made his off-Broadway debut that year in First Love. Landau was one of 2000 applicants who auditioned for Lee Strasberg's Actors Studio in 1955 - only he and Steve McQueen were accepted. Landau was a friend of James Dean and McQueen, in a conversation with Landau, mentioned that he knew Dean and had met Landau. When Landau asked where they had met, McQueen informed him he had seen Landau riding into the New York City garage where he worked as a mechanic on the back of Dean's motorcycle.

He acted during the mid-1950s in such television anthologies as Omnibus (1955). He began making a name for himself after replacing star Franchot Tone in the 1956 off-Broadway revival of Anton Chekhov's Uncle Vanya, a famous production that helped put off-Broadway on the New York theatrical map. In 1957, he made a well-received Broadway debut in the play Middle of the Night. As part of the touring company with star Edward G. Robinson, he made it to the West Coast. He also guest-starred in such popular TV series as Maverick (1959), Sugarfoot (1958) and Rawhide (1959).

Martin Landau made his film debut in the war drama Pork Chop Hill (Lewis Milestone, 1959) with Gregory Peck. He scored in his second film as the heavy in Alfred Hitchcock's classic thriller North by Northwest (1959), in which he was shot on top of Mount Rushmore while sadistically stepping on the fingers of Cary Grant, who was holding on for dear life to the cliff face.

He also appeared in the blockbuster Cleopatra (Joseph L. Mankiewicz, 1963), the most expensive film ever made up to that time, which nearly scuttled 20th Century-Fox. It engendered one of the great public scandals, the Elizabeth Taylor-Richard Burton love affair that overshadowed the film itself. Landau's memorable portrayal in the key role of Rufio was highly favoured by the audience and instantly catapulted his popularity.

In 1963, Landau played memorable roles on two episodes of the science-fiction anthology series The Outer Limits (1963). He was Gene Roddenberry's first choice to play Mr. Spock on Star Trek (1966), but the role went to Leonard Nimoy, who later replaced Landau on Mission: Impossible (1966), the show that really made Landau famous. He originally was not meant to be a regular on the series, which co-starred his wife Barbara Bain, whom he had married in 1957.

His character, master impersonator Rollin Hand, was supposed to make occasional, though recurring appearances, but when the producers had problems with star Steven Hill, Landau was used to take up the slack. Rollin Hand was one of the specialists used by the Impossible Missions Force. Hand was described as a “man of a million faces”. Landau's characterisation was so well-received and so popular with the audience that he was made a regular. Landau received Emmy nominations as Outstanding Lead Actor in a Drama Series for each of the three seasons he appeared. In 1968, he won the Golden Globe award as Best Male TV Star.

Eventually, he quit the series in 1969 after a salary dispute when the new star, Peter Graves, was given a contract that paid him more than Landau, whose own contract stated he would have parity with any other actor on the show who made more than he did. The producers refused to budge and he and Bain, who had become the first actress in the history of television to be awarded three consecutive Emmy Awards (1967-1969) while on the show, left the series, ostensibly to pursue film careers. The move actually held back their careers, and Mission: Impossible went on for another four years with other actors. 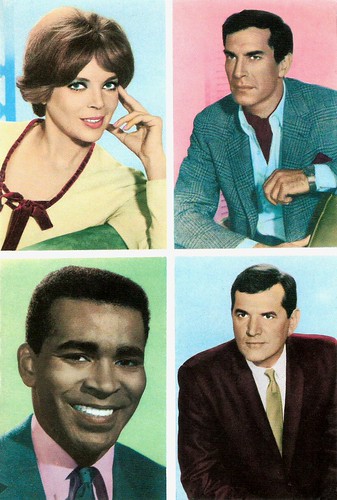 Spanish postcard by Ediciones Este, no. 182, 1967. Martin Landau, Steven Hill, Greg Morris and Barbara Bain were the original stars of the American action series Mission: Impossible (1966–1973), about an elite covert operations unit which carries out highly sensitive missions subject to official denial in the event of failure, death or capture.


Martin Landau appeared in support of Sidney Poitier in They Call Me Mister Tibbs! (Norman Jewison, 1970), the less successful sequel to the Oscar-winning In the Heat of the Night (1967), but it did not generate more work of a similar caliber. He starred in the television movie Welcome Home, Johnny Bristol (George McCowan, 1972), playing a prisoner of war returning to the United States from Vietnam. The following year, he shot a pilot for a proposed show, Savage (1973). Though it was directed by emerging wunderkind Steven Spielberg, NBC did not pick up the show.

Needing work, Landau and Bain moved to England to play the leading roles in the syndicated science-fiction series Space: 1999 (1975-1977). In Europe Landau also appeared in the Giallo Una Magnum Special per Tony Saitta/Shadows in an Empty Room (Alberto De Martino, 1976) with Stuart Whitman and John Saxon. Landau's and Bain's careers stalled after Space: 1999 went out of production, and they were reduced to taking parts in the television movie The Harlem Globetrotters on Gilligan's Island (Peter Baldwin, 1981). It was the nadir of both their careers, and Bain's acting days, and their marriage, soon were over.

Landau, one of the most talented character actors in Hollywood, and one not without recognition, had bottomed out career-wise. In 1983, he was stuck in low-budget Sci-Fi and horror films like The Being (Jackie Kong, 1983), a role far beneath his talent. His career renaissance got off to a slow start with a recurring role in the NBC sitcom Buffalo Bill (1983), starring Dabney Coleman. On Broadway, he took over the title role in the revival of Dracula and went on the road with the national touring company. He also appeared in Raul Ruiz's Treasure Island (1985), a surrealistic modern-day riff on Robert Louis Stevenson's classic novel.

Finally, Martin Landau's career renaissance began to gather momentum when Francis Ford Coppola cast him in a critical supporting role in his Tucker: The Man and His Dream (1988), for which Landau was nominated for an Academy Award as Best Supporting Actor. He won his second Golden Globe for the role. The next year, he received his second consecutive Best Supporting Actor Oscar nomination for his superb turn as the adulterous husband in Woody Allen's Crimes and Misdemeanors (1989). He followed this up by playing famed Nazi hunter Simon Wiesenthal in the TNT movie Max and Helen (Philip Saville, 1990).

However, the summit of his post-Mission: Impossible career was about to be scaled. He portrayed as the horror actor Béla Lugosi in Tim Burton's biopic Ed Wood (1994) and won glowing reviews. Landau’s Lugosi is a tragicomic creation: his wife has left him, he is addicted to morphine and most of Hollywood thinks he is dead. For his performance, Landau won the Best Supporting Actor Oscar. He finally had been recognized with his profession's ultimate award. His performance, which also won him his third Golden Globe, garnered numerous awards in addition to the Oscar and Golden Globe, including top honors from the New York Film Critics Circle and the National Society of Film Critics.

Landau continued to play a wide variety of roles. In the United Kingdom he appeared opposite Michael Caine in the thriller Shiner (John Irvin, 2000). He turned in a superb performance in a supporting role in The Majestic (Frank Darabont, 2001) opposite Jim Carrey. He received his fourth Emmy nomination in 2004 as Outstanding Guest Actor in a Drama Series for Without a Trace (2002). Excellent was also his part as an Auschwitz survivor in Remember (Atom Egoyan, 2015).

Chris Wiegand in his obituary in The Guardian: "Landau’s own face was instantly recognisable, with its haunted eyes, wide mouth and furrowed brow; even when he broke into a smile, he could seem to be frowning." Martin Landau and Barbara Bain had two daughters, Susan Landau Finch and Juliet Landau.