German actor Otto Gebühr (1877-1954) appeared in 102 films between 1917 and 1962. He is best known for his interpretation of Friedrich II (Frederick the Great), a role he played in 16 films and countless stage performances. He was one the most famous actors of the Weimar period, and thanks to his authoritative roles the Nazis gave him the title 'Actor of the State'. 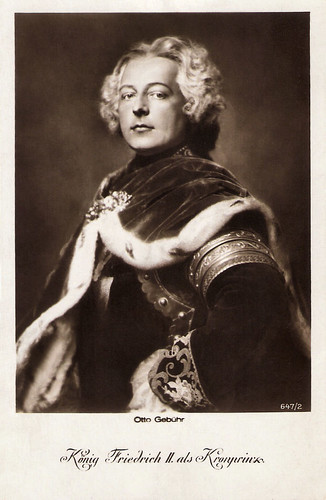 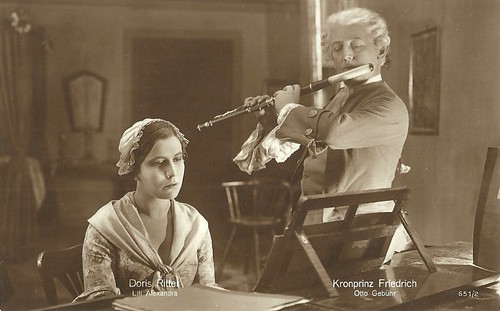 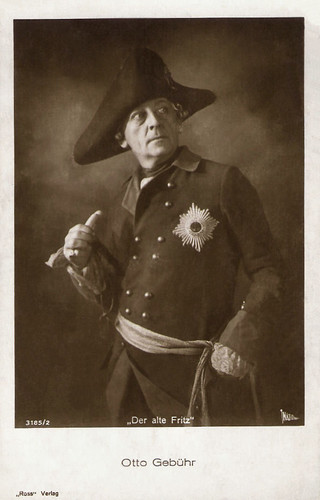 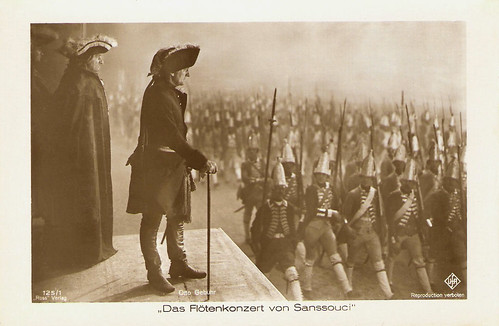 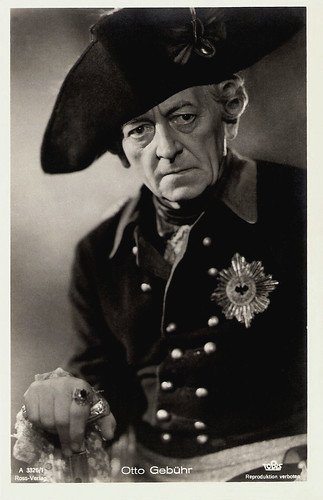 The king of Prussia


Otto Gebühr was born in Kettwig (now Essen), Germany in 1877. He was the son of merchant Otto Gebühr and his wife Fanny Mathilde Moll. He grew up in Hülsenbusch, a part of Gummersbach, and, after his father’s death, in Köln (Cologne).

After attending grammar school he had a trade training at a wool firm. In 1896 he worked as a correspondent in foreign languages for a firm in Berlin, but he also had acting classes. For a while he then worked as a strolling actor till he got a contract at the Stadttheater Görlitz.

From 1898 till 1908 he worked at the Königlichen Hoftheater in Dresden, and till 1914 at the Lessingtheater and the Theater in der Königgrätzer Straße, both in Berlin. During the First World War he was an army volunteer for the field artillery regiment and became a second lieutenant. After this he worked from 1917 till 1919 for famous director Max Reinhardt at the Deutschen Theater in Berlin.

At the same time he began to appear in silent films. His film debut was Der Richter/The Judge (Hans Land, 1917) for the Messter company. Gebühr was a look-a-like of king Friedrich II (1712-1786). Introduced by his colleague Paul Wegener, director Carl Boese cast him as the king of Prussia in the silent film Die Tänzerin Barberina/The Dancer Barbarina (Carl Boese, 1920). The role would become his breakthrough. He would play Friedrich several times, but initially in the very successful, four-part-film-series Fridericus Rex (1920-1923). 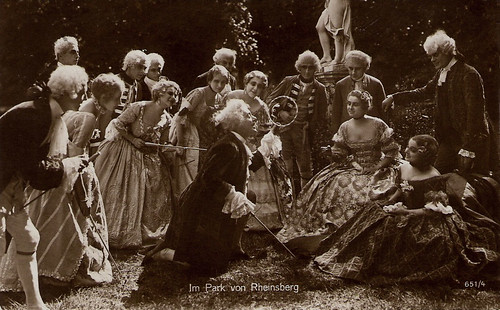 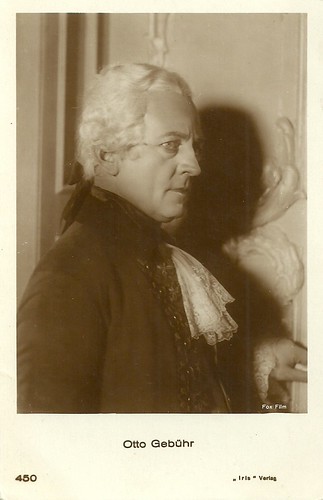 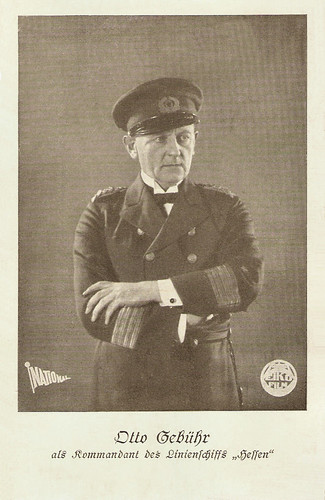 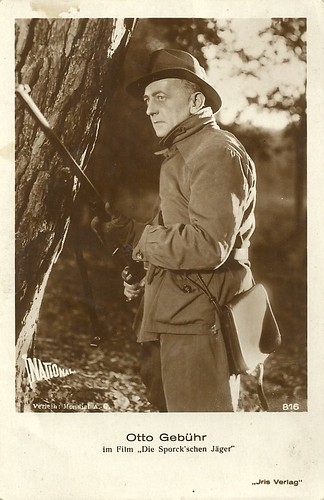 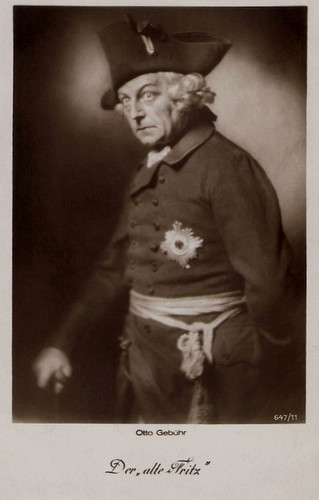 
After the introduction of the sound film, Otto Gebühr again had a huge success as the king of Prussia in Das Flötenkonzert in Sanssouci/The Flute Concert of Sans-Souci (Gustav Ucicky, 1930). He repeated his role in the remake of Die Tänzerin von Sanssouci/Barberina (Friedrich Zelnik, 1932) at the side of Lil Dagover and Hans Stüwe.

Gebühr was the cinematic incarnation of the heroic Prussian, and his type was popular during the Third Reich. Gebühr was a voluntarily pawn in the propaganda machine of the Nazis and appeared in several films, including Fridericus (Johannes Meyer, 1937) with Lil Dagover, as the ‘First National Socialist’, like propaganda minister Joseph Goebbels had called him.

In 1938 he gave Gebühr the title 'Staatsschauspieler' (Actor of the State). He was then one of the four highest paid and most famous actors of Germany - the others were Heinz Rühmann, Hans Albers and Heinrich George.

Some of his roles, like Blücher in Waterloo (Karl Grune, 1928) and the king of Saxony in Bismarck (Wolfgang Liebeneiner, 1940), had the same authoritative features as Friedrich II. He again appeared as Friedrich II in Veit Harlan’s epic Der große König/The Great King (Veit Harlan, 1942). 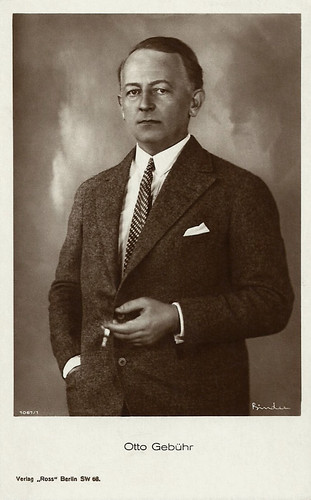 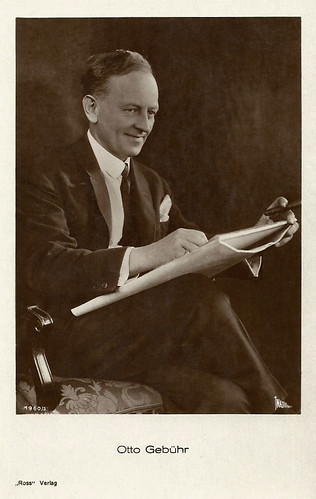 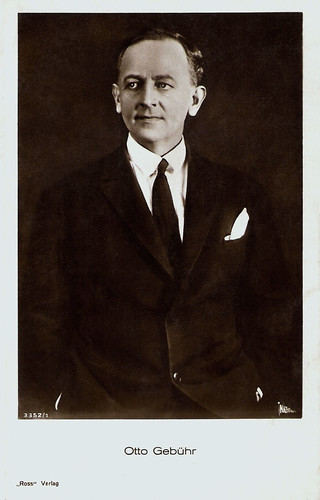 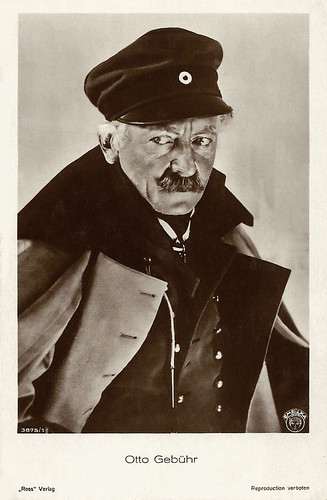 German postcard by Ross Verlag, no. 3875/1, 1928-1929. Photo: Emelka. Publicity still for Waterloo (Karl Grune, 1928), in which Gebühr played General/Fieldmarshall Blücher and Frederick the Great. Here he is dressed as Blücher. 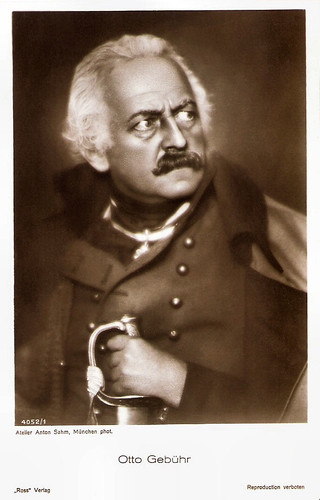 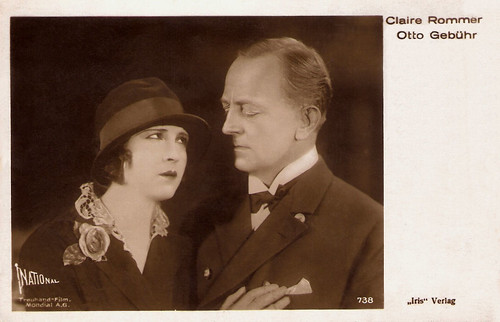 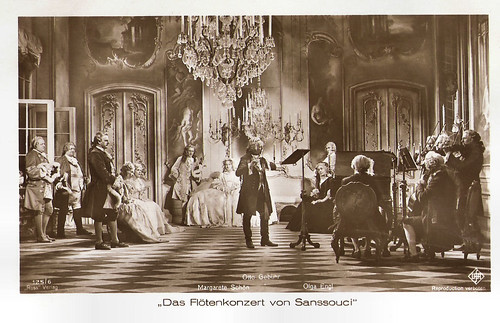 German postcard by Ross Verlag, no. 125/6. Photo: Ufa. Otto Gebühr as Frederick the Great in Das Flötenkonzert von Sanssouci/The Flute Concert of Sans-Souci (Gustav Ucicky, 1930). This picture is a literal citation of the famous painting Flötenkonzert Friedrichs des Großen in Sanssouci (1850-52) by Adolph (von) Menzel, now at the Alte Nationalgalerie in Berlin.


From 1947 on Otto Gebühr was permitted to work again in the theatre. His first post-war film was the drama ...und über uns der Himmel/...and the Sky Above Us (Josef von Báky, 1947) starring Hans Albers.

Again he also appeared under the direction of Veit Harlan in Unsterbliche Geliebte/Immortal Beloved (1951) with Kristina Söderbaum.

Otto Gebühr died of a heart failure in 1954, in Wiesbaden, Germany. He was twice married. In 1910 he had married Cornelia Bertha Julius, with whom he had a daughter, actress Hilde Gebühr. His second wife was actress Doris Krüger, with whom he was married from 1942 till her death in 1950. They had a son, Prof. Dr. Michael Gebühr. 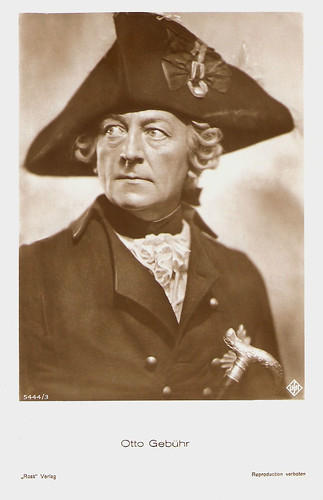 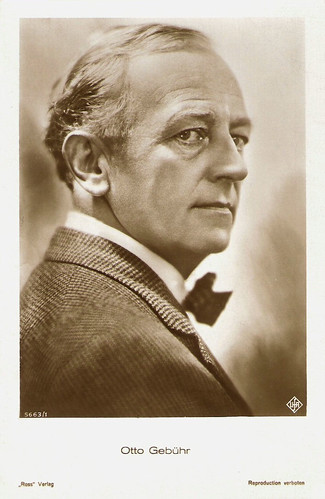 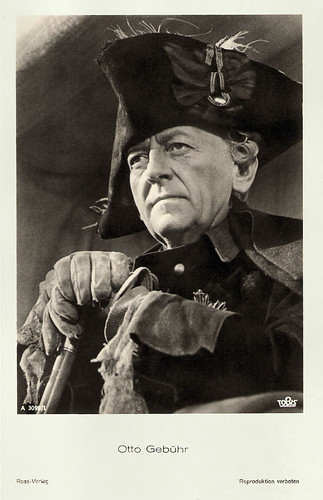 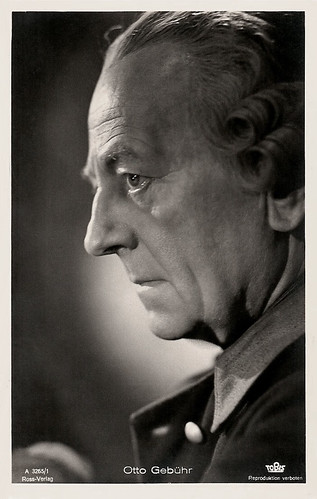 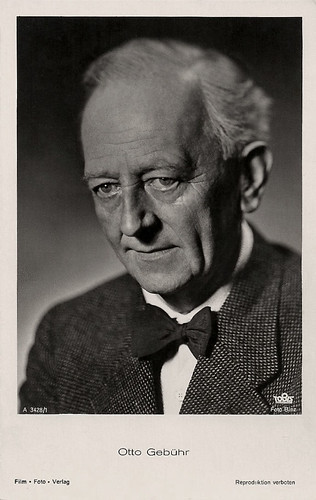 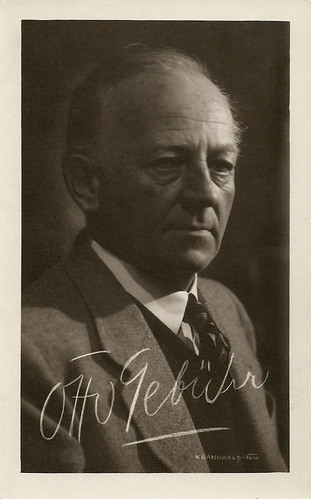 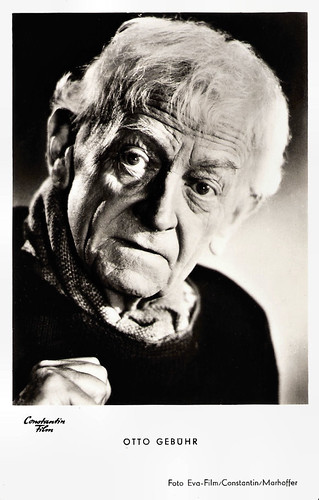