Becoming and dark-haired Claire Bloom (1931) is a British actress whose photogenic, slightly pinched beauty was accented by an effortless elegance and poise. Her part in Charlie Chaplin’s Limelight (1952) catapulted Bloom to stardom. Since then she has been lauded several times for her roles on stage, TV and in the cinema. 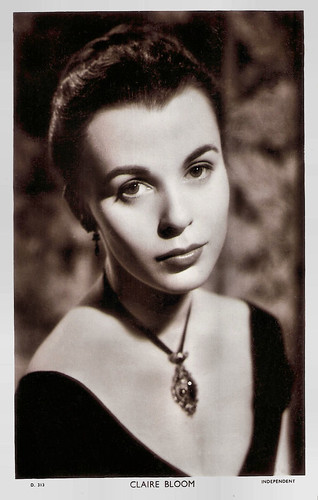 British postcard in the Picturegoer Series, no. D 313. Photo: Independent. 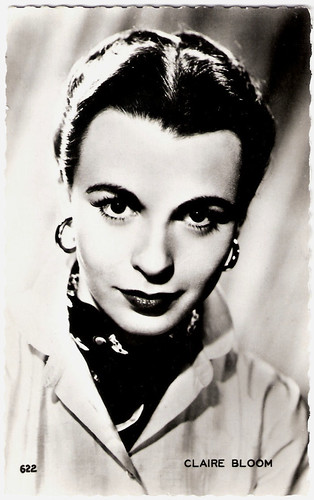 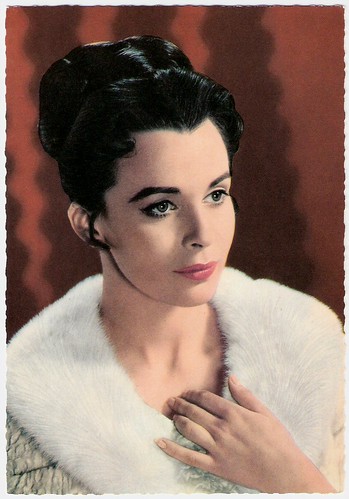 German postcard by ISV, no. B 18. Photo: publicity still for The Brothers Karamazov (Richard Brooks, 1958). 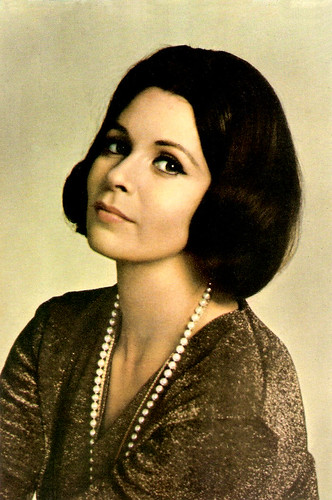 Bloom attended secondary school at the independent Badminton School in Bristol. When she was 15, she made her professional debut on the BBC radio. Subsequently she took her first curtain call with the Oxford Repertory Theatre in 1946 in the production of It Depends What You Mean.

From 1946 till 1948 she trained for the stage with Eileen Thorndike at the Guildhall School of Music and Drama. She also attended the Central School of Speech and Drama in 1947 and 1948.

Her London stage debut was in 1947 in the hit play The Lady's Not For Burning, which also featured the young Richard Burton. The following year, she received great acclaim for her portrayal of Ophelia in a Stratford-upon-Avon production of Hamlet, opposite alternating Paul Scofield and Robert Helpmann. Hamlet was the first of many works by William Shakespeare in which Bloom would appear.

Her first film role was a lead in the British courtroom film drama The Blind Goddess (Harold French, 1948) with Eric Portman and Anne Crawford.

In 1952 she was chosen by Charlie Chaplin to appear in his film Limelight (Charles Chaplin, 1952). Her bravura turn as the young suicidal ballerina Terry saved from despair by an ageing music hall clown (Chaplin) was exquisitely touching. Limelight catapulted Bloom to stardom, and remains one of her most memorable roles.

She was subsequently featured in a number of costume roles in films such as Laurence Olivier's film version of Richard III (Laurence Olivier, 1955), Alexander the Great (Robert Rossen, 1956) with Richard Burton, The Brothers Karamazov (Richard Brooks, 1958), The Buccaneer (Anthony Quinn, 1958) with Yul Brynner, and The Wonderful World of the Brothers Grimm (Henry Levin, George Pal, 1962) starring Laurence Harvey. 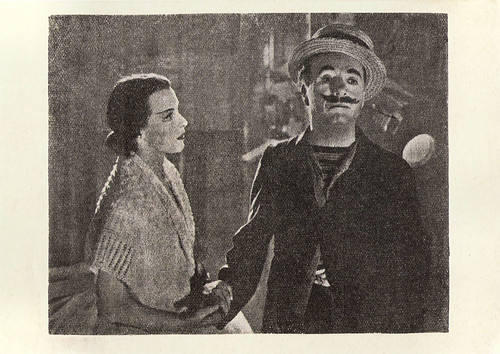 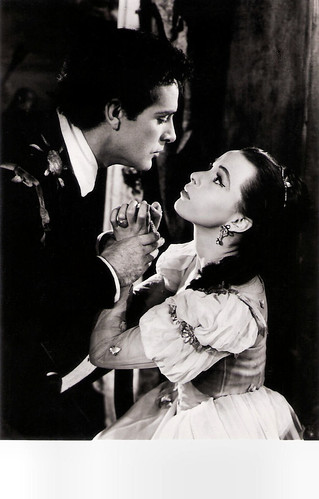 Danish postcard by Kaj Brammers Boghandel, Helsingor, no. 748. Photo: publicity still for the stage production of Hamlet at the Hamletspillene in Kronborg, 1954. Richard Burton as Hamlet and Claire Bloom as Ophelia. 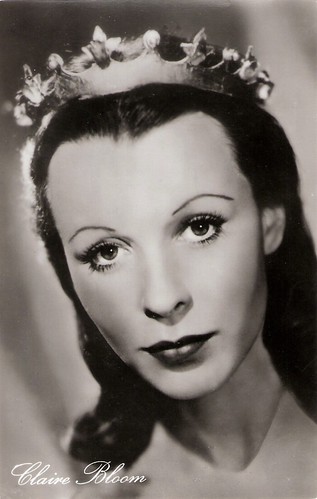 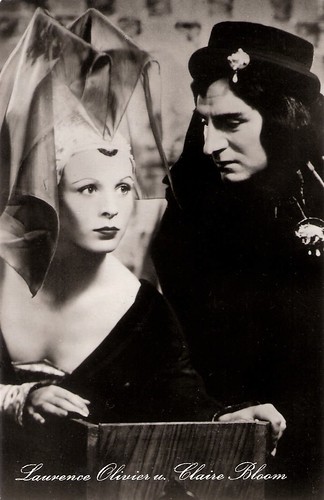 
Despite her new film career, Claire Bloom continued to appear on the Shakespearean stage. "Joining the Old Vic Company for the 1952-1953 and 1953-1954 seasons, she played Helena, Viola, Juliet, Jessica, Miranda, Virgilia (in Coriolanus), Cordelia (in King Lear) and (again) Ophelia in a highly successful tenure", notes Gary Brumburgh at IMDb. "Touring Canada and the United States as Juliet, she made her Broadway bow in the star-crossed lover role in 1956, also playing the Queen in Richard II."

Over the years, she was a strong presence on both the West End and Broadway. Her other memorable stage roles included parts in The Trojan Women, Vivat! Vivat! Regina!, Hedda Gabler, A Doll's House and A Streetcar Named Desire.

In the cinema Bloom began to play contemporary film roles, including Look Back in Anger (Tony Richardson, 1959) and The Spy Who Came in from the Cold (Martin Ritt, 1965), both with Richard Burton. She also played a sexually unstable housewife in The Chapman Report (George Cukor, 1962), the lesbian psychic Theodora in The Haunting (Robert Wise, 1963), and a compassionate psychologist in the Oscar winning film Charly (Ralph Nelson, 1968).

Whenever her schedule allowed it, Bloom returned to the theatre. According to Gary Brumburgh, her favourite stage role is Blanche DuBois in A Streetcar Named Desire. Bloom also kept appearing on TV, memorably as Lady Marchmain in Brideshead Revisited (Charles Sturridge, Michael Lindsay-Hogg, 1981), for which she was nominated for an Emmy.

She also appeared in a remake of Terence Rattigan's Separate Tables (John Schlesinger, 1983) starring Julie Christie, in the epic miniseries Ellis Island (Jerry London, 1984), and in Philip Roth's acclaimed adaptations of The Ghost Writer (Tristram Powell, 1984) and Shadowlands (Norman Stone, 1985), in which she played Joy Gresham, the wife of C.S. Lewis. For this performance she received the BAFTA Award as Best Actress. 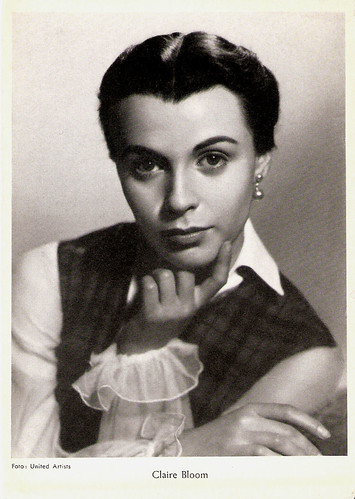 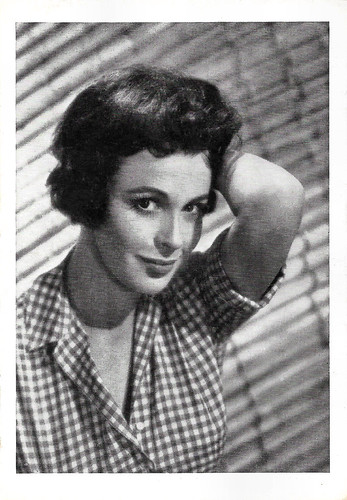 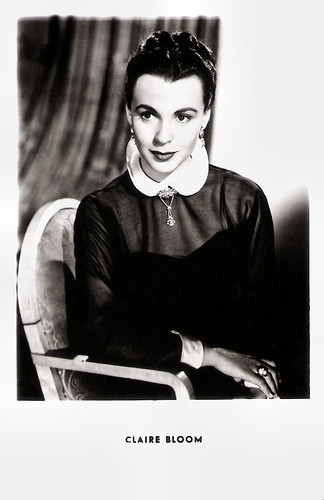 German postcard by Netter's Star Verlag, Berlin, no. A 842. 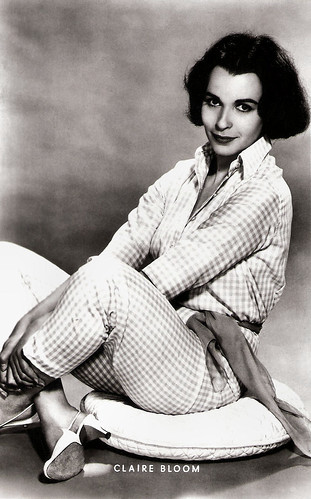 German postcard by Netter's Star Verlag, Berlin, no. A 1593.


In the 21st Century, Claire Bloom kept enjoying a full and productive career. She appeared in the TV mini-series The Ten Commandments (Robert Dornhelm, 2006). Later she played in the British series Doctor Who (2009) about the adventures of the time travelling alien adventurer and his companions, and The Bill (2010) about the work of uniformed officers and detectives from a London police station.

Bloom has married three times. Her first marriage, in 1959, was to actor Rod Steiger, whom she had met when they both performed in the play Rashomon. Their daughter is opera singer Anna Steiger, Bloom's only child. Steiger and Bloom divorced in 1969.

In that same year, Bloom married producer Hillard Elkins. The marriage lasted three years and the couple divorced in 1972.

Bloom's third marriage in 1990 was to writer Philip Roth, her longtime companion. The couple divorced in 1995. Bloom has written two memoirs about her life and career. The first, Limelight and After: The Education of an Actress, was released in 1982 and was an in-depth look at her career and the film and stage roles she had portrayed.

Her second book, Leaving a Doll's House: A Memoir, was published in 1996, and went into greater details about her personal life; she discussed not only her marriages but her romantic relationships with Richard Burton and Laurence Olivier. Bloom also detailed the highly complicated relationship between her and Philip Roth during their marriage. The details Bloom shared were unflattering to Roth, and created a controversy regarding the true nature of their relationship. The character of Eve Frame in Roth's 1998 novel I Married a Communist is considered by some to be his veiled rebuttal to some of the accusations made against him in her memoir.

In 2013, Claire Bloom was appointed Commander of the Order of the British Empire (CBE) in the Birthday Honours for services to drama.