Sir Elton Hercules John CBE (1947) is an English singer-songwriter, composer, pianist, record producer, and occasional actor (Tommy!). He has worked with lyricist Bernie Taupin as his songwriter partner since 1967; they have collaborated on more than 30 albums. In his five-decade career Elton John had more than fifty Top 40 hits and has sold more than 250 million albums, making him one of the best-selling music artists in the world. 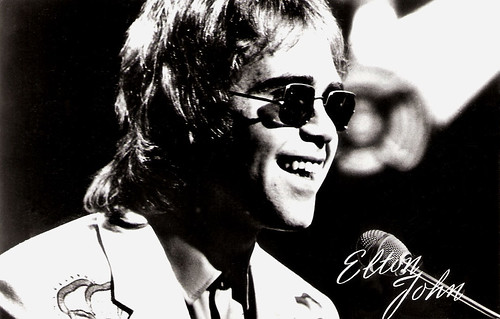 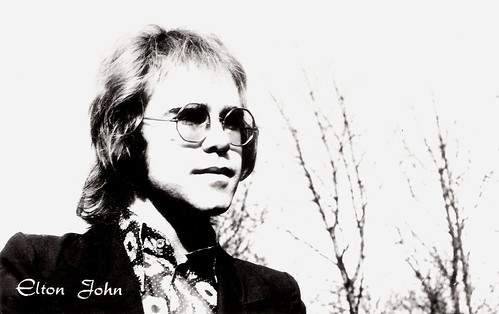 
Elton John was born Reginald Kenneth Dwight in the Pinner area of London, in 1947. He was the eldest child of Stanley Dwight, a flight lieutenant in the Royal Air Force, and the only child of Sheila Eileen (née Harris). He was raised in a council house by his maternal grandparents, in Pinner. His parents did not marry until he was 6 years old, when the family moved to a nearby semi-detached house.

Both of Dwight's parents were musically inclined, his father having been a trumpet player with the Bob Millar Band, a semi-professional big band that played at military dances. Elton learned to play piano at the age of 4. Only 11, he won a junior scholarship to the Royal Academy of Music and for the next five years, he attended Saturday classes at the Academy in central London.

By 1962 he and his friends formed a band called Bluesology. By day, the 15 years-old ran errands for a music publishing company. His nights, he divided between solo gigs at a London hotel bar and working with Bluesology.

His father tried to steer him toward a more conventional career, such as banking. At age 17, he left Pinner County Grammar School just prior to his A Level examinations to pursue a career in the music industry. His parents divorced and his mother married Fred Farebrother, whom Elton affectionately dubbed "Derf".

In 1966, the band became musician Long John Baldry's supporting band, and played 16 times at the legendary Marquee Club. Dwight met his songwriting partner, Bernie Taupin, in 1967, after they had both answered an advert by the A&R manager for Liberty Records for songwriters. Six months later Dwight was going by the name Elton John (merging the names of two members of Bluesology: saxophonist Elton Dean and Long John Baldry). For two years they wrote songs for other artists, including Lulu, and John also worked as a session musician for artists such as the Hollies and the Scaffold.

In 1969 his debut album, Empty Sky, was released. The formula for this and subsequent albums was gospel-chorded rockers and poignant ballads. In 1970 the single Your Song from his second album Elton John reached the top ten in the UK and the US. It was his first hit single. The album soon became his first hit album, reaching number four on the US Billboard 200 and number five on the UK Albums Chart. John and Taupin then wrote the soundtrack to the film Friends and then the album Madman Across the Water. 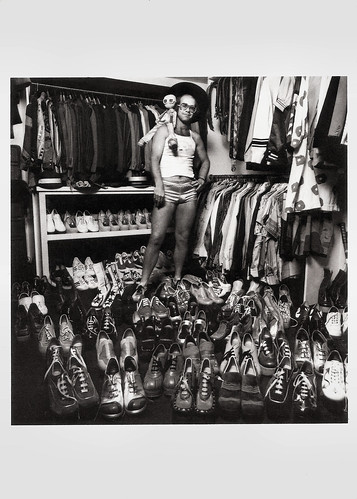 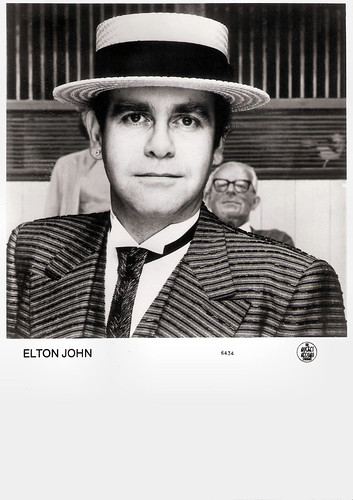 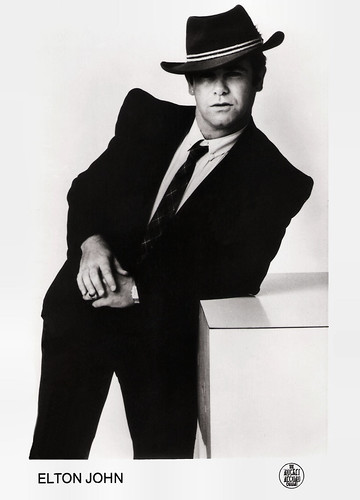 
1970–1976 is Elton John's most commercially successful period, but is also held in the most regard critically. In 1972, he released Honky Château with the hit singles Rocket Man and Honky Cat. It became John's first US number one album, spending five weeks at the top of the Billboard 200.

It began a streak of seven consecutive US number one albums. The pop album Don't Shoot Me I'm Only the Piano Player came out at the start of 1973 and reached number one in the UK, the US, Australia among others. The album produced the hits Crocodile Rock, his first US Billboard Hot 100 number one, and Daniel.

In 1974, a collaboration with John Lennon took place, resulting in Lennon's appearance on Elton John's single cover of the Beatles' Lucy in the Sky with Diamonds. Lennon is credited as Dr. Winston O'Boogie. The song was used for the film All This and World War II (Susan Winslow, 1976). John also released the album Caribou (1974), which featured The Bitch Is Back and the orchestrated Don't Let the Sun Go Down on Me.

Pete Townshend of the Who asked John to play a character called the 'Local Lad' in the film of the rock opera Tommy (Ken Russell, 1975). In the film, he is shown performing the song Pinball Wizard while playing a pinball machine integrated with a miniature piano keyboard.

The 1975 autobiographical album Captain Fantastic and the Brown Dirt Cowboy debuted at number one in the US, the first album ever to do so, and stayed at the top for seven weeks. John revealed his previously ambiguous personality on the album, with Bernie Taupin's lyrics describing their early days as struggling songwriters and musicians in London. Someone Saved My Life Tonight was the hit single from this album. His next album, the rock-oriented Rock of the Westies, again entered the US albums chart at number 1.

In 1976, the live album Here and There was released. A few months later it was followed by the Blue Moves album, which contained the single Sorry Seems to Be the Hardest Word. His biggest success that year was Don't Go Breaking My Heart, a duet with Kiki Dee that topped both the UK and US charts. In November 1977, Elton John announced he was retiring from performing. 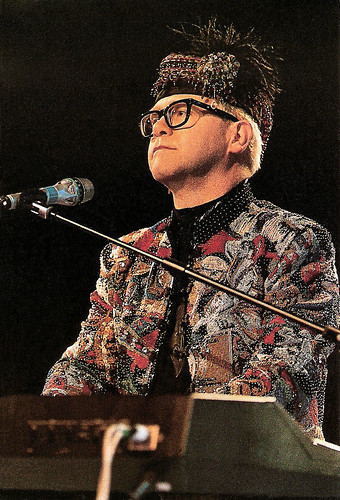 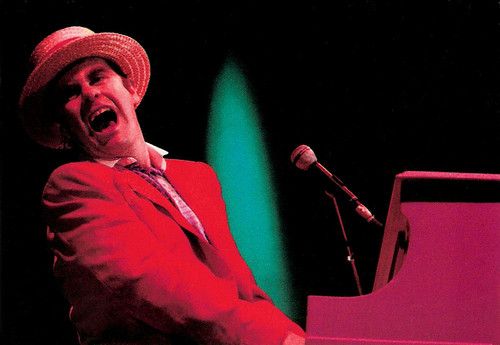 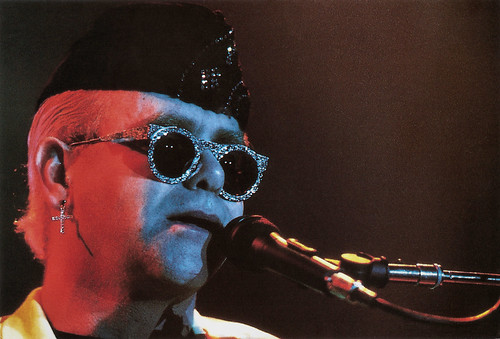 
Elton John kept recording and had several other hits throughout the 1980s, including Nikita which featured in a music video directed by Ken Russell. Along with Tim Rice, Elton John wrote the songs for Disney's animated film The Lion King (Roger Allers, Rob Minkoff, 1994). Both John's songs Can You Feel the Love Tonight and Circle of Life became hits.

John also achieved success in musical theatre, both in the West End and on Broadway, composing the music for the stage version of The Lion King (1997), Aida (1999) and Billy Elliot the Musical (2005). In 2000, he and Tim Rice teamed again to create songs for the animated film The Road to El Dorado (Bibo Bergeron, Don Paul, 2000).

On 6 September 1997, he performed a new version of Candle in the Wind, in tribute to Princess Diana at her funeral, with new lyrics specially written by Bernie Taupin. The song became the fastest and biggest-selling single of all time, eventually selling over 33 million copies worldwide.

Elton John was inducted into the Rock and Roll Hall of Fame in 1994, is an inductee into the Songwriters Hall of Fame, and is a fellow of the British Academy of Songwriters, Composers and Authors. Having been named a Order of the British Empire in 1996, John was made a Knight Bachelor by Elizabeth II for "services to music and charitable services" in 1998. John received five Grammy Awards, five Brit Awards – winning two awards for Outstanding Contribution to Music and the first Brits Icon in 2013 for his "lasting impact on British culture", an Academy Award, a Golden Globe Award, a Tony Award, a Disney Legends award, and the Kennedy Center Honors in 2004.

Elton John announced he was bisexual in 1976 and he has been openly gay since 1988. In 2005 he entered into a civil partnership with filmmaker David Furnish, the first day that civil unions between homosexuals were legal in England and Wales. After same-sex marriage became legal in England and Wales in 2014, he wed Furnish on 21 December 2014. His husband made the documentary Elton John: Tantrums & Tiaras (1997). Elton John and David Furnish have two sons, both born via surrogate: Zachary Jackson Levon Furnish-John (2010) and Elijah Joseph Daniel John (2013). The godmother of his sons is Lady Gaga.

Elton John is a champion for LGBT social movements worldwide. He has been heavily involved in the fight against AIDS since the late 1980s. In 1992, he decided that all profits from his singles would be donated to AIDS charities and formed the Elton John AIDS Foundation. The foundation has become one of the world's largest nonprofit AIDS organisations. In 1993 it began hosting the annual Academy Award Party, which has since become one of the highest-profile Oscar parties in the Hollywood film industry. Since its inception, the foundation has raised over US $200 million.

In 2006, Elton John was estimated to have sold 250 million albums during his career. From 1970 till 2009, he has had at least one charted Billboard hit every year.