Italian actor Franco Andrei (1925) played the hunky Latin lover in German and Italian comedies of the 1950s. In the 1960s, he appeared as a secret agent in several Eurospy-films and in the TV series Mission: Impossible. 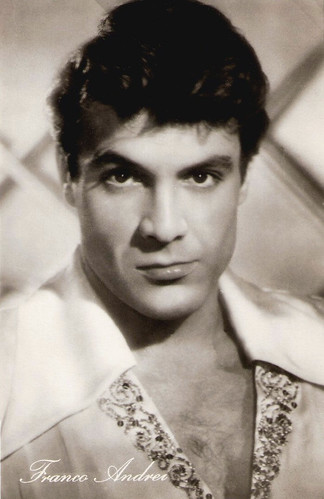 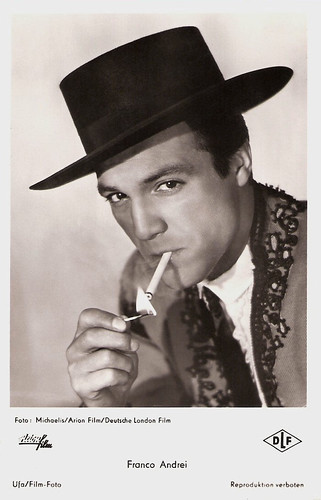 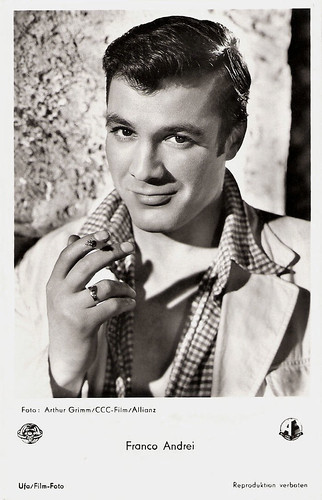 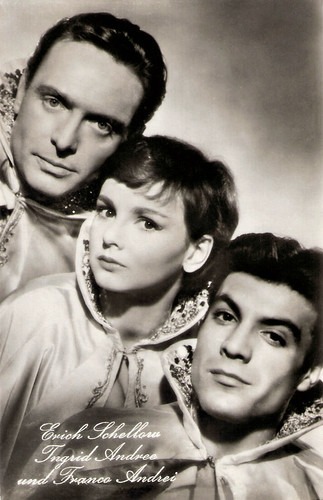 He made his film debut in the early 1950s. In 1953, he appeared as the Italian lover of Maria Schell in the German comedy Tagebuch einer Verliebten/The Diary of a Married Woman (Josef von Báky, 1053) with O.W. Fischer as her husband. The film was based on one of the popular novels by Johannes Mario Simmel.

Andrei played another Latin lover – this time a Spanish one - in the musical Tanz in der Sonne/Dance in the Sun (Géza von Cziffra, 1954) with French actress Cécile Aubry. He also appeared in the German crime drama Drei vom Varieté/Three from Variety (Kurt Neumann, 1954) with Ingrid Andree, and the German-Italian adventure film Stern von Rio/Star from Rio (Kurt Neumann, 1955) with Johannes Heesters.

He also played a supporting part in the French film Sait-on jamais.../No Sun in Venice (Roger Vadim, 1957) about a cute and amoral (and Vadim’s favourite type of) French girl (Francoise Arnoul) living in a sumptuous Venetian palazzo. Andrei was one of the handsome guys swarming around her.

At IMDb, Hal Erickson writes: “Vadim’s second directorial project was Sait-On Jamais, which was released in English-speaking countries as Does One Ever Know and No Sun in Venice. Set in Italy, this romantic suspenser is inventively paced to the musical improvisations of the Modern Jazz Quartet.” 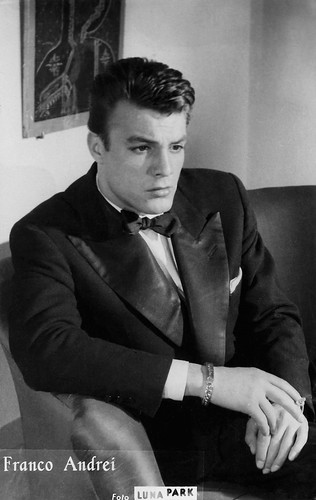 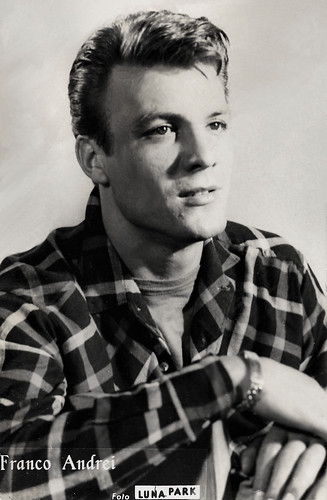 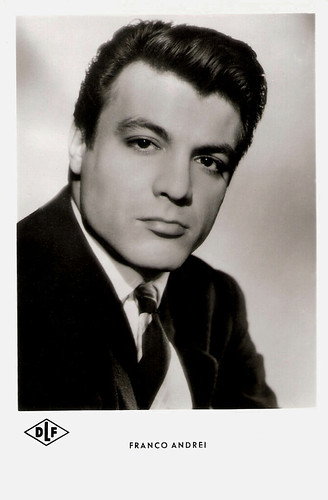 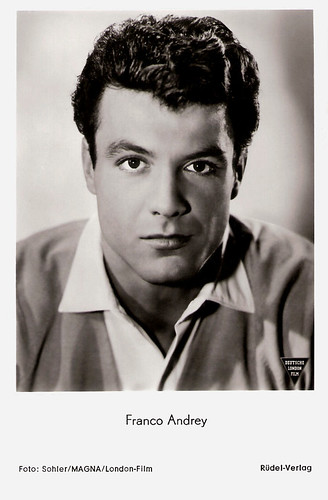 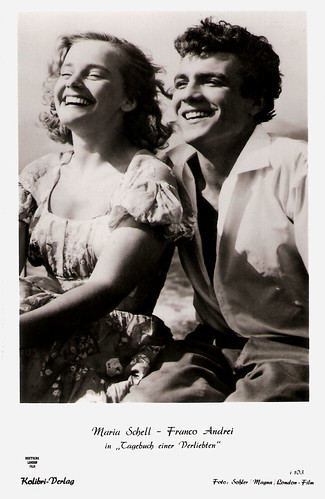 
Franco Andrei continued his international film career in the 1960s, although his appearances became rarer.

He had a supporting part in the American production The Big Show (James B. Clark, 1961), which was filmed on location in Munich, Germany. The film’s main claim to fame was that it was the last major production starring aqua diva Esther Williams.

As Frank Andrews, Andrei played a secondary character in the Eurospy film Agente 3S3: Passaporto per l'inferno/Agent 3S3: Passport to Hell (Sergio Sollima, 1965). (The meaning of the codename Agent 3S3 is Secret Agent No. 3 of the 3rd Special Division). He returned in another Eurospy thriller by director Sollima, Requiem per un agente segreto/Requiem for a Secret Agent (Sergio Sollima, 1966) starring Stewart Granger.

His best known film is probably the Sci-Fi horror film Terrore nello spazio/Planet of the Vampires (1965) by cult director Mario Bava. At IMDb, reviewer In-the-fade writes: “Mario Bava does it again. The crystal colours, eerie atmosphere and evocative visuals are downright dazzling and haunting in this low-budget Italian Sci-fi outing. Never have I been disappointed in these technical aspects while experiencing the master at work. Many have mentioned it and the influences / similarities to Ridley Scott's 'Alien (1979)' ultimately sticks out.”

Robert Firsching at AllMovie adds: “This classic blend of science-fiction and horror belies its extremely low budget with buckets of atmosphere and some genuinely creepy setpieces. The story concerns the crews of two spaceships, who land on a foggy, seemingly deserted planet. What they don't know is that the planet was home to a race of vampiric aliens, who possess their minds, eventually rising from their strange, misty graves to seek human blood. Legendary director Mario Bava once again proves himself a master at atmospheric composition, using color, sound, and minimalistic sets in original and unnerving ways. Barry Sullivan stars”. 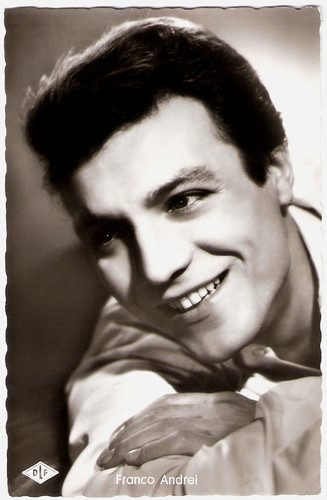 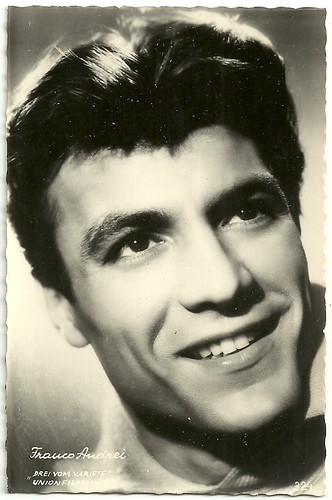 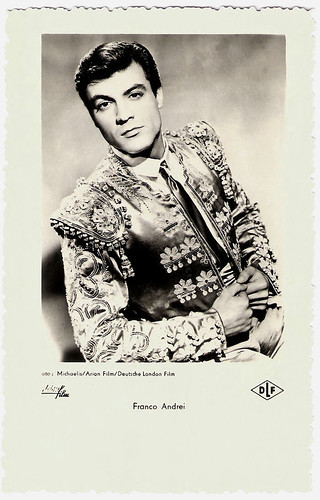 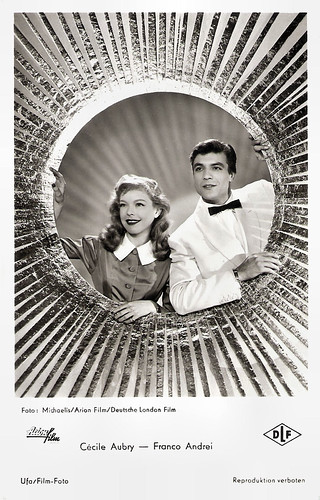 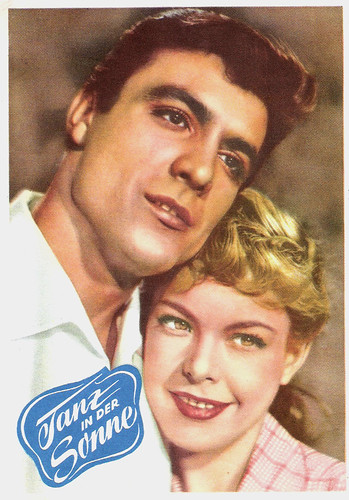