Christiane Hörbiger (1938) is an Austrian television and film actress, born into a well-known actors family. Since 1955, she made a name for herself on stage and television and in several films. 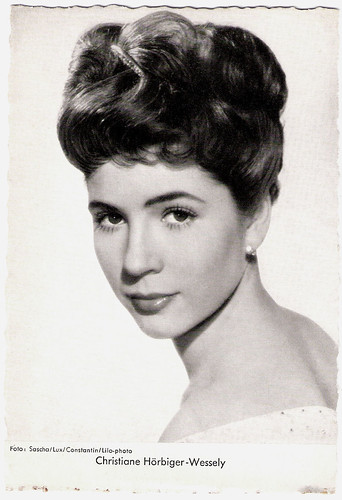 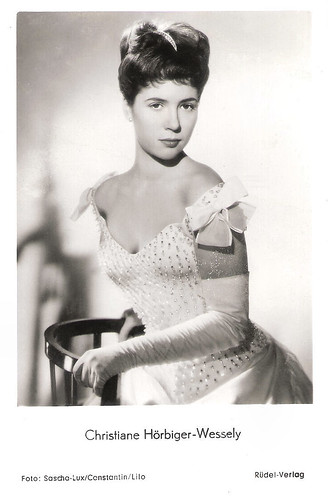 No doubt whose offspring she was


Christiane Hörbiger was born in 1938 in Vienna, Austria. She is one of the three actress daughters of the famous Austrian actors Attila Hörbiger and Paula Wessely. Her uncle is the equally known Paul Hörbiger. Her sisters are Elisabeth Orth and Maresa Hörbiger, and she is also the aunt of German-Austrian actor Christian Tramitz.

Christiane made her film debut in the female lead of Der Major und die Stiere/The Major and the Steers (Eduard von Borsody, 1955) with Fritz Tillmann and her father Attila Hörbiger.

She started to study acting at the Max-Reinhardt-Seminar, but broke off her studies when she received another offer for a film role. She played with her mother Paula Wessely in Die Wirtin zur Goldenen Krone/The landlady of the Golden Crown (Theo Lingen, 1955).

In the historical drama Kronprinz Rudolfs letzte Liebe/Mayerling (Rudolf Jugert, 1956), she then played Baroness Marie Vetsera opposite Rudolf Prack as Crown Prince Rudolf. She was credited as Christiane Hörbiger-Wessely. The director insisted that Christiane Hörbiger used both her parents' names (Wessely and Hörbiger) to leave the audience no doubt whose offspring she was.

For Jugert, she also appeared in the Heimat drama Der Meineidbauer/The Perjurer (Rudolf Jugert, 1956) with Carl Wery and Heidemarie Hatheyer. Another Heimat drama was Der Edelweißkönig (Gustav Ucicky, 1957) with Rudolf Lenz. She played a supporting part in the comedy Immer die Radfahrer/Always the cyclists (Hans Deppe, 1958) with Heinz Erhardt.

Her stage debut in 1959 as Recha in Lessings Nathan der Weise at the Burgtheater, was not a success. From 1960 till 1961, she played at the Städtischen Bühnen Heidelberg, and from 1961 till 1966 she was back in Vienna at the Burgtheater. Later she played several important stage roles at the Schauspielhaus Zürich. 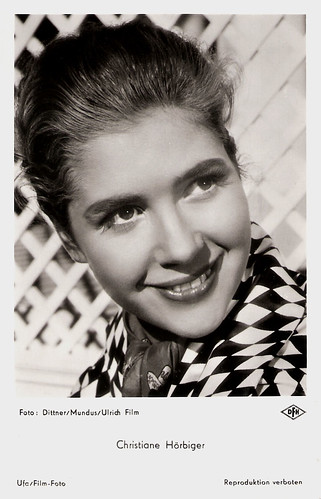 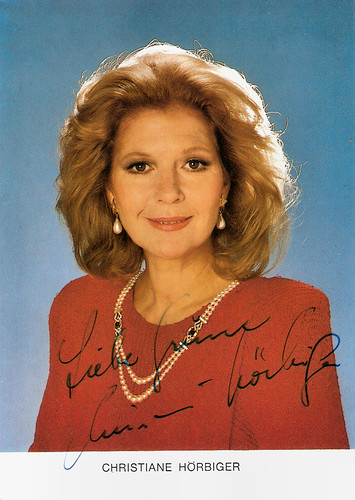 I am the White Clown


From 1960 on, Christiane Hörbiger played in various German and Austrian TV films and series. Incidentally, she appeared in such feature films as the fantasy Der Bauer als Millionär/The Farmer as Millionaire (Alfred Stöger, Rudolf Steinboeck, 1961) with Käthe Gold, the fairy-tale Der Verschwender/The Wasteful (Kurt Meisel, 1964) with Walther Reyer, and Versuchung im Sommerwind/Temptation in the Summer Wind (Rolf Thiele, 1972) as the assistant of Helmut Käutner.

She played the lead in the popular TV series Das Erbe der Guldenburgs/The Legacy of the Guldenburgs (Jürgen Goslar, Gero Erhardt, 1987-1990) about an aristocratic German family (The Guldenburgs) and the various relationships and problems the family goes through. The success of the series caused a second start of her career.

In the 1990s, she returned to the cinema in films such as the comedy Schtonk (Helmut Dietl, 1992), the slightly fictionalised story of an art forger (Uwe Ochsenknecht), a journalist desperate for a big story (Götz George), and the biggest press scandal in German history: the Hitler Diaries.

From 1998 until 2002, she played the eponymous role in the Austrian TV series Julia - eine ungewöhnliche Frau/Julia - An Extraordinary Woman. In 1995, she was a member of the jury at the 45th Berlin International Film Festival.

Hörbiger keeps working for television. Her most recent feature film is the crime comedy Mean Parents Suck (William Shepherd, 2010) in which she played a Kindergarten teacher who kills mean parents. Her only foray so far into voice acting has been the role of Mrs. Caloway (the dairy cow) in the German-language version of Disney's Home on the Range (Will Finn, John Sanford, 2004).

Christiane Hörbiger was married twice: from 1962 till 1967 to director Wolfgang Glück and later to Swiss journalist Rolf R. Bigler. From this marriage comes the son Sascha Bigler (1968), who she raised alone after the death of her husband. Sascha Bigler lives in Los Angeles today and works as a director. Her later partner was Gerhard Tötschinger. From 1984 until his death in 2016, the couple lived alternately in Vienna, Baden near Vienna and Zurich.

In 2008 Christiane Hörbiger published her autobiography Ich bin der Weiße Clown (I am the White Clown). She won many awards. In 2001, she received Germany's most important medal, the Bundesverdienstkreuz. In 2004, she was awarded as Kammerschauspielerin in Austria. 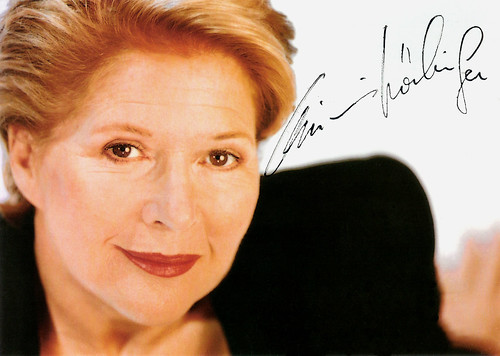