Among Pathé Frères's filmmakers, Albert Capellani was one of the main pioneers, who developed and systematised several techniques of representation which set the standard in the narrative cinema. One of his first films was Le chemineau/The Tramp (Albert Capellani, 1905), based on the first part of Victor Hugo's novel Les Misérables. In the short silent film Jean Valjean, who was granted lodging by the parish priest of a village, steals several silver candlesticks and escapes the arrest thanks to the false testimony of the priest. Unclear is who the actors are, but sets were made by Hugues Laurent. The beautiful series of hand-coloured postcards was published by Croissant in Paris. 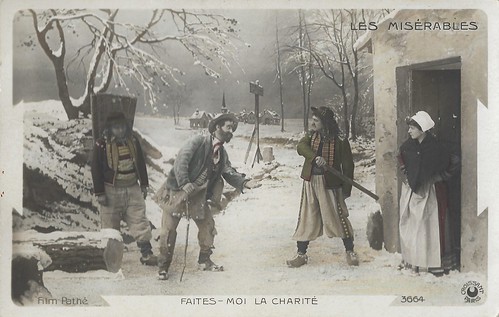 French postcard by Croissant, Paris, no. 3664. Photo: Film Pathé. Still for Le chemineau/The Tramp (Albert Capellani, 1905). It's winter, snow falls on the desolate countryside. An exhausted tramp asks in vain for an alimony from passers-by. 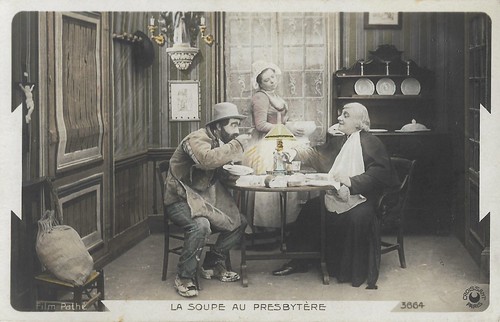 French postcard by Croissant, Paris, no. 3664. Photo: Film Pathé. Still for Le chemineau/The Tramp (Albert Capellani, 1905). The tramp presents himself at the presbyterium and is hosted by the pastor, who lets him dine at his table and sleep in his bed, while he himself sleeps in his chair.

Director Albert Capellani was a neglected but important film pioneer. Recent retrospectives of his restored films, e.g. at Cinema Ritrovato in Bologna in 2012, and special DVD editions attest to Capellani's contribution in the use of deep staging shots, various changes in framing and even rudimentary editing techniques.

Capellani, born in 1874 in Paris, directed films between 1905 and 1922. One of his brothers was the actor-sculptor Paul Capellani. Albert studied acting under Charles le Bargy at the Conservatoire de Paris. Starting his career as an actor, he worked with the director André Antoine at the Théâtre Libre and the Odéon. He then began directing plays for the Odéon, working alongside renowned actor and director Firmin Gémier. In 1903, he became the head of the Alhambra music hall in Paris. He continued to work as an actor and director until he received a job offer from the Pathé Frères studio in 1905.

For Pathé Frères, Albert Capellani tended to specialise in several genres: costume dramas with historical and biblical themes, fables, fantastic adventures and melodramas often based on famous novels. Le Chemineau/The Tramp (1905), one of his first films, was such a melodrama. In 5 minutes, it stages an episode from Les Misérables by Victor Hugo in which Jean Valjean, who is granted lodging by mgr. Myriel, the parish priest of a village, steals several silver candlesticks and escapes the arrest thanks to the false testimony of the priest. In the US Le Chemineau premiered in 1906 and was inappropriately titled The Strong Arm of the Law.

Richard Abel in his article Capellani avant Griffith, 1906-1908 in The Ciné Goes to Town : French Cinema, 1896-1914: "The film mainly uses the usual representation system of the beginnings of the cinema: its six exhibition boards, the majority of which consist of long shots, were filmed in studio with decorations painted on panels for indoor and outdoor scenes. The first two paintings, for example, depict a winter landscape with a small village (church included) visible in the distance, in the background, while in the foreground, the tired silhouette of Jean Valjean staggers in the falling snow."

However, Abel sees at least three occurrences of unusual framing or editing choices: "What is particularly surprising, in the very first painting, is to see Valjean arrive thanks to an unexpected big plan that not only serves to catch the spectator but also to describe briefly the character, emphasizing his disillusioned gaze, his sad mouth and ragged appearance. After being rejected by a series of peasants on his way and facing a woman opening the door where he just knocked, Valjean appears in front of the presbytery door and is invited by a maid to enter a small room where the priest is seated at the table. This scene follows its movement through a sequence of exterior and interior shots, from one side of the door (on the right of the screen) to the other (on the left of the screen)."

"When the servant surprises him with a plate of food in her hand, a horizontal panning to the right reveals an adjoining room where the priest and the maid lead him to spend the night. This sequence continues, while he discovers, in the background, a cupboard filled with silverware, stuffs the candlesticks in a bag and, in a reverse plane of horizontal panning to the left, goes on tiptoe in front of the priest asleep in the first room and go out the door. Only one of the two final plans has been preserved: the picture of the interior of a shop where Valjean pledges candlesticks, the maid, unsure of nothing, enters and is shocked to see them; the gendarmes stop him. The final painting apparently brings the viewer back into the priest's room, but probably without the need for a similar panoramic view, when the latter declares to the gendarmes, against all odds, in a recreated intertitle: 'Let this man go, I gave him the candlesticks'."

Richard Abel concludes: "During this period of transformation (c. 1906-1908), Capellani and his fellow directors at Pathé Frères, but also Alice Guy and especially Louis Feuillade at Gaumont, successfully tested many narrative and representative strategies that would characterize the narrative discourse of French cinema during the most of the 1910s. The American filmmakers, first at Vitagraph, then at Biograph, where D.W. Griffith began shooting films in the summer of 1908, would develop them even more and lay the groundwork for what would be called later 'Hollywood classic cinema'. Although there is little direct evidence, French films, particularly those of Capellani, most likely have had a strong impact on American cinema as they were widely distributed and screened in the United States. Pathé films not only served to close the variety shows in hundreds of theaters, they also formed the main entertainment of the Nickelodeon, a new kind of theaters, which quickly counted by the thousands from early 1907 onwards."

Albert Capellani made a feature-length version of Les Misérables in 1912. He worked in the US from 1914 to 1922, under contract to Metro, where he frequently directed Alla Nazimova and Clara Kimball Young. Then he stopped with film making and returned to Paris. There he died in 1931, neglected and only 57 years old. The film director Roger Capellani was his son. 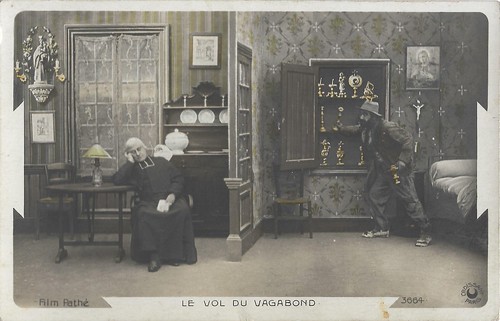 French postcard by Croissant, Paris, no. 3664. Photo: Film Pathé. Still for Le chemineau/The Tramp (Albert Capellani, 1905). At night, the tramp sees golden objects that serve for mass in a cupboard in the bedroom. He sticks them in his bag and secretly sneaks away, trying not to awake the pastor. 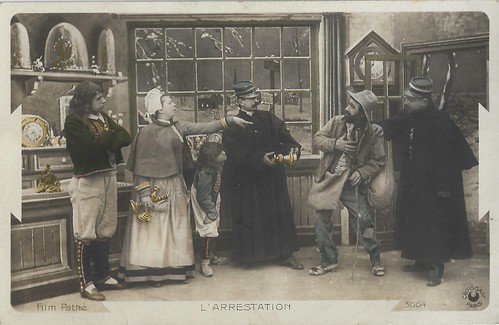 French postcard by Croissant, Paris, no. 3664. Photo: Film Pathé. Still for Le chemineau/The Tramp (Albert Capellani, 1905). Arrested at a jeweller, to whom he tries to sell his loot, the gendarmes bring him back to the pastor. 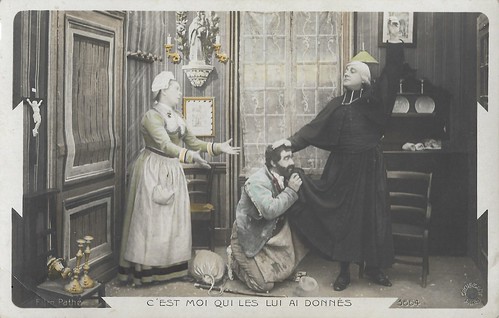 French postcard by Croissant, Paris, no. 3664. Photo: Film Pathé. Still for Le chemineau/The Tramp (Albert Capellani, 1905). Despite all, the pastor wants to exonerate the miserable man's soul and tells a lie to the gendarmes: I gave the objects myself to him. The thief repents.