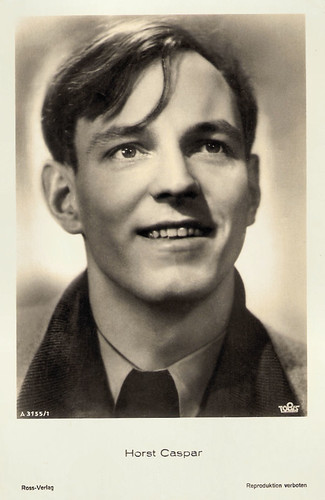 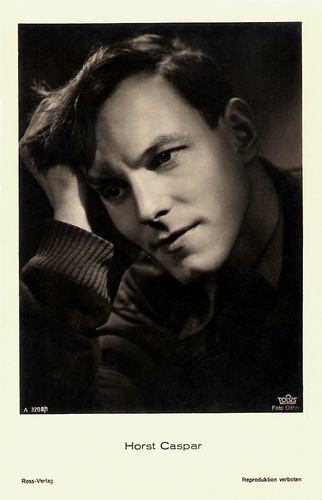 Mischling of the second degree


Horst Joachim Arthur Caspar was born in 1913 in Radegast, Germany. He was the son of Max Caspar, an army officer. He had one Jewish grandparent. Caspar’s mother named Emmy (birth name Hentschel) was twelve years younger than his father. She was the daughter of a hotelier. She gave birth to three sons: Theodor, Hans and Horst. Emmy passed away of a pneumonia at the age of 25 years, when Horst was only 18 months old.

He was raised by an aunt in Berlin, Nora Hartwich, and attended the Treitschke-Reform-Realgymnasium in Berlin-Wilmersdorf. In 1932 he took his abitur (school leaving exam), but did not go to university, since he had already decided to be an actor.

In 1933, the handsome young man was taken up by the director Saladin Schmitt and became a leading man at the Bochumer Stadttheater. In Bochum, he performed in plays by William Shakespeare and Friedrich Schiller, often in youthful heroic roles.

Under the Nazi regime's anti-Jewish Nuremberg Laws, Horst Caspar was classed as a Mischling (mixed race) of the second degree. Despite his part-Jewish ancestry, he continued to work as an actor. This was partly because he enjoyed the protection of Saladin Schmitt, who as a homosexual was no friend of the Nazi regime.

But he also enjoyed the patronage of Propaganda Minister Joseph Goebbels. Goebbels personally vetted cases of part-Jewish performers and allowed a number of popular part-Jewish actors to continue working.

When he gave his final performance in Bochum in Richard II in 1939, he received 108 curtain calls. He moved to Munich where he was working at the Munich Kammerspiele (1938-1940). 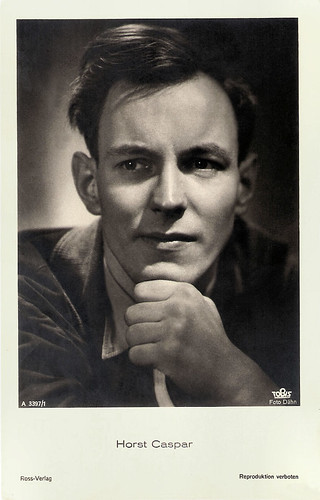 A 'rare and special privilege'


In 1940, Horst Caspar joined one of the most important German theatres of the time, the Schiller Theatre in Berlin. He worked there until 1944 when the theatre was closed as a result of the war.

In 1942 he also performed at the prestigious Burgtheater in Vienna. This was regarded as a 'rare and special privilege' for a part-Jewish actor in a city where all Jews had been purged from cultural life.

In 1943, Caspar was engaged by film director Veit Harlan to play the young Prussian field marshal August Neidhardt von Gneisenau in Kolberg (Veit Harlan, 1945). He defended the fortress town of Kolberg against the troops of the French emperor Napoleon Bonaparte in 1807, alongside the city’s mayor (Heinrich George) and lieutenant Schill (Gustav Diessl). The film entered production in 1943, and was made in Agfacolor with high production values.

At a cost of more than eight million marks, it was the most expensive German film of World War II, with the actual cost suppressed to avoid adverse public reaction. Produced on the orders of Minister of Propaganda Joseph Goebbels, it was intended as a Nazi propaganda piece to bolster the will of the German population to resist the Allies. The result was a monumental, but historically inaccurate propaganda film, Kolberg (Veit Harlan, 1945), one of the last films of the Third Reich.

This was only Caspar's second leading film role, but it is the one for which he is now best remembered, despite the fact that film was finished only shortly before the end of World War II and was seen by few people at the time.

After the end of WW II, Caspar moved to Düsseldorf where he joined the ensemble of the Düsseldorfer Schauspielhaus. In 1949 he played the leading role in the film Begegnung mit Werther (Karlheinz Stroux, 1949).

His last role was in the crime film called Epilog. Das Geheimnis der Orplid/The Orplid Mystery (Helmut Kautner, 1950). He played a reporter named Peter Zabel who wants to solve the reasons behind a ship disaster.

Caspar also performed the character of Goethe’s Faust in a radio play produced by the German radio station WDR in 1949 and 1952. In 1952 he recorded an LP of poetry readings, including works by Schiller and Goethe.

In December 1952, Horst Caspar suddenly died of a stroke in Berlin. He was only 39. Tragically, his son Frank died on the day of his father's funeral, aged eight. His widow, Antje Weisgerber, had a successful film career extending into the 1970s. All three are buried at St Anne's churchyard in Berlin-Dahlem. 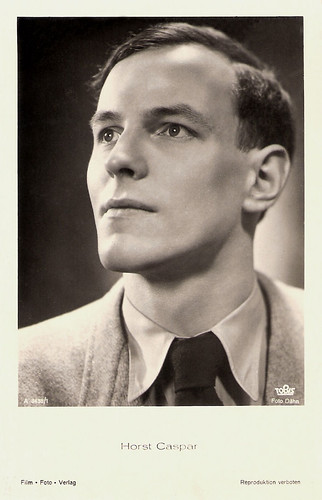