The profoundly sensitive acting of Austrian-British actress Elisabeth Bergner (1897-1986) influenced the German cinema of the 1920s and 1930s. 'Die Bergner' as she was known in Germany, specialised in Hosenrollen (androgynous trouser roles), in films and on stage. Nazism forced her to go in exile, but she worked successfully in the West End, and later on Broadway. After the war, she returned to Germany, where she became one of the grande dames of film, television and cinema. 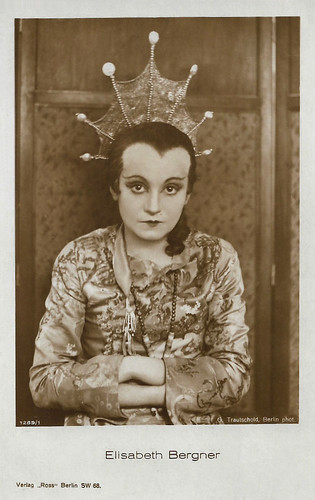 German postcard by Ross Verlag, no. 1289/1, 1927-1928. Photo: G. Trautschold, Berlin. This was a postcard for the stage play Kreidekreis (Chalk Circle), a Chinese fairy tale by German writer Klabund (or Alfred Georg Hermann Henschke). After the first night in January 1925 in Meissen with Klabund's future wife Carola Neher in the lead, Elisabeth Bergner henceforth played the lead, e.g. at the Deutsches Theater in Berlin from October 1925. The play was very successful and inspired two operas by Zemlinsky and Mors, as well as Brecht's Caucasian Chalk Circle. 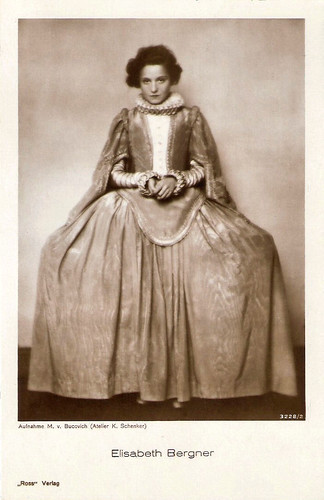 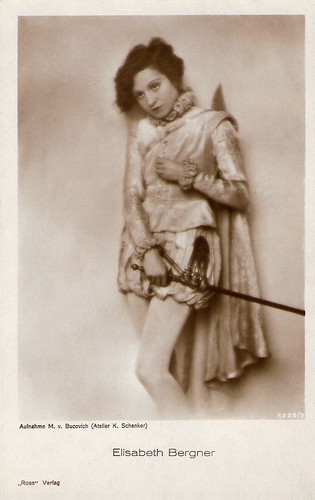 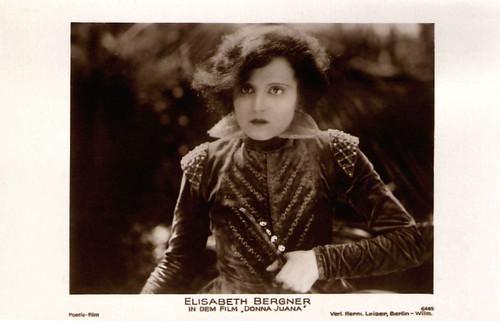 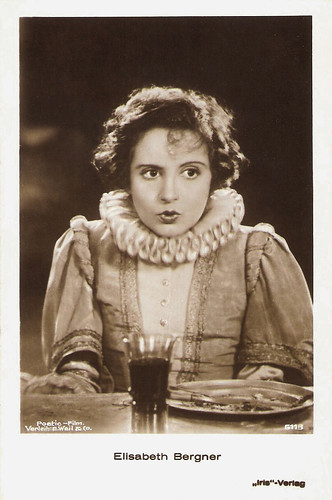 Elisabeth Bergner was born as Elisabeth Ettel in 1897 in Drohobycz, Austria-Hungary (now Drogobych, Ukraine). She was the daughter of a merchant, Emil Ettel, and his wife Anna Rosa Wagner. Soon after her birth, the family, whose surname had been changed to the more German-sounding Bergner, moved to Vienna.

In 1911 she was enrolled at a private acting school and from 1912 to 1915 she attended the Academy for Music and the Performing Arts. She started acting in Innsbruck in 1915. By the end of that year she had already appeared in the major role of Nora in Henrik Ibsen’s A Doll’s House.

In 1916 she moved to Zürich, where she performed at the highly-regarded Stadttheater (Municipal Theatre). She also worked as an artist's model. She posed for the expressionist sculptor Wilhelm Lehmbruck, who apparently committed suicide in 1919 because Bergner rejected his advances. She eventually moved to Munich, and in 1921 to Berlin.

On stage as Rosalind in William Shakespeare's As You Like It (a role in which she played a record 566 consecutive performances), she took Berlin by storm and won plaudits not only from theatregoers but also from such critics as Kurt Tucholsky.

She made her film debut in Der Evangelimann/The Evangelist (Holger-Madsen, 1924) with Paul Hartmann. Under Max Reinhardt's direction she reached international fame in the stage production of Saint Joan (1924) by George Bernard Shaw.

She specialised in playing Hosenrollen (women in trousers with childlike or boyish traits), and captivated spectators and critics in such stage productions as Romeo and Juliet, Queen Christine, and Camille.

Hungarian director Paul Czinner, who had come to Germany from Budapest via Vienna, gave Elisabeth Bergner a role in Nju - Eine unverstandene Frau/Husbands or Lovers (Paul Czinner, 1924). The film was an instant success, and Czinner became both her artistic and private partner. 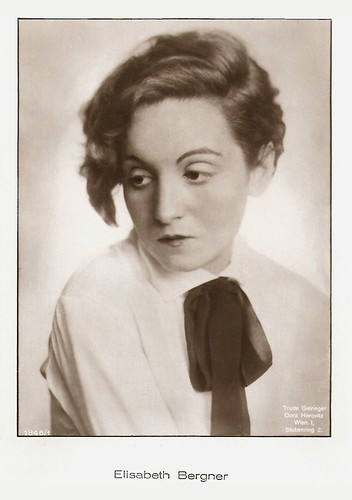 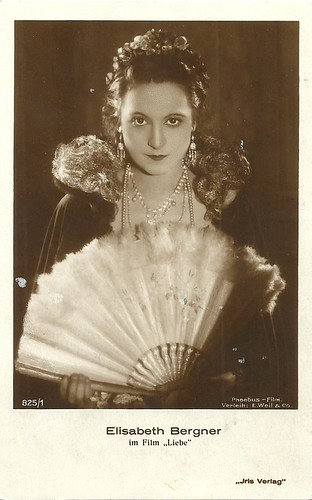 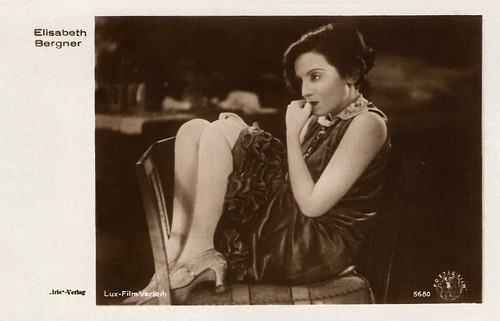 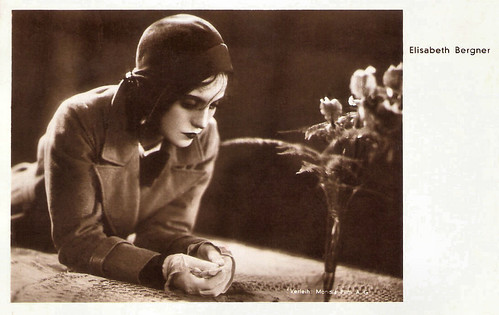 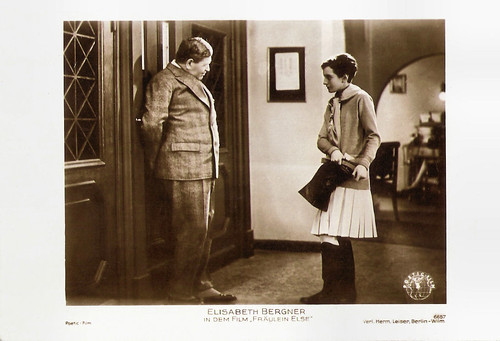 German postcard by Verlag Herm. Leiser, Berlin-Wilm, no. 6657. Photo: Poetic-Film. Publicity still for Fräulein Else/Miss Else (Paul Czinner, 1929), with Albert Steinrück and based on the play by Arthur Schnitzler.

Charming her audience in an almost hypnotic way

With the coming of sound, Elisabeth Bergner began to portray a more sentimental and delicate woman. Soon critics labelled her characters as fragile, emotional, or nervous. Bergner acted her roles in such a manner as to charm her audience in an almost hypnotic way.

Czinner allowed her to play the whole gamut of emotional experience in a series of films. The peak of her career is represented by her work in two films. In the first, Ariane (Paul Czinner, 1931), an adaptation of a novel by the French author Claude Anet, Bergner played a girl who plunges into adventure with an older, more experienced man (Rudolf Foster).

The second is the drama Der träumende Mund (Paul Czinner, 1932), an adaptation of a play by Henri Bernstein. Here, Bergner played a sensitive, pure woman who cannot escape her passion for a musical virtuoso, but does not want to hurt her loving husband. This film was remade by Czinner in 1937 as Dreaming Lips, with Bergner again in the leading role.

When the National Socialists came to power in 1933, Bergner, who was in England working on a new film, did not return to Berlin. Bergner and Czinner, who were both Jews, went in exile in London, where they had married in 1931. She particularly infuriated the Hitler regime by encouraging other famous actors to leave Germany, even sending them money to help them escape.

Rapidly learning English, she was soon able to resume her former stage and screen career. Her stage debut as Gemma Jones in Escape Me Never (1933) was met with great enthusiasm, and she repeated the role in New York (1935) and again for the film version, Escape Me Never (Paul Czinner, 1935), which earned her an Oscar nomination for Best Actress. Another film The Rise of Catherine the Great (Paul Czinner, 1934) was banned in Germany because of the government's racial policies, reported Time magazine (26 March 1934).

Her stage work in London included The Boy David (1936) by J.M. Barrie, his last play which he wrote especially for her. She repeated her stage role of Rosalind, opposite Laurence Olivier's Orlando, in As You Like It (1936), the first sound film version of William Shakespeare's play, and the first sound film of any Shakespeare play filmed in England. Bergner had previously only played the role on the German stage, and several critics found that her accent got in the way of their enjoyment of the film, which was not a success. In 1938 she became a citizen of Great Britain. 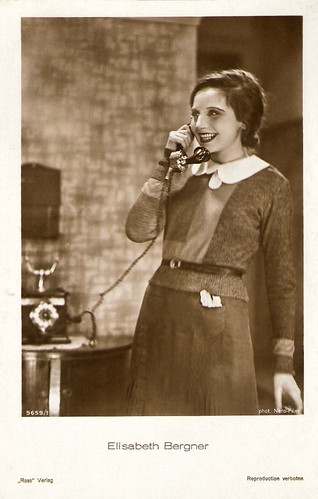 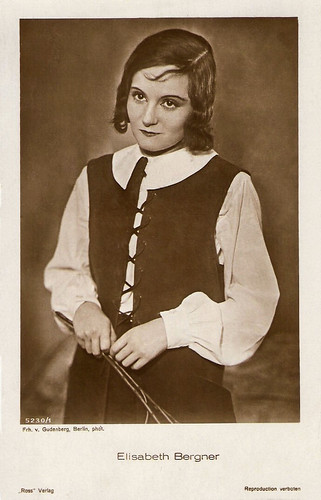 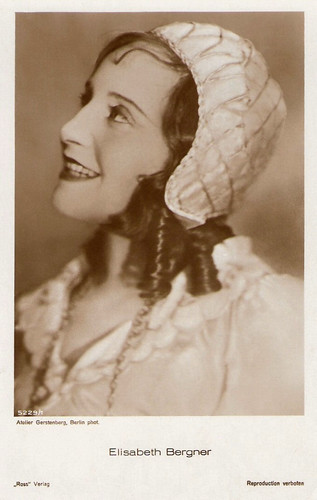 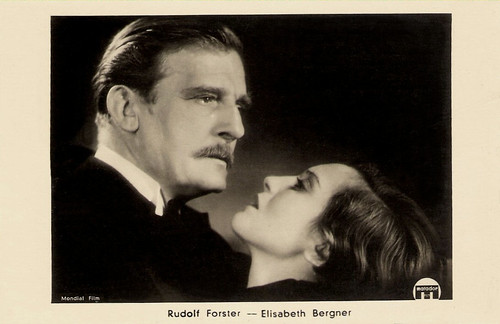 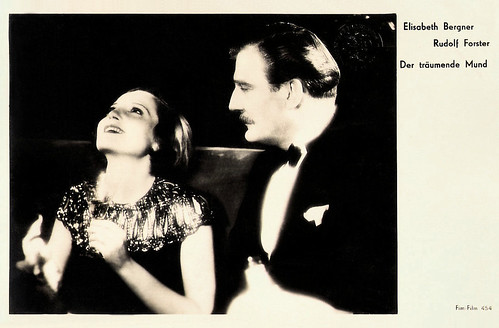 In 1940, Elisabeth Bergner and her husband emigrated to the United States. There, Bergner had to begin her career anew. While Czinner had no difficulty finding work in Hollywood, it was only at the end of 1941 that she herself received a major role in the anti-Nazi film Paris Calling (Edwin L. Marin, 1941) with Randolph Scott, which was not a success.

She returned to the stage and scored a Broadway triumph in The Two Mrs. Carrolls, which was performed more than three hundred times in 1943–1944 and earned her the Delia Austrian Medal of the Drama League of New York.

An incident with a fan/aspiring actress, while Bergner was performing in The Two Mrs. Carrolls on Broadway, inspired Mary Orr to write her short story The Wisdom of Eve. The story was ultimately filmed as All about Eve (Joseph L. Mankiewicz, 1950). In the story Eve does not get a comeuppance - as was required by the Hollywood Production Code for the film - but gets away with everything and is last seen heading to Hollywood with a thousand dollar a week contract in her pocketbook.

After the war, Bergner worked in New York, for instance in the title role of John Webster's The Duchess of Malfi in 1946. In 1950 she returned to England, and in 1954 temporarily to Germany. For nearly two decades she performed intermittently in German and Austrian theatres, and in 1970 she made her debut as a director.

In 1961, after a 20-year absence, she made a come-back for the cinema. The child-woman had been transformed into a charming, though occasionally unfathomable, old lady. Among her later film appearances were Die glücklichen Jahre der Thorwalds/The Happy Years of the Thorwalds (John Olden, Wolfgang Staudte, 1962) with Hansjörg Felmy, Cry of the Banshee (Gordon Hessler, 1970) starring Vincent Price, Strogoff (Eriprando Visconti, 1970), Der Fussgänger/The Pedestrian (Maximilian Schell, 1973), and Der Pfingstausflug/The Pentecost Outing (Michael Günther, 1978) with Martin Held.

Elisabeth Bergner won awards at the Berlin Film festivals of 1963 and 1965. She became the first actress to win the Schiller Prize (1963) for contributions to German cultural life. She also received the Ernst Lubitsch Prize in 1979, and the Eleonora Duse Prize of the city of Venice in 1982. In the Berlin district of Steglitz a city park was named after her.

Husband Paul Czinner died in 1972. Her last TV performance was the lead role in Wenn ich dich nicht hätte/When I Wouldn't Have You (Konrad Sabrautzky, 1984) with Rudolph Platte. Elisabeth Bergner passed away in 1986 in her London home, aged 88. A year later her memoirs, Bewundert viel und viel gescholten (Greatly admired and often cursed), were published. The book received favourable reviews. 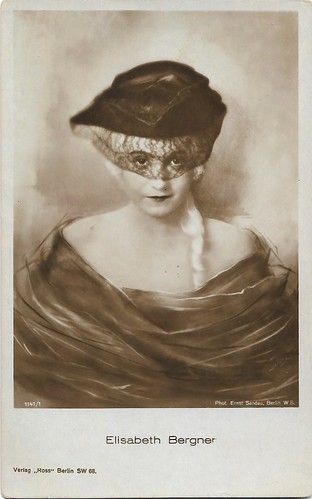 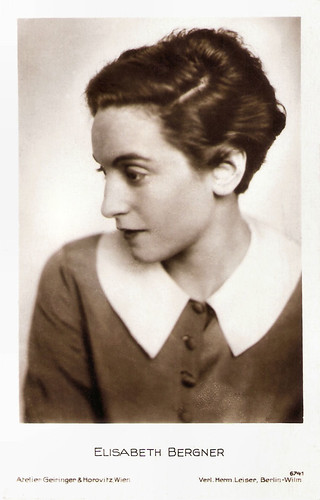 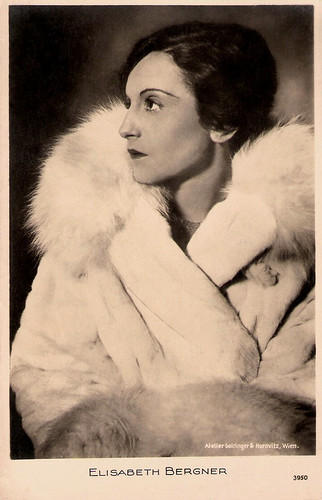 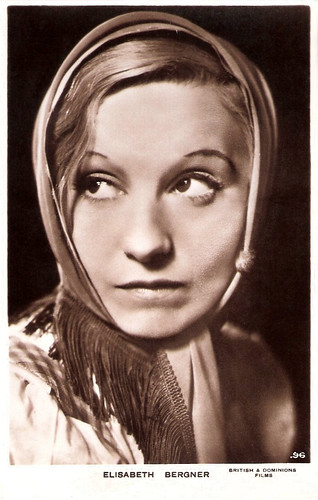 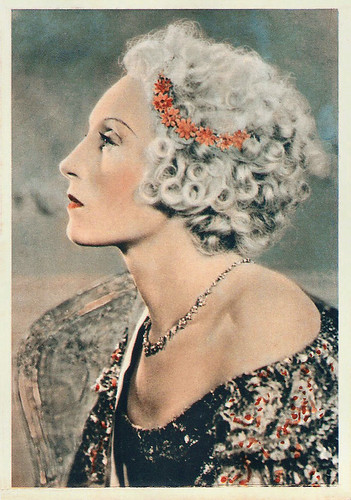 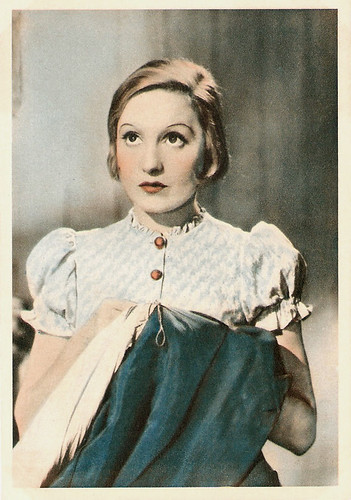 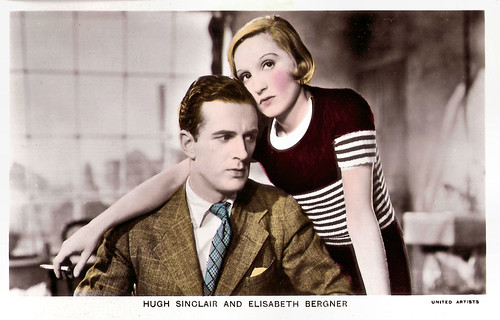 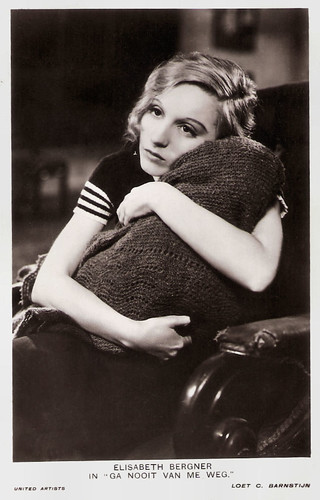 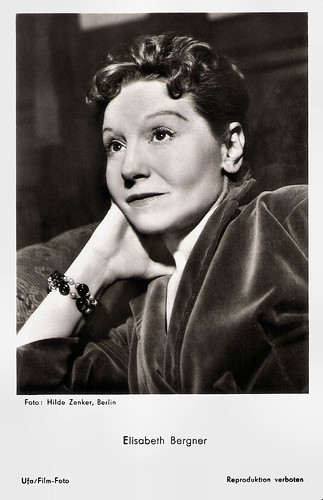 Hello, my Friend! It has been awhile since I last visited your blog. I apologize for being so out of touch. This year has been particularly difficult.

Once again I am amazed at the incredible research and work you put into your entries. Amazing. I enjoyed this one very much. :D