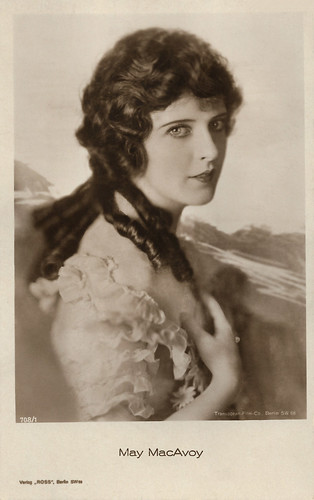 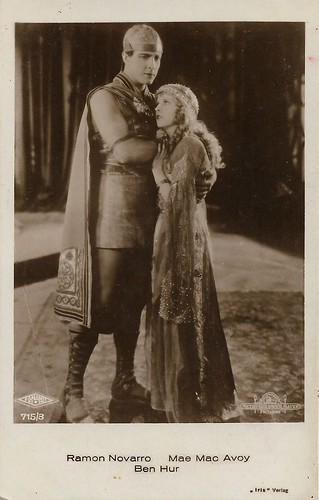 Austrian postcard by Iris Verlag, no. 715/3. Photo: Fanamet / Metro-Goldwyn-Mayer. Ramon Novarro and May McAvoy in Ben-Hur: A Tale of the Christ (Fred Niblo, 1925). 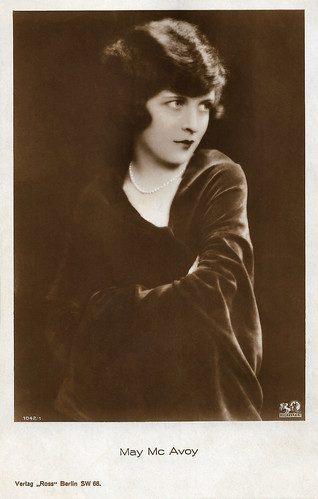 
May McAvoy was born in New York City in 1899, within a well-to-do family that owned and operated a livery stable.

May left school at the age of 17 to act in her first role in the film Hate by Walter Richard Stahl. From then she had small parts, even uncredited roles in films, for various Californian film companies, until she did a few films for the J. Stuart Blackton Company.

In 1921 she acted e.g. in Chester M. Franklin's A Private Scandal, which script had been purposely written by Hector Turnbull for McAvoy. The film was the first of a series of seven films at Realart Pictures, in which McAvoy constantly starred, directed either by Frank O'Connor or William Desmond Taylor. The apparent success of these films convinced Paramount to lure her away with a contract. Petite as she was, McAvoy was independent enough to defend her interests.

In 1922 May McAvoy started to act at Paramount/ Famous Players-Lasky, where she already had done an occasional film in the past. It was William C. DeMille who mostly directed her at Paramount: in Clarence (1922), starring Wallace Reid and Agnes Ayres, Grumpy (1923), starring Theodore Roberts, Only 38 (1923), in which she herself had the lead, and The Bedroom Window (1924), another starring role with Malcolm McGregor and Ricardo Cortez as her co-stars. It was probably McAvoy's last film for Paramount.

In 1923 May McAvoy got into a row with director-producer Cecil B. DeMille, because she refused the role in his film Adam's Rib, as it meant her hair would be bobbed and she had to show partial nudity. Instead, she complained parts she wanted were given to other actresses: to Betty Bronson in Peter Pan and to Betty Compson in Little Minister. After she had been suspended, she bought off her contract and started freelancing. 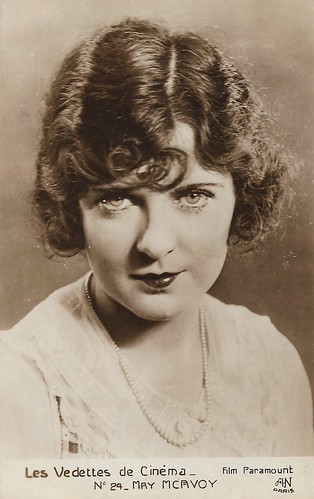 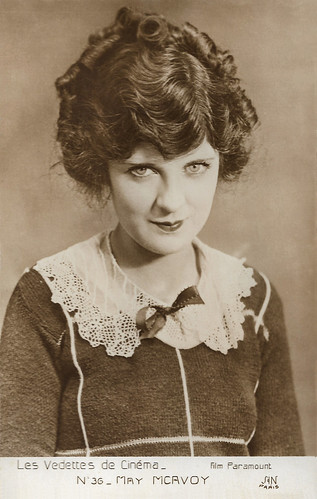 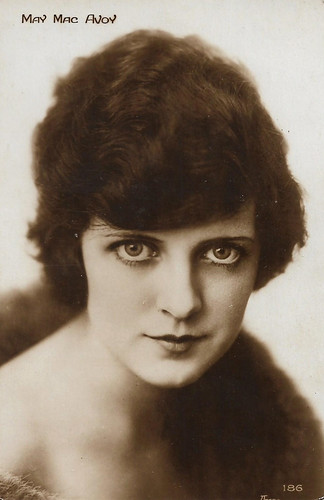 Two years after, McAvoy had an important part in what is often credited as the first sound feature, The Jazz Singer (Alan Crossland 1927), which, actually, was a part-talkie, in which most actors, including McAvoy, did not talk yet. She played Mary, girlfriend of the male lead, played by singer-actor Al Jolson.

Afterward, May McAvoy did act in all-talkie movies, such as The Lion and the Mouse (Lloyd Bacon, 1928), and The Terror (Roy Del Ruth, 1928), shot at Warner's studio in Burbank with failing technology, distorting her voice. Not so much because of her voice, but on request of her new (1929) husband, Maurice Cleary, banker and treasurer of United Artists, she withdrew to private life and took care of their son, Patrick (1932-2012).

Despite some sources write they remained married until his death, Wikipedia has convincing proof they divorced in 1940. It also explains that in 1940 McAvoy went back to the set, but had to satisfy with bit parts. Hollywood was not kind to its former stars. Still, until 1959 she had small parts, even uncredited ones - her last part being an extra in the remake of Ben-Hur (1959) by William Wyler, himself a former assistant-director on the silent version.

May McAvoy died in 1984, in Los Angeles, as the consequence of a heart attack one year earlier. She was interred in the Holy Cross Cemetery in Culver City. May McAvoy has a star on the Hollywood Walk of Fame at 1731 Vine Street. 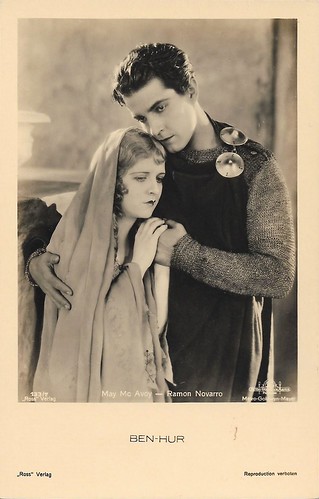 German postcard by Ross Verlag, no. 133/7 Photo: Metro-Goldwyn-Mayer. Ramon Novarro and May McAvoy in Ben-Hur: A Tale of the Christ (Fred Niblo, 1925). 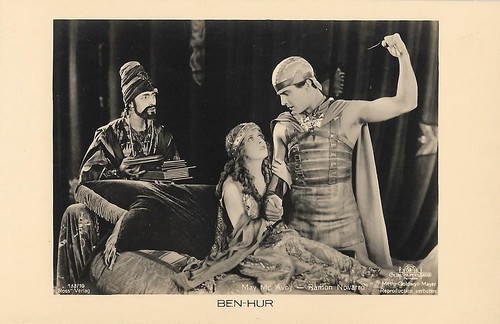 German postcard by Ross Verlag, no. 133/10 Photo: Metro-Goldwyn-Mayer. Ramon Novarro and May McAvoy in Ben-Hur: A Tale of the Christ (Fred Niblo, 1925). 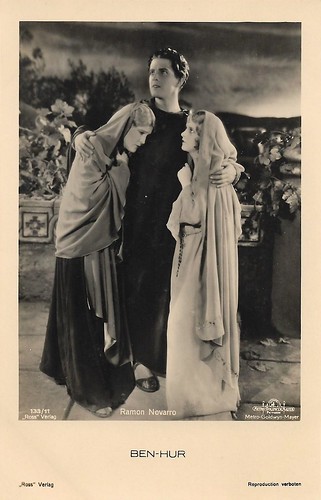 German postcard by Ross Verlag, no. 133/11. Photo: Metro-Goldwyn-Mayer. Ramon Novarro, Claire McDowell and May McAvoy in Ben-Hur: A Tale of the Christ (Fred Niblo, 1925). 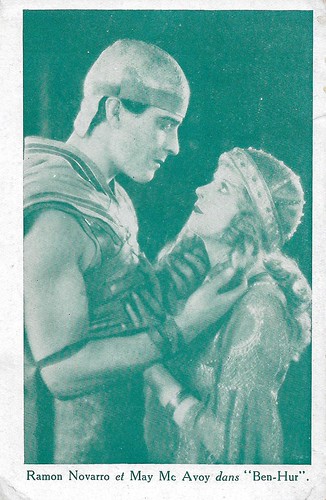 French postcard for the Cinéma Madeleine. Ramon Novarro and May McAvoy in Ben-Hur (Fred Niblo, 1925). 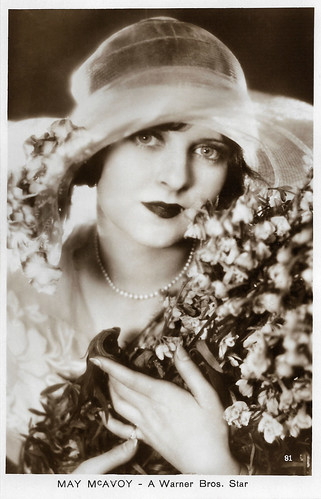