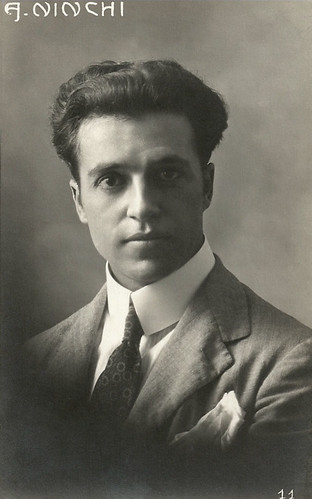 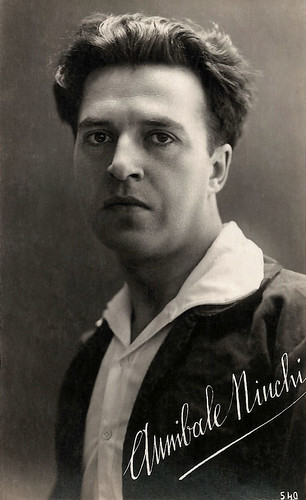 
Annibale Ninchi was born in Bologna, Italy, in 1889 as the son of Arnaldo Ninchi and Lidia Bedetti. Father Arnaldo was from Ancona and worked as colonel of the artillery.

In 1903 Annibale registered at the Regia Scuola di recitazione Tommaso Salvini in Florence, directed by Luigi Rasi. He stemmed from a family of actors. His elder brother Carlo Ninchi (1887-1967) and his cousin Ave Ninchi (1915-1997) were actors as well.

In 1910 Annibale became Mason at the Loggia XI Settembre 1860 of the Oriente in Pesaro. In the same year he started his stage career as ‘primo attore giovane’ (first young actor) in the company of Giacinta Pezzana en Flavio Andò. In 1911-1913 he was ‘first actor’ at the Roman Teatro Argentina, and in 1914-1916 he was artistic leader of the Compagnia drammatica in Rome.

In the meantime Ninchi had also become actor in silent cinema. His first part he played in Carmen (Gerolamo Savio, 1909) for the company Film d’Arte Italiana. Ninchi played the toreador Escamillo, while the leads were for Vittoria Lepanto as Carmen and Dante Testa as Don José. Some scenes were shot in Vergato near Bologna, Ninchi’s hometown.

In 1914 Ninchi started to act at Cines on a more regular basis, first in Ninna nanna/Il sorriso dell’innocenza/The Lullaby/The Smile of Innocence (Guglielmo Zorzi, 1914). He played Giovanni, the editor of a socialist magazine, who marries Maria (Pina Menichelli). They have a child called Speranza (hope), but when the family loses its capital, the journal goes broke and conservatory newspapers refuse to help him, the couple decides to kill themselves. The smile of the child wakened up by the mother’s lullaby ('ninna nanna' in Italian) saves the family.

In the same year Ninchi acted again opposite Pina Menichelli in Il grido dell’innocenza/The Cry of Innocence (Augusto Genina, 1914), in which Menichelli is a scheming adventuress who separates a noble family father and his young male secretary (Ninchi), who loves the family’s daughter (Lea Giunchi). The evil woman wants to marry the father for his money and when the daughter opposes, the golddigger shoots the father and accuses the daughter, who gets imprisoned. But in the end justice calls. Menichelli’s part seems to have been a prologue to her later diva and femme fatale roles with the company Itala.

In Turin, Ninchi acted at Ambrosio in the films La Gorgona/The Gorgon (Mario Caserini, 1915) and I pagliacci (Francesco Bertolini, 1915). La Gorgona was based on the homonymous play by the then popular Italian playwright Sem Benelli, and starred the French actress Madeleine Céliat as a kind of Vestal Virgin in the Middle Ages, who needs to keep a fire burning for the return of her co-citizens fighting the Saracenes. She neglects her duty when she falls in love with a Florentine man (Ninchi). The film was an opulent production with a much praised choreography of the masses and with a lauded performance by Céliat.

In I pagliacci, based on Leoncavallo’s opera, Ninchi played Silvio, the man with whom Nedda (Bianca Virginia Camagno) falls in love with, though she is married to travelling clown Canio (Achille Vitti). When Canio, warned by the jealous Tonio, catches the lovers, he first kills Nedda, then Silvio.

During the last years of the First World War, Ninchi acted in L’ombra del sogno (Rastignac aka Vincenzo Morello, 1917) starring the dilettante actress Marchioness Clelia Antici-Mattei. In La piccola fonte/The Little Well (Roberto Roberti, 1917) the acclaimed film diva Francesca Bertini had the female lead. Ninchi played an aspiring writer who dumps his fragile wife for a princess, after which his frail, good wife loses her mind.

In the same year 1917, Ninchi also acted in the romantic comedy Le mariage de Chiffon/The Marriage of Chiffon (Alberto Carlo Lollo, 1917), released in 1918 and based on the novel by Gyp. The press praised in particular Ninchi’s performance as the love interest of the protagonist, played by Mary Bayma-Riva. Bayma-Riva and Ninchi were reunited in Il pastor fido/The Loyal Shepherd (Telemaco Ruggeri, 1918), an archaic idyll based on a late 16th century poem. Tito Alacci in the journal Film raved about the beauty of the actresses and actors, including Ninchi, who had the male lead. 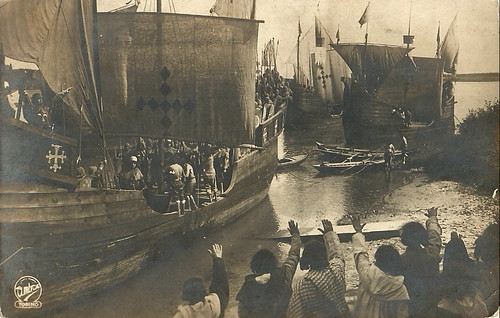 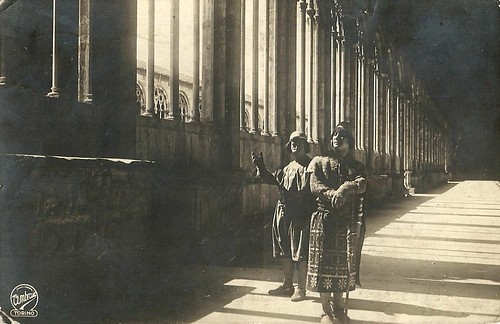 Italian postcards. Photos: Ambrosio Film. Publicity stills for the Italian silent film La Gorgona/The Gorgon (Mario Caserini, 1914), scripted by Arrigo Frusta and starring Annibale Ninchi and Madeleine Céliat. The film was based on a play by Sem Benelli. The film was released in Rome on 9 March 1915.

In 1926-1929 Ninchi toured in Alexandria in Egypt. In 1936 he performed Oedipus at Colonus at the Greek theatre of Siracuse for the Istituto del dramma antico. In 1937 he played Aligi in La figlia di Jorio/The Daughter of Jorio by D’Annunzio, and again in Siracuse, Euripides' Cyclops.

In the mid-1930s Ninchi returned to the film set. First he played the protagonist in Fiordalisi d'oro'Golden Cornflowers (Gioacchino Forzano, 1936), and then in the film he is well remembered for: Scipione l’Africano/Scipio Africanus (Carmine Gallone, 1937). It was the first epic shot in the then new film studios of Cinecittà.

Scipione l’Africano/Scipio Africanus (Carmine Gallone, 1937) contained gigantic sets and mass scenes, culminating in the recreation of the Battle of Zama. Scipio, the proud, heroic and honest hero, was clearly designed as a mirror figure to the Duce, thus giving the Italians an alibi to invade Africa. The film was not a huge box office success and this clashed of course with Mussolini’s aspirations of mirroring his own ‘Third Rome’ with the First (i.e. Ancient) Rome.

Only from the late 1940s on, Roman Antiquity would become popular again as setting for historical films, starting with Fabiola (Alessandro Blasetti, 1949) and Quo vadis? (Mervyn LeRoy, 1951). Ninchi might have been affected by the flop of Scipione l’Africano. After a part in the Italo-French coproduction Adrienne Lecouvreur (Marcel L’Herbier, 1938) he focused on stage again.

He became ‘capocomico’ of the Compagnia Ninchi-Abba-Pilotto, and in 1939 he was the protagonist of Il ventaglio/The range by Goldoni, Aminta by Tasso, Ajax by Sophocles and Hecuba by Euripides. In 1944-1945, after the liberation of Rome, Ninchi staged La guerre de Troie n’aura pas lieu/The Trojan War will not take place by Jean Giraudoux at the Teatro Eliseo. He also acted in the Shakespeare tragedies Othello, Hamlet, Macbeth and King Lear.

In 1948-1950 he was artistic manager of the Istituto del dramma antico in Siracuse, and in 1952 he toured Malta and Tripoli with the company Ninchi-Picasso. Later he played in Veglia d’armi/Vigil of Arms by Diego Fabbri and toured all over Italy with the play. Also popular were his performances in Edmond Rostand’s Cyrano de Bergerac and Neri Chiaramantesi in Sem Benelli’s La cena delle beffe/The Jesters' Supper.

In 1958, Ninchi acted in the play Veglia la mia casa, Angelo/Look homeward, angel written by Ketty Frings and directed by Luchino Visconti. After Ariosto’s Lena, staged in 1960 at the Teatro della Pergola in Florence, Ninchi focused in film acting again for a while. 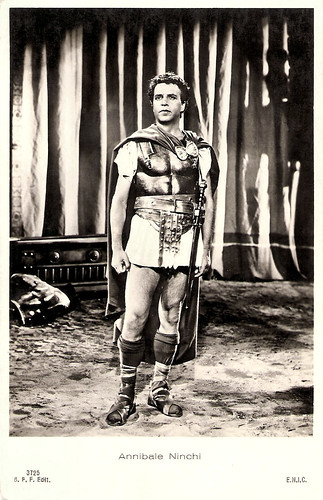 Fellini invited him to play the father of the protagonist Marcello (Marcello Mastroianni) in La dolce vita (1960). Ninchi plays an aged travelling salesman who visits modern Rome and, taken along by his son, he enjoys a cabaret where the French dancer Fanny (Magali Noël) performs and Polidor has an act with a trumpet and countless balloons. The father dances and jokes with the French girl and drinks too much champagne, so he has a mild heart attack at the dancer’s house. Marcello rushes to him and tries to persuade him to stay, but the father, aloof, sits still, watching the city, then takes a cab and leaves. Marcello’s attempt to reunite with his father is broken off.

A reprisal of his role as the protagonist’s father occurred in Fellini’s Otto e mezzo/8½ (1963), this time together with Marcello’s mother (Giuditta Rissone), who has a bigger part in the film. The protagonist, the film director Guido (again Mastroianni) meets his parents in a cemetery. In the end they join the crowd that descends a staircase to join in for a polonaise around the circus arena, as being part of Guido’s world.

Ninchi last stage role was in 1965 in Sophocles’ Antigone, after which he retired. He also worked for the Italian and the Swiss radio, acting in various stage plays such as Beckett’s Waiting for Godot. He also played on television, recorded monologues of his plays on records and wrote numerous stage plays.

In his autobiography Annibale Ninchi racconta... (Pagine spregiudicate di un chierico-vagante)/Annibale Ninchi Tells... (Unscrupulous pages of a wandering cleric), he described the life of actors in the early 20th century as well as his own experiences in those years.

Finally, Ninchi taught several years at the Accademia Nazionale di Arte Drammatica Silvio D'Amico in Rome. He was decorated Commendatore, then Grande Ufficiale of the Republic, by Italian president Einaudi.