Herbert Rawlinson (1885-1953) was a British actor who knew a rich career in American silent cinema, and less so in sound film. He began his film career as a star of the pioneering Selig company. Rawlinson played all in all in some 400 films. 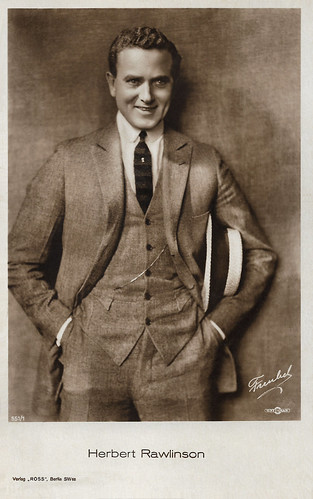 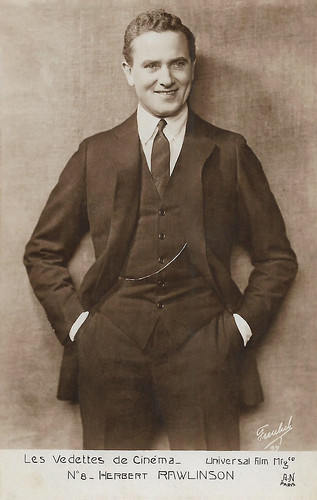 
Herbert Rawlinson was born in Brighton, UK, in 1885. According to English Wikipedia, he sailed on the same ship to the US as Charlie Chaplin (Chaplin sailed to the US for the first time in 1910, on his first US tour with the Fred Karno theatre company).

German Wikipedia adds that Rawlinson began his show career in the circus before he made his film debut in 1911 as the male lead Hank Gibson opposite Tom Mix in a supporting part as the sheriff in the short film The Cowboy and the Shrew, produced by Selig Polyscope and released in April 1911. Mix was already one of Selig's leading men from 1909 onward. In The Cowboy and the Shrew, Rawlinson plays a good-hearted cowpuncher who is tied up on instigation of a rancher's daughter who scorns his love, but he manages to escape and convince the girl.

Rawlinson became one of Selig's main actors, and had an enormous output of shorts there, already some 33 films in 1911 and some 40 titles in 1912. He alternated starring roles with major supporting parts, opposite such actors as Hobart Bosworth, Tom Santschi, and Sydney Ayres.

In 1913 the output slowed down to some 17 titles, as of late 1913 he appeared in his first feature, The Sea Wolf, produced and directed by, and starring, Hobart Bosworth, based on a Jack London novel, and now a lost film. Between the notoriously cruel captain, Wolf Larsen (Bosworth) and a shipwreck survivor, the gentle Humphrey Van Weyden (Rawlinson), a bond is created, against all odds. Jack London collaborated on this production and played a sailor in the film. After this first version, many other adaptations would follow in 1920, 1926, 1930, and 1941, plus TV versions.

Rawlinson's performance in The Sea Wolf didn't mean he stopped acting in shorts. Between 1913 and 1917 he continued to act in short films at Selig but also at other smaller companies such as Bison. In addition to 22 shorts Rawlinson did in 1914, he also acted in five features: four were directed by Otis Turner and produced by Universal: The Spy, The Opened Shutters, Damon and Pythias, and Called Back, while the fifth was again a Bosworth production: Martin Eden. Rawlinson had the male lead in The Spy and Called Back and major supporting parts in the other three.

Based on a James Fennimore Cooper novel, The Spy is about an American agent working for General Washington during the War of Independence, who pretends to be a British spy and eventually trades places with a condemned British officer, risking the gallows. According to Moving Picture World (see IMDb), he is rescued in the nick of time. In Called Back, Rawlinson plays a blind man who is the witness of murder by two Italian anarchists on a young, rich man. The victim's sister (Ann Little) who also witnesses the murder, faints and loses her mind. Years after, the formerly blind man and the sister meet and together they unravel the devious plot of the two murderers and their aids. 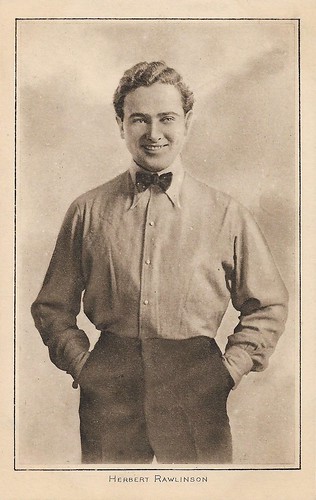 British postcard in the 'Pictures' Portrait Gallery by Pictures Ltd., London, no. 82.


In 1915 Herbert Rawlinson again did a string of shorts but only one feature, The Black Box, again an Otis Turner film, this time a Sci-Fi drama about a private detective (Rawlinson) who investigates a bizarre murder case involving mysterious messages delivered in a small black box by the killer. Again, Ann Little and William Worthington were co-actors.

In 1916, in addition to some 14 shorts for Universal, often directed by former actor William Worthington, Little Eve Edgarton (Robert Z. Leonard, 1916) was the only feature. While doing his last shorts at Universal in 1917, Rawlinson mainly focused on features. In 1918 he only did features at Universal, such as Smashing Through (Elmer Clifton, 1918) and The Flash of Fate (Elmer Clifton, 1918), and alternated Western and mountain dramas with comedy.

During 1918, though, Rawlinson stopped his intense career with Universal, and started freelancing, hopping from one company to another. He no longer was solely a tough action hero, but also paired with leading ladies such as Mabel Normand, Marguerite Marsh, and Catherine Calvert. Several of his films were directed by film pioneer J. Stuart Blackton, such as A House Divided (1919), Man and his Woman (1920), and the class conflict-driven Passers-By (1920).

In 1920 Herbert Rawlinson launched onscreen the character of detective Craig Kennedy in the 15-episodes crime serial The Carter Case, which would have many remakes on the big and the little screen. In 1923 Blackton, who had gone independent in 1917, would return to his old company Vitagraph. Herbert Rawlinson himself, after making films for Famous Players, First National and many small companies, and not always in the lead anymore, returned to Universal in 1922, where he got star billing again and films were draped around his persona.

His first film was Tod Browning's Man under Cover (1922), a crime film that still survives and deals with a crook who makes good, and sets up a trap to outwit two crooks who have gained thousands from a fake oil well (the plot reminds a bit of The Sting). Barbara Bedford is his love interest. In subsequent films, Rawlinson was paired with actresses Virginia Valli, Lillian Rich, Eileen Percy, Katherine Perry, Claire Adams, and Helen Ferguson. 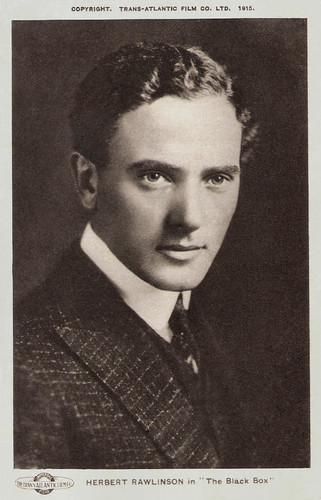 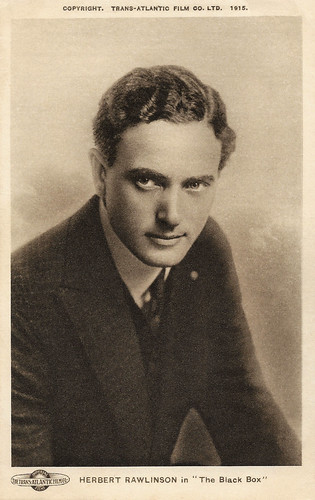 Directed by the worst director of all time


Herbert Rawlinson started to do more comedies and mystery films in the mid-1920s. After the mystery film Dark Stairways (Robert F. Hill, 1924), Rawlinson mingled Universal again with other companies such as MGM and Fox. In The Adventurous Sex (Charles Giblyn, 1925), he plays a sweetheart who spends too much time obsessed with his aeroplane, so his neglected girlfriend (Clara Bow) begins to enjoy a flapper lifestyle and soon an adventurer (Earle Williams) becomes a competitor.

In the years 1925-1927, Rawlinson's female partners were Madge Bellamy, Alma Rubens, and Betty Compson, while he played opposite Priscilla Dean and the famous comedians Stan Laurel and Oliver Hardy in Slipping Wives (Fred Guiol, 1927). He was also Claire Windsor's love interest as a widower cavalry lieutenant, who remarries but his son (Jackie Coogan) opposes the new stepmother.

In the same year 1927, Herbert Rawlinson took a break from the film sets. From 1929, he performed on Broadway, and this for several years, returning to Hollywood only by 1933, when the sound film had become well established.

Rawlinson transformed himself into a character actor but acted mainly in supporting roles. Only in smaller films such as Enlighten Thy Daughter (1934), Hitch Hike to Heaven (1936), and Blake of Scotland Yard (1937), he still had the male lead.

In his last years, Rawlinson worked for radio on such programs as 'Cavalcade of America' and 'Escape'. In 1950-1951 Rawlinson also worked as a presenter and narrator for the CBS radio show 'Hollywood Star Playhouse'.

In 1953, Herbert Rawlinson died of lung cancer. Just one day before his death in 1953, he finished the film Jail Bait with the "worst director of all time", Ed Wood. Rawlinson was married to Roberta Arnold in 1917 but they divorced in 1922 or 1923 (sources differ). Rawlinson also was married to Loraine Abigail Long in 1924 (divorced in 1947). They had two children, David and Sally, who both had a short film career in the 1940s. 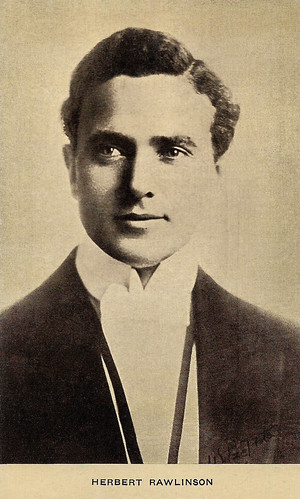 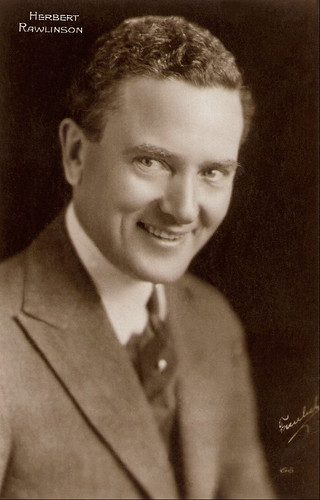