Raymond Griffith (1895-1957) was an American silent film comedian, known for films such as Paths to Paradise (1925) and Hands Up! (1926). The 'Silk Hat Comedian' was always identified with his tuxedo and top hat. In the sound era, he worked as production supervisor and associate producer. 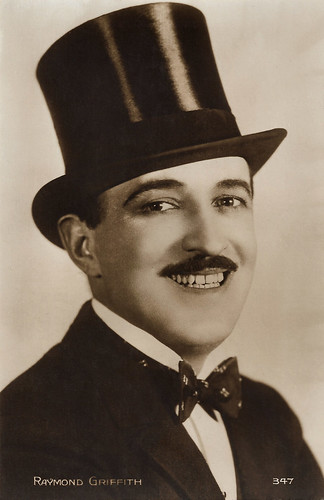 French postcard by Editions Cinémagazine, no. 347.

An acting style uniquely his own


Raymond Griffith was born in Boston, Mass. in 1895. His parents, James Henry Griffith and Mary Guichard, were both actors, as were his grandfather, Gerald Griffith, and his great grandfather, Thomas Griffith. When he was 15 months old, Raymond made his stage debut and by the age of seven he played the lead in 'Little Lord Fauntleroy.'

He lost his voice at an early age, causing him to speak for the rest of his life in a hoarse whisper. Griffith claimed that it was the result of his having to scream at the top of his lungs every night in the  stage melodrama 'The Witching Hour' as a child actor. Others have stated that a respiratory diphtheria had permanently damaged his vocal chords.

Afterwards, he worked in a circus, was a dancer and dance teacher, toured Europe with French pantomime players and joined the US Navy for a while, before settling in California in 1914.

In 1915, he made his film debut at the L-KO Kompany, where a played in countless comedies. In 1916, he switched to Mack Sennett's Keystone in 1916, where he remained for years. At first Griffith worked mostly as gagman and scriptwriter. After interludes at Fox and Triangle, Griffith returned to Keystone in 1918.

From 1918 he worked mainly in features. In 1921 he joined director Marshall Neilan's unit. While with Neilan, he returned to acting and, it is assumed, continued writing scenarios. In the fall of 1922, he left Neilan and got a contract at Goldwyn Pictures, which eventually would merge into MGM.

Griffith's first film for his new studio was the mystery-melodrama Red Lights (Clarence G. Badger, 1923) with Marie Prevost. He appeared in Tod Browning's The Day of Faith (1923) with Eleanor Boardman and Tyrone Power, Sr.

It was here that his career as star comedian began. In his 1991 article  'Another Griffith', Davide Turconi notes in Griffithiana: "As for Griffith's Goldwyn period, however, it is worth mentioning that he introduced certain changes to the films in which he appeared between 1922 and 1923 that clearly reflect his earlier experience with Lehrman (L-KO) and Sennett."

Jon Hopwood adds at IMDb: "During his Goldwyn period, Griffith created an acting style uniquely his own that was a hybrid of the comedic and the dramatic. In his Goldwyn films he played detectives & journalists and characters not entirely on the side of the law. His characters were not explicitly comic, but the characterisations were infused with Griffith's panache, spiced with comic business that occasionally crossed the threshold into slapstick. The style often tipped the scenarios over into farce. "

At MGM, he also played in dark tales such as The White Tiger (Tod Browning, 1923) starring Priscilla Dean, in which he is searching for the murderer of his father (Wallace Beery). 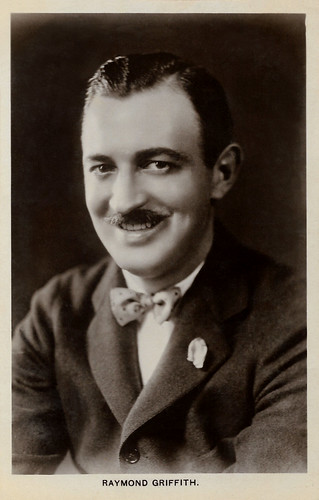 British postcard in the Picturegoer Series, London, no. 327. 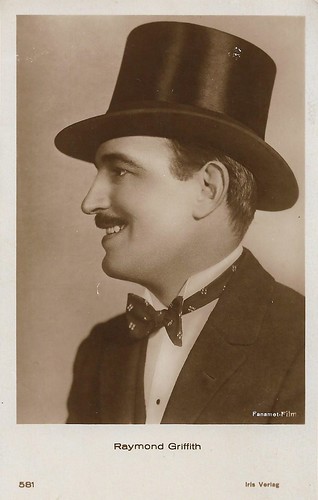 The work of an inventive, unaggressive, amiably iconoclastic intelligence


In late 1923 or early 1924, Raymond Griffith signed a contract with Famous Players, where he made five pictures. The first was Changing Husbands (1924) directed by Cecil B. DeMille and co-starring Leatrice Joy.

Then he moved to Paramount where some of his best films were made, first of all Paths to Paradise (Clarence Badger, 1925) with Betty Compson, a caper film that is in all circulating prints missing its final reel. It was highly praised when it came out and a critic predicted that he would become Chaplin's top rival.

Even more famous is Hands Up! (1926), a Civil War comedy feature directed by Clarence G. Badger, and co-starring Mack Swain, which was entered into the National Film Registry in 2005. Sennett plays Jack, a spy for the Confederate States of America, who tries to capture a Union shipment of gold. Obstacles along the way include a pair of sisters, hostile Indians, and a firing squad. In his 1975 book 'The Silent Clowns', Walter Kerr wrote about it: "Hands Up! contains some work that is daring - for its period, certainly - and some that is masterfully delicate, the work of an inventive, unaggressive, amiably iconoclastic intelligence."

His next film, Wet Paint (Arthur Rosson, 1926) with Helene Costello and Bryant Washburn, brought him more high praise from the critics. Griffith made one more film in 1926 and two in 1927. Although 1926 brought him kudos from the critics, neither of the 1927 films received positive reviews, and, according to at least one fan magazine of the time, Griffith and Famous Players brought his contract to an end by "mutual consent."

Like many silent comedians, Griffith had a traditional costume; his was a top hat, white tie and tails, often augmented by a cape and/or walking stick. Unfortunately, many of Griffith's starring feature films have long since been lost, or have not been re-released.

The coming of sound ended Griffith's acting career, but he did have one memorable film role before retiring from the screen, In the classic anti-war film All Quiet on the Western Front (Lewis Milestone, 1930) he plays the French soldier who takes cover in the same shell crater as German soldier Lew Ayres, who stabs him with a bayonet and is then forced to spend the night watching him die.

It was a small but pivotal role. Jon C. Hopwood: " Because of his wounds, the French soldier cannot speak above a whisper, which enabled Griffith to play the role. The scene, in which the French soldier slowly dies, is made harrowing and haunting by Griffith's performance."

Griffith then retired from acting, but not from the cinema. He continued to work at Twentieth Century Fox as a production supervisor and associate producer.

In 1957, Raymond Griffith choked to death at the Masquers Club in Los Angeles, California, aged 62. His asphyxia was due to partially masticated food. Griffith was married to stage and film actress Bertha Mann between 1928 and his death. They had one adopted daughter and two children of their own (one was stillborn). 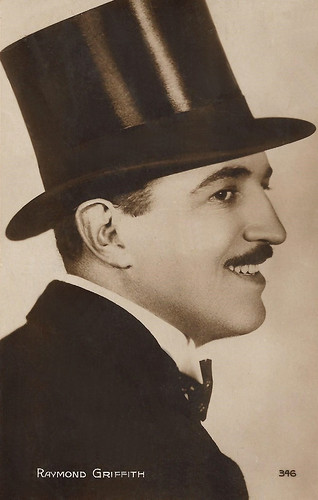 French postcard by Editions Cinémagazine, no. 346.