American singer and cowboy actor Roy Rogers (1911–1998) was one of the most popular Western stars of his era. Known as the 'King of the Cowboys', he appeared in over 100 films, mostly for Republic Pictures. 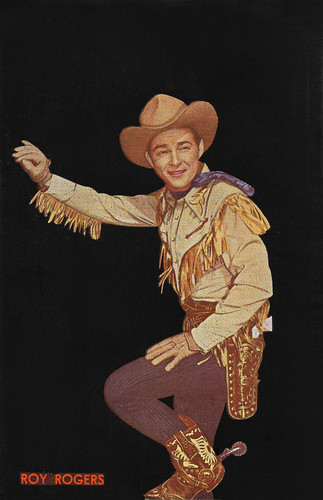 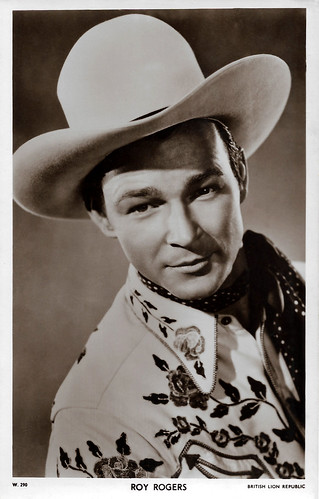 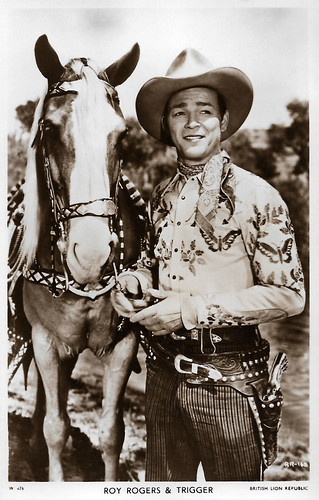 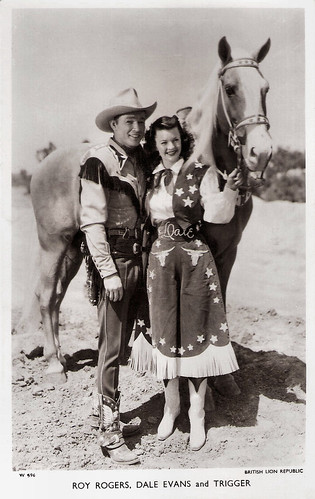 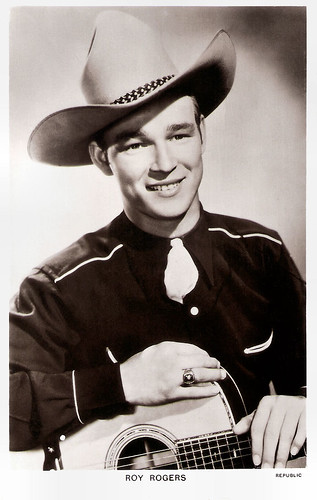 A matinee idol and an American legend


Roy Rogers was born Leonard Slye in 1911 in Cincinnati, Ohio, USA. He was the son of  Mattie (née Womack) and Andrew Slye.

Later, living on a farm near Lucasville with no radio, the family made their own entertainment. On Saturday nights, they often invited neighbours over for square dances, during which Len would sing, play mandolin, and call the square dances. He also learned to yodel during this time, and his mother and he would use different yodels to communicate with each other across distances on the farm.

By 1929, after his older sister Mary and her husband had moved to Lawndale, California, Len and his father quit their factory jobs, packed up their 1923 Dodge, and drove the family to California to visit Mary. He moved definitively to California in 1930, aged 18. He played in such musical groups as The Hollywood Hillbillies, Rocky Mountaineers, Texas Outlaws, and his own group, the International Cowboys.

While in that group he was known as Leonard Slye, then as Dick Weston. Their songs included 'Cool Water' and 'Tumbling Tumbleweeds'. They first appeared in the western Rhythm on the Range (Norman Taurog, 1936), starring Bing Crosby, Frances Farmer and Martha Raye.

From his first film appearance, he appeared steadily in Westerns, including a bit role as a bandit opposite Gene Autry in The Old Coral (Joseph Kane, 1936). In 1937 he went solo from Sons Of The Pioneers.

In 1938, he played a large supporting role as a singing cowboy in another Gene Autry Western, The Old Barn Dance (Joseph Kane, 1938). That same year, Autry entered the United States Army Air Force. Republic immediately rechristened Slye 'Roy Rogers', and he was assigned the lead in Under Western Stars (Joseph Kane, 1938) with Smiley Burnette and Carol Hughes. In the film, Roy is elected to Congress to bring the misery of the 'dustbowl' of the 1930s to the attention of Washington politicians.

Rogers became a matinee idol and an American legend. In addition to his own films, Rogers played a supporting role in the John Wayne classic Dark Command (Raoul Walsh, 1940). In the Motion Picture Herald Top Ten Money-Making Western Stars poll, Rogers was listed for 15 consecutive years from 1939 to 1954, holding first place from 1943 to 1954. 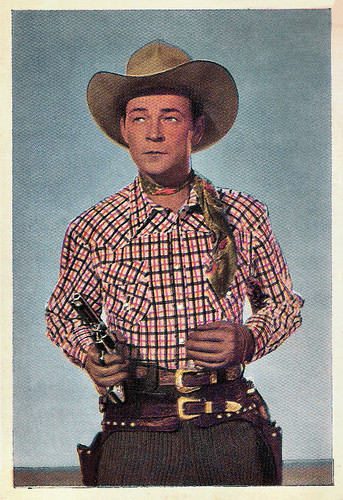 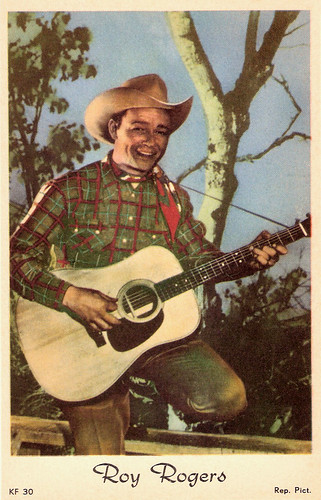 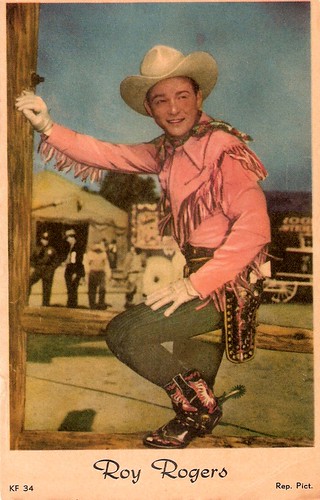 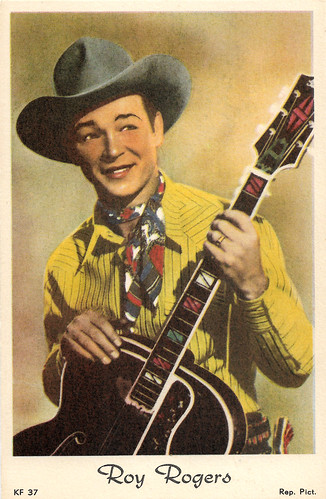 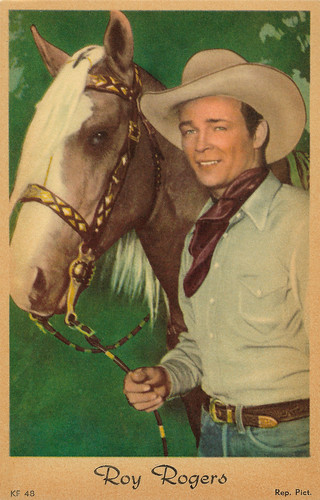 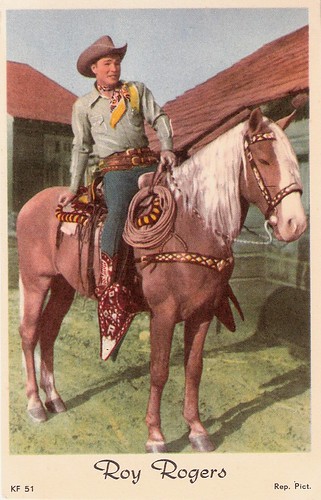 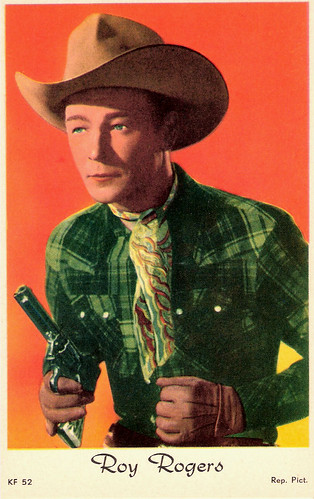 His show ran on radio for nine years before moving to television from 1951 through 1957. His productions usually featured a sidekick, often Pat Brady, Andy Devine, or George 'Gabby' Hayes.

In 1965 his horse Trigger died at age 33. Roy got his horse in 1938 and rode him in every one of his films and TV shows after that. Trigger had appeared in one earlier film, ridden by Olivia de Havilland in The Adventures of Robin Hood (Michael Curtiz, 1938).

In his later years, Rogers lent his name to the Roy Rogers Restaurants franchised chain. His final film part was as an old time working cowboy who's not settled down in Mackintosh and T.J. (Marvin J. Chomsky, 1975). He was elected to the Country Music Hall of Fame in 1980 as a member of the Sons of the Pioneers and elected again in 1988 as Roy Rogers.

Roy Rogers died in 1998 in Apple Valley, California, USA, of congestive heart failure. He was married three times. He married his first wife Lucile Ascolese in 1933 and they divorced in 1936.

That year he married Grace Arline Wilkins. While performing in Roswell, New Mexico, a caller to a radio station ( Grace Arline Wilkins) promised Rogers that she would bake him a pie if he sang 'The Swiss Yodel'. Romance blossomed, and the couple married in Roswell in 1936. They had three children, but she died in 1946, a few days after giving birth to their son, Roy Rogers Jr. (Dusty). She had complications from the cesarean - a blood clot formed, travelled to her brain and killed her.

A year later he married Dale Evans, with whom he had six children. They remained together till his death. There was a Roy Rogers & Dale Evans Museum at Branson, Missouri, but it closed in 2011. All the memorabilia were sold at an auction in April and May of 2011 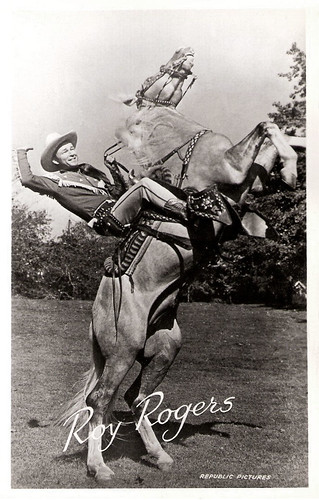 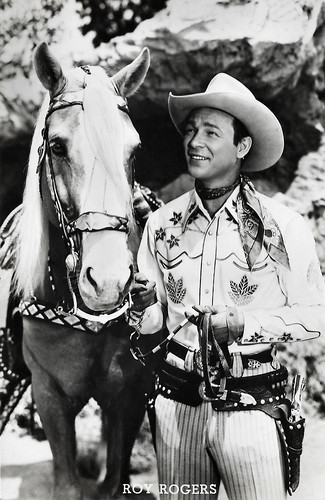 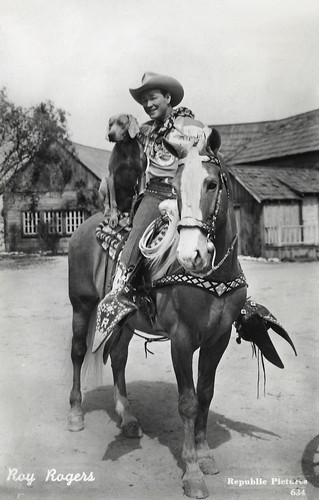 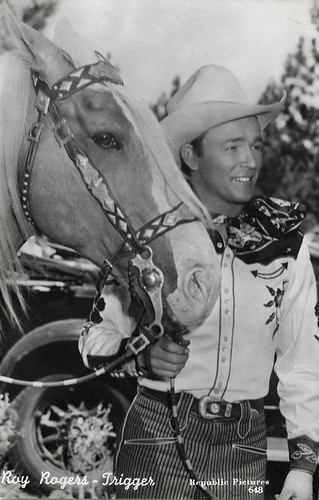 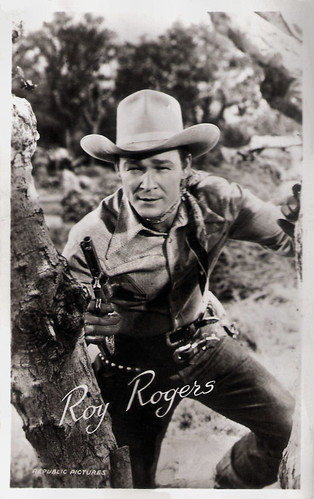 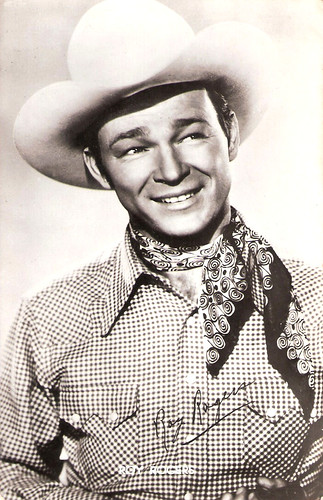 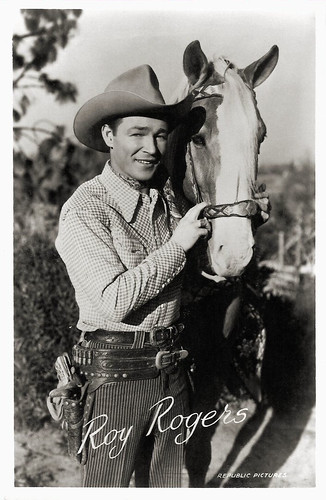 Thanks for an informative post and great postcards on Roy Rogers!