American actor Johnny Depp is one of the most versatile actors in today's Hollywood. He made his film debut as one of Freddy Krueger's victims in A Nightmare on Elm Street (1984). With his dark, intense eyes and highly defined cheekbones, he shot to fame as a teen idol in the TV series 21 Jump Street (1987). He is now best known for his many wonderful collaborations with director Tim Burton, and for his flamboyant pirate Jack Sparrow in the Pirates of Carribean franchise. He likes to play freakishly eccentric outcasts whose oddities are misunderstood by society. Depp has been nominated for three Oscars and has won the Golden Globe and Screen Actors Guild Awards for Best Actor. 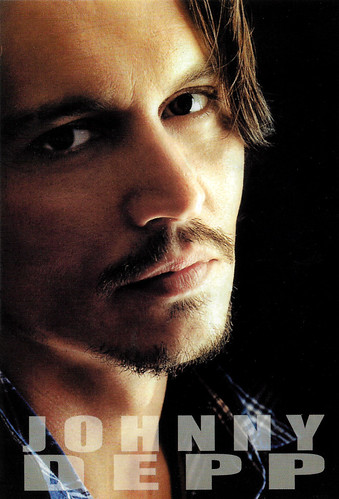 British postcard by Music Factory, no. 087. 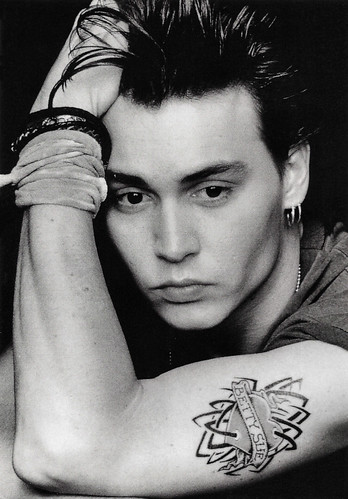 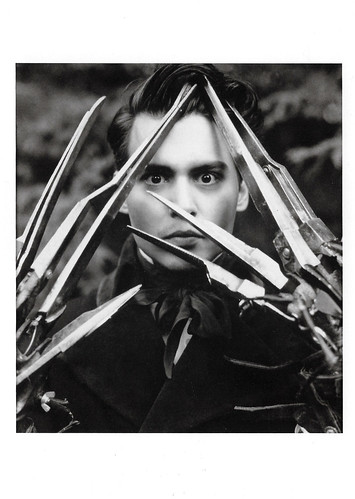 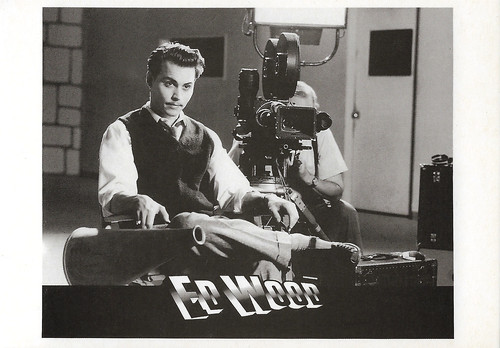 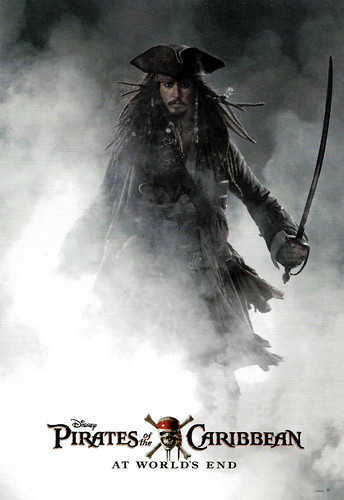 Depp was raised in Florida. He dropped out of school when he was 16 (or 15 - the sources differ), after his parents divorced. The brooding teenager fronted a series of music-garage bands, including the punk rock/New Wave band The Kids, which opened for Iggy Pop, Duran Duran, and The B-52's.

When he married Lori Anne Allison (Lori A. Depp), he took up the job of being a ballpoint-pen salesman to support himself and his wife during slack times in the music business. When he visited Los Angeles with his wife, he met actor Nicolas Cage, who advised him to turn to acting.

This culminated in Depp's film debut in the low-budget horror film, A Nightmare on Elm Street (Wes Craven, 1984), where he played a teenager who falls prey to dream-stalking demon Freddy Krueger.

In 1987 he shot to stardom when he replaced Jeff Yagher as Officer Tom Hanson, who goes on an undercover operation by posing as a student in crime-ridden Los Angeles-area high schools in the TV series 21 Jump Street (1987).

After numerous roles in teen-oriented films, Depp spoofed the genre as 1950s teen rebel 'Cry-Baby' Wade Walker in John Waters' tongue-in-cheek Cry-Baby (1990). The film received positive reviews from critics, but did not achieve high audience numbers in its initial release. It has subsequently become a cult classic and spawned a Broadway musical of the same name which was nominated for four Tony Awards. 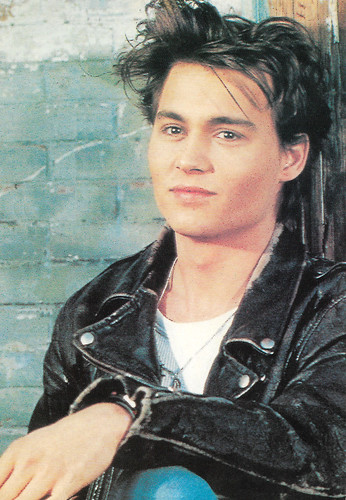 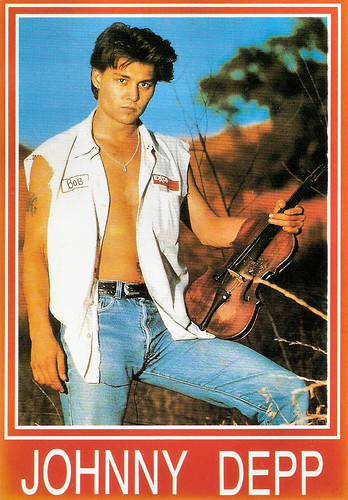 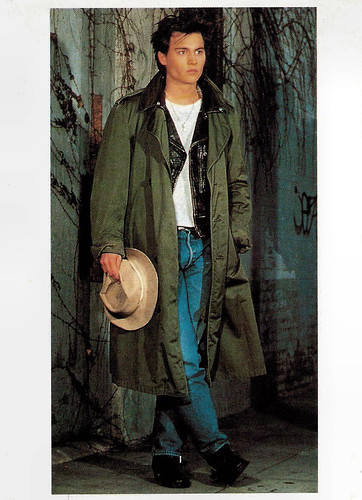 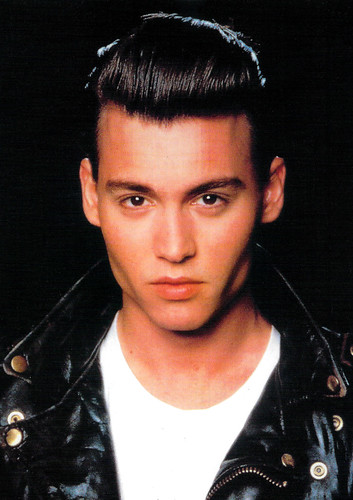 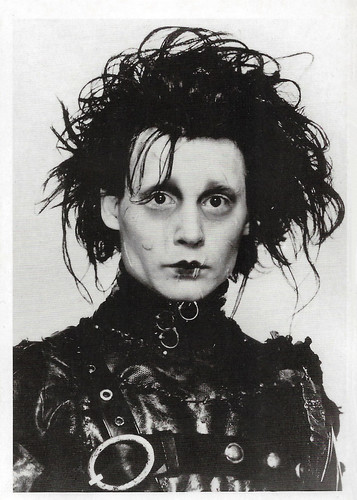 He continued to gain critical acclaim and increasing popularity by appearing in such features as Lasse Hallström's What's Eating Gilbert Grape (1993). He starred alongside Leonardo DiCaprio and Juliette Lewis in this drama about a dysfunctional family.

He rejoined with Burton in the lead role of Ed Wood (Tim Burton, 1994), a biographical film about one of history's most inept film directors. Then he played a newly-orphaned accountant in the surrealist Western Dead Man (Jim Jarmusch, 1995), and an undercover FBI agent in the fact-based crime drama Donnie Brasco (Mike Newell, 1997), opposite Al Pacino.

With Chuck E. Weiss, Depp turned the Central Nightclub in Los Angeles, into the famous Viper Room at 8852 Sunset Blvd. The building was once owned by infamous gangster Bugsy Siegel.

It's also the place where River Phoenix passed away on 31 October 1993. Depp closed down the Viper Room for two weeks after Phoenix's death and he also closed it on every 31 October until 2004.

That year, he ended his ownership of the Viper room when he signed it over to Amanda Fox, the daughter of his missing partner in the club, Anthony Fox. Depp also once co-owned a restaurant/club in a former cinema in Paris called Man Ray (named after the avant-garde artist), with Sean Penn, John Malkovich and British musician Mick Hucknall. 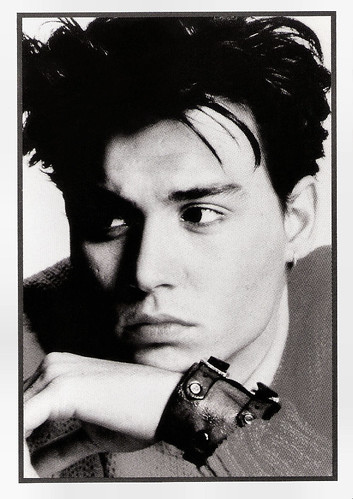 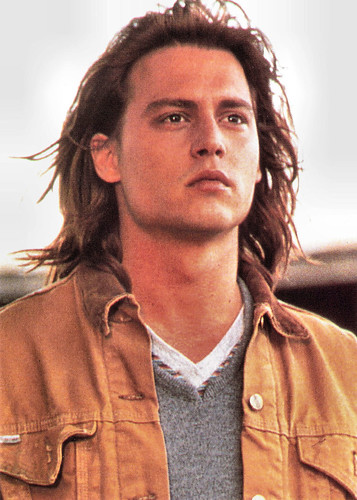 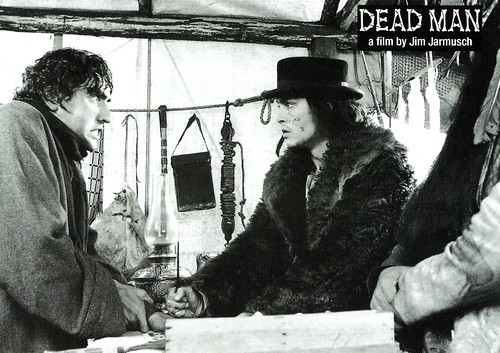 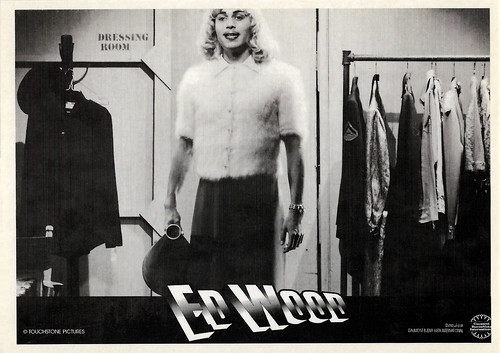 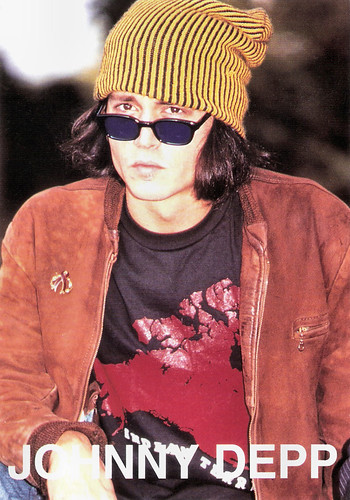 
Johnny Depp has played many different and often bigger-than-life characters in his career. He played a fact-based one, Insp. Fred Abberline in From Hell (Albert Hughes, Allen Hughes, 2001).

He stole the show in the finale to Robert Rodriguez's Mariachi trilogy, Once Upon a Time in Mexico (2003), opposite Antonio Banderas.

In that same year he starred in the marvellous family blockbuster Pirates of the Caribbean: The Curse of the Black Pearl (Gore Verbinski, 2003), playing a character that only the likes of Depp could pull off: the charming, conniving and roguish Capt. Jack Sparrow. He based Sparrow on rock legend Keith Richards and the Looney Tunes character, Pepe Le Pew. The film's enormous success included an Oscar nomination for Depp.

Depp was again nominated for the Best Actor Academy Award for his performance as kind-hearted Scottish novelist James Matthew Barrie, who penned the children's classic 'Peter Pan', in Finding Neverland (Marc Forster, 2004), with Kate Winslet. He appeared as the notorious second Earl of Rochester in the British film The Libertine (Lawrence Dunmore, 2004) opposite John Malkovich. 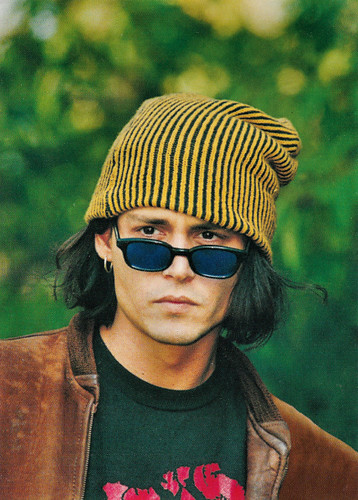 British postcard in the Film & Music Personalities series by Pyramid, Leicester, no. PC 2005. 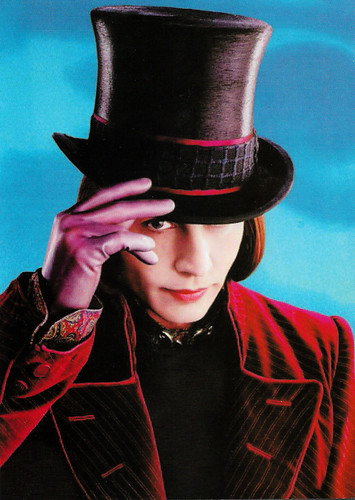 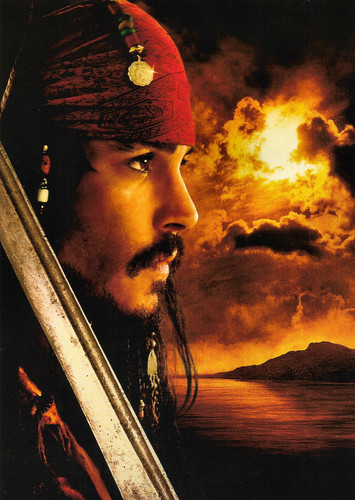 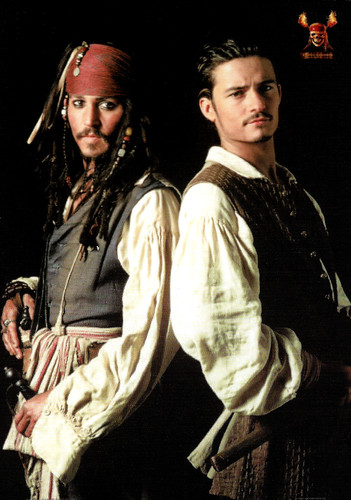 French postcard by Sonis, no. C. 1698. Photo: Disney. Johnny Depp and Orlando Bloom in Pirates of the Caribbean: At World's End (Gore Verbinski, 2007). 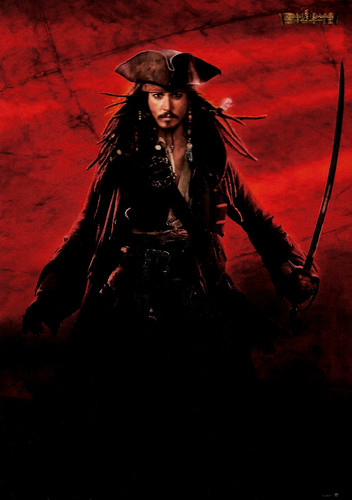 
Off-screen, Johnny Depp has dated several female celebrities, and has been engaged to Sherilyn Fenn, Jennifer Grey, Winona Ryder and Kate Moss. He was married to Lori Anne Allison in 1983, but divorced her in 1985.

Depp has two children with French singer/actress Vanessa Paradis: Lily-Rose Melody (1999) and Jack (2002). He married actress/producer Amber Heard in 2015. Heard filed for divorce from Johnny Depp in May, 2016. She was granted a temporary domestic violence restraining order against Depp in relation to a physical altercation between the couple, which resulted in Heard filing for divorce in the first place. Heard was granted $7 million as part of the former couple's divorce, which was finalised in 2017.

Depp has struggled with alcoholism and addiction for much of his life. Depp has stated that he began smoking at age 12 and began using alcohol and drugs shortly thereafter. In July 2018, Depp was sued for allegedly punching a crew member twice in the ribs during a foul-mouthed tirade. Court documents stated that the actor "reeked of alcohol" and took drugs on set.

According to IMDb, Johnny Depp resides in France, Los Angeles, and on an island he owns in the Bahamas. He divides his time in France between Meudon, a suburb of Paris and a villa in Plan-de-la-Tour, an hour outside of St Tropez in Southern France. He also purchased Bela Lugosi's Los Angeles home.

Depp is intensely protective of his private life. Inside the Actors Studio (1994) is one of the few televised interviews he's granted. Hal Erickson at AllMovie: "Despite this massive success (or maybe as a result), Depp's career suffered a downswing after a string of critical and commercial flops. Films like The Tourist (opposite Angelina Jolie), Dark Shadows (a rare misstep with Tim Burton) and The Lone Ranger failed to connect with audiences and critics alike and left many to wonder when Depp's career would recover."

It did. In recent years, Depp reprised the role of the Mad Hatter in Alice Through the Looking Glass (James Bobin, 2016), reprised his role as Captain Jack Sparrow in Pirates of the Caribbean: Dead Men Tell No Tales (Joachim Rønning, Espen Sandberg, 2017), and he was seen in the blockbuster Fantastic Beasts: The Crimes of Grindelwald (David Yates, 2018), written by J. K. Rowling and starring Eddie Redmayne. Depp is set to return as Gellert Grindelwald in the third Fantastic Beasts film, which is scheduled for release in November 2020. 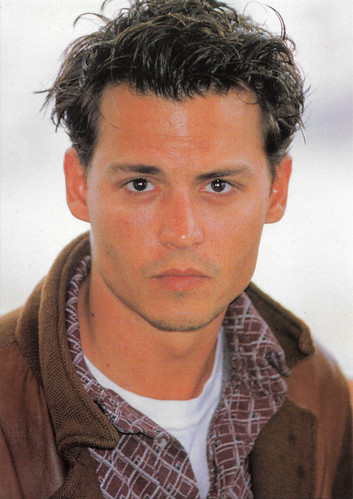 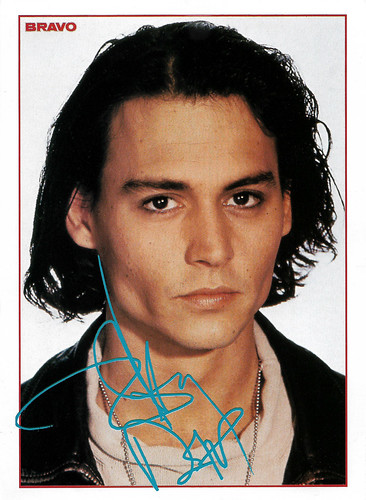 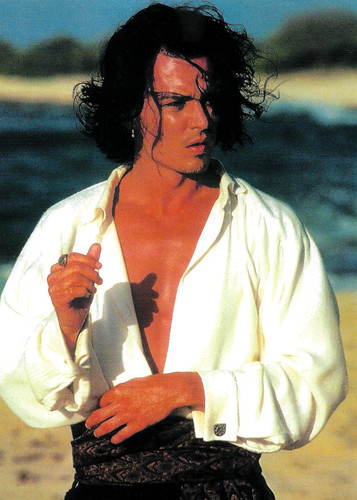 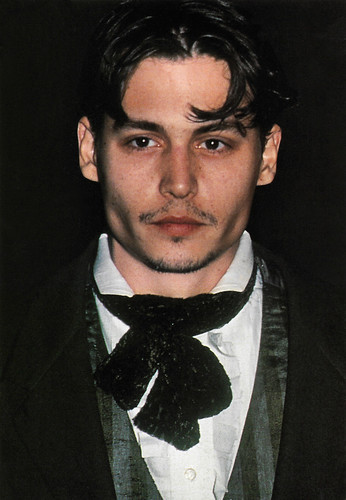 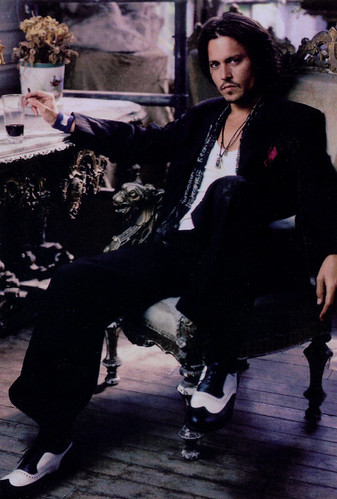 British postcard by Music Factory, no. 086. 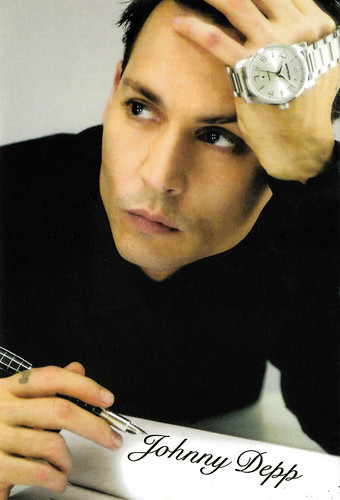 British postcard by Music Factory, no. 241.