Austrian born actress and writer Elissa Landi (1904–1948) was (falsely) rumoured to be a descendant of Emperor Franz Joseph of Austria. During the 1920s, she appeared in British, French, and German films before travelling to the United States. In Hollywood, she became a popular star of the 1930s. 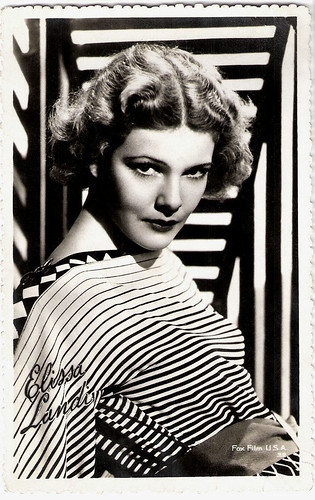 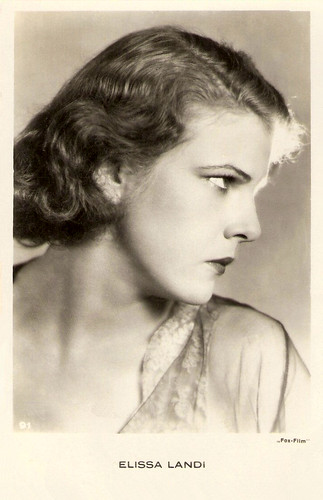 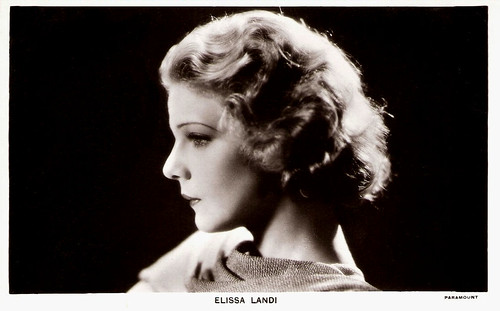 British postcard in the Picturegoer Series, London, no. 533b. Photo: Paramount. 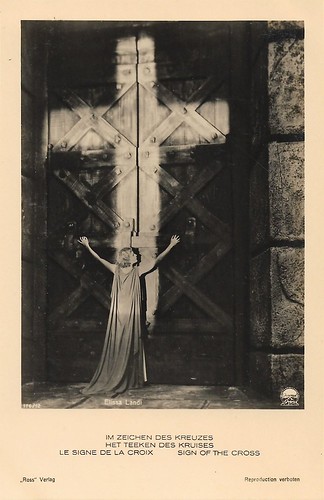 German postcard by Ross Verlag, no. 176/12. Photo: Paramount. Elissa Landi in the American epic The Sign of the Cross (Cecil B. DeMille, 1932), based on the original 1895 play by Wilson Barrett. 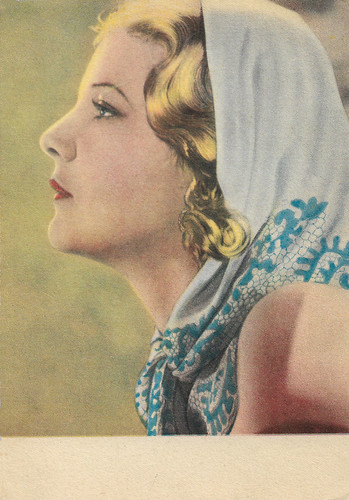 
According to several sources, Elissa Landi was born as Elisabeth Marie Christine Kühnelt in Venice, Italy, in 1904. She was the daughter of an Austrian military officer and the stepdaughter of an Italian nobleman and she was a descendant of Elizabeth of Bavaria, wife of the Emperor Franz Josef of Austria and better known as Sissi, according to her mother in a book which she published in 1914.

Elissa was raised in Austria and later she was privately educated in England and Canada. Her first ambition was to be a writer, and she wrote her first novel at the age of twenty. She took up the stage merely as a means to an end. She had always wanted to be a novelist and playwright, but she found the technique of the theatre a little difficult, so in order to overcome this joined a repertory company.

She had her breakthrough with the 1924 London stage production 'The Storm'. The play lasted for five months and she received rave reviews for her performances. This led to meaty leads in 'Lavender Ladies' (1924) and other plays. Film producers took notice of the photogenic beauty and Elissa starred in eight European films over the next two years.

Her first film was the British production London (Herbert Wilcox, 1926), starring Dorothy Gish. Other films were the working-class love story Underground (Anthony Asquith, 1928) and the Swedish production Synd/Sin (Gustaf Molander, 1928) opposite Gina Manès. Her career didn't impress critics, though, until she played Anthea Dane in The Price of Things (Elinor Glyn, 1930). 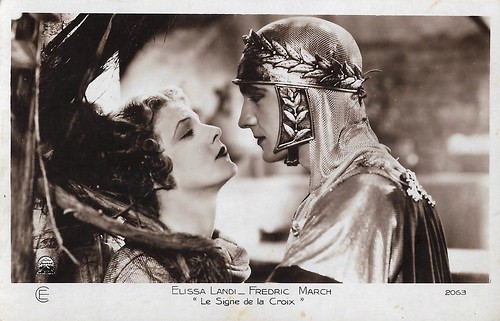 French postcard by Editions Cinémagazine, no. 2063. Photo: Paramount. Fredric March and Elissa Landi in the American epic film The Sign of the Cross (Cecil B. DeMille, 1932). 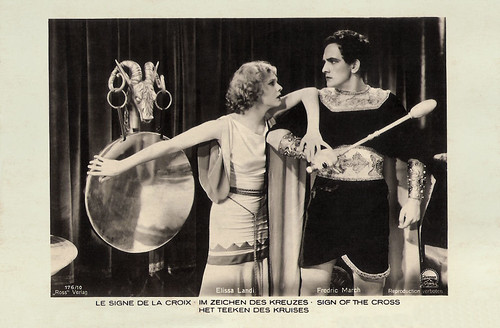 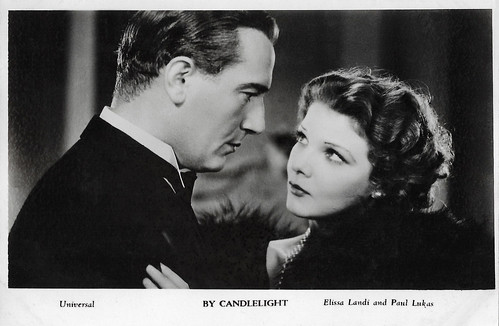 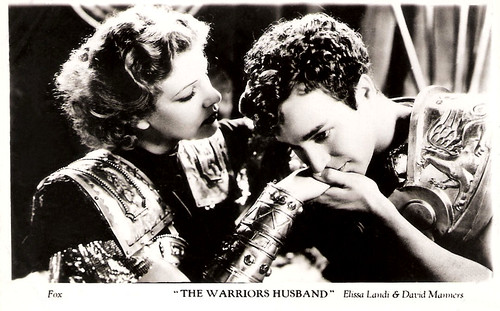 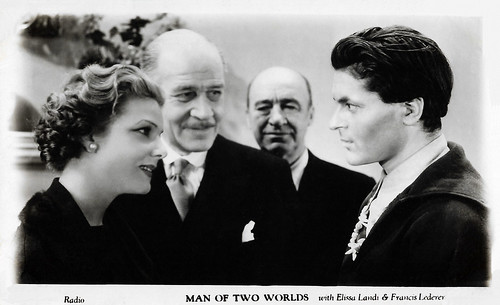 Headway in the USA


Elissa Landi felt that she would make more headway in the USA, so in 1931 she travelled to New York to star in a Broadway production of 'A Farewell to Arms', written by Ernest Hemingway. Although the play flopped, Hollywood sat up and took notice of the young star. She was signed to a contract by Fox Film Corporation, and she soon appeared in Body and Soul (Alfred Santell, 1931) opposite Charles Farrell, and in Wicked (Alan Dwan, 1931), opposite Victor McLaglen.

Next, she played the heroine in Cecil B. De Mille's biblical epic The Sign of the Cross (1932). Elissa's ethereal, virtuous performance as the early-Christian heroine was overshadowed by Claudette Colbert who played the flashier role of the temptress Poppea. Completed in less than eight weeks, the film was a smash hit. Elissa scored again in the historical satire The Warrior's Husband (Walter Lang, 1933), about the intrigues and intricacies of the old Roman Empire.

Charming was her comedy By Candlelight (James Whale, 1933) about a butler (Paul Lukas) who pretends to be a Lord to seduce a great lady (Landi), who is actually a maid. Hal Erickson writes at AllMovie: "Based on a play by Siegfried Geyer, By Candlelight is chock full of delightfully double-entendre pre-Code dialogue and dextrous directorial touches."

In 1934, Landi co-starred with Robert Donat in the box office hit The Count of Monte Cristo (Rowland V. Lee, 1934). The next year saw her in an odd bit of casting as an Opera prima donna in Enter Madame (Elliott Nugent, 1935). The film follows the turbulent relationship between the Opera singer and a wealthy fan (Cary Grant) as her career frequently interferes with the quality of their off-again/on-again marriage.

Then Landi's contract with Fox was abruptly cancelled in 1936 as a result of her refusal to accept a particular role. MGM signed her to a contract and after a couple of romantic dramas, she played the cousin of Myrna Loy in the very popular After the Thin Man (W.S. Van Dyke, 1936), the second film in the Thin Man series.

Her screen career came to an end in 1937. She spent her last acting years on Broadway save for an unexpected return before the cameras in the low-budget war film Corregidor (William Nigh, 1943) for Poverty Row Producers Releasing Corporation (PRC). She became a naturalised US citizen in 1943, and dedicated herself to writing, producing six novels and a series of poems. After her debut at the age of twenty, she had continued writing novels at the height of her movie fame.

In 1948, Elissa Landi died of cancer in Kingston, New York, only 43 years old, and was buried at Oak Hill Cemetery in Newburyport, Massachusetts. She left behind her second husband, Curtiss Thomas, and their four-year-old daughter, Carolyn. Her first marriage was to John Cecil Lawrence (1928-1936; divorce). Elissa Landi has a star on the Hollywood Walk of Fame for her contributions to Motion Pictures, at 1611 Vine Street. 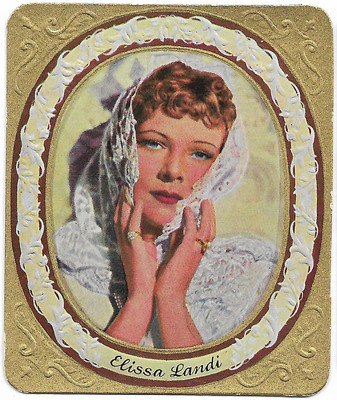 German collectors card in the 'Moderne Schönheitsgalerie' by Ross Verlag for Edelzigarette Kurmark, no 292 (of 300). Photo: Paramount. 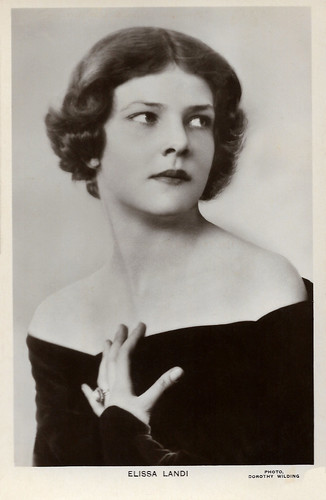 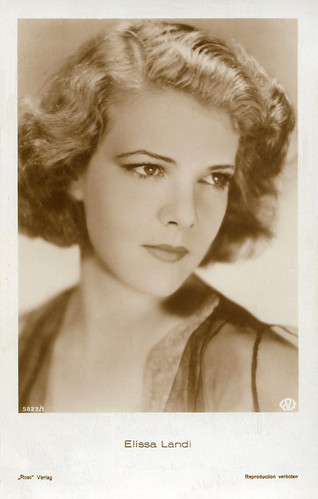 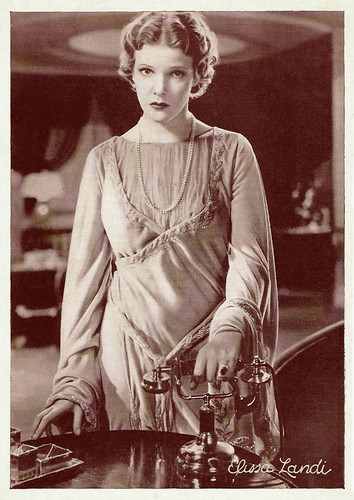 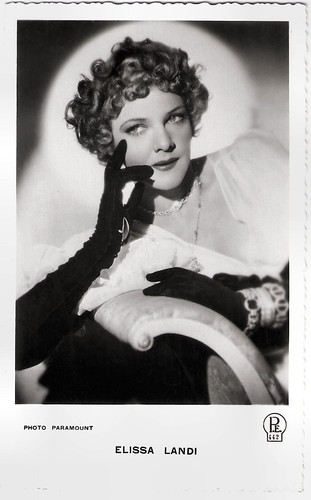 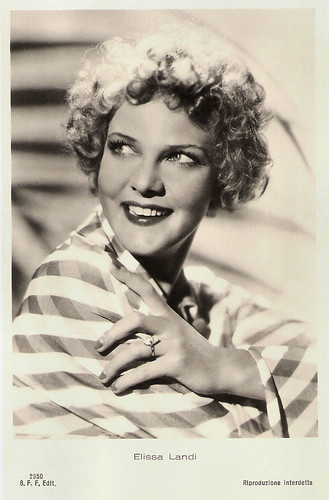 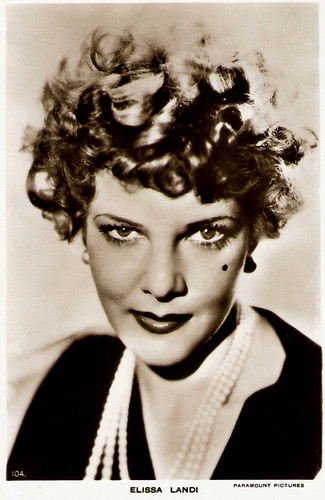 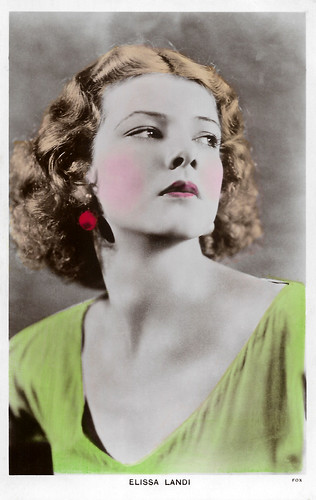 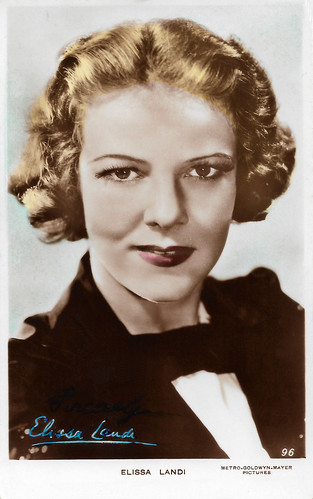 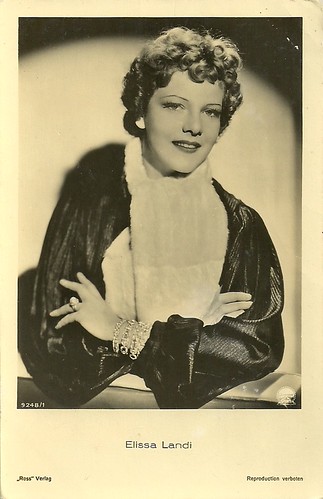