Brunette Benita Hume (1907-1967) was an English theatre and film actress. She appeared in 44 films between 1925 and 1955, from the silent film era to sound film. She had a prolific even if a short-lived career as the leading lady in Hollywood cinema. 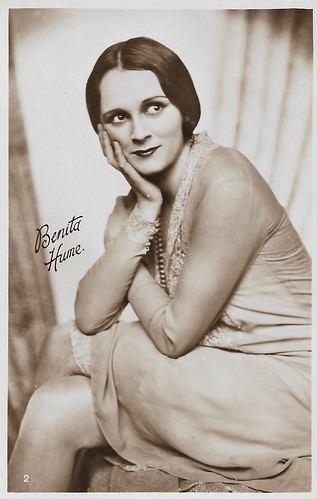 British Real Photograph postcard by Sarony, no. 2 of a fifth series of 25 Cinema Stars, issued with Sarony Cigarettes. 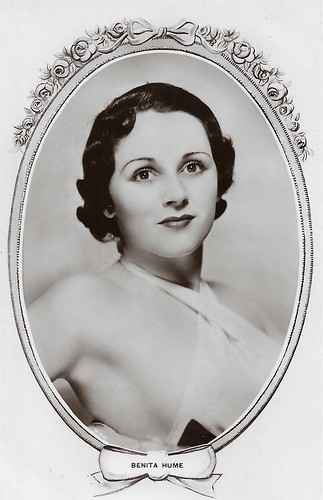 British postcard in the Cameo Series, London, no. K.32. 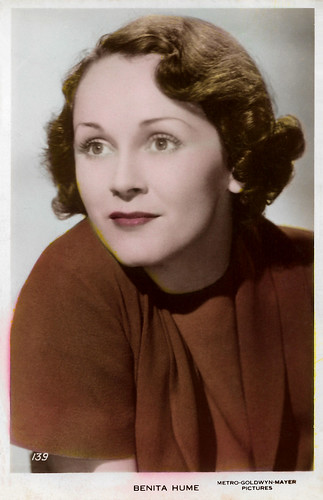 Overheated leaders of the US and United Europe


Benita Hume was born as Benita Humm in Beckenham, London, England, in 1907. She was the daughter of Henry Josiah Humm and Jane Humm née Duff.

Hume started out as a pianist but pursued acting because she wanted "excitement", according to IMDb. She did the RADA theatre academy and the seventeen-year-old started to act on stage in 1924.

From 1925 she played small parts in British cinema e.g. in Alfred Hitchcock's Easy Virtue (1927), and she had her first major part in the spy drama Second to None (Jack Raymond, 1927).

She was one of the Sanger sisters in The Constant Nymph (Adrian Brunel, 1928), starring Ivor Novello and Mabel Poulton, and had the female lead in the period piece Balaclava (Maurice Elvey, Milton Rosmer, 1928), set during the Crimean War. Elvey shot the silent version, but Rosmer reshot much to turn it into a talkie.

In A South Sea Bubble (T. Hayes Hunter, 1928), Hume was paired again with Ivor Novello, but now as the leading lady. Again Brunel directed her in A Light Woman (Adrian Brunel 1928), in which she was the star, while she was the title character in The Lady of the Lake (James A. FitzPatrick, 1928).

In the Science-Fiction film High Treason (Maurice Elvey, 1929), shot both as silent and sound version, pacifist women led by Hume's character and her father unite to prevent overheated leaders of the US and United Europe (it is SF!) and war-mongering financiers and agitators from engineering a second world war.

Hume next played in two more crime films: The Clue of the New Pin (Athur Maude, 1929) and the German-British co-production Der Würger/The Wrecker (Géza von Bolváry, 1929), based on an Edgar Wallace novel. 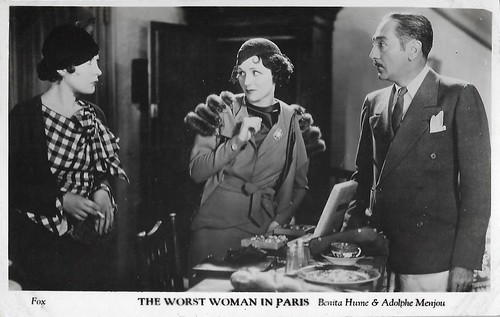 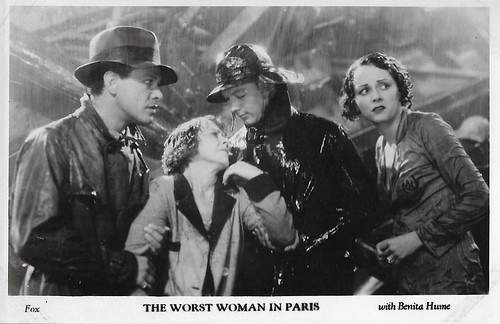 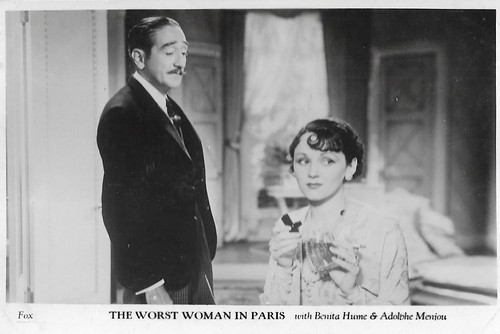 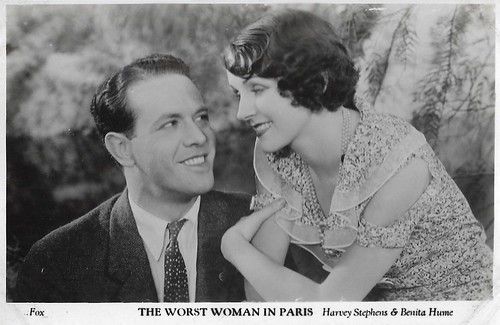 
In 1930, Benita Hume won the female leading role in Ivor Novello's hit play 'Symphony in Two Flats'. She accompanied Novello when he took the play to the U.S.A. and it became her successful Broadway debut. In the same year, she acted in the UK film version of the play, Symphony in Two Flats (Gareth Gundrey, 1930).

She continued to act in various British crime films and dramas by Maurice Elvey and others. In 1931 she would divorce her first husband, Eric Otto Siepmann, whom she had married in 1926 when she was 19.

After one Warner production shot at their UK studios in 1932, Hume also started a prolific even if short-lived career as the leading lady in Hollywood cinema, though she never became a huge star. IMDb: "she played a series of well-coiffed English ladies in RKO and MGM films". In fact, Hume acted in 11 American films between 1932 and 1933. After the impostors' story Diamond Cut Diamond (Maurice Elvey, Fred Niblo, 1932), with Adolphe Menjou, she acted in such films as the press drama Clear All Wires! (George Hill, 1933) with Lee Tracy, and The Worst Woman in Paris? (Monta Bell, 1933), which was her last American film.

From the second half of 1934, Hume acted in British films again. For some films, she was occasionally called to the US again, e.g. for Tarzan Escapes (Richard Thorpe, 1936) starring Johnny Weissmuller, though not as the female star of the films anymore.

In 1938 Benita Hume quit film acting altogether, though she continued with radio and TV work. In 1938 she married British actor Ronald Colman, with whom she appeared on the Jack Benny radio show. They were supposed to be Jack's next-door neighbours, and were usually referred to as "Ronnie and Benita". Their episodes usually dealt with either Jack embarrassing the couple in public or trying to weasel his way into a Colman party at their house.

Hume and Colman also starred in the radio show 'The Halls of Ivy' (1950-1952) and the TV version The Halls of Ivy (1954-1955). The couple co-owned a resort in California and had one daughter, Juliet (1944). After Colman's death in 1958, Hume remarried with British actor George Sanders in 1959. They remained together till her death. Benita Hume died in 1967 at Egerton, Kent, UK, due to bone cancer. She was 61. Hume was cremated and her ashes were scattered at the Charing Crematorium, aka Kent County Crematorium. 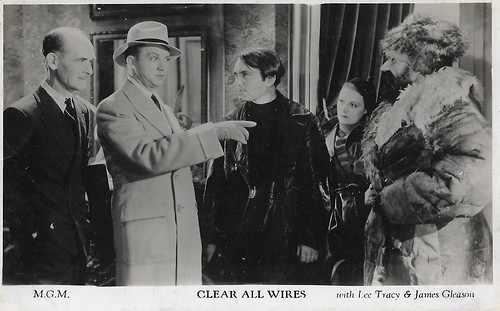 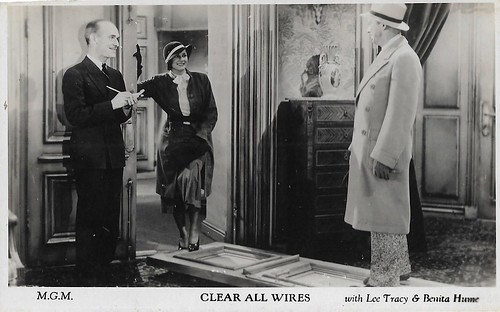 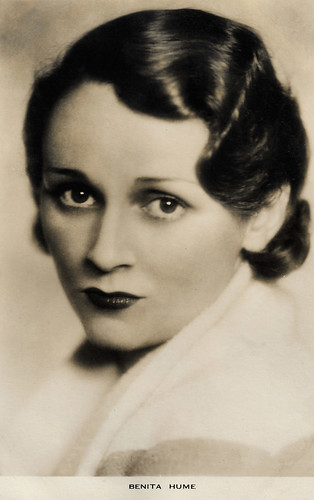 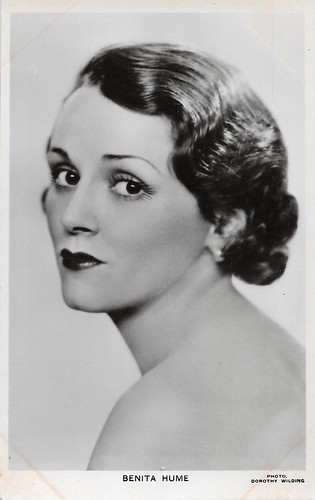 British postcard in the Picturegoer Series, London, no. 447a. Photo: Dorothy Wilding.