The Ten Commandments (1923) is an American silent religious epic produced and directed by Cecil B. DeMille. Written by Jeanie MacPherson, the film is divided into two parts: a prologue recreating the biblical story of the Exodus and a modern story concerning two brothers and their respective views of the Ten Commandments. Lauded for its immense and stupendous scenes, use of Technicolor process, and the parting of the Red Sea sequence, the expensive film proved to be a box-office hit upon release. It is the first in DeMille's biblical trilogy, followed by The King of Kings (1927) and The Sign of the Cross (1932). 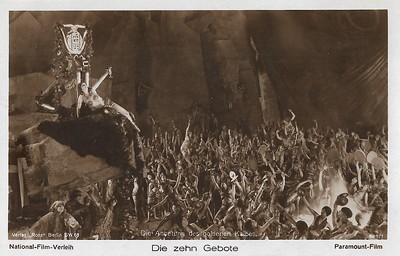 German postcard by Ross Verlag, no. 681/1. Photo: Paramount-Film / National-Verleih. Estelle Taylor is the woman who embraces the Golden Calf, in The Ten Commandments (Cecil B. DeMille, 1923). Caption: The Adoration of the Golden Calf. 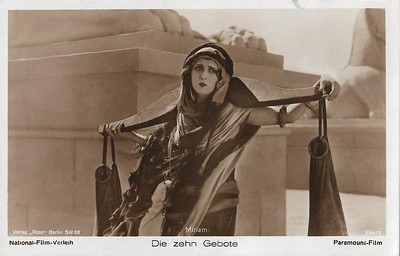 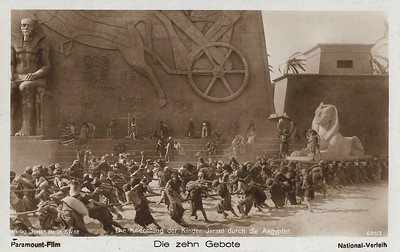 German postcard by Ross Verlag, no. 681/3. Photo: Paramount-Film / National-Verleih. Scene from The Ten Commandments (Cecil B. DeMille, 1923). Caption: The Slavery of the Children of Israel by the Egyptians.

Living by the lessons of the commandments


Cecil B. DeMille's first screen version of The Ten Commandments is only peripherally a Biblical story. The Ten Commandments (Cecil B. DeMille, 1923) is divided into two parts: the first part tells the story of Moses (Theodore Roberts) leading the Jews from Egypt to the Promised Land, his receipt of the tablets, and the worship of the golden calf. But the second part shows the efficacy of the commandments in modern life through a story set in San Francisco. Two brothers (Richard Dix and Rod LaRocque), rivals for the love of Mary, also come into conflict when John discovers Dan used shoddy materials to construct a cathedral.

In the prologue, the opening statement explains that modern society mocked and laughed at Judeo-Christian morality until it witnessed the horrors of the World War; it then beseeches the viewer to turn back to the Ten Commandments, describing them as "the fundamental principles without which mankind cannot live together. They are not laws—they are the LAW." From there, the Book of Exodus is recounted.

At the point of the Ten Commandments, Moses is seen on Mount Sinai, having witnessed the commandments given as writing in the sky, which he then manually carves into stone tablets. When he returns, he finds that the Israelites have fallen into debauchery and built a golden calf to worship. An Israelite man and woman seducing each other find, to the horror of both, that the woman has hideous sores covering her hands and is now unclean, prompting her to beg Moses to be cleansed. A furious Moses commands the power of God to destroy the calf with lightning and smashes the commandments, deeming the Israelites unworthy.

In the modern story, two brothers, John and Dan McTavish (Richard Dix and Rod LaRocque) live with their mother Martha (Edythe Chapman), a strict believer in the Biblical law. The two sons make opposite decisions; John follows his mother's teaching of the Ten Commandments and becomes a carpenter living on meager earnings, and Dan, now an avowed atheist who is convinced that the Commandments never offer him anything, vows to break every one of them and rise to the top.

As Martha evicts Dan from her house, he and John stop for a bite to eat at a lunch wagon. There, Mary (Leatrice Joy), an impoverished but beautiful young woman, steals a bite of Dan's sandwich and triggers a madcap chase after her. She takes refuge in the McTavish house, where John convinces his mother to take Mary in for the night. John also convinces Dan to set aside his grievance and stay; he also introduces Dan to Mary. Dan quickly wins Mary over with his freewheeling ways. Martha's strict observance of the Sabbath causes friction when Dan and Mary begin dancing on a Sunday, and though John tries to convince his mother to show grace, Dan and Mary decide it is time to run off together. 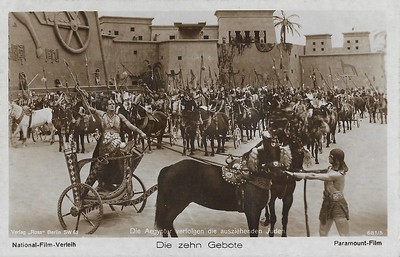 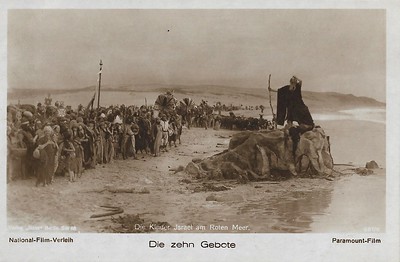 German postcard by Ross Verlag, no. 681/6. Photo: Paramount-Film / National-Verleih. Theodore Roberts as Moses (right on the rock) in The Ten Commandments (Cecil B. DeMille, 1923). Caption: The Children of Israel at the Red Sea.

The second-highest-grossing film of 1923


Three years later, Dan (Rod LaRocque) has become a corrupt contractor. He earns a contract to build a massive cathedral and decides to cut the amount of cement in the concrete to dangerously low levels, pocketing the money saved and becoming very rich. He puts John, still a bachelor, in charge of construction, hoping to use him as a conduit to provide the gifts to their mother that she refuses to accept from Dan. Dan cheats on Mary with Sally (Nita Naldi), a Eurasian adulteress. One day, Martha comes to visit him at his work site; a wall collapses on her. Fatally injured, with her last words, she tells Danny that it is her fault for being too strict teaching him to fear God when she should have taught him, love.

Now out of money, Dan learns that a muckraker tabloid has threatened to expose his operation. His business partner recommends a $25,000 bribe to stop publication, but lacking the funds, Dan instead attempts suicide — his partner stops the attempt, solely because he refuses to take the fall alone, and demands the money. He goes to Sally's brothel to take back a set of expensive pearls he gave her, but Sally refuses and reveals herself to have smuggled herself into the country from Molokai through a contraband jute shipment and is thus infected with leprosy, thus likely infecting Dan as well.

In a rage, he kills Sally and attempts to flee to Mexico on a motorboat (the S.S. Defiance), but rough weather sends him off course and he crashes into a rocky island. His dead body is seen among the wreckage. Mary, fearing herself to also be infected, stops by John's office to say goodbye, but John insists on taking her in. As he reads Mary the New Testament story of Jesus healing the lepers (re-enacted on screen, with Jesus shown only from behind), a light shows Mary's hands not to be scarred at all, and that her perceived scars had disappeared in the light—a metaphor for the healing salvation of Christ. Throughout the film, the visual motif of the tablets of the commandments appears in the sets, with a particular commandment appearing on them when it is relevant to the story.

The enormous sets of ancient Egypt in the first part have become Hollywood legend in themselves. The City of the Pharaohs was constructed of wood and plaster in the Guadalupe Dunes, an 18-mile stretch of coastal sand 170 miles north of L.A. The sets featured four 35-foot-tall statues of the Pharaoh Ramses, 21 five-ton sphinxes, and city walls over 120 feet high. An army of 2,500 actors, extras, carpenters, plasterers, painters, cooks, staff and film crew members inhabited the set for three months, housed in a virtual army camp that featured nearly 1,000 tents.

The Ten Commandments was partially filmed in Technicolor at a then-astronomical cost of $1.2 million, a sum that caused a decade-long rift between Cecil B. DeMille and Paramount Pictures. DeMille's film grossed several times that amount and became the second highest-grossing film of 1923. The box-office returns held the Paramount revenue record for 25 years until it was broken by other DeMille films. The Ten Commandments competed at the box office with Fox's The Shepherd King (J. Gordon Edwards, 1923), and won out overall. DeMille's remake and also his final film, The Ten Commandments (Cecil B. DeMille, 1956) dispenses with the modern-day story to concentrate on the life of Moses (Charlton Heston).

In 1923, after the shooting had wrapped, Cecil B. DeMille simply had the massive Egyptian city sets bulldozed, and buried in a huge pit beneath the sand, where they remain to this day. For years, the legendary "Lost City of DeMille" was spoken of by locals in Guadalupe who had worked on the film set. Artifacts from the Egyptian sets were found in the dunes, and can sometimes be found in local houses in the area.

In 1983, documentary filmmaker Peter Brosnan located the remains of the DeMille sets, still buried beneath the dunes. The site is now recognized as an official archaeological site by the state of California, and it is against the law to remove artifacts from the site. Brosnan has been trying for many years to raise money from the Hollywood studios to excavate the site, but so far has been unable to do so. 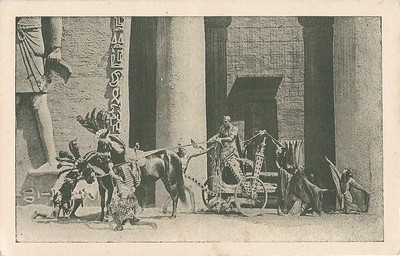 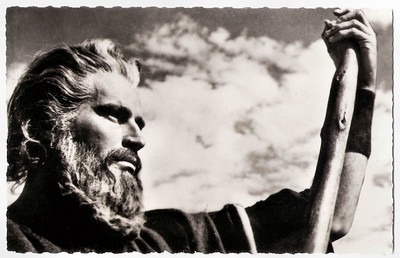