Ernst Deutsch (1890-1969) a.k.a. Ernest Dorian was an Austrian actor who acted in 42 silent films. On stage, he became famous as an expressionist actor in 'Der Sohn'(The Son) in 1916. He starred in such classic German Expressionist films as Der Golem, wie er in der Welt kam (1920) as the antihero Famulus, and Von morgens bis mitternachts (1920) in the lead role as the cashier. In 1938 the Jewish actor moved to the USA and worked in Hollywood. After the war, he returned to Austria and played Baron Kurtz in the Film Noir The Third Man (1949) 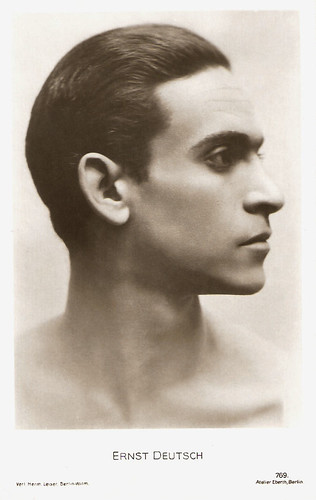 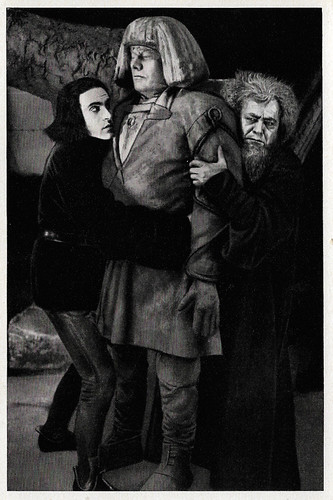 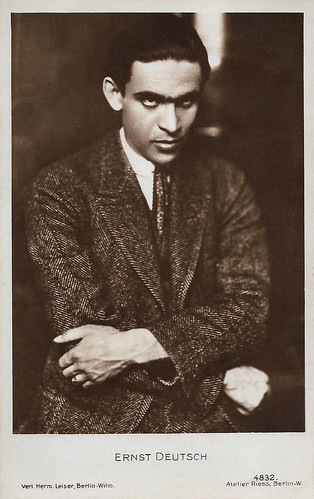 Famous as an expressionist actor


Ernst Deutsch was born in 1890 in Prague, Bohemia, Austria-Hungary He was the son of the Prague-based Jewish merchant Ludwig Deutsch and Louise Kraus. Deutsch grew up in Prague's Old Town and attended grammar school there.

He was a childhood friend of author Franz Werfel in Prague and remained so throughout his life. With their wives, they lived close together in California and visited each other frequently. Deutsch was a skilled tennis player and advanced to 7th place in the Austro-Hungarian rankings. After graduating from high school, he served in the Imperial and Royal Army as a one-year volunteer.

In 1914 Deutsch made his stage debut under Berthold Viertel at the Vienna Volksbühne (People's Theatre). After a short season in Prague, Edgar Licho hired him for the Albert Theater in Dresden, where he moved to in 1916. There he played the role of Franz Moor in Friedrich Schiller's 'Die Räuber' (The Robbers) and the role of Moritz Stiefel in Frank Wedekind's 'Frühlings Erwachen'(Spring Awakening).

He took on the title role in the world première of Walter Hasenclever's Expressionist drama 'Der Sohn' (The Son) and thus became famous as an expressionist actor. The work, which premiered on 8 October 1916, took place within a matinée in front of invited guests, such as the Royal Saxon Intendant Count Seebach, and was successfully reprised in 1918 and 1923.

In 1917 Ernst Deutsch moved to the Deutsches Theater in Berlin, which was under the direction of Max Reinhardt. There Deutsch played at various stages in the city until 1933, and also gave guest performances in Hamburg, Munich, and Vienna. He was even a participant in a South American tour in 1930. 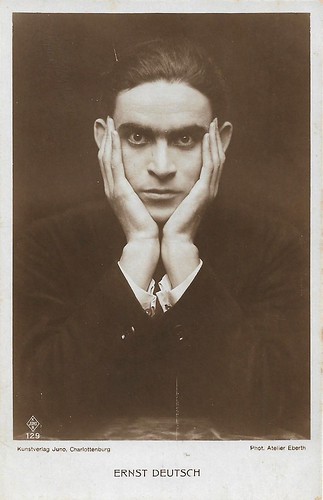 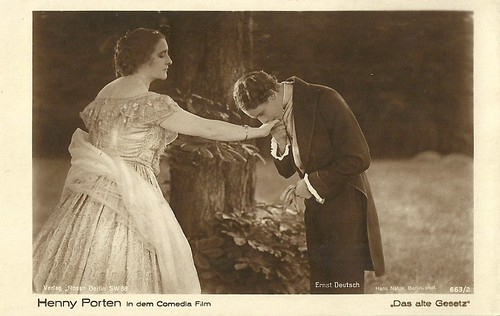 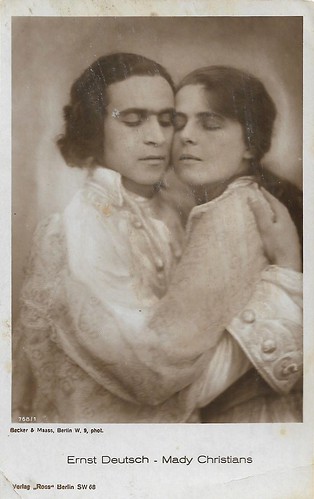 Opposite several major female stars of the era

In the late 1910s, he played opposite several major female stars of the era. Opposite Henny Porten, he acted in Irrungen/Errors (Rudolf Biebrach, 1919), Monika Vogelsang (Rudolf Biebrach, 1920) and Das alte Gesetz/This Ancient Law (Ewald André Dupont, 1923). In the latter, Deutsch played a son of an orthodox rabbi from a poor shtetl in Galizia, who decides to break with the family tradition and leave the shtetl to become an actor.

Deutsch starred himself in another Expressionist film, Von morgens bis mitternachts/From Morn to Midnight (Karlheinz Martin, 1920). The stage-like painted sets, the costumes and the performance of the actors form an artistic unity, and Von morgens bis mitternachts is considered by film critics as one of the most radical films of the German Expressionist movement. The stylised distorted sets were designed by Robert Neppach and are even more avant-garde than those of Das Cabinet des Dr. Caligari/The Cabinet of Dr. Caligari (Robert Wiene, 1920).

In December 1922, Deutsch founded Comedia Film GmbH (1922-1926) together with Hans Janowitz and Eberhard Frowein. Deutsch's last silent film was Artisten/Artists (Géza von Bolváry, 1928), in which he played an illusionist. After that, he quit film acting for years and focused on theatre. 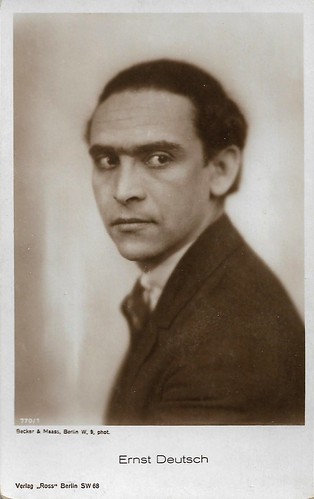 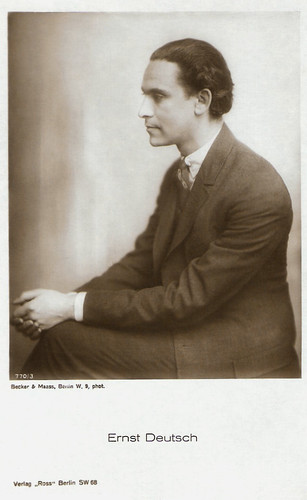 
After the transfer of power to the National Socialists, Ernst Deutsch had to emigrate from Germany in April 1933 because of anti-Semitism and initially played again in Vienna and Prague. He gave guest performances in Zurich, Brussels, and in 1936 also in London, where he acted in a rip-off of 'The Scarlet Pimpernel', 'The Marriage of Corbal' (1936), starring Nils Asther and in Charles Bennett's play 'Page From a Diary' in the West End.

In 1938 he emigrated to New York, played briefly on Broadway, and moved to Hollywood in 1939, where he received US citizenship. He started a new career in film acting, first in Nurse Edith Cavell (1939) in which he played the public prosecutor. From 1942 he acted under the pseudonym Ernest Dorian, playing mainly Nazis and officers in Hollywood films such as Reunion in France (Jules Dassin, 1942) with Joan Crawford and John Wayne.

After a guest performance in Buenos Aires in 1946, Ernst Deutsch returned to Vienna in 1947 via Paris and Switzerland, where he became an ensemble member of the Burgtheater. At the Volkstheater he played Henri Dunant, the founder of the Red Cross, in 'Der Helfer Gottes' in 1948. From 1951 he lived again in Berlin, where he played at the Schiller and Schlossparktheater. He also made frequent guest appearances at home and abroad.

Deutsch was awarded the Volpi Cup as Best Actor at the 1948 Venice Film Festival for his performance in the film Der Prozess/The Trial (G.W. Pabst, 1948), starring Ewald Balser, about antisemitism in Hungary. Next, he played Baron Kurtz in the classic Film Noir The Third Man (Carol Reed, 1949), starring Joseph Cotten and Orson Welles.

His greatest theatre successes were as Nathan the Wise in Gotthold Ephraim Lessing's classic drama 'Nathan der Weise' and as Shylock in William Shakespeare's 'The Merchant of Venice'. He embodied Nathan for more than 10 years and in over 1000 performances, traveling throughout Europe with the production, and also performing it on TV in both 1956 and 1964.

Ernst Deutsch died in 1969 in Berlin at the age of 78. In 1922, he had married his childhood friend Anuschka Fuchs from Prague. She was the daughter of the Prague industrialist Arthur Fuchs and Margarethe Ehrenzweig from Vienna. Her cousin Herbert Fuchs von Robettin was married to Franz Werfel's sister.

Deutsch is buried in the Jewish Cemetery Heerstraße in Berlin-Westend. For the fourth anniversary of his death in 1973, Friedrich Schütter's former Junges Theater in the Uhlenhorst quarter of Hamburg was renamed 'Ernst Deutsch Theater'. Deutsch had staged a performance of 'Nathan The Wise' there shortly before his death. 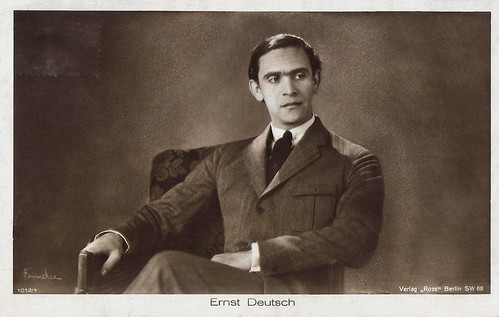 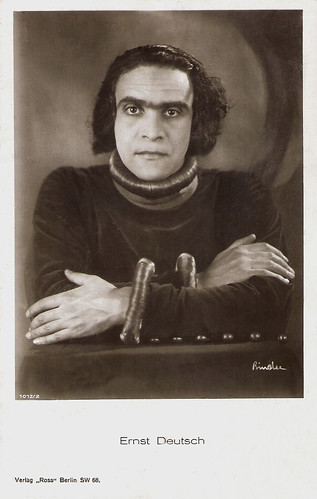