American actor John Garfield (1913-1952) played brooding, rebellious, working-class characters. Garfield is seen as a predecessor of such Method actors as Marlon Brando, Montgomery Clift, and James Dean. Called to testify before the U.S. Congressional House Committee on Un-American Activities (HUAC), he denied communist affiliation and refused to 'name names', which effectively ended his film career. The stress led to his premature death at 39 from a heart attack. 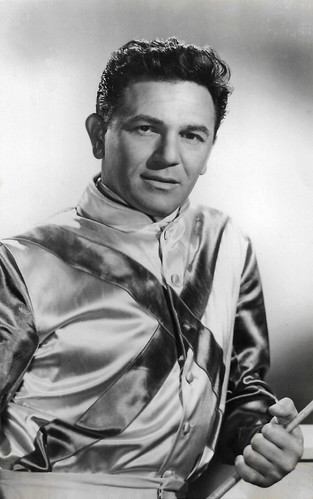 Spanish postcard by Soberanas. John Garfield in Under My Skin (Jean Negulesco, 1950). 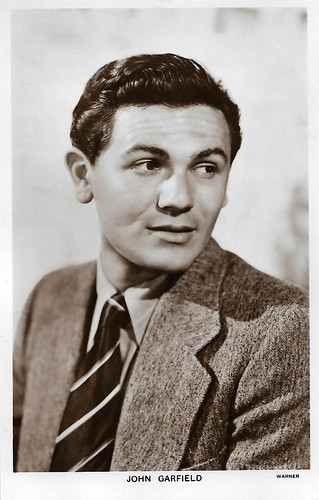 British postcard in the Picturegoer Series, London, no. 1262. Photo: Warner. 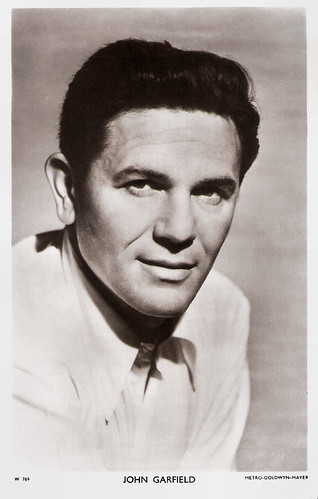 British postcard in the Picturegoer Series, no. W 769. Photo: Metro-Goldwyn-Mayer.

A name above the title


John Garfield was born Jacob Julius Garfinkle on the Lower East Side of New York City, to Hannah Basia (Margolis) and David Garfinkle, who were Jewish immigrants from Zhytomyr (now in Ukraine). Jules was raised by his father, a clothes presser and part-time cantor, after his mother's death in 1920, when he was 7. He grew up in the heart of the Yiddish Theatre District.

Jacob was sent to a special school for problem children, where he was introduced to boxing and drama. As a boy, he won a state-wide oratory contest sponsored by the New York Times with Benjamin Franklin as his subject. Garfield later won a scholarship to Maria Ouspenskaya's drama school. In 1932, he landed a non-paying job at Eva Le Gallienne's Civic Repertory, where he was recommended by his acting teachers Maria Ouspenskaya and Richard Boleslawski.

Later, he joined the Group Theatre company, winning acclaim for his role as Ralph, the sensitive young son who pleads for "a chance to get to the first base" in 'Awake and Sing'. The play opened in February 1935, and Garfield was singled out by critic Brooks Atkinson for having a "splendid sense of character development." However, Garfield was passed over for the lead in 'Golden Boy', which had especially been written for him by author Clifford Odets. When the play was first produced by the Group Theatre in 1938, the powers that be decided Garfield wasn't 'ready' to play the role of the young violinist turned boxer. Luther Adler subsequently created the role.

Embittered, Garfield signed a contract with Warner Brothers, who changed his name to John Garfield. Because both Garfield and his wife did not want to 'go Hollywood,' he had a clause in his Warner contract that allowed him to perform in a legitimate play every year at his option. The couple also refused to own a home in Tinseltown. Garfield won enormous praise for his role as the cynical and tragic composer Mickey Borden in Four Daughters (Michael Curtiz, 1938), starring Claude Rains. For his part, he was nominated for the Oscar for Best Actor in a Supporting Role.

After the breakout success of Four Daughters, Warner Bros created a name-above-the-title vehicle for him, the crime film They Made Me a Criminal (Busby Berkeley, 1939). Garfield had already made a B movie called Blackwell's Island (William C. McGann, 1939). Not wanting their new star to appear in a low-budget film, Warners ordered an A movie upgrade by adding $100,000 to its budget and recalling director Michael Curtiz to shoot newly scripted scenes. 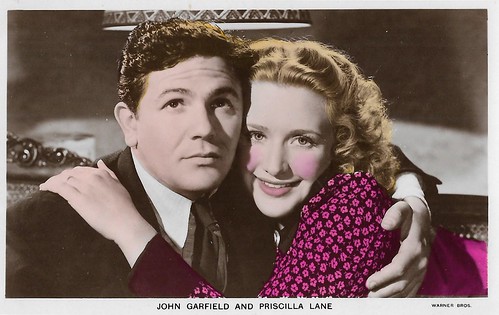 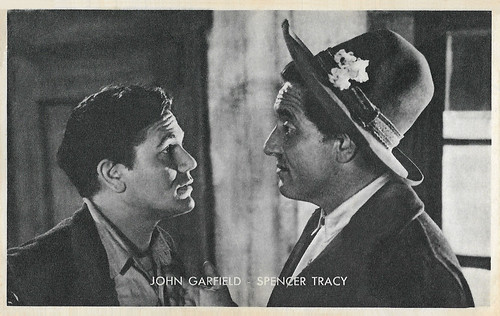 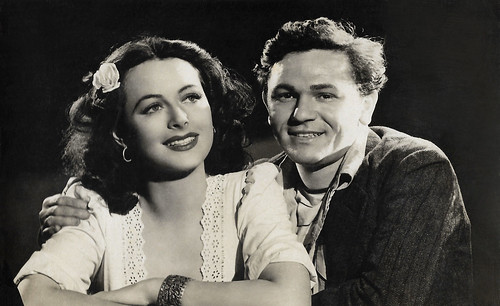 
At the onset of World War II, John Garfield immediately attempted to enlist in the armed forces but was turned down because of his heart condition. Frustrated, he turned his energies to supporting the war effort. He and actress Bette Davis were the driving forces behind the opening of the Hollywood Canteen, a club offering food and entertainment for American servicemen.

He travelled overseas to help entertain the troops, made several bond-selling tours and starred in a string of popular, patriotic films like Air Force (Howard Hawks, 1943), Destination Tokyo (Delmer Daves, 1943) with Cary Grant, and Pride of the Marines (Delmer Faves, 1945) with Eleanor Parker. All were box office successes.

Throughout his film career, John Garfield, again and again, played brooding, rebellious roles despite his efforts to play varied parts. Garfield became one of Warner Bros' most suspended stars. He was suspended 11 times during his nine years at the studio. After the war, Garfield starred in a series of successful films such as the Film Noir The Postman Always Rings Twice (Tay Garnett, 1946) with Lana Turner, and the showbiz melodrama Humoresque (Jean Negulesco, 1946) with Joan Crawford.

When his Warner Bros. contract expired in 1946, he did not re-sign with the studio, opting to start his own independent production company instead. Garfield was one of the first Hollywood actors to do so. In the Best Picture Oscar-winning Gentleman's Agreement (Elia Kazan, 1947), Garfield took a featured but supporting, part because he believed deeply in the film's exposé of antisemitism in America.

In 1948, he was nominated for the Academy Award for Best Actor for his starring role in Body and Soul (Robert Rossen, 1947) with Lilli Palmer. That same year, Garfield returned to Broadway in the play 'Skipper Next to God'. 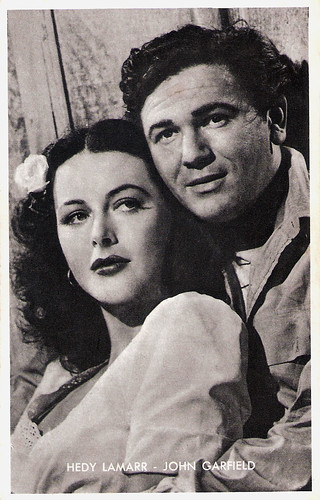 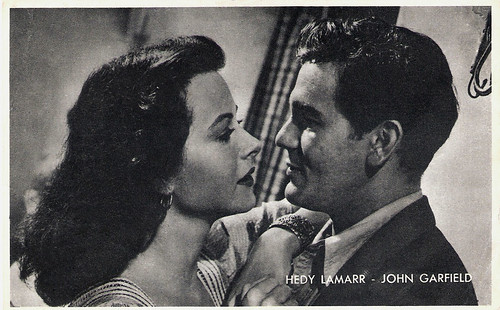 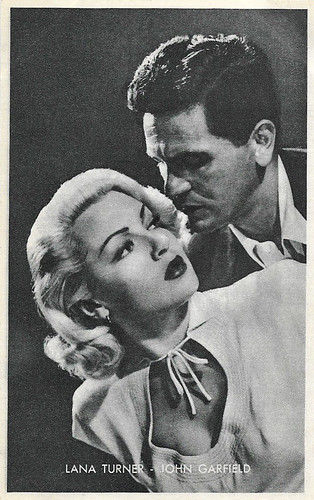 
Active in liberal political and social causes, John Garfield found himself embroiled in the Communist scare of the late 1940s. Blacklisted during the McCarthy era in the early 1950s for his left-wing political beliefs, he adamantly refused to "name names" in testimony before the House Un-American Activities Committee (HUAC) in April 1951.

In his only TV appearance, Garfield played Joe Bonaparte and Kim Stanley played Lorna Moon in a scene from Clifford Odets' 'Golden Boy' on Cavalcade of Stars: John Garfield, Kim Stanley, Paul Winchell & Jerry Mahoney (1950). With film work scarce because of the blacklist, Garfield returned to Broadway and starred in a 1951 or 1952 revival (the sources differ) of 'Golden Boy'. Garfield finally played the role which Odets had written for him and which was denied him years before at the Group Theater.

His final film was the Film Noir He Ran All the Way (John Berry, 1951), with Shelley Winters. On 21 May 1952, John Garfield was found dead of a heart attack in the apartment of a friend, former showgirl Iris Whitney. A week before he had separated from his wife, and hours before his death he completed a statement modifying his 1951 testimony about his Communist affiliations. A day earlier Clifford Odets had testified before HUAC and reaffirmed that Garfield had never been a member of the Communist Party.

Garfield was the fourth actor to die after being subjected to a HUAC investigation. The others were Mady Christians (at 59), J. Edward Bromberg (at 47) and Canada Lee (at 45). The official cause of his death was coronary thrombosis due to a blood clot blocking an artery in his heart. His funeral was mobbed by thousands of fans, the largest funeral attendance for an actor since Rudolph Valentino.

Garfield had been married to his childhood sweetheart Roberta Seidman, from 1935 till his death. They had three children, Katherine (1938-1945), actor David Garfield (1942-1995) and actress Julie Garfield (1946-). His six-year-old daughter Katharine died of an allergic reaction in 1945. He never got over the loss. John Garfield is buried at Westchester Hills Cemetery, Hastings-on-Hudson, New York. 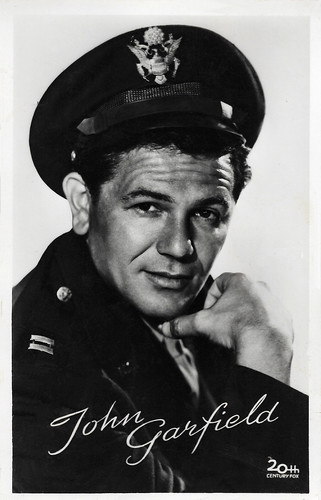 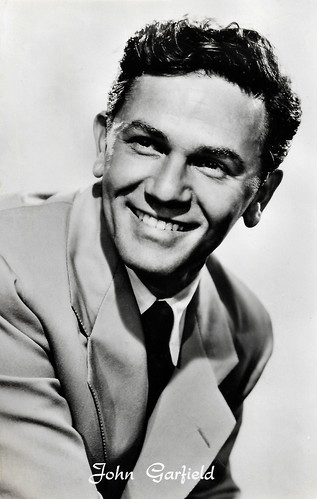 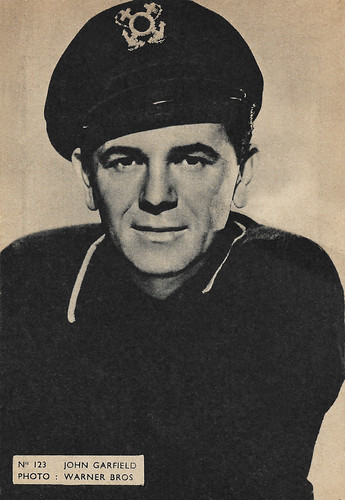 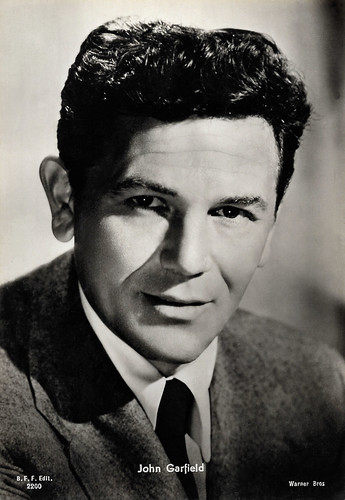 He was truly a very fine actor and gone way too soon. His style was so engaging and real, sincere and believable.