Beautiful Anita Page (1910–2008) was one of the most popular leading ladies of Hollywood during the last years of the silent screen and the first years of the sound era. According to MGM, she received the most fan mail at the time and her nickname was "the girl with the most beautiful face in Hollywood". 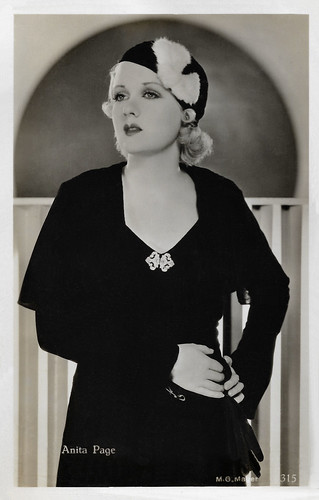 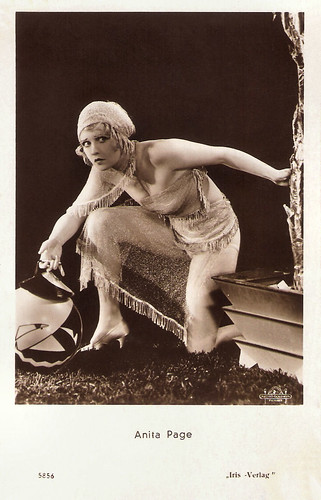 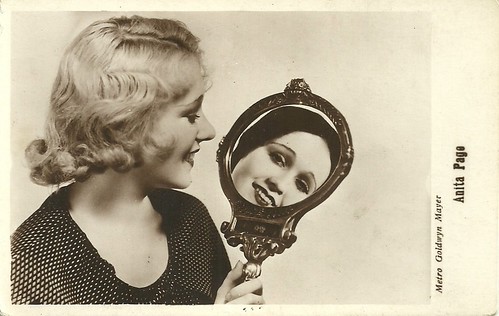 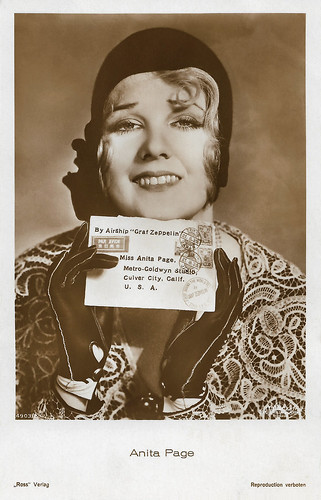 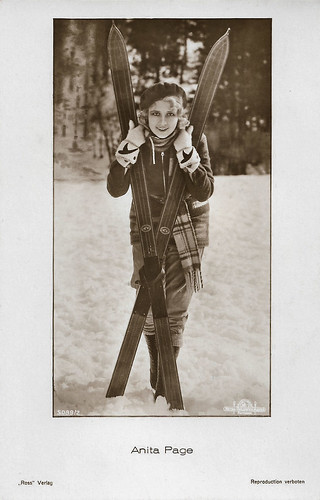 
Anita Page was born Anita Pomares in New York in 1910. Her father, Marino Pomares, had an electrical contracting business in Murray Hill, Flushing, New York City.Her mother was Helen "Maude" Mullane. After the birth of her younger brother Marino, the family moved to Astoria, a neighbourhood in the New York borough of Queens. Here she spent her childhood with her neighbours, Betty Bronson's family.

Betty Bronson made her debut in Peter Pan (Herbert Brenon, 1924), after which her family moved to Hollywood. However, they returned briefly to the East Coast for the filming of A Kiss for Cinderella (Herbert Brenon, 1925). They stayed at the Plaza Hotel and invited the young Page. Page herself had wanted to be an actress since childhood and this was noticed by Bronson. She gave her advice by sharing her own experiences of breaking through as an actress and offered her the role of an extra in A Kiss for Cinderella. Page accepted the offer.

Her one-day stay at the studio led to another bit part in Love 'Em and Leave 'Em (Frank Tuttle, 1926), which starred Evelyn Brent and Louise Brooks. An assistant advised her to take dance and acting lessons so that she "might one day grow into a star". After taking dance lessons from Martha Graham and acting lessons from John Murray Anderson, she met John Robert Powers, and Page was hired as one of his "The Power Girls". One day, he sent her to an audition at the Pathé Studio. She got a role in the short film Beach Nuts (Richard C. Harris, 1927).

Bronson introduced her to agent Harvey Pugh. He arranged a screen test and soon Page was offered a film contract with Metro-Goldwyn-Mayer. Page was cast opposite William Haines in Telling the World (Sam Wood, 1928). The film became a huge success, immediately getting Page noticed. Her next film, Our Dancing Daughters (Harry Beaumont, 1928) opposite Joan Crawford became a major success and caused a huge rise in popularity for both of them. After Lon Chaney saw Page in Our Dancing Daughters, he asked Metro-Goldwyn-Mayer to cast her in his new film, While the City Sleeps (Jack Conway, 1928). She then acted opposite Ramon Novarro in the romantic drama The Flying Fleet (George W. Hill, 1928).

Her success in MGM's first highly publicised musical The Broadway Melody (Harry Beaumont, 1929) opposite Bessie Love paved the way for a smooth career in sound cinema. After the film was released, it became a huge success. The Broadway Melody (Harry Beaumont, 1929) became the first sound film to win an Academy Award for Best Picture. It was one of the first musicals to feature a Technicolor sequence, which sparked the trend of colour being used in a flurry of musicals that would hit the screens in 1929–1930. Page also sang several songs, including the popular hit 'You Were Meant for Me', purposely written by Nacio Herb Brown for her. It would remain her theme song. 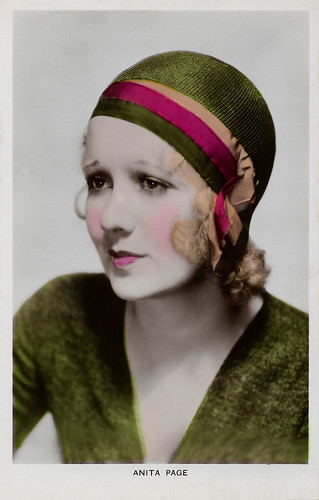 British postcard in the Colourgraph Series, London, no. C 107. 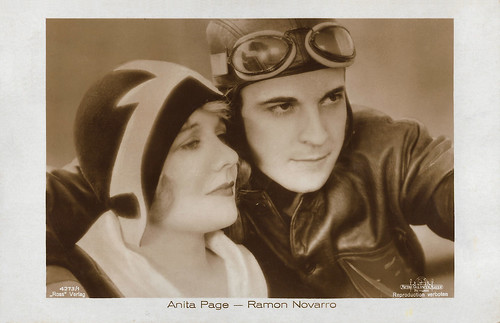 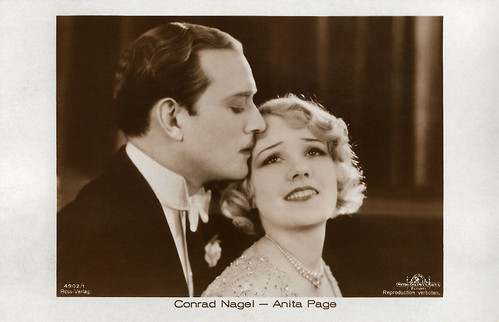 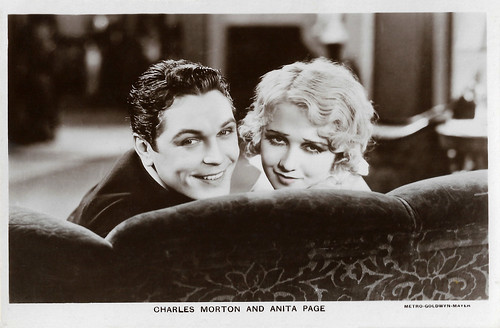 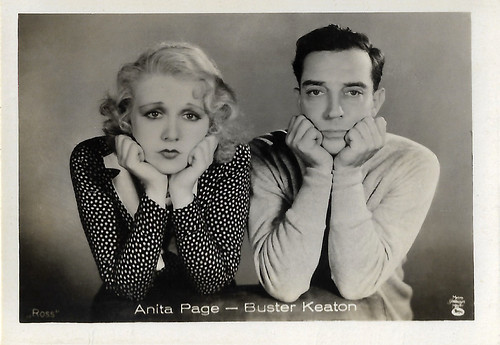 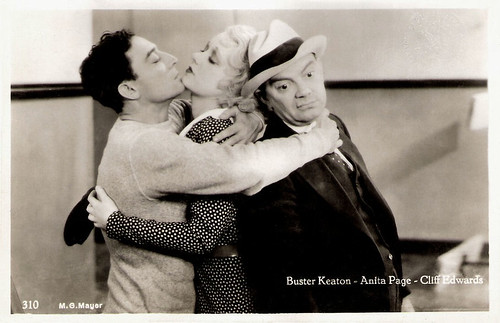 
In the early 1930s, Anita Page had a busy career in American films opposite actors like Buster Keaton, John Gilbert, Walter Huston, Robert Montgomery, and Clark Gable with whom she was romantically involved. Her mother, Helen "Maude", was her secretary. Her father, John, was her chauffeur. Her brother, Marino, was her gym instructor.

When not working on films, she was busy with studio photographer George Hurrell creating publicity shots. She was one of his first subjects, and her photograph was his first to be published. After Garbo, she was the actress who got the most fan mail and Italian dictator Benito Mussolini supposedly kept proposing to her.

At the age of 23, Page suddenly quit filming when her contract expired in 1933. She retired as she was denied a pay rise. Nacio Herb Brown, the composer of her song 'You Were Meant For Me', became her husband in 1934 until Page shortly after the wedding discovered he was a bigamist.

She made one more film, the low-budget drama Hitch Hike to Heaven (Frank R. Strayer, 1936), and then retired fully from acting. In an interview in 2004, Page told the reason was she had refused sexual favours to MGM producers Irving Thalberg and Louis B. Mayer, after which Mayer made sure she was banned from any studio. She married Navy pilot Lieutenant Hershel A. House in 1937. They lived in Coronado, California, until his death in 1991. They had two daughters, Linda House and Sandra House. Sandra, who was an artist at Disney, predeceased her.

At age 85, Anita made a come-back in Sunset After Dark (Mark J. Gordon, 1996). After sixty years of absence from cinema, she played in various low-budget horror movies such as Witchcraft XI: Sisters in Blood (Ron Ford, 2000). She loved her old films, did many interviews, and always answered her fan mail. In 2009, Anita Page died in her sleep at the age of 98 in her Los Angeles home where she had lived with her good friend, actor Randal Malone, her caretaker in her final years. They appeared together in her final film, Frankenstein Rising (Eric Swelstad, 2010). Upon her death, her remains were interred at Holy Cross Cemetery in San Diego, California. 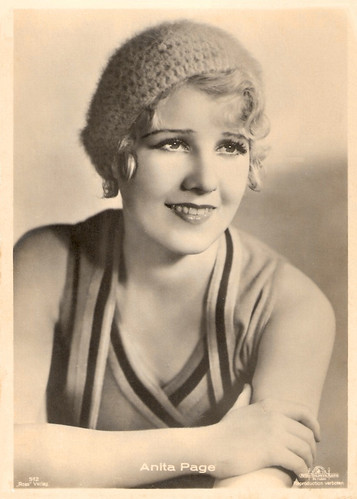 German postcard by Ross Verlag in the Luxus series, no. 512. Photo: Metro-Goldwyn-Mayer. 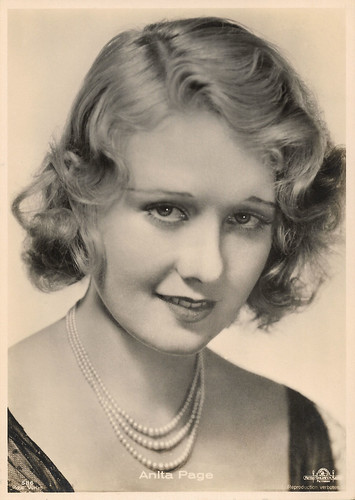 German postcard by Ross-Verlag in the Luxus series, no. 586. Photo: Metro-Goldwyn-Mayer. 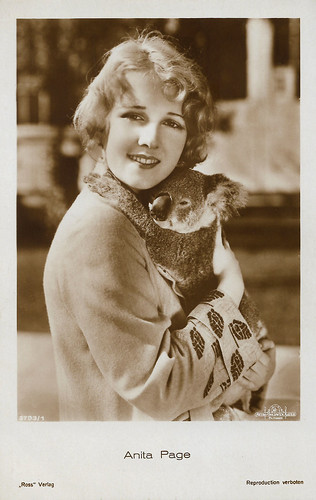 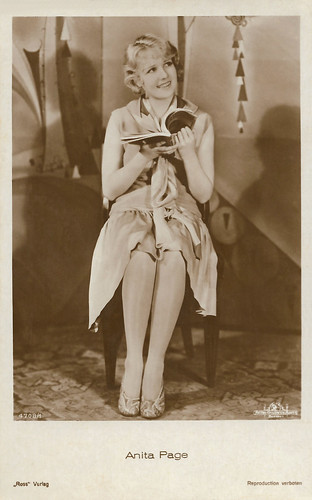 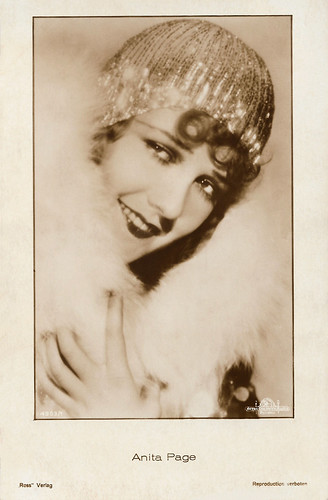 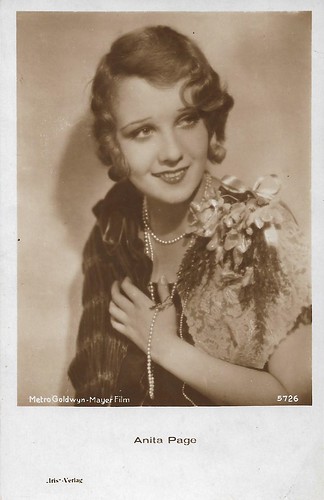 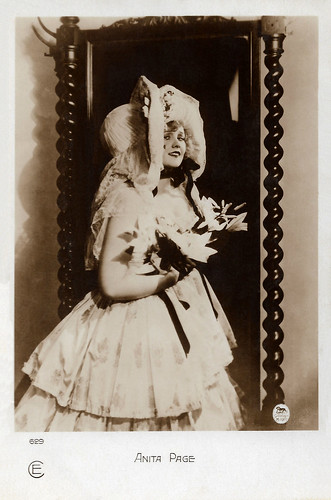 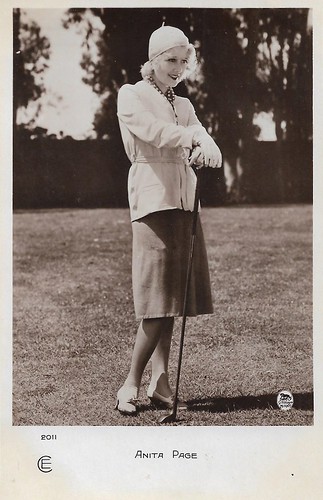 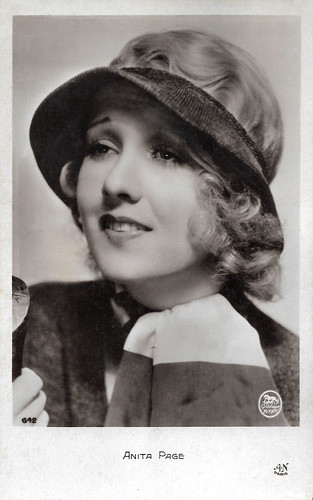 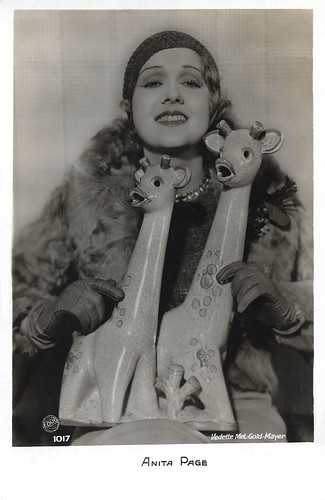 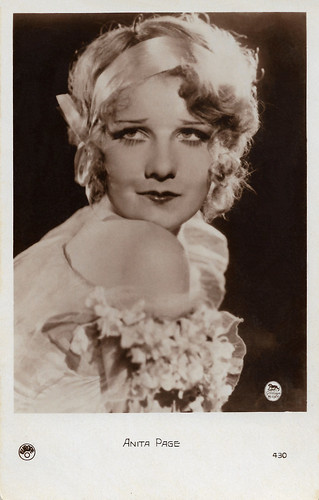 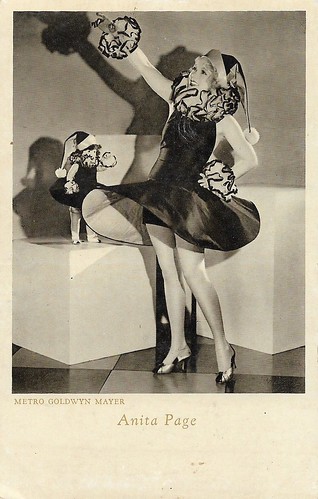 Italian postcard by Cinema-Illustrazione, Milano, Serie 1, no. 30. Photo: Metro-Goldwyn-Mayer. Cinema Illustrazione was an Italian popular film journal that existed between 1926 and 1939. 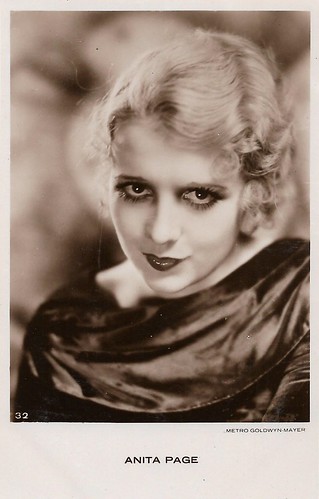 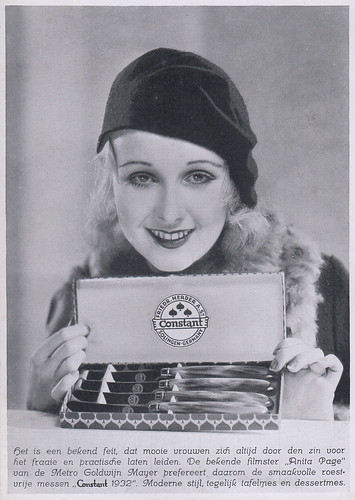 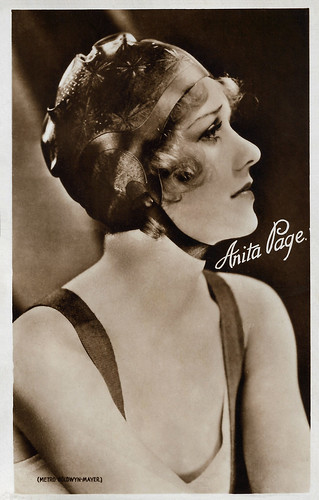 British postcard, no. 56 of a second Series of 42 Cinema Stars, issued with Sarony Cigarettes. Photo: Metro-Goldwyn-Mayer.