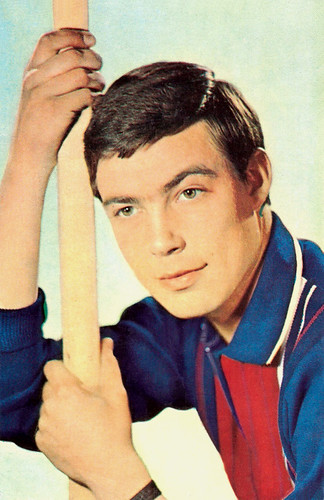 Russian postcard by Izdanije Byuro Propogandy Sovietskogo Kinoiskusstva, no. 2817, 1970. (This postcard was printed in an edition of 165.000 cards. The price was 6 kop.).

Nikolai Nikolayevich Merzlikin (in Russian Николай МЕРЗЛИКИН) was born in the village of Sartyn'ya, Tyumen region, USSR (now Russia) in 1945.

In 1965 while serving in the Army as a signalman, he unexpectedly attracted the intention of film director Tatiana Lioznova. She cast him in Rano Utrom/Early in the Morning (Tatiana Lioznova, 1965). In this Gorky Film production an orphan girl is forced to face reality when her older brother (Merzlikin), after waiting some time, contemplates marriage.

He started to study at the GITIS (the Russian Academy of Theatre Arts) and was trained by Joseph Moiseyevich Rajewski and Yevgenia Kozyrev. Meanwhile he appeared in the Mosfilm production Chelovyek, kotorovo ya liubliu/The Man I Love (Yuli Garasik, 1966) and in the popular Russian-Polish war drama Zoshya (Mikhail Bogin, 1967), about young Russian soldiers stationed in a Polish village in the summer of 1944.

That year he also appeared in another war drama, Daleko Na Zapade/Far in the West (Aleksandr Faintsimmer, 1968), a story of comradeship of soldiers of different nationalities in the French Resistance during 1944. In 1969 he graduated at the GITIS. 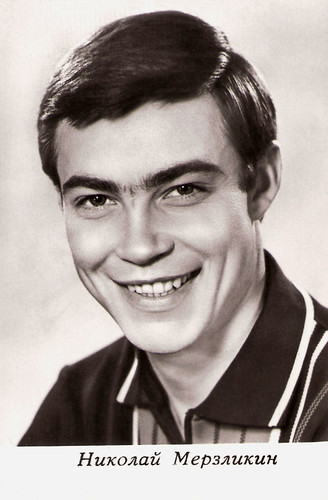 Russian postcard by Izdanije Byuro Propogandy Sovietskogo Kinoiskusstva, no. 7081, 1970. (This postcard was printed in an edition of 100.000 cards. The price was 8 kop.). 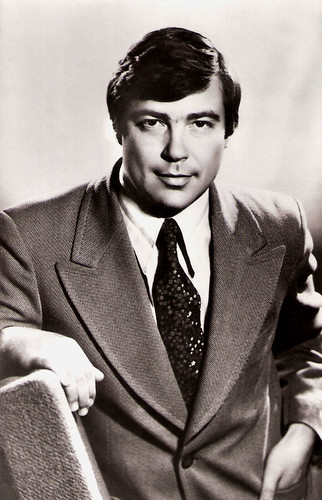 Russian postcard by Izdanije Byuro Propogandy Sovietskogo Kinoiskusstva, no. 1060, 1981. (This postcard was printed in an edition of 50.000 cards. The price was 8 kop.).

The Year of Hunger

From 1971 on, he worked as an actor of the Studio Theatre in Moscow. In the cinema he appeared opposite Natalya Varley in Chiornie Sukhari/Black Dried Crust (Herbert Rappaport, 1971), a coproduction with the East-German DEFA studio about the 'Year of Hunger', 1918, in which young Communists in Moscow sent food to the revolutionary workers in Berlin.

In the following years his film roles became smaller. Merzlikin played a supporting part in the war film Pogovorim, brat/Talk With Me, Brother (Yuri Chulyukin, 1978) and another one in the romantic comedy Ottsy i dedy/Fathers and Grandfathers (Yuri Yegorov, 1982). Although these films were seldom shown in the west, they were quite popular in Eastern Europe.

Nikolai Merzlikin died in 2007 of a heart attack in Moscow, Russia. He was 61. 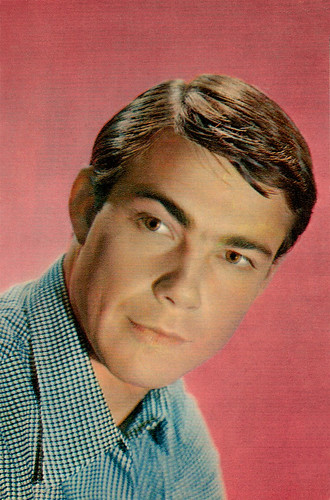 Russian postcard by Izdanije Byuro Propogandy Sovietskogo Kinoiskusstva, no. 230. (This postcard was printed in an edition of 250.000 cards. The price was 6 kop.). 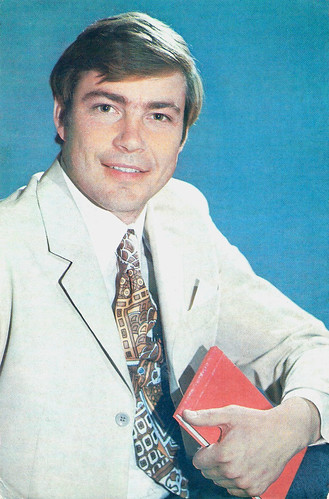 Russian postcard by Izdanije Byuro Propogandy Sovietskogo Kinoiskusstva, no. 558. Photo: G. Ter-Ovanesova. (This postcard was printed in an edition of 300.000 cards. The price was 5 kop.).