Blond twin sisters Pili and Mili Bayona (1947) were a popular comedy duo in the Spanish cinema as Pili y Mili. Their films were engaging examples of European teen pop culture of the 1960’s. 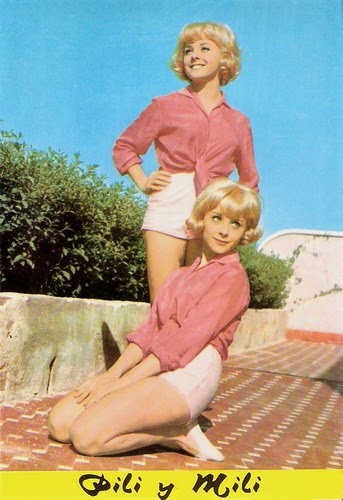 Spanish postcard by Bergas, no. 461.
Extraordinary Physical Resemblance
Pili y Mili were born as Pilar and Aurora (Emilia) Bayona Sarriá in Zaragoza, Spain in 1947. They enjoyed a short career in theater and magazines in Barcelona. Then they were discovered by producer Benito Perojo in the early 1960’s and they moved over to the cinema. Their film debut was the musical comedy Como dos gotas de agua/Like two drops of water (1963, Luis César Amadori). Their next light entertainment films included Dos chicas locas, locas/Two crazy, crazy girls (1964, Pedro Lazaga), Whisky y vodka/Whisky and Vodka (1965, Fernando Palacios) and the comic Western Dos pistolas gemelas/Sharp-Shooting Twin Sisters (1965, Rafael Romero Marchent) with Sean Flynn, the son of Errol Flynn and Lily Damita. Pili & Mili joined the boom of commercial films with other child prodigies like Marisol. In their situation comedies they exploited the comic possibilities from mistaken identity situations (which twin is which?) because of their extraordinary physical resemblance. 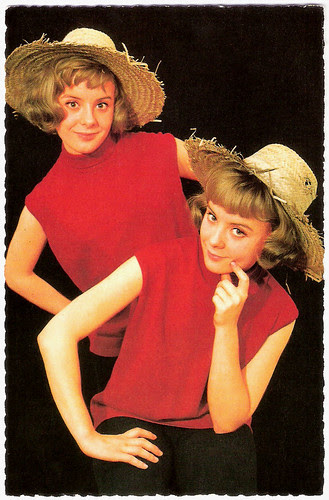 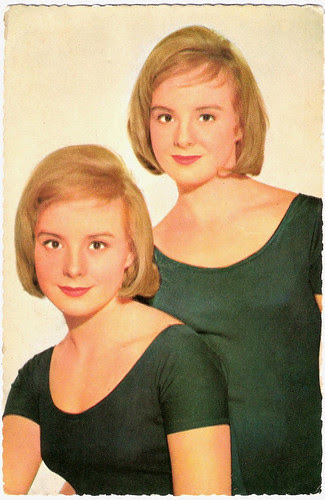