Victor McLaglen (1886 – 1959) was a Scottish boxer and World War I veteran who became a successful film actor. He started in British silent films, and later became a popular character actor in Hollywood, with a particular knack for playing drunks. 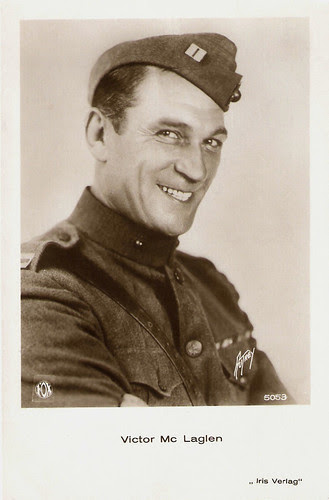 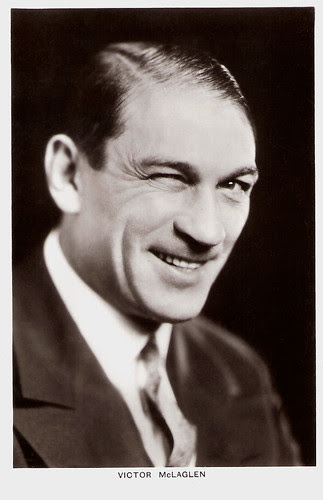 British postcard by Real Photograph, London, in the Picturegoer series, no. 208b.

An Adventuresome Young Man
Victor Andrew de Bier Everleigh McLaglen was born in Tunbridge Wells, Kent. His father, later a bishop of the Free Protestant Episcopal Church of England, moved the family to South Africa when McLaglen was a child. He had eight brothers and a sister. Four of his brothers also became actors: Arthur (1888 – 1972), an actor and sculptor, and Clifford (1892 – 1978), Cyril (1899 – 1987) and Kenneth (circa 1901 - 1979). Another brother, Leopold McLaglen, who appeared in one film, gained notoriety prior to World War I as a showman and self-proclaimed World Jujutsu Champion, who authored a book on the subject. The 14-year-old Victor left home to join the British Army. He claimed to be 18 with the intention of fighting in the Second Boer War. However, much to his chagrin, he was stationed at Windsor Castle with the Life Guards and was later forced to leave the army when his true age was discovered. Four years later, the adventuresome young man moved to Canada, where he did farm labor and then earned a living as a prizefighter. As a heavyweight boxer, 'Sharkey' McLaglen had several notable wins in the ring. One of his most famous fights was against the newly crowned Heavyweight Champion Jack Johnson in Vancouver in 1909, in a 6 round exhibition bout. Two years later, he boxed (under the pseudonym Paul Romano) Jess Willard, the Great White Hope who eventually beat Johnson in a heavyweight title bout in 1915. Between bouts, McLaglen toured with circuses, vaudeville shows, and Wild West shows, which offered $25 to anyone who could go three rounds with him. His tours took him to the US, Australia (where he joined in the gold rush) and South Africa. He returned to England in 1913 and during World War I he served as a Captain. He also continued boxing, and was named Heavyweight Champion of the British Army in 1918. After the war, he was offered a leading role in the British adventure film The Call of the Road (1920, A.E. Coleby) with Warwick Ward. Both the film and his role were well received, and he became a popular leading man in British silent films, including Corinthian Jack (1921, W. Courtney Rowden) and Carnival (1921, Harley Knoles) with Ivor Novello. 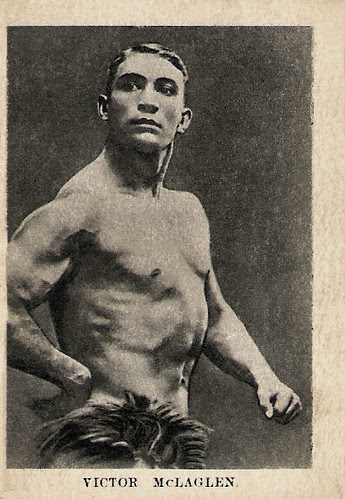 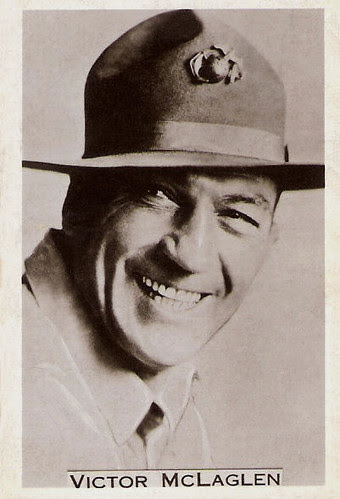 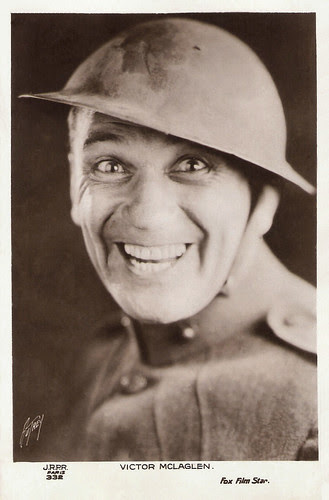 Heroes, Villains, Drunks and Simple-minded Thugs
Victor McLaglen's career took a turn in the 1920’s, when he was offered the lead in an American film, The Beloved Brute (1924, J. Stuart Blackton). Jim Beaver at IMDb: “He quickly became a most popular star of dramas as well as action films, playing tough or suave with equal ease. With the coming of sound, his ability to be persuasively debonair diminished by reason of his native speech patterns.” He was nearly fifty before he finally became a star with films like The Lost Patrol (1934, John Ford) with Boris Karloff, and The Informer (1935, John Ford). The highlight of his career was an Academy Award for Best Actor for his role as the tragic Gypo Nolan in The Informer, based on an Irish novel by Liam O'Flaherty. During his career, he played many Irishmen, leading many people to mistakenly assume he was Irish rather than British. McLaglen was especially popular with director John Ford, who frequently included him in his films. He continued to play heroes, villains, drunks and simple-minded thugs into the 1940’s, when Ford gave his career a new impetus with a number of lovably roguish Irish parts in such films as She Wore a Yellow Ribbon (1949). Near the end of his career, McLaglen was again nominated for an Oscar, this time for Best Supporting Actor, for his role opposite John Wayne in The Quiet Man (1952, John Ford). He won again. In spite of being a powerful hulk his whole life (his huge shoulders making even John Wayne's look small), he was sixty-four and in declining health at the time. Even prickly John Ford was sensitive to McLaglen's condition while shooting that movie's grueling fight sequence. Toward the end of his career, McLaglen made several guest appearances on television. Victor McLaglen was married three times. His first marriage was to Enid Lamont in 1919. The couple had one daughter, Sheila, and one son, television and film director Andrew McLaglen. Andrew’s children, Mary and Josh McLaglen, are both film producers and directors. Sheila's daughter, Gwyneth Horder-Payton, is a television director. Enid Lamont McLaglen died in 1942 as a result of a horse riding accident. Victor McLaglen married twice more. His second marriage was to Suzanne M. Brueggeman. That marriage lasted from 1943 until 1948. His third and final marriage was to Margaret Pumphrey, whom he married in 1948. They remained married until his death of a heart attack in 1959. He died about a month after his final role in an episode of the TV series Rawhide (1959), directed by his son Andrew V. McLaglen. In 1933, Victor McLaglen had become a naturalized US citizen. 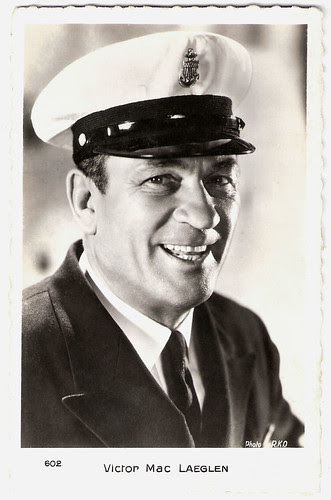 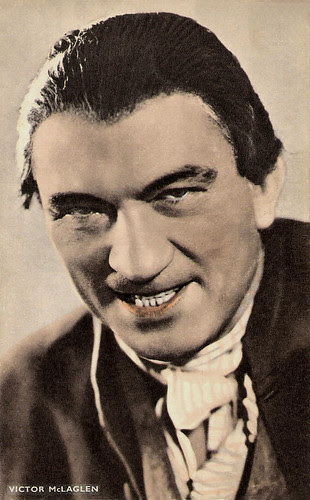 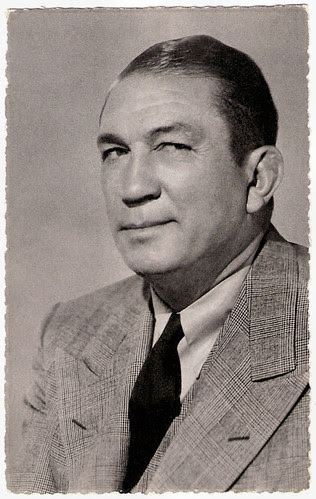 What an amazing life. Victor and his son have certainly created a rich cinematic legacy