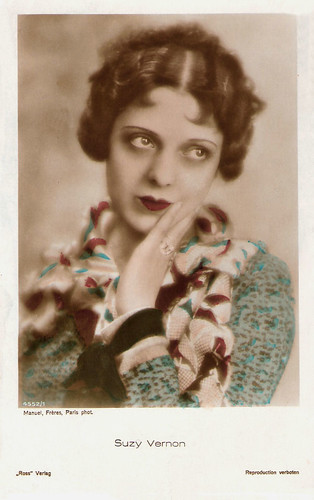 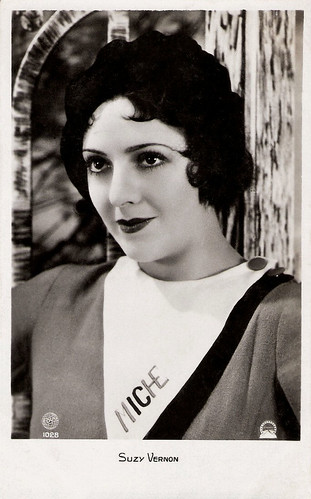 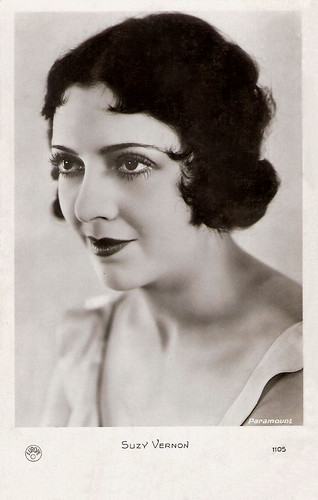 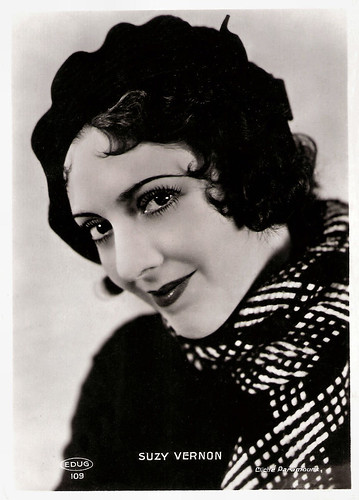 Napoleon
Suzy Vernon was born as Appollinie Paris in Nice, France, in 1901. She made her film debut in La Conquête des Gaules/The Conquest of the Gauls (1922, Marcel Jonnet, Jan B. Dyl) based on the book Commentaries on the Gallic War by Gaius Julius Caesar. Famous Belgian director Jacques Feyder gave her a part in his film Das Bildnis/L’image (1923, Jacques Feyder). She also appeared as the mother of Jean Forest in Feyder’s realistic mountain drama Visages d'enfants/Children’s Faces (1925, Jacques Feyder). In 1988, the Belgian Film Archive released a restored print of this classic film. Feyder had a considerable influence on European filmmaking. His films were noteworthy for their introduction of Poetic Realism, a style which eventually became a cinematic movement. Suzy Vernon next appeared in Napoléon (1927, Abel Gance), a silent, historical epic of 235 minutes. It was the chef d'oeuvre of legendary French filmmaker Abel Gance, who intended it as the first installment in a multipart film study of the French military hero. Napoléon was largely designed as a showcase for the revolutionary Polyvision process, which utilized multiple images for dramatic effect. In Germany, Vernon appeared with Nils Asther in Gauner in Frack/Crooks in Tails (1927, Manfred Noa) and next to Willy Fritsch in Der Letzte Walzer/The Last Waltz (1927, Arthur Robison), based on the same-named operetta by Oscar Strauss - minus the musical score. She costarred with celebrated Russian actor Ivan Mozzhukhin in the melodrama Der Präsident/The President (1928, Gennaro Righelli), and she costarred with the Italian diva Francesca Bertini in Tu M'Appartiens/You Belong to Me (1929, Maurice Gleize). Her last silent production was the German detective film Das grüne Monokel/The Green Monocle (1929, Rudolf Meinert) with Ralph Cancy (sometimes written as Clancy) as detective Stuart Webbs. 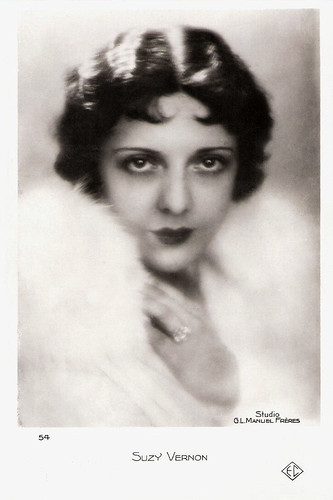 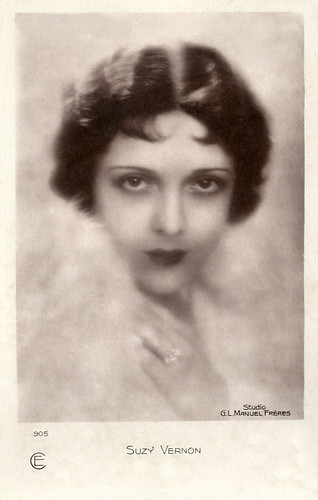 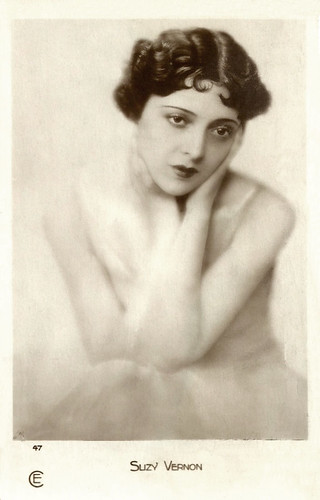 French postcard by Editions Cinémagazine, no. 47.

Alternative Language Versions in Hollywood
After the sound film arrived, Suzy Vernon went to the USA. There she appeared in some French language versions of Hollywood productions. For First National she played in Le masque d'Hollywood/Woman Hunter (1930, Clarence G. Badger, John (Jean) Daumery), an alternative language version of Show Girl in Hollywood (1930). She also played the female lead opposite Daniel Mendaille in Contre-Enquete/Cross Investigation (1930, Jean (John) Daumery). This was one of three different versions of the George Kibbe Turner gangster novel Those Who Dance, each filmed in a different language. The English version starred Monte Blue and Lila Lee; and the German version, Der Tanz Geht Weiter top-billed Wilhelm (William) Dieterle and Lissi Arna. Vernon also appeared in the English language white slavery melodrama Girls for Sale! (1930, Bud Pollard) with Vivian Gibson. Another early talkie was Le Chanteur de Seville (1930, Yvan Noé, Ramon Novarro), the French-language version of the Technicolor MGM musical drama Call of the Flesh. Silent Superstar Ramon Novarro repeated his role as Juan, a young aspiring singer who is advised that he will never achieve greatness until his heart is broken. Though the original Call of the Flesh was directed by Charles J. Brabin, the French version was helmed by Novarro, who, according to Hal Erickson at AllMovie “did a commendable job”. 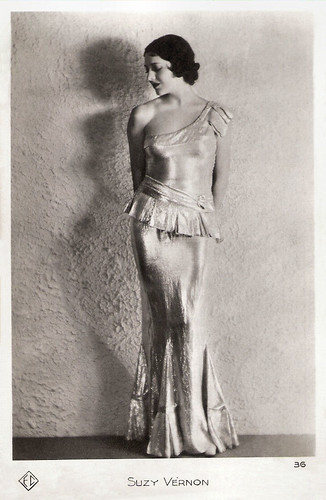 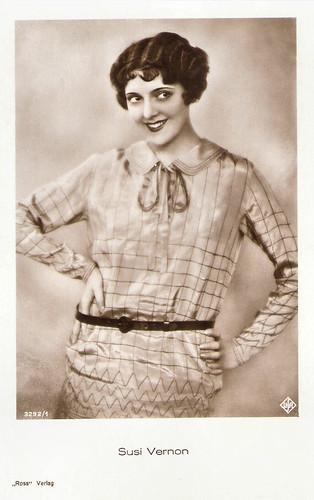 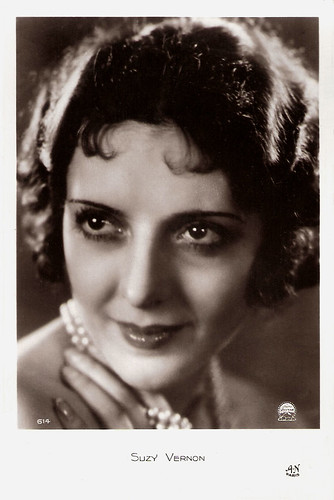 International Shooting Locations
For her next films, Suzy Vernon traveled to other international locations. La Femme de Mes Reves/My Dream Woman (1931, Jean Bertin) with Roland Toutain was filmed in Berlin. It was also simultaneously filmed in a German-language version, Eine Nacht im Grandhotel (1931). Miraculously, both versions came in for a combined cost of only $100,000. Filmed in North Africa was the Foreign Legion melodrama Le Sergent X (1932, Vladimir Strizhevsky), in which she again costarred with Ivan Mozzhukhin. The romantic comedy Miche (1932, Jean de Marguenat) was purportedly set in Switzerland, but filmed at Paramount's French studios in Joinville. She starred for director Jacques Tourneur in the romantic comedy Pour être aimé/For Being Loved (1933) with Pierre Richard-Willm. One of her last major films was the anecdotal seriocomedy Un homme en or/A Man and His Wife (1934, Jean Dréville) with Harry Baur. In 1940 after some incidental smaller roles in the late 1930’s she retired from the film business. She was married to Ralph de Leon. After their divorce, she married a Lebanese doctor. In 1958 she followed her husband to Lebanon, and nobody, not even her family got any news from her. Suzy Vernon seemed to have disappeared, but it is known that she died in 1997 in Moulins, France. 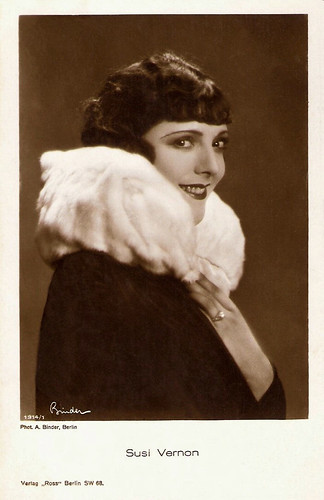 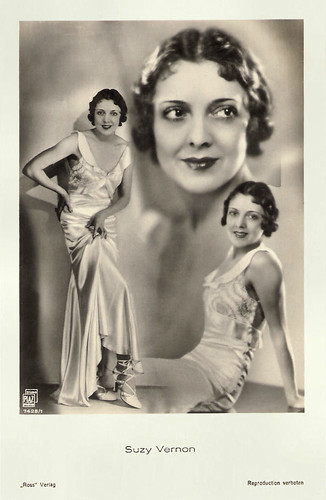 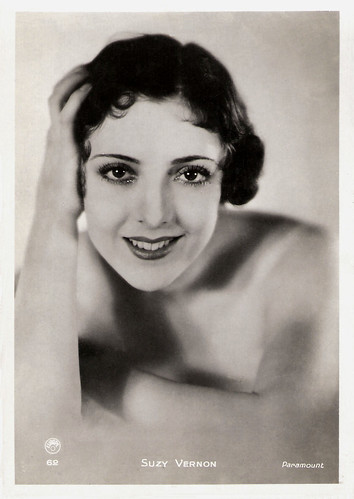 God sh's gorgeous. WHat intense haunting eyes. SHame on me for not knowing this Napoleon film. I'm going to Paris this weekend and wil HAVE to look for it..well search..it'll be a toughie to find. Hmmm.. any hints? How do you track down all of your old films?

She's a beauty, Suzy Vernon! It's just amazing you have access to these postcards and thank you for the extensive info! Your blog is tres interessante! :)

She is not a conventional beauty, but there's something about her face. I would have liked to have met her.

Suzy's eyelashes were to die for! Her hubby looks like he was very debonair. These old stars really knew how to project star quality.