Horst ‘Hotte’ Buchholz (1933-2003) was the James Dean of the German Cinema. He was often type casted as a rebellious teenager in the late 1950s. Horst appeared in over sixty films between 1952 and 2002 and is now best remembered as the Mexican gunfighter Chico in The Magnificent Seven (1960). 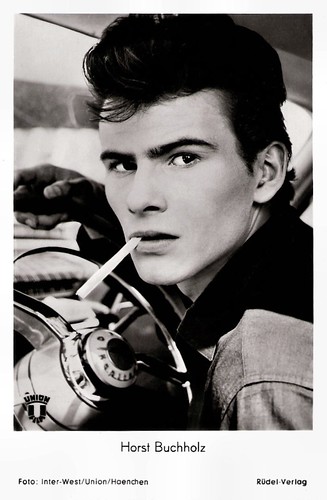 Horst Werner Buchholz was born in Berlin, Germany, in 1933. His father was a German shoemaker, while his mother was born to Danish parents. At the end of the war he found himself in a foster home in Czechoslovakia.

Back in Berlin he landed his first stage role at 15 in a theatre version of the German children's classic Emil und die Detective (Emil and the Detectives). In the next years he established himself in the theatre and on the radio. After some dubbing work he expanded into film in 1952.

He had a supporting part in Marianne, meine Jugendliebe/Marianne My Teenage Love (Julien Duvivier, 1955) starring Marianne Hold, and he won a Best Actor award at Cannes for his lead in Himmel ohne Sterne/Sky Without Stars (Helmut Käutner, 1955).

His star making role was the biker-gang leader Freddy in Die Halbstarken/Teenage Wolfpack (Georg Tressler, 1956) with Karin Baal. Hal Erickson at AllMovie: "With the exception of Buchholz, most of the young toughs in the film are nonprofessionals, exuding a raw energy that many 'pros' could not emulate. Most of Die Halbstarken was lensed on location in genuine gang-ridden urban neighborhoods."

Another major film was Bekenntnisse des Hochstaplers Felix Krull/Confessions of Felix Krull (Kurt Hoffmann, 1957) based on the novel by Thomas Mann. The film, and its young star, received international acclaim.

Horst Buchholz began appearing in foreign films from 1959 on. He was a villain in the British thriller Tiger Bay (J. Lee Thompson, 1959).

That same year he made his Broadway debut with Cherie. In Hollywood, he followed that with the western The Magnificent Seven (John Sturges, 1960), the dramatic romance Fanny (Joshua Logan, 1961) and the Berlin-set comedy One, Two, Three (Billy Wilder, 1961), but then his star started to fade.

As an international star he played Gandhi's assassin in Nine Hours to Rama (Mark Robson, 1963), and Marco Polo in La fabuleuse aventure de Marco Polo/Marco the Magnificent (Denys de la Patelliere, 1965), but his particular moment was over.

He took the parts as they came and appeared in comedies, horror films and war dramas, in films and on television, both in the US and in Europe.

Since 1985, Horst Buchholz mostly appeared in European films such as I skrzypce przestaly grac/And the Violins Stopped Playing (Alexander Ramati, 1988) in which a group of gypsies flee Nazi persecutors, and the fantasy film In weiter Ferne, so nah!/Faraway, So Close! (Wim Wenders, 1993).

His last important role was in the Oscar-winning La vita è bella/Life Is Beautiful (Roberto Begnini, 1997). He played the doctor whose obsession with puzzles blinds him to his ability to help Roberto Benigni in the concentration camp.

Thanks to his gift for languages, Buchholz was able to dub himself in the foreign releases of the film.

Out of the Closet

In 2000, Horst Buchholz came out of the closet in the German magazine Bunte as having 'bisexual tendencies'.

In 2003, Horst Buchholz died in intensive care in Berlin of pneumonia while recovering from a broken thighbone. He was 69.

He was married to French actress Myriam Bru, with whom he had two children, Christoph and Beatrice. His son Christopher Buchholz directed the documentary Horst Buchholz... mein Papa/Horst Buchholz... My Dad (Christoph Buchholz, Sandra Hacker, 2005), which deals with his father's life and their relationship.