English film actor and director Anthony Bushell (1904-1997) appeared in 56 films between 1929 and 1961. Bushell was a cultured performer with a penchant for playing military men, such as in James Whale’s Journey's End (1930). He also appeared in and directed various British TV series like Danger Man (1961). 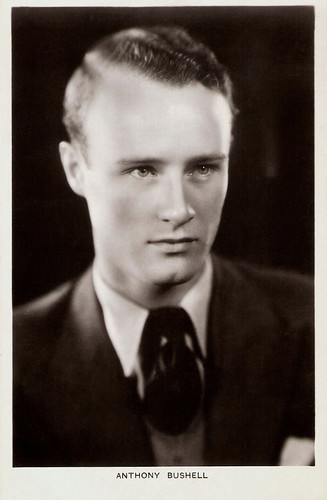 British postcard in the Picturegoer Series, London, no. 485. 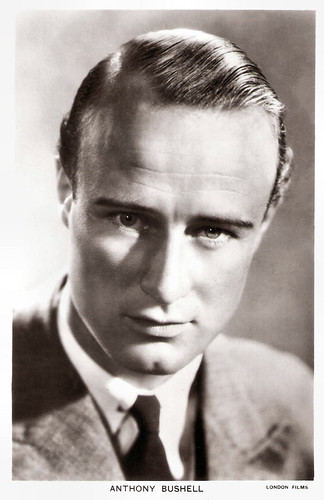 British postcard in the Picturegoer Series, London, no. 485a, Photo: London Films.

Anthony Arnatt Bushell was born in Westerham, Kent, in 1904 and he was educated at Magdalen College School, and then Hertford College, Oxford. After Oxford, he trained at the Royal Academy of Dramatic Art and got his start on stage from Sir Gerald du Maurier, making his theatrical debut in Victorien Sardou's Diplomacy at the Adelphi Theatre in 1924.

Bushell worked in the U.S. for a time in 1927-1928, touring in Her Cardboard Lover with Jeanne Eagels. In 1928 he met American actress Zelma O'Neal, who was performing on the London stage in the musical Good News. They married in New York in 1928, when he was appearing on Broadway in W. Somerset Maugham's The Sacred Flame and she was preparing to open in the musical Follow Thru.

George Arliss saw Bushell on Broadway and when he was cast as the lead in his first talkie, Disraeli (Alfred E. Green, 1929), an American biopic of the famed British Prime Minister, he recommended Bushell for the role of Disraeli's young rival Charles Deeford.

Bushell was cast in another American film Jealousy (1929), but after shooting was completed all his scenes were re-shot with Frederic March at the insistence of his co-star Jeanne Eagels.

He appeared in the first American-British co-production of the sound era, the war drama Journey's End (James Whale, 1930) with Colin Clive. His other Hollywood films, also often saw him in the military roles that became his speciality. 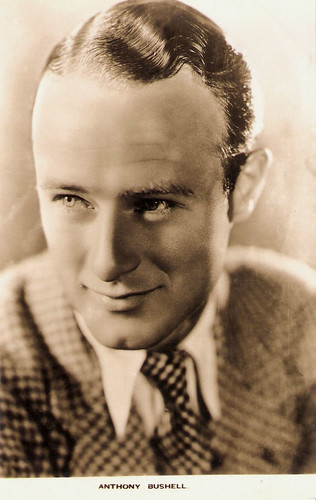 In the armed forces

In 1930, Anthony Bushell and his wife took a delayed honeymoon trip to Germany, France, and England. They relocated to London in 1932, where she established a second stage career. They divorced in 1935. Following their divorce, they appeared in the same show at least once, though they did not appear together on stage. O'Neal returned to New York in June 1937.

He had a brief affair with Patricia Roc, with whom he appeared and gave her first onscreen kiss in film The Rebel Son (Adrian Brunel, Albert de Courville, Alexis Granowsky, 1938) set in 17th-century Ukraine. Wikipedia quotes Graham Greene, who wrote in The Spectator a sarcastic assessment of the film, which he left a half hour: "I liked particularly the scene when the young Cossack (played by Mr. Anthony Bushell with his keen young Oxford accent) bursts into the bedroom of the girl he loves, 'I know it's very late to call but ... O I am glad you are not angry.'"

In Arsenal Stadium Mystery (Thorold Dickinson, 1939) the Arsenal football team appeared and Bushnell played their star football player who is poisoned during a match. In The Lion Has Wings (Adrian Brunel, Brian Desmond Hurst, Michael Powell, 1939), a documentary-style anti-German propaganda film, he was cast, in one critic's words, as one of several "idiosyncratic but not over well-known actors" who could stand in for RAF crew members.

In 1939, he joined the British Armed Forces, was commissioned in the Welsh Guards and served in the Guards Armoured Division as a tank squadron commander. During the war he married his second wife, Anne. 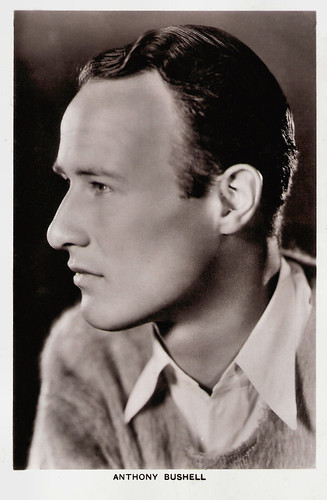 British postcard in the Picturegoer Series, London, no. 485 a.

The Angel with the Trumpet

After the war, Anthony Bushell developed a relationship with Laurence Olivier, at whose urging he served as associate producer on Olivier's Shakespearean production Hamlet (1948) and later as associate director on Richard III (1965) and The Prince and the Showgirl (1957), helping with Olivier's scenes in these films.

He directed for the first time in 1950, using material from an earlier Austrian filmed called Der Engel mit der Posaune (Karl Hartl, 1950), with Maria Schell. He substituted new scenes with British actors where necessary and dubbed minor roles to create an English-language version, The Angel with the Trumpet (1951). Bushell also took the role of Baron Traun, companion to Rudolf, Crown Prince of Austria.

Of his direction in partnership with Reginald Beck of The Long Dark Hall (1951), Wikipedia quotes a critic: "The tandem direction is surprisingly able and occasionally inventive." However, Hal Erickson at AllMovie writes that his three films (the third was The Terror of the Tongs (1961)) were “profitable if undistinguished”.

During the 1950s, Bushell also played King Arthur in The Black Knight (Tay Garnett, 1954), and the captain of the Carpathia in an early version of the Titanic disaster, A Night to Remember (Roy Ward Baker, 1958).

In the early 1960s, he directed segments of The Valiant Years, a documentary based on the memoirs of Winston Churchill. Though it was a documentary, and BBC rules forbade the use of re-enactments, Bushell appeared in one scene as an RAF air marshal deriding British attempts to sway German public opinion by dropping leaflets on their cities early in World War II. He was filling in for Sir Arthur ‘Bomber’ Harris and speaking Harris' words only because illness prevented Harris from participating on the day scheduled for filming.

He retired in 1964, and he later served as director of the Monte Carlo Golf Club. Anthony Bushell died in Oxford in 1997. He was 92.