Fair-haired Nicole Berger (1934-1967) was a French leading lady of the 1950s and 1960s, who appeared in several Nouvelle Vague films. Her promising career was cut short by a car crash near Rouen. 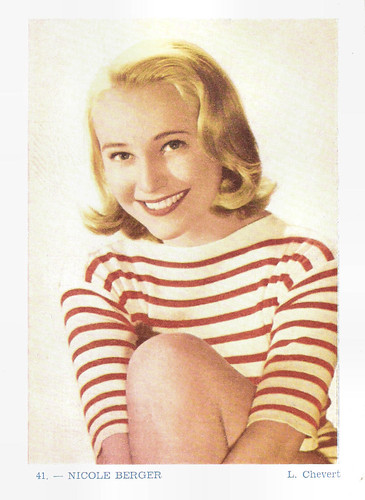 
Nicole Berger was born Nicole Gouspeyre in Paris in 1934. She had a brief theatrical career, particularly in the Compagnie Barrault-Renaud, before she started to work in the cinema.

She made her film debut in a small part in Jocelyn (Jacques de Casembroot, 1952) as the sister of Jean Desailly and then played a supporting part in the French comedy Julietta (Marc Allégret, 1953|), starring Dany Robin and Jean Marais.

The following year, director Claude Autant-Lara gave her her first real chance. He offered her one of the three leading roles opposite Edwige Feuillère and Pierre-Michel Beck in Le Blé en herbe/The Game of Love (Claude Autant-Lara, 1954), based on the novel by Colette.

She then played in several international films. In Germany she starred in Ein Mädchen aus Flandern/The Girl from Flanders (Helmut Käutner, 1956) and in the Swedish-Argentinean film Livets vår/Spring of Life (Arne Mattsson, 1958) with Folke Sundquist. She also played a supporting part in the French film Celui qui doit mourir/He Who Must Die (Jules Dassin, 1957), starring Jean Servais and Carl Möhner. The film, based on the novel O Hristos Xanastavronetai (Christ Recrucified) by Nikos Kazantzakis, was entered into the 1957 Cannes Film Festival.

She reunited with Claude Autant-Lara for the crime film En cas de malheur/Love Is My Profession (Claude Autant-Lara, 1958), after a novel by Georges Simenon. She played the maid of femme fatale Brigitte Bardot. That year she also starred in Véronique et son cancre/Veronique and Her Dunce (1958), a short comedy film by Éric Rohmer, which he directed before his series of Contes moraux/Six Moral Tales.

She also appeared in the short Tous les garçons s'appellent Patrick/All Boys Are Called Patrick (1959) written by Éric Rohmer and directed by Jean-Luc Godard. Michael Buening at AllMovie: “a slight, but charming, story about two girlfriends (Nicole Berger and Anne Collette) who are seduced by Lothario Patrick (Jean-Claude Brialy) over sidewalk café Cokes and on Tuileries park benches. When both Charlotte and Véronique arrive for the date, Patrick brings another woman. The story is told in a fairly straightforward style. Godard's early love of youthful frivolity, pop culture, and referential film geekery are in abundant evidence (the girls' apartment walls are decorated with film posters, they mimic their idols) and there are some tentative steps taken with visual and audio jump cuts.”

In the following years Rohmer and Godard would achieve fame as directors of the Nouvelle Vague, the French New Wave. She also worked with François Truffaut and appeared in his feature film Tirez sur le pianist/Shoot the Piano Player (François Truffaut, 1960) starring Charles Aznavour as a small time piano player in a bar who has a secret past that he keeps hidden. 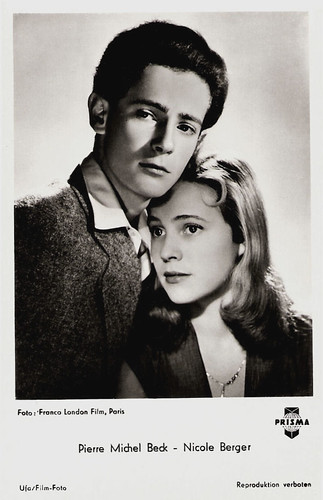 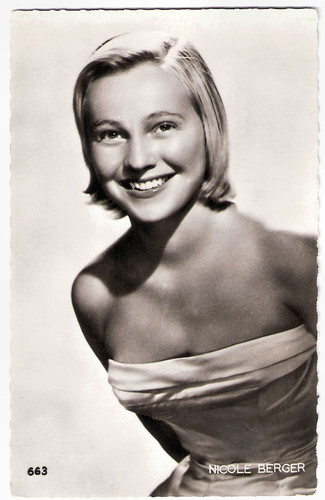 The father of the Blaxploitation

In France she appeared in the crime dramas La denunciation/The Denunciation (Jacques Doniol-Valcroze, 1962) opposite Maurice Ronet, and Chair de poule/Highway Pickup (Julien Duvivier, 1963) starring Robert Hossein and Catherine Rouvel. The screenplay of the latter is based on the novel Come Easy, Go Easy by James Hadley Chase.

James Travers at Films de France: “Chair de poule is among the most overlooked and underrated of Julien Duvivier's films and yet, whilst clearly not the director's greatest work, it has many commendable features and serves as a highly respectable homage to the American film noir thrillers of the 1950s.”

During the 1960s Nicole Berger turned to television, and played in several TV-films. She was also the protagonist of the popular soap Cécilia, médecin de campagne/Cecilia country doctor (André Michel, 1966).

Her final film was the experimental feature La Permission/The Story of a Three-Day Pass (Melvin Van Peebles, 1967). Wikipedia: "In the early 1960s, young filmmaker Melvin Van Peebles was unable to establish himself as a film director in Hollywood because the concept of a black director was unheard of in America at that time. Consequently, he went to France, learned the language, and wrote La Permission in French. Learning he could adapt one of his novels into film with a $60,000 grant from the French Cinema Center, so long as his film was 'artistically valuable, but not necessarily commercially viable,' he sought a film producer, and shot La Permission in 36 days for a cost of $200,000."

Harry Baird plays a black American GI, Turner, who falls in love with a French girl (Nicole Berger). Upon his return from an idyllic weekend, Turner is demoted by his bigoted captain for fraternising with a white girl. In the following years, Van Peebles became the father of the ‘blaxploitation’ film.

In 1967, Nicole Berger was killed in a car crash not far from the French town of Rouen. She was thrown from a car driven by actress Dany Dauberson. Berger was only 32. 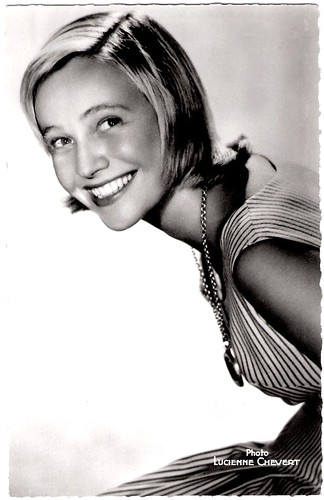