World boxing champion Marcel Cerdan (1916–1949) was France's greatest boxer with the nickname ‘The Casablanca Clouter’. His life was marked by his sporting achievements, his passionate love affair with Édith Piaf and his tragical death. He appeared in two films and was portrayed in two films. 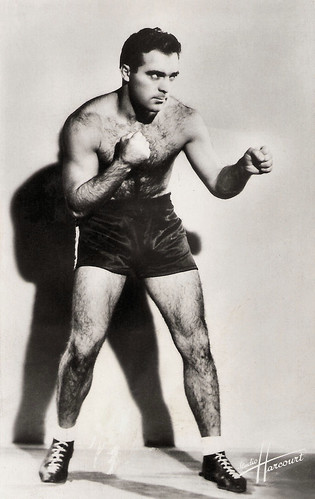 
Marcellin ‘Marcel’ Cerdan was born in Sidi Bel Abbès in what was then French Algeria in 1916.

He began boxing professionally in 1934 in Meknes, Morocco, beating Marcel Bucchianeri by a decision in six rounds. Cerdan then ran a streak of 47 wins in a row between that first bout and 1939, when he lost for the first time, to Harry Craster by a disqualification in five rounds in London.

Cerdan campaigned heavily in the French territories of Algeria and Morocco during that part of his career, as well as in metropolitan France, his parents' place of birth. In 1938, he beat Omar Kouidri in a 12-round decision at Casablanca to claim the French welterweight title.

After his first loss, Cerdan recorded five consecutive wins, which led him to challenge Saviello Turiello for Europe's welterweight title in Milan, Italy. He won the European title by a decision in 15 rounds to continue his ascent towards the championship. Cerdan's winning streak eventually reached 23 bouts before he suffered a defeat to Victor Buttin by disqualification in eight rounds in Algiers.

In 1944 he joined the American allies in World War II, and he won the Inter-Allied Championship. He also went up in weight to the Middleweight division, and won the French title by beating Assane Douf by a knockout in three rounds. He later claimed the vacant European title by beating Léon Foquet by a knockout in one round. He retained that title a couple of times before losing it to Cyrille Delannoit by a decision in 15 at Brussels, Belgium.

Soon, he went back to Belgium and re-took the title by beating Delannoit, also by decision. Finally, after the rematch with Delannoit, Cerdan was given a world title opportunity and he travelled to the United States, where he beat world Middleweight champion Tony Zale. Cerdan became a world champion by knocking Zale out in the 12th round in Roosevelt Stadium, New Jersey in 1948. 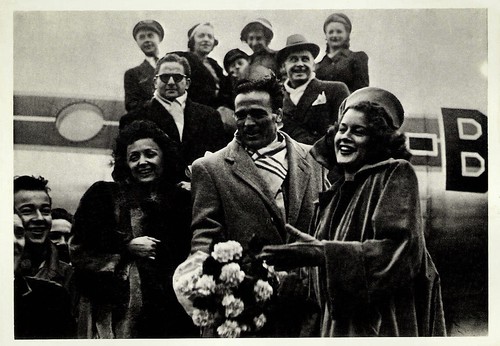 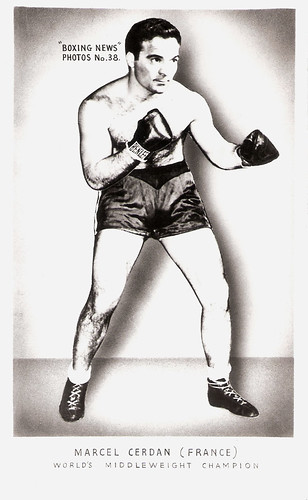 
During his short period as a world champion, Marcel Cerdan became a popular figure of the Paris scene. Although married with three children, he had an affair with the famous singer Édith Piaf. The affair lasted from summer 1948 until his death in autumn 1949. They were very devoted to each other and Piaf wrote one of her most famous songs, Hymne à l'amour, for Cerdan.

He also appeared in two films. He was himself in the French film L'homme aux mains d'argile/The man with the hands of clay (Léon Mathot, 1949) with Blanchette Brunoy, and he played a boxer in the Italian comedy Al diavolo la celebrità/A Night of Fame (Mario Monicelli, Steno, 1951) with Mischa Auer.

For his first defense Cerdan returned to the United States, where he fought Jake LaMotta in Detroit. Cerdan was knocked down in round one, his shoulder was dislocated, and he had to give up after the tenth round. It would be the last fight of Cerdan's life.

A contract was signed for a rematch and Cerdan went to training camp for it, but before camp began he boarded an Air France flight to visit Piaf in New York, where she was singing. The Lockheed L-749 Constellation crashed into Pico da Vara (São Miguel Island, Azores), killing all 11 crew members and 37 passengers on board, including Cerdan and the famous French violinist Ginette Neveu, while approaching the intermediate stop airport at Santa Maria. Cerdan was only 33.

Marcel Cerdan's record was 113 wins and 4 losses, with 66 wins by knockout. In 1983, Cerdan and Piaf had their lives turned into a big screen biography. The film, Édith et Marcel (Claude Lelouch, 1983), starred Marcel Cerdan, Jr. in the role of his father and Évelyne Bouix as Piaf. In 2007 he was portrayed by Jean-Pierre Martins in La Môme/La Vie en Rose (Olivier Dahan, 2007). 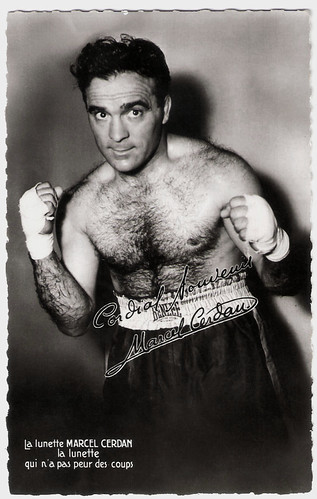