Tomorrow, 27 May 2017, EYE Filmmuseum Amsterdam organises a Collection Day. EYE curators explain how film history comes alive through the use of new technologies and various presentation possibilities, based on films from the collection. The first film of the programme is the British-Dutch detective film Bloedgeld/Blood Money (Fred Goodwins, 1921). Star is the Chilean actor Adelqui Migliar aka Adelqui Millar (1891-1956). He was the Latin Lover of the Dutch silent cinema in the 1910s and early 1920s, but he also starred in the Austrian epic Die Sklavenkönigin/Moon of Israel (1924) by Michael Curtiz, and many other European silent films. Later on he acted and directed in Argentine. 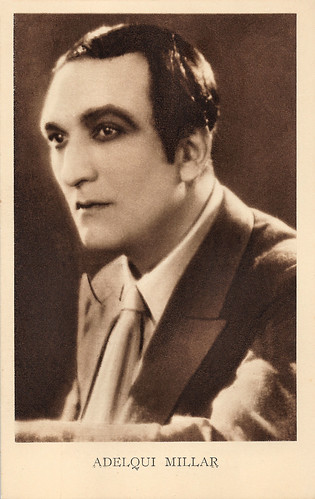 Adelqui Migliar Icardi was born in Concepción, Chile in 1891. His father was Chilean, his mother Italian. He had a happy youth on the farm of his parents and enjoyed playing cowboy. When he was 14 his father sent him to Italy to attend high-school.

At his return to Chile, Migliar had a diploma in commercial science, but didn’t know what to do with it. So he joined a touring theatre group and for one year he travelled all around Latin America until he reached California. There he started his film career as an extra, which earned more money than his stage acting.

According to Caroline Hanotte at CinéArtistes, he worked as a double and as a stuntman. he performed the stunts, which were considered too dangerous for the stars. It seems he even worked on some films as an – uncredited - assistant-director.

Dutch film historian Geoffrey Donaldson wrote in 1991 in the Italian film magazine Immagine that Migliar worked at Vitagraph, where his parts slowly became bigger. At the end of 1913 he returned to Italy and found work in Turin as an actor for the companies Pasquali and Gloria, though unknown is in which films.

When Italy joined the Allies in the First World War in 1915, Migliar left Italy and went to the neutral Netherlands, where Theo Frenkel senior offered him to play the protagonist in his film Genie tegen Geweld/Genius against Violence (1916), produced by Frenkel’s own company Amsterdam Film.

In those years the Dutch were in dire need of male young actors, as many young Dutchmen were serving in the army. Migliar played Pim Brice, a courageous detective who pursues a gang of jewel thieves, when the daughter of an innocent suspect asks him to catch the real thieves. The film strangely starts with a large nonfiction part on a jewelry factory.

After the theft we notice Migliar using all means of transport and performing dangerous stunts such as escaping lions and jumping on a riding train, until he is able to catch the thieves. Apparently his experience as stuntman in the States paid off. Unfortunately the remaining print of the film is incomplete, but it can be viewed on the site Film in Nederland. 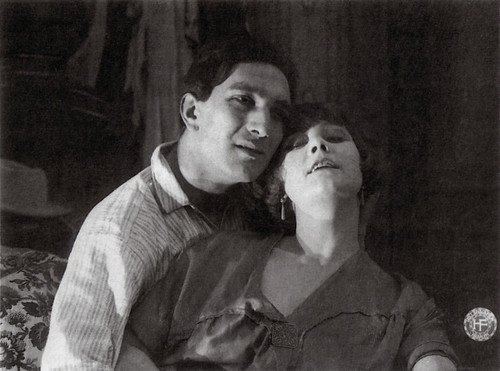 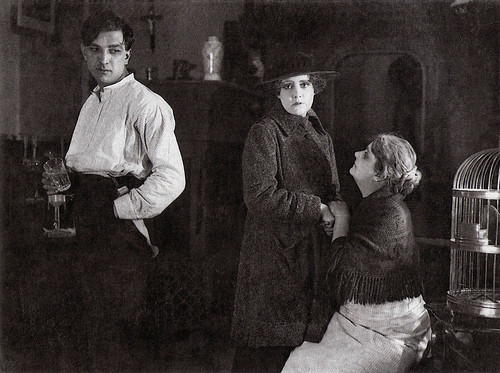 The Latin Lover of Hollandia

In the Netherlands, Adelqui Migliar was a huge success, and he became the Latin Lover of Dutch silent cinema. First he played a violin player in Danstragedie/Dance Tragedy (Johan Gildemeyer, 1916), who despairs after his wife (Meina Irwen) leaves him.

In 1917 he signed a contract with the Hollandia film company of producer and director Maurits Binger and for the next five years he appeared in 23 Hollandia pictures. Already in his first film for Hollandia, Madame Pinkette & Co./The Girl Who Saved his Honour (Maurits H. Binger, 1917), he co-starred with the diva of the Dutch silent film, Annie Bos.

Once the First World War was finished, Binger struck a deal with the British distributor and producer A.G. Granger and they founded the Granger-Binger or Anglo-Hollandia company. Binger co-directed the films with the British director B.E. Doxat-Pratt. Many Dutch actors, including Annie Bos, lost prominence and were replaced by British actors, but Migliar kept his position.

His name was only changed in Adelqui Millar, a name he kept until his return to South America. At Hollandia, Migliar not only played heroes or lovers. He was also the grandfather of the protagonist in the melodrama Zooals ik ben/As I Am (Maurits H. Binger, Bernard Edwin Doxat-Pratt, 1920), while he played the sinister Henk Duif in Schakels/Chains (Maurits H. Binger, 1919), the film adaptation of Herman Heijermans’ noted stage play.

Probably Millar’s best films in those years were Een lach en een traan/Laughter and Tears (1921) and Circus Jim (1921), films Millar both co-scripted, while he was co-director of Circus Jim as well. IMDb erroneously equals Circus Jim with Laughter and Tears. Laughter and Tears deals about a poor Venetian painter. He dumps his girl Pierrette (played by American actress Evelyn Brent) for a fancy lady when he has his artistic breakthrough.

Pierrette doesn’t give up and follows him to Paris, they fight and he thinks he killed her. Cast and crew moved to Venice and Paris for location shooting. The investments paid back, when the film became an international success. It also meant a ticket for Millar’s international career. 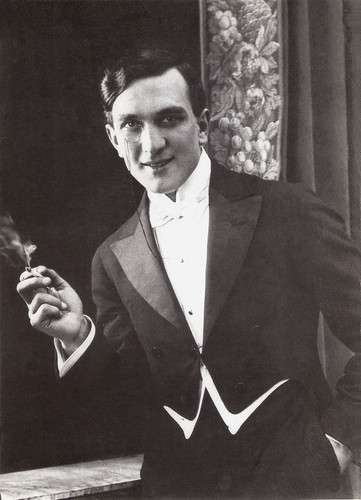 Late 1921, Adelqui Millar moved to Britain, where he founded his own company and scripted, produced, directed and interpreted Pages of Life (1922), with again the beautiful Evelyn Brent. This was followed by I Pagliacci (G.B. Samuelson, S.W. Smith, 1925), where he was Canio opposite Lilian Hall-Davis as Nedda, and London (Herbert Wilcox, 1926), with Dorothy Gish.

His next film, The Arab (1924), was shot partly in France and Algeria by the American film director Rex Ingram, who was active in Nice then. Millar played the father of another Latin Lover: Ramon Novarro.

For his part of Prince Seti opposite Maria Corda’s in Die Sklavenkönigin/Moon of Israel (1924) by Mihaly Kertesz aka Michael Curtiz, Millar moved to Austria.

He returned to Britain and directed himself and Mona Maris in The Apache (1925). Then he had the male lead in the French film Le navire aveugle/The Blind Ship (Giuseppe Guarino, 1927) with Colette Darfeuil, and directed the Albatros production Souris d’hôtel/Hotel Thief (1928) with Elmire Vautier and Ica von Lenkeffy.

Late 1927, Millar founded a new company in London, Whitehall, for which he was president. He ambitiously planned to produce six low budget films. He directed and interpreted the first one in Spain: Life (1928). In the second, The Inseparables (1929), he left the lead to Patrick Aherne and stuck to directing only, with John Stafford. When the films were ready to be released, however, Whitehall got in trouble, and in 1929 Millar was discharged and his contract annulled.

The affair was widely described by noted British film historian Rachel Low. However, according to Geoffrey Donaldson, she was quite prejudiced in her negative judgement of Millar’s acting, as in her time only one print of Millar's films was available. 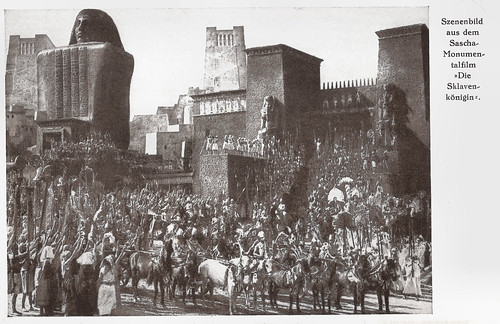 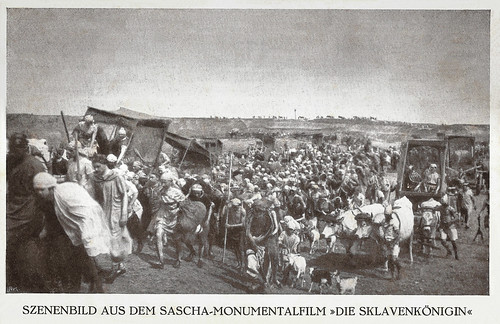 Adelqui Millar’s career was saved when the talkies arrived and Paramount decided to open a sound film studio near Paris at Joinville-le-Pont. He was hired for six Spanish versions of American films for the Spanish and Latin American market. He also shot the French version of George Cukor’s The Virtuous Sin, entitled Le rebelle/The Rebel (1931), with Suzy Vernon.

Millar’s last film at Joinville was Las Luces de Buenos Aires/The Lights of Buenos Aires (1931), based on an original script and only shot in Spanish. Protagonist was the popular Argentine singer Carlos Gardel. The film had a vast success everywhere in South America and was projected in New York as well.

In the 1930s Millar continued his surely tiresome wandering life. In 1934 he shot in Italy Luci sommerse/Dimmed Lights with Fosco Giachetti, while the project of a second Italian film failed.

The outbreak of the Spanish civil war spoiled another project in Spain, so Millar accepted a proposal of the Argentine producer Alfredo de Murua to come over to Buenos Aires. While the Argentine film industry could well have benefited from Millar’s (now Migliar again) experience, the opposite happened.

While Migliar could continue to work in Buenos Aires until 1954, nothing really grand came out of it and his work remained on a provincial level. His first film Ambición/Ambition (1939) was based on the script of his earlier Dutch silent film Laughter and tears.

The same year Millar made La carga de los valientes/Only the Valiant (released 1940), in which the 19-years-old Eva Duarte made her debut. Duarte would become famous as Evita Peron.

In the 1940s and 1950s Migliar directed seven films such as Tormenta en el alma/Soul Storm (1946), his only Chilean film, which elsewhere was released as El precio de una vida/The price of a life (1947). The film was after Victorien Sardou’s Fedora, with Mecha Ortiz as princess Fedora and Emilio Gaete as the nihilist who loves her.

Adelqui Miliar's film Bloedgeld/Blood Money (Fred Goodwins, 1920) was considered as missing until recently when bits and pieces were discovered in the EYE archives.

Part of the recently found material was in such a bad state (the nitrate film became sticky) that, once identified, it had to be sent to the laboratory immediately. Various parts of the film could only be viewed in the movie lab after the treatment and placed in the correct order.

The result was a nearly complete version, although a few short but important scenes are still missing. The collected material provides clues about how the film was released in its own day.

This has made it possible to restore and present the film in various ways: for instance as a purely historical document, or in a newly edited and completed version that can be better appreciated by contemporary audiences.

The presentation tomorrow at 11:30 is by Elif Rongen-Kaynakçi, EYE's silent Film curator, and film restorer Annike Kross. Admission is free.