German actress Margit Saad (1929) was a mysterious, exotic beauty, who worked largely in German film and television. During the 1960s, she also made occasional English-language appearances. 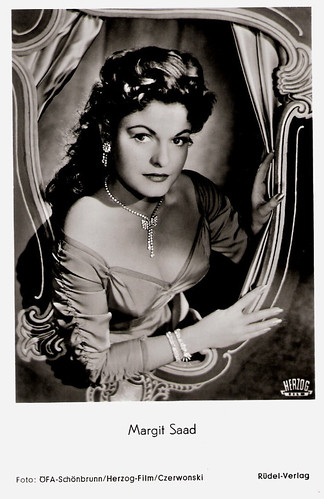 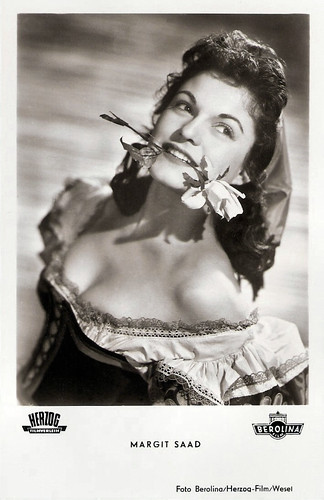 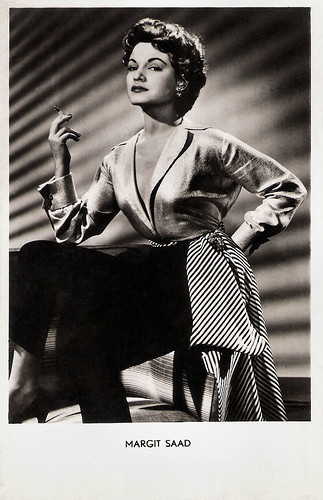 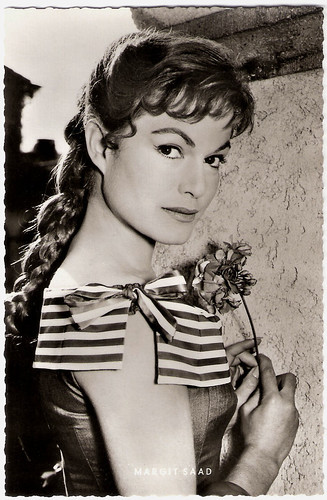 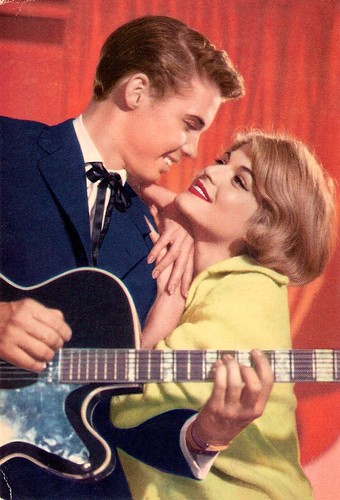 Daughter of a Lebanese language professor


Margit Daisy Saad was born in Munich, Bavaria in 1929. She is the daughter of the Lebanese language professor Fuad Jabbour Saad and German language teacher Agnes Saad, born Diepgen.

Margit studied acting at the Otto-Falckenberg-Schule in Munich. To finance her studies, she worked as a model. She had her first stage engagement in Düsseldorf.

In the Swedish-German coproduction Sommarflickan/Swedish Girl (Håkan Bergström, Thomas Engel, 1955), she had a part opposite Maj-Britt Nilsson and .Karlheinz Böhm A popular success was the West German crime-comedy Peter Voss, der Millionendieb/Peter Voss, Thief of Millions (Wolfgang Becker, 1958) featuring O.W. Fischer. It was based on the 1913 novel Peter Voss, Thief of Millions by Ewald Gerhard Seeliger, which had been previously adapted into three films.

In France, she appeared in Les dragueurs/The Dredgers (Jean-Pierre Mocky, 1959). Other films that year were Heiße Ware/Hot goods (Paul May, 1959) with Ivan Desny, and the teen musical Melodie und Rhythmus/Melody and Rhythms (John Olden, 1959) with teen idol Peter Kraus. 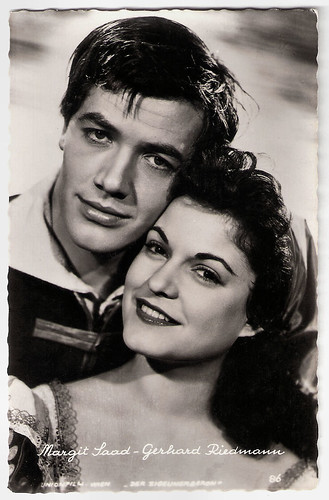 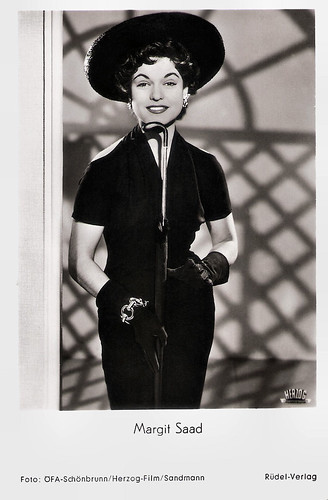 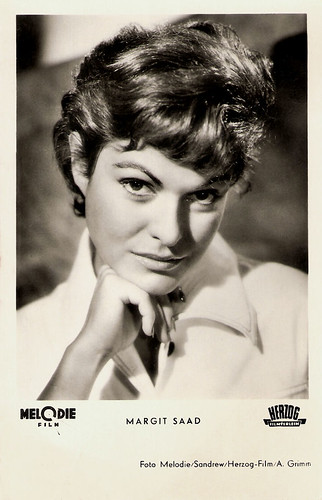 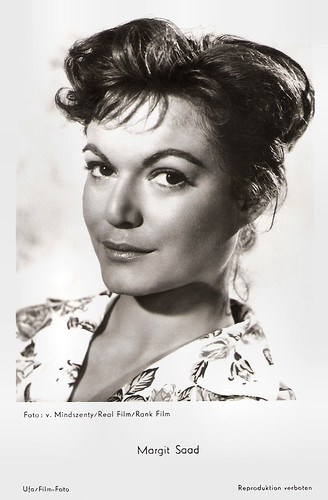 
In 1960 Margit Saad starred in the British drama The Criminal (Joseph Losey, 1960) with Stanley Baker and Sam Wanamaker.

Mario Gauci at IMDb: “While essentially character-driven, the film's seedy milieu and sadistic streak allows for a number of vivid sequences (though the race-track robbery itself is rather thrown away!) including the wild party held at Baker's flat on being released from prison (highlighting sexy Margit Saad who subsequently replaces Jill Bennett as Baker's moll), the equally chaotic prison riot, Baker's escape from the penitentiary (having been betrayed after the robbery and recaptured) and the inevitable showdown with the ruthless Wanamaker.”

She followed it up with appearances in other British films such as The Rebel (Robert Day, 1961) with Tony Hancock and George Sanders, and the low budget thriller Playback (Quentin Lawrence, 1962). The latter was one of a series of British films based on Edgar Wallace novels, released between 1960 and 1965.

On TV she appeared opposite Roger Moore in an episode of The Saint, The Saint Sees It Through (Robert S. Baker, 1964). And in the cinema, she supported TV comedians Eric Morecambe and Ernie Wise in The Magnificent Two (Cliff Owen, 1967).

In 1966, Saad appeared in an episode of the American television espionage series Blue Light, starring Robert Goulet and Christine Carère. It was edited together with three other episodes into the feature film I Deal in Danger (Walter Grauman, 1966), which includes her appearance.

Later she also appeared in Grauman’s war film The Last Escape (Walter Grauman, 1969) starring Stuart Whitman. It was her last film, but she continued to appear incidentally on German TV.

From 1957 till his death in 1988, Margit Saad was married to noted French opera director Jean-Pierre Ponnelle. They had one son, conductor Pierre-Dominique Ponnelle. 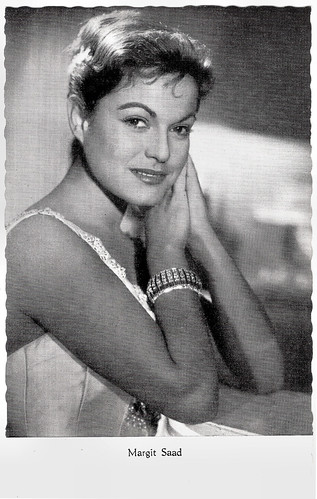 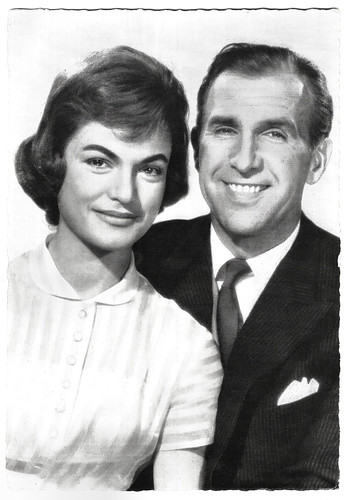 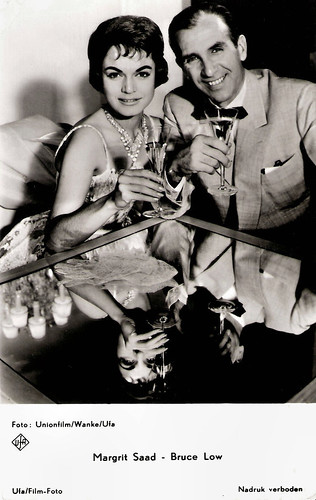 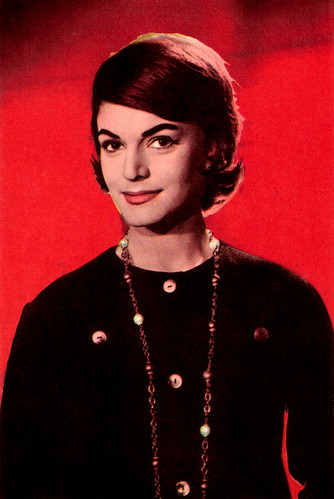 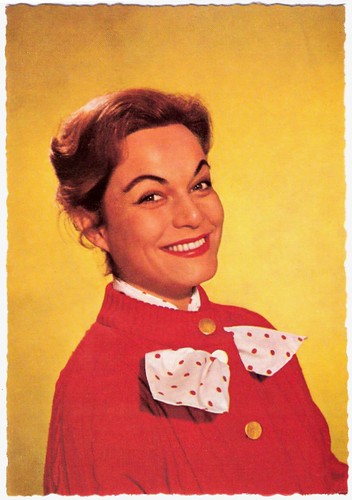