Today is the seventh day of the 2019 Netherlands Film Festival (NFF) in Utrecht. In our Unofficial Dutch Film Star Postcards Festival (UDFSPF), we present you Eduard Verkade (1878-1961). He was one of the actor-directors who revolutionised the Dutch theatre in the first decades of the 20th century. Verkade broke with the histrionics and the historic realism of the preceding period. As an actor he was especially renowned for his numerous solo-performances of 'Macbeth' and 'Hamlet'. He also starred in Dutch films of the 1910s, 1920s and the 1930s. 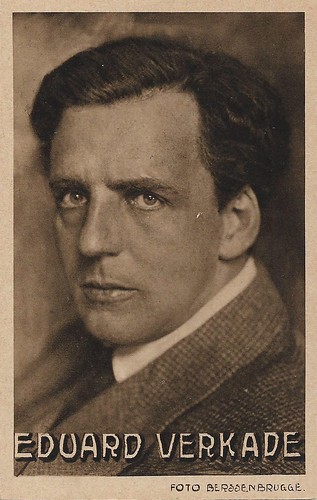 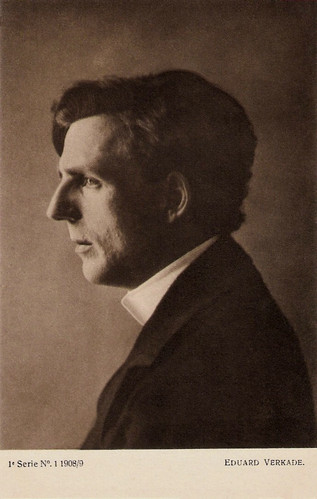 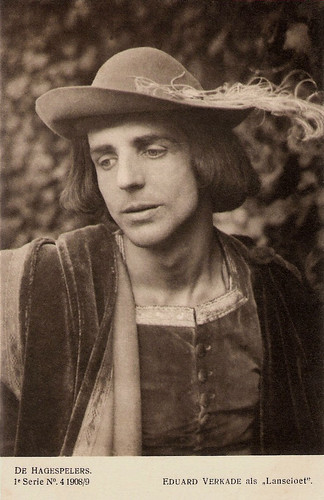 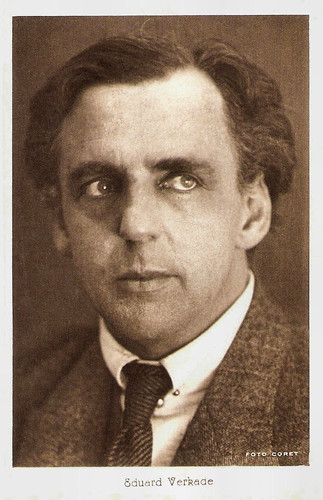 
Eduard Rutger Verkade was born in Amsterdam, the Netherlands in 1878.

He studied in 1894 at the Finsbury College near Londen. His studies were meant for a managerial job at his father’s famous biscuits and chocolate factory in the Netherlands, Verkade. In London he attended many theatre performances and in 1904 he decided for a stage career.

In 1908 he started his own theatre group, Die Haghespelers. This theatre company would exist till 1936 and staged a.o. William Shakespeare's 'Hamlet' and 'Macbeth', which would become the most famous roles of Eduard Verkade.

He also acted in classic plays by Joost van den Vondel, Maurice Maeterlinck, and in Fyodor Dostoyevsky’s 'The Brothers Karamazov'.

In the meantime he would work as the artistic director of numerous theatre companies and as a director he was an important innovator. In the 1930s he would also be the theatre critic for the prolific Dutch magazine De Groene Amsterdammer. 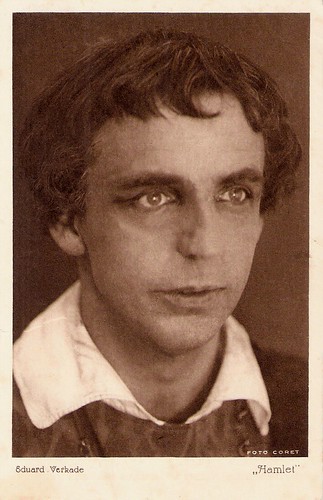 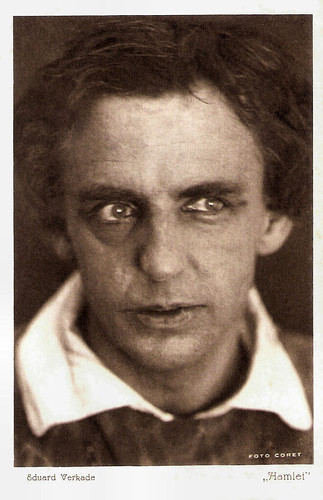 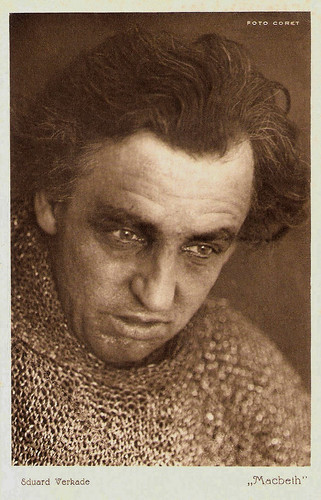 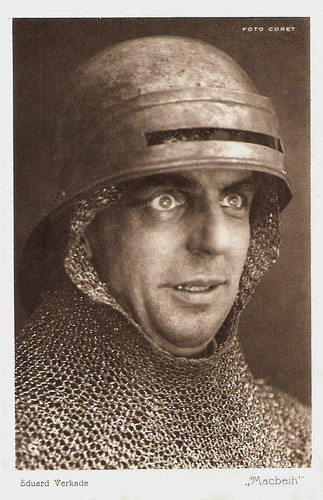 
Eduard Verkade starred in several Dutch films. In the silent film De duivel in Amsterdam/The Devil in Amsterdam (Theo Frenkel, 1919), based on the play Az ördög (The Devil, 1907) by Ferenc Molnár, he played the devil. His co-star was another legend of the Dutch stage, Louis Bouwmeester. Sadly, the film is considered as lost.

His biggest film hit was the Dutch film version of G.B. Shaw's Pygmalion (Ludwig Berger, 1937), in which he played the role of Pickering.

The star was Dutch diva Lily Bouwmeester, and soon he played in two more films with her: Veertig jaren/Forty Years (Edmond T. Gréville, 1938) and Ergens in Nederland/Somewhere in the Netherlands (Ludwig Berger, 1940).

In Ergens in Nederland/Somewhere in the Netherlands also appeared the author Jan de Hertog and the 'Dutch diva' Fien de la Mar. The film was just ready for release when the Netherlands were conquered by the Nazis, who forbade its exhibition. 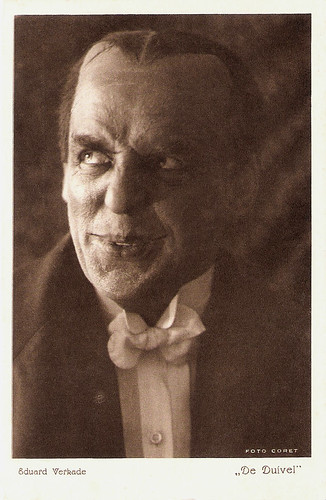 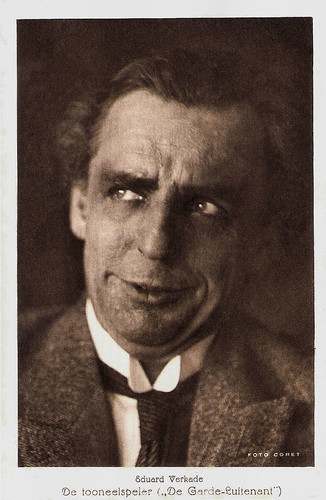 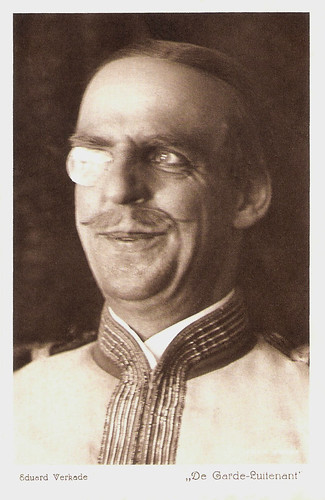 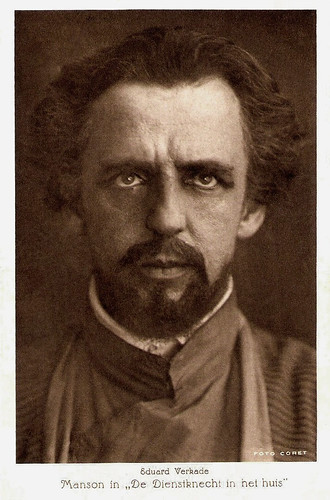 
During WW II, Eduard Verkade refused to join the Kulturkammer (the Nazi Ministry of Culture), which held under close scrutiny all artistic practices.

He was considered suspect because of his ‘dangerous’ pro-English sentiments. He saw in William Shakespeare's plays a powerful vehicle for anti-German - or, more generally, anti-war - protest.

He was also the organiser of many 'black evenings’ - clandestine theatre performances held at people's private homes, with the residents, their family and neighbours as the audience.

His house was a hiding place for many people, including the poet Adriaan Roland Holst. 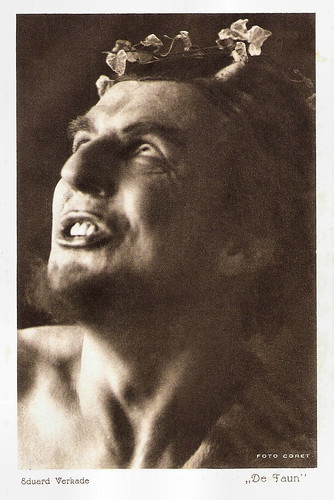 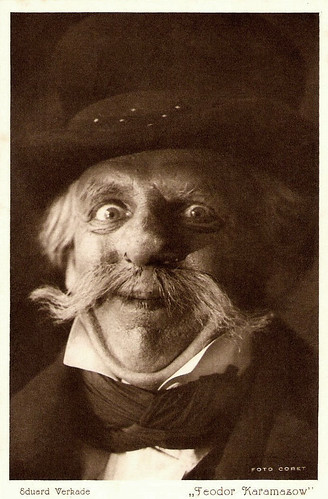 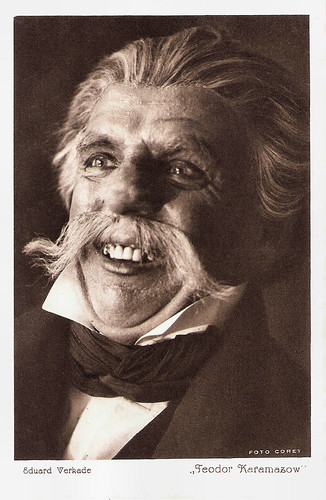