On 1 October 2019, Schlager singer and actor Karel Gott (1939-2019) passed away. He was the most successful male singer of the Czech Republic, and also had many successes in the German-speaking countries. He released more than 125 albums during his career, selling over 30 million records worldwide. In the annual national poll Český slavík, ‘the Sinatra of the East’ was thirty-eight times elected as the Most Favourite Male Singer. 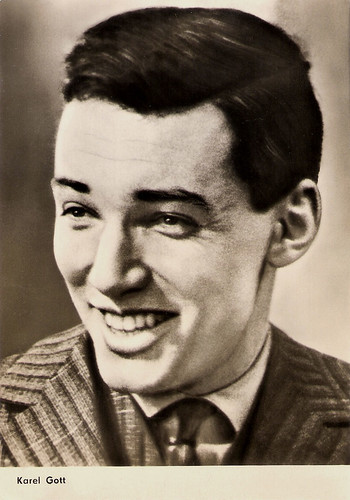 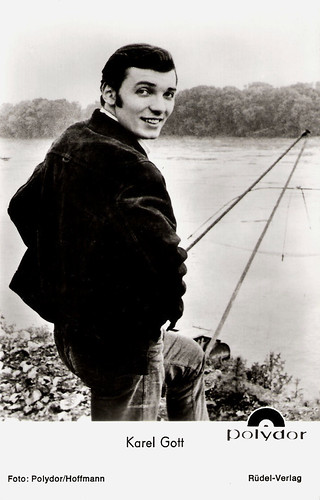 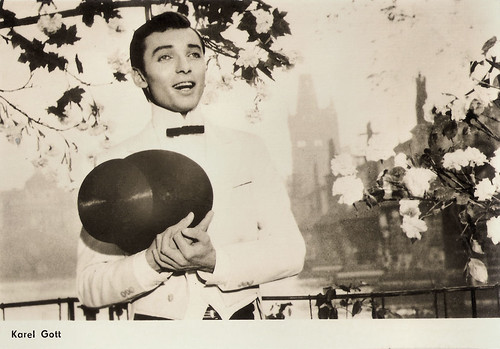 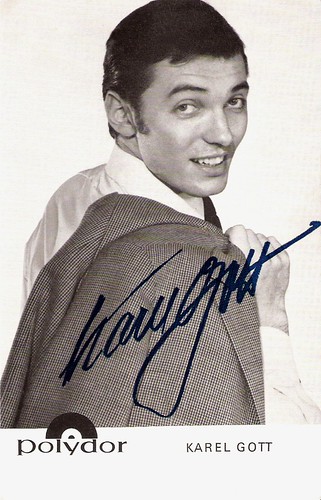 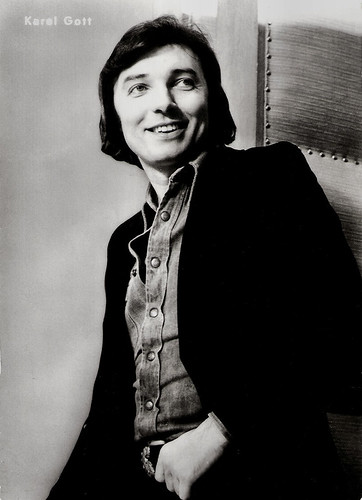 Karel Gott was born in 1939 in Pilsen, at that time Protectorate of Bohemia and Moravia, now Plzeň, Czech Republic, and has lived in Prague since age 6. He initially wanted to study art, but failed the exams at the School of Industrial Art, upon which he began training as an electrician.

On completing his studies, he began working as an electrician, but was soon fascinated by the new types of music flooding the city, and became interested in jazz. He experimented with playing the bass and the guitar, but eventually decided to focus on singing, studying it privately.

In 1958, he participated in the amateur singing contest Looking for New Talent in the Prague Slavonic House. He utterly failed to impress the judges, but soon made a name for himself in Prague jazz circles, finally getting his first engagement at the Vltava Prague Cafe that same year.

In 1960, he decided to undertake singing professionally. He studied opera at the Prague Conservatory under Konstantin Karenin, a student of the brilliant Russian bass Feodor Chaliapin. Knowing of Gott's interest in current musical trends, Karenin instructed him not only in classical Italian pieces, but also in the hits of the day. It was at this time that Gott travelled abroad (to Poland) for the first time with the Jazz Orchestra of the Czechoslovak Broadcast, conducted by Karel Krautgartner.

In 1962 or 1963 (the sources differ), Gott released his first single, Až nám bude dvakrát tolik (When we are twice as old), a duet with jazz singer Vlasta Průchová. Gott was voted into the Zlatý slavík (Golden Nightingale) viewer's survey, placing 49th and receiving a total of three votes.

His first solo single, Mesicni reka, the Czech version of Moon River became his breakthrough hit in 1962. In 1963 Gott was offered a place at the recently founded Prague Semafor theatre, which was then at the forefront of the emerging Czechoslovakian pop music scene. He released Oči sněhem zaváté (Eyes Covered by Snow), which became the year's best-selling record. Shortly afterwards, Gott received the first of his Zlatý slavík awards, given to the most popular artist of the year. 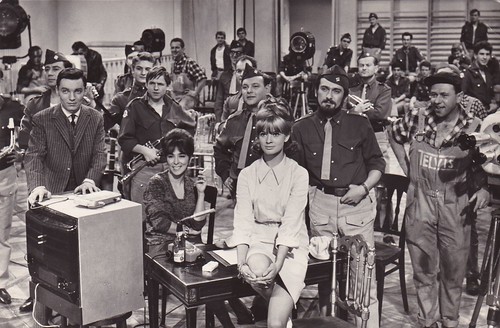 Carla: I suspect that on these two cards are the film crew making the documentary. With Jana Brejchova, Waldemar Matuska, Hana Hegerova, Eva Pilarova, Karel Gott, Jiri Suchy, and Jiri Slitr. They are all watching a television. In the public are soldiers who are holding music instruments. 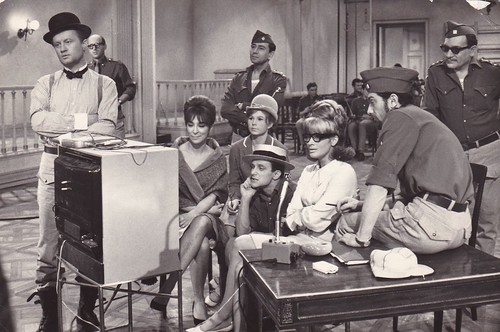 Carla: Kdyby tisic klarinetu/If a Thousand Clarinets (Ján Rohác, Vladimír Svitácek, 1965) is a fantasy musical film about a mysterious statue of the composer Johann Sebastian Bach that changes guns into musical instruments. The news spreads and a television station decides to make a documentary film about the subject. My guess is that it must be something like how music can change people. And, more particular, how soldiers change when they are not holding guns, but music instruments instead... But that is just a wild guess. 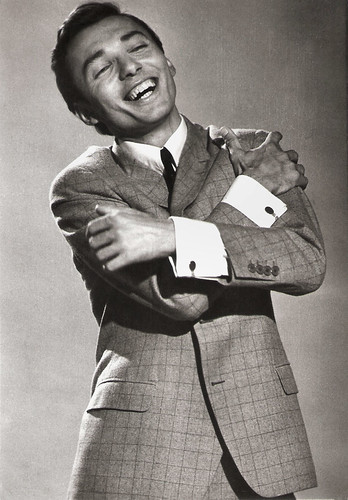 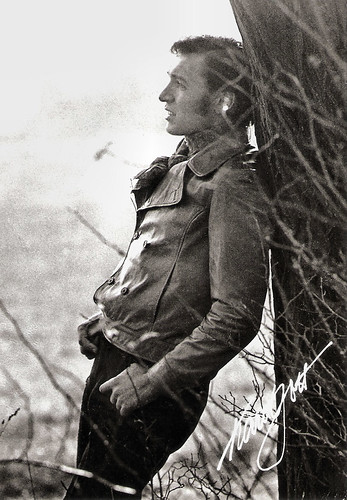 In 1965, Karel Gott was a major star, appearing in the programs Pilgrimage for Two and Evening Prayer while building his own repertoire with his own orchestra. That year, he made his first film appearance in the musical Kdyby tisíc klarinetu/If a Thousand Clarinets (Ján Rohác, Vladimír Svitácek, 1965) with Jana Brejchová.

He also established the Apollo theatre, along with two brothers who were with him in Semafor: Jiří and Ladislav Štaidl. He began composing his own songs, and toured Czechoslovakia and abroad with the Apollo theatre.

His first album, Karel Gott Sings got great acclaim. This first album was followed by an English export album titled The Golden Voice of Prague. In 1967, Gott performed at MIDEM, the International Fair of Record Companies and Music Producers in Cannes, France, where the applause was measured during every concert. He surprised everyone by achieving a level of 54 to Tom Jones' 58.

Following this event, Gott signed a contract with the Polydor / Deutsche Grammophon Gesellschaft record company, renewing it several times until it became a life contract in 1997. Between 1967 and 2000, Polydor released over 125 albums and 72 singles for Karel Gott in German speaking countries in Europe.

Gott represented Austria in the Eurovision Song Contest 1968 with the song Tausend Fenster, written by Udo Jürgens. He finished in 13th place. In the same year, Gott spent six months performing daily at the New Frontier Hotel and Casino in Las Vegas.

In the 1970s, domestic success was marked by Gott's presence on television, including the filming of a ten-part serial entitled Karel Gott in Slany. In 1971, after deciding not to return from a concert tour in West Germany to his home country, he was addressed a personal letter from the Czechoslovak party leader Gustav Husak persuading him to change his mind.

One of his most best-known pop hits was the title music to the Japanese anime series Maya the Honey Bee (1975). The original theme was composed by Karel Svoboda and sung by Karel Gott in the German, Czech and Slovak versions. In 1975 he also played the lead in the film musical Hvezda pada vzhuru/A Star Is Falling Upwards (Ladislav Rychman, 1975).

Karel Gott recorded a cover version of the song All by Myself called Kam tenkrát šel můj bratr Jan (Where Did My Brother Jan Go This Time). The song was dedicated to Jan Palach who set himself on fire and burned to death as a protest against Soviet occupation of Czechoslovakia in January 1969. According to Wikipedia, the song was recorded in 1977 while Soviet troops were still present in the country. In order to continue in his career, he had to sign in 1977 the so-called ‘Anti-charter’, a petition organised by the Communist government against the Charter 77 signed by Václav Havel and other dissidents, protesting the government's violations of the Helsinki Accords. 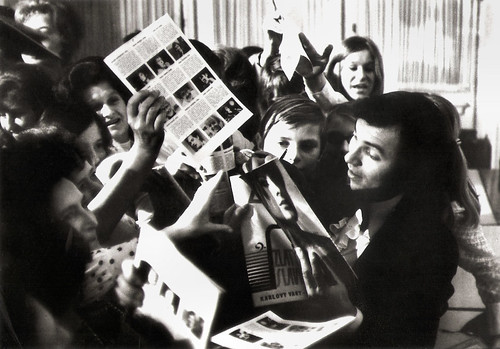 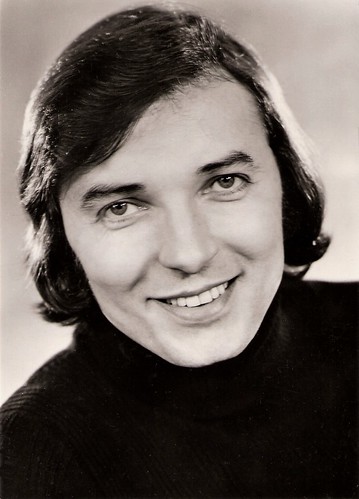 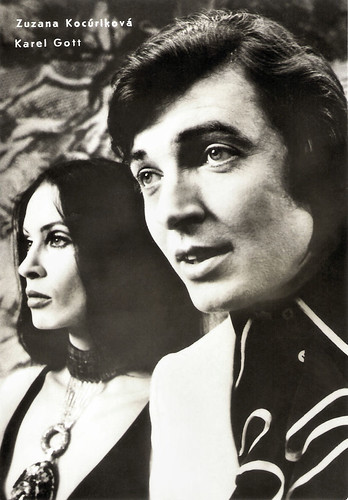 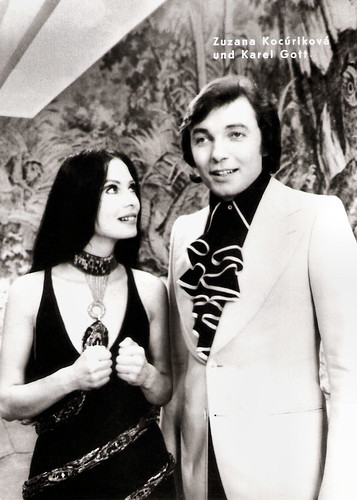 The 1980s were marked for Karel Gott by international success, including the filming in Italy of the musical In the Track of Bel Canto (1981), with a corresponding German-Italian album and duet performance with Sofia Rotaru in the Soviet Union. The following years, Gott received many awards, including The Supraphon Diamond Record Award, given him in 1992, for having sold 13 million records.

In 1990, he decided to end his career and arranged a huge farewell tour. However, the tour was so successful that he re-evaluated his decision. The 1990s were influenced by fundamental changes in the political system of the country, which were reflected in popular music, but it did not threaten his permanent position in the limelight of the domestic music scene. In 1991 a new television survey was created called TýTý. Karel Gott gained the first victory and at the same time became the outright winner of the survey.

In 1993, he established his own artistic agency, GOJA, with František Janeček. It is this agency that lately producedGott's records and organisedhis artistic activities. In 1996, following renewed public interest in his career, Gott again won 'The Golden Nightingale Award' with a huge lead over his rivals, and retained the accolade many times since.

Gott remained popular in a number of countries, including those of the former Soviet Union, where his first record, produced by Melodiya in 1977, sold a staggering 4.5 million copies. In 2000, he had his first concert in Carnegie Hall, New York.

During the 1990s, Gott began to focus increasingly on painting, his second great love. The first exhibition of his paintings took place in 1992, at the Prague Christ Child Gallery. He also exhibited his work successfully in Berlin, Moscow, Munich, Cologne, Vienna, and Bratislava.

In 2001, he played the double role of Lucifer and God in the family comedy Z pekla stestí 2/Goblins and Good Luck 2 (Zdenek Troska, 2001). He also acted regularly in TV series.

Gott had two adult daughters, Dominika and Lucie, from former relationships (they have different mothers). He was also the father to Charlotte Ella with Ivana Macháčková whom he married in 2008 in Las Vegas, the city where he started his international career. Their second daughter, Nelly Sofie, was born in summer 2008. Karel Gott passed away in Prague, Czech Republic, at the age of 80. 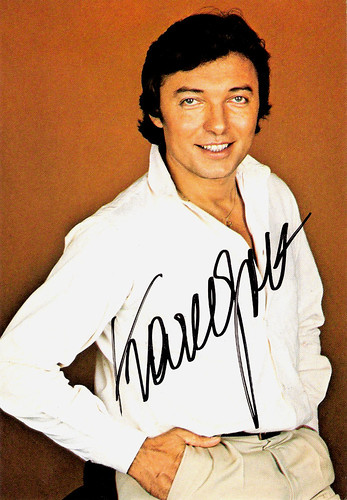 German promotion card by Polydor, no. 49. 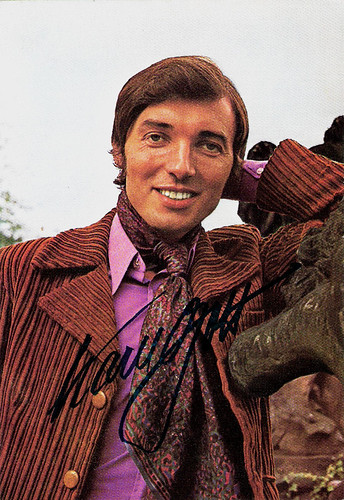