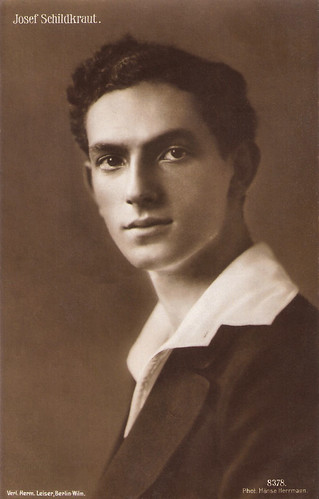 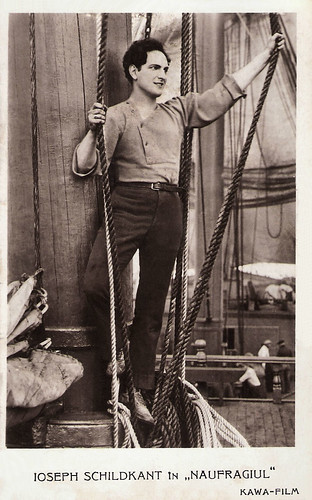 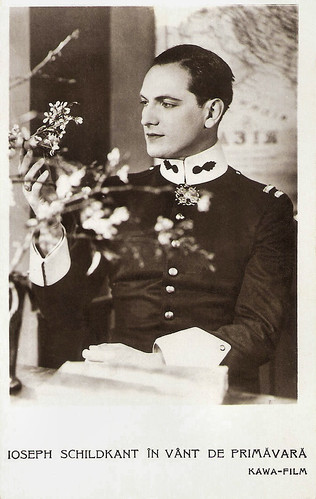 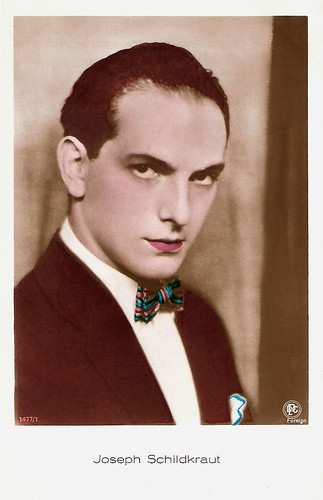 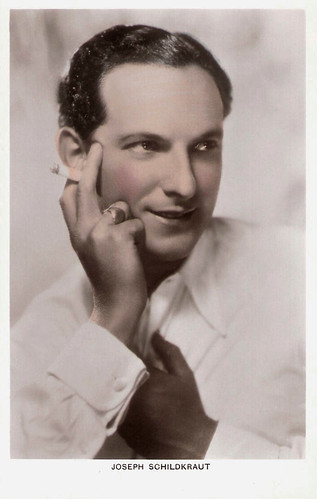 British postcard in the Colourgraph Series, London, no. C 92.


Joseph Schildkraut was born in Vienna, Austria-Hungary (now Austria), in 1896. He was the son of Erna (née Weinstein) and famed Yiddish stage actor Rudolph Schildkraut.

The family moved to Hamburg, Germany, when Joseph was 4. Joseph studied the piano and violin and grew inspired with his father's profession. On stage (with his father) from age 6, the family again relocated to Berlin where his father built a strong association with famed theatrical director Max Reinhardt.

Following Joseph's graduation from Berlin's Royal Academy of Music in 1911, the family migrated to America and settled in New York in 1912. His father continued making his mark in America's Yiddish theatre while Joseph was accepted into the American Academy of Dramatic Arts.

Gary Brumburgh at IMDb: "Offered lucrative theatre work back in Germany, Rudolf and family returned to Europe where Joseph began to grow in stature on the stage with the help of mentor Albert Bassermann. Joseph, like his father, would become well known not only for his prodigious talents on stage, but his marriage-threatening, Lothario-like behaviour off-stage."

Joseph made his stage debut in 1913, in Berlin, and started his film career in 1915 in the German feature films Dämon und Mensch/Demon and human (Richard Oswald, 1915) and Schlemihl (Richard Oswald, 1915) in which his father played the leading role. Roles followed in the films Das Wiegenlied/The Lullaby (Max Mack, 1916) with Aud Egede-Nissen and Leopoldine Konstantin, and Der Glücksschneider (Hans Otto, 1916) opposite his father.

Then the family Schildkraut emigrated to the USA. From 1920, Joseph appeared in Broadway productions. Among the plays that he starred in was a notable production of 'Peer Gynt'. In 1921, Schildkraut played the title role in the first American stage production of Ferenc Molnár's 'Liliom', the play that would eventually become the basis for Rodgers and Hammerstein's 'Carousel'.

He then began working in silent films, although he did return to the stage occasionally. He had immediate success as the Chevalier de Vaudrey in D. W. Griffith's classic Orphans of the Storm (1921) alongside sisters Lillian Gish and Dorothy Gish. It made him a matinee idol along the lines of Rudolph Valentino and Ramon Navarro.

Later, he was featured in Cecil B. DeMille's epics The Road to Yesterday (1925) and The King of Kings (1927), as Judas Iscariot. Schildkraut's father Rudolf also appeared in the film as the high priest Caiaphas.

Joseph Schildkraut also played a Viennese-accented, non-singing Gaylord Ravenal in the part-talkie film version of Edna Ferber's Show Boat (1929) opposite Laura La Plante as Magnolia. The character of Gaylord as written in the 1929 film was much closer to Ferber's original than to the depiction of him in the classic Kern and Hammerstein musical play based on the novel as well as the 1936 and 1951 film versions of the musical, but the 1929 film was not a critical or box-office success. 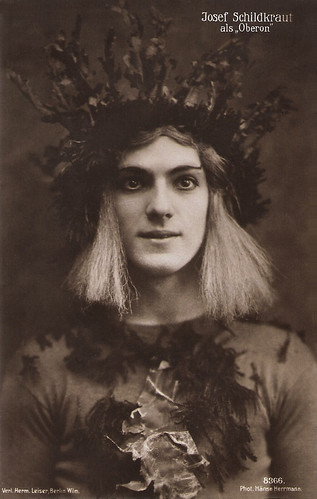 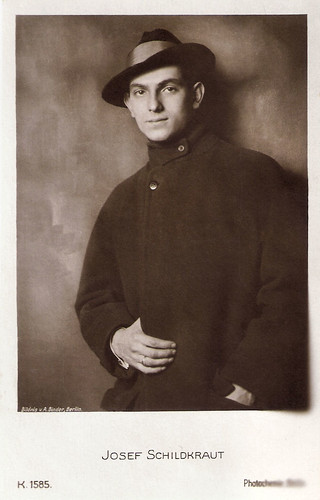 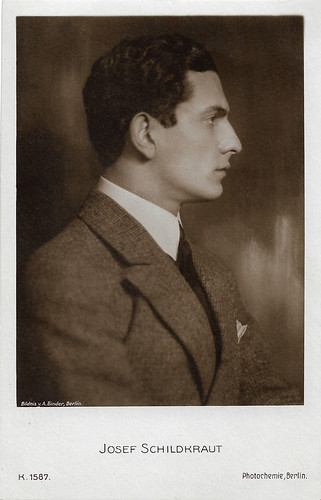 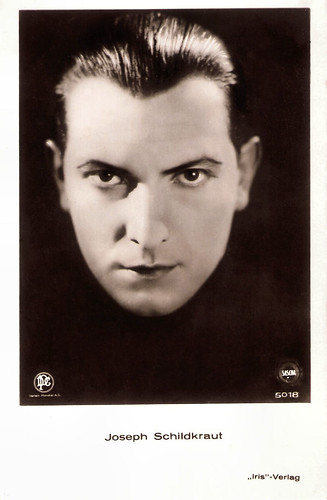 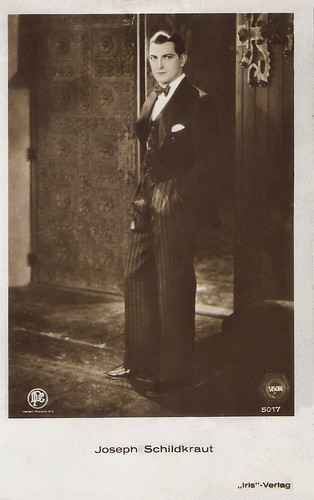 The Father of Anne Frank


Joseph Schildkraut's career peaked in the 1930s. Despite his preference for the theatre, Depression-era finances forced him to relocate to Los Angeles for more job security. He played Wallace Beery's nemesis, General Pascal in Viva Villa! (Jack Conway, 1934). In 1934 he also played King Herod alongside Claudette Colbert in Cleopatra (Cecil B. DeMille, 1934).

He received an Academy Award for Best Supporting Actor for his role as Alfred Dreyfus in The Life of Emile Zola (William Dieterle, 1937), in which he acted alongside Paul Muni and Gale Sondergaard. He gained further fame for playing the ambitious duc d'Orléans in the historical epic Marie Antoinette (WS Van Dyke, 1938), opposite Norma Shearer and Tyrone Power, and gave a notable performance as the villainous Nicolas Fouquet in the adventure film The Man in the Iron Mask (James Whale, 1939), featuring Louis Hayward.

His film output slowed down considerably at the outbreak of WWII in 1941. He continued to show vitality on the stage with notable successes in 'Clash by Night' (1941) with Tallulah Bankhead, 'Uncle Harry' (1942) and 'The Cherry Orchard' (1944) with Eva Le Gallienne.

Schildkraut is perhaps best remembered today for playing the role of Otto Frank, the Jewish father-in-hiding, in both the original stage production (in 1955) and film version of The Diary of Anne Frank (George Stevens, 1959), starring Millie Perkins.

His biography 'My Father and I' was published in 1959. Joseph Schildkraut was also an active character actor and appeared in guest roles on several early television shows, including the Hallmark Hall of Fame, in which he played Claudius in the 1953 television production of Hamlet, with Maurice Evans in the title role. Schildkraut also hosted and starred in Joseph Schildkraut Presents, a short-lived series on the DuMont Television Network from October 1953 to January 1954.

In 1961, during the 3rd season of The Twilight Zone, he made his first appearance on episode 9, 'Deaths-Head Revisited'. He later played an elderly man in 'The Trade-Ins' in season 3, episode 31 of the same show. In 1963, he was nominated for a Best Actor Emmy Award for his performance in a guest starring role on NBC's Sam Benedict legal drama which starred Edmond O'Brien and Richard Rust.

Schildkraut was married three times. His first marriage was to actress Elise Bartlett in 1923; they divorced in 1931. He married Mary McKay in 1932, until her death in 1962. In 1963, Schildkraut married Leonora Rogers, who survived him. In 1964, Schildkraut died at his home in New York City of a heart attack after a song-and-dance rehearsal for a musical comedy 'Cafe Crown,' which was due for a New York opening in the spring of 1964. He was 67. His father also died at the same age, also of a heart attack.

His last film role was Nicodemus in the epic failure The Greatest Story Ever Told (George Stevens, 1965). The film was released posthumously. For his contributions to the motion picture industry, Schildkraut has a star on the Hollywood Walk of Fame at 6780 Hollywood Boulevard. He is interred in the Hollywood Forever Cemetery. 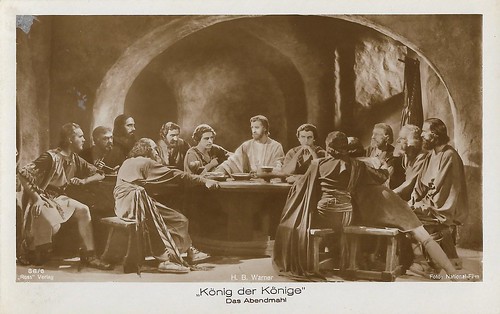 German postcard by Ross Verlag, no. 86/8. Photo: National Film. H.B. Warner as Jesus and at his right Joseph Schildkraut as Judas in The King of Kings (Cecil B. deMille, 1927). Caption: The Last Supper. 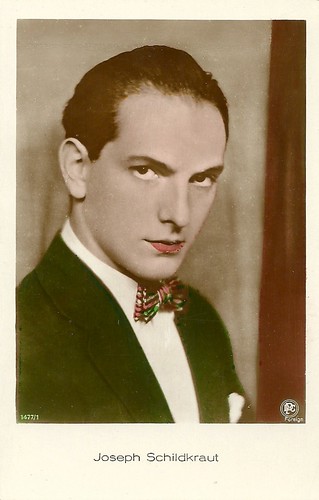 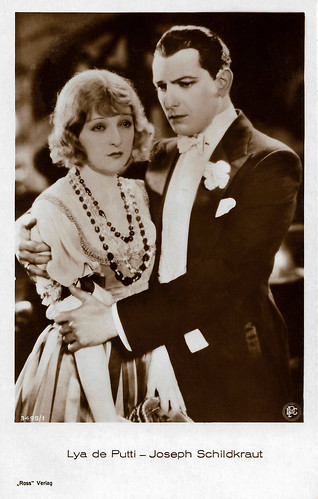 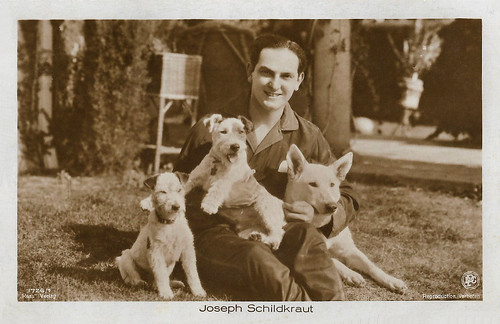 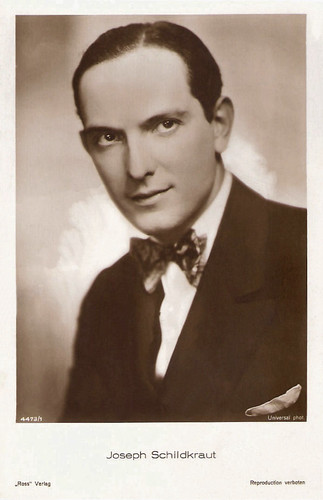 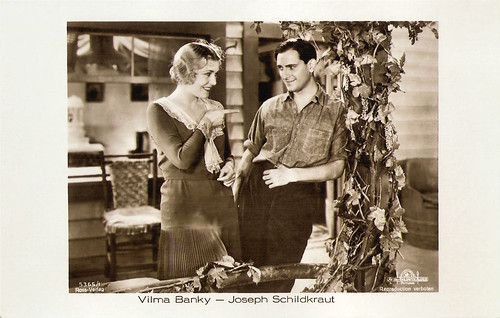 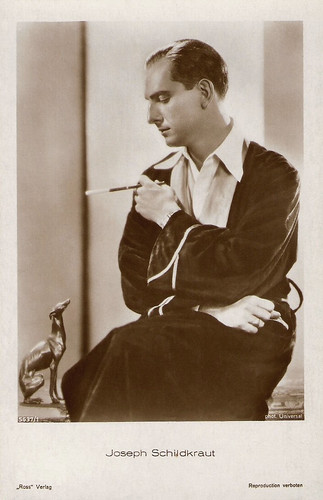