The name of Renée Adorée doesn’t immediately come to mind when you think of 'mystery girls' from the golden age of the movies. You wouldn’t rank her among the likes of Jetta Goudal or Merle Oberon who chose to reinvent their pasts for career purposes.
And yet… 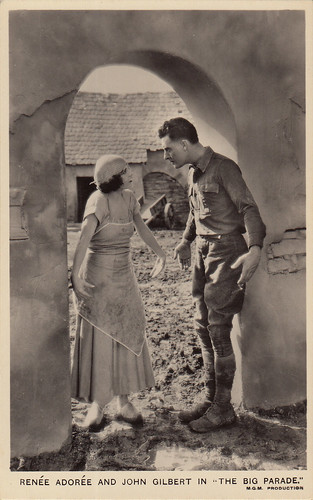 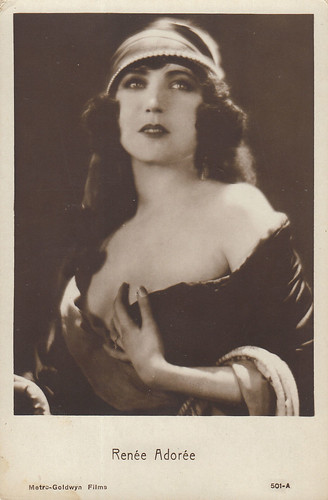 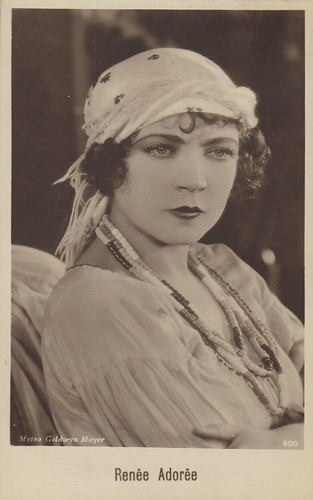 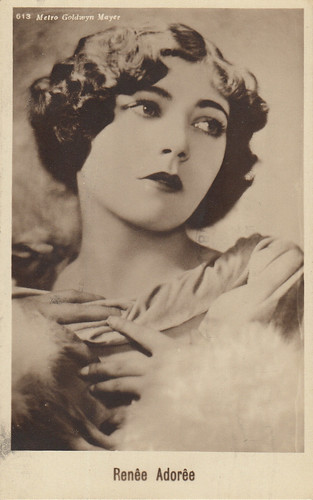 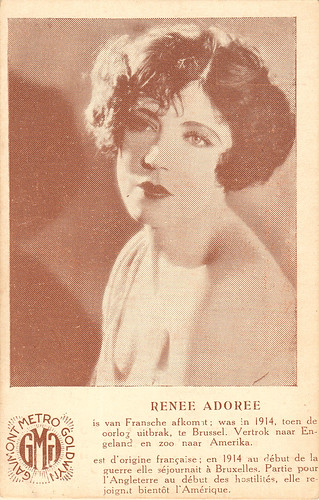 
For several decades, it was commonly assumed that Renée Adorée was French and that she was born as Jeanne (or Renée) de la Fonte in Lille (France) on the 30th of September 1898. That information is still available on websites such as IMDb, Wikipedia (English), Silent Hollywood, Golden Silents, Silents are Platinum, or Find a Grave.

But, of all this, only one thing is correct: Renée Adorée was indeed born on the 30th of September. All the rest is untrue. Research has proven crucial in this matter and, fortunately, some Internet sources have now begun to give a much more accurate version of the real story. I’ve also taken a keen interest in Renée Adorée’s life myself and I would like to share with you the results of my investigations.

According to the Altona births register, she was born as Emilia Louisa Victoria Reeves on the 30th of September 1897 in the Altona district of the city of Hamburg in Germany. According to her baptism certificate, her father was 'James Reeves' and her mother was 'Victorine Reeves, born Schreiber'. Let’s immediately set the record straight: Renée Adorée was not German. At the time of her birth, the principle and rules of “jus soli” did not apply in Germany. A child born from foreign parents in Germany was not considered German.

In fact, Renée Adorée herself, despite taking great care to hide her origins, gave a hint of the truth in her 1921 marriage license to Tom Moore by giving away her father’s family name: 'Reeves'. By doing so, she also, indirectly, admitted that her family name was also 'Reeves'. We don’t know what lead Renée to reveal a small part of the truth at the time. Maybe she reckoned that an official document should at least contain some true fact in it. Nevertheless, she could not restrain herself to alter her real parentage by claiming that her mother was someone called Marie de la Floente, born in Spain (!!!).

So, it may come as a shock to you but Renée Adorée, who became a symbol of France in Hollywood, was not French but was, in fact, British. As she had been born outside of England, the British nationality had been passed on to her through her father. That was called 'British by descent' in the British Nationality law. Children born in England were “British by birth”. Let’s note that the same 'British by descent' rules applied to Audrey Hepburn, who, having a British father, was officially British, although she had been born in Belgium and had a Dutch mother.

Just like her mother, Renée Adorée’s brother and sister passed away in England. Victor died in Southgate in 1967 and Mira died in London in 1979. Mira left a box of personal documents which is now preserved at the London Cinema Museum and contains, among other things, interesting photos of her famous sister and messages of condolence sent by many Hollywood personalities when Renée passed away in 1933. Among the documents, an especially moving piece can be found: A 23rd of November 1933 agreement to purchase the crypt no. 219 in the Hollywood Cemetery, which was made by Mira in relationship with the Los Angeles British consulate.

Several years ago, British film historian Tony Fletcher showed this box to Peter Reeves, Victor’s son and Renée Adorée’s nephew. In a way, the actress went back on that occasion to her British roots and family… I would like here to take the opportunity to wholeheartedly thank Tony Fletcher, who gave me interesting and helpful information about Renée and her family. 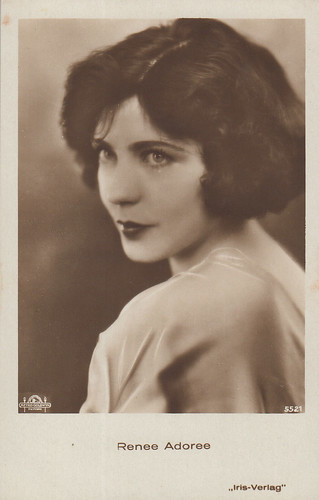 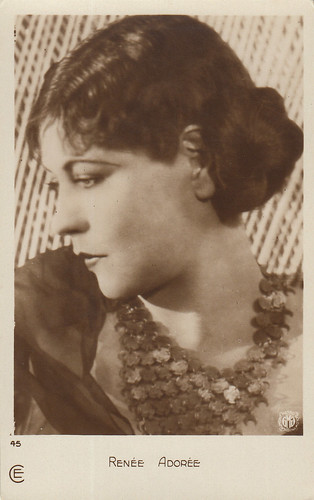 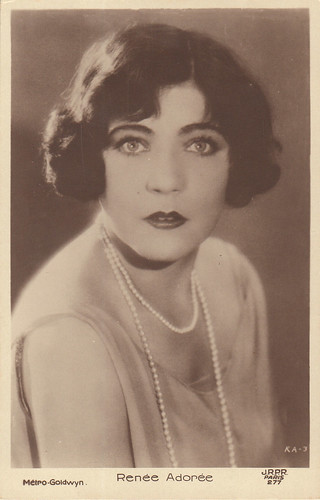 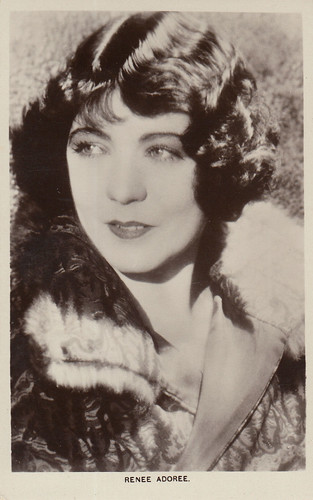 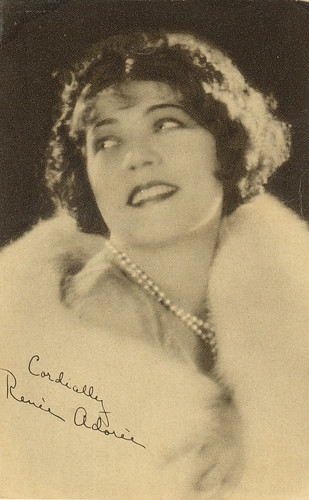 American card by Blatz Gum. This was part of a set of movie stars cards published in the second half of the 1920s to promote a chewing-gum brand. Collection: Marlene Pilaete.

The life and career of Renée Adorée


Renée Adorée was born Emilia Louisa Victoria Reeves on the 30th of September 1897 in Altona (Germany). Her father, James Reeves, born in London, was British and her mother, Victorine Schreiber, was born in Belgium. They were both circus artists. Renée Adorée had a brother, Victor, and a sister, Mira.

Some period sources claim that "she appeared at an early age as a daring horserider and classical dancer" and that “she studied modern dancing in England and was acknowledged to be an extraordinary graceful performer in London theatres”. We’ve also noticed mentions of a "legitimate stage debut in London" and of a stint in the chorus of the "Folies-Bergère" in Paris. This is just a sample of what can be found. A busy youth, to say the least...

There’s no doubt to have about Renée Adorée’s circus and show business background. However, it’s difficult to tell if all these facts about her younger days have to be taken for granted or if some of them have been embroidered, or maybe even invented, for publicity purposes by the actress herself or by journalists. For example, at the time of Renée’s death, her mother wanted to clear things up by declaring that the skillful equestrienne of the family was herself, not her daughter. We’ll let you judge.

James Reeves passed away in Sweden in 1913 and, at the outbreak of World War I, Victorine and her three children relocated to England. In 1918, the future Hollywood star was in Australia where, pretending to be French, she was praised by the critics and the public for her dancing skills. Her partner on stage was then American-born Guy Magley.

In an article entitled 'All Round Stage Artist' published in the Sydney Sunday Times on the 10th of February 1918, "Rene Magley, the beautiful Parisienne" (sic!) declared that she made her debut at the age of five and that "she cannot remember the time when any of her ancestors were not stage folks". The photo illustrating this article was captioned "Rene and Guy Magley, two delightful American-Parisianed dancers who were a big success in Samples, the revue which commenced at the Tivoli Theatre yesterday".

Another article was published on the 15th of March 1918 in The Arrow, in which she was still referred to as "Rene Magley" but, this time, the caption under the photo was: "Mrs. Renée Adorée and Mr. Guy Magley, two dancers who make their re-appearance at the Tivoli Theatre in Samples on Saturday". In July 1918, The Sydney Morning Herald mentioned, "Renee Adore (sic) and Guy Magley” at the Tivoli. On the 29th of October, the same newspaper published an article about the preview of the Australian movie £500 Reward featuring “Renee Adoree, the graceful partner in the Magley dances". And the 21st of December 1918 Evening Star evoked "Rene (sic) Adoree, the co-partner of Guy Magley on the Tivoli circuit".

£500 Reward (1918), directed by Claude Flemming, gave the first opportunity for audiences to judge her film potential, as a kidnapped heroine rescued by her beloved. So, at the end of her stay in Australia, she was clearly identified as 'Renée Adorée', although Australian newspapers sometimes seemed to have difficulties with the correct spelling of her pseudonym. From then on, she was going to be known under her new identity and to be faithful to her 'French' image. 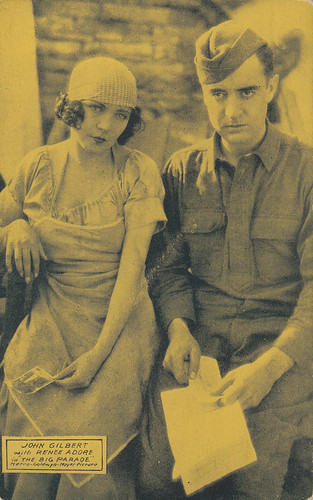 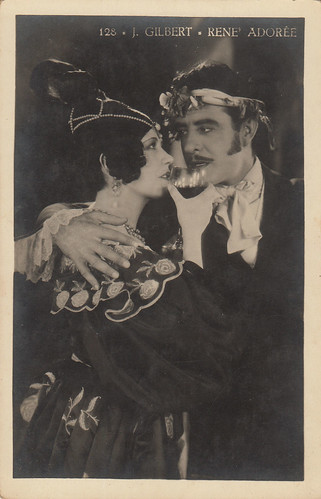 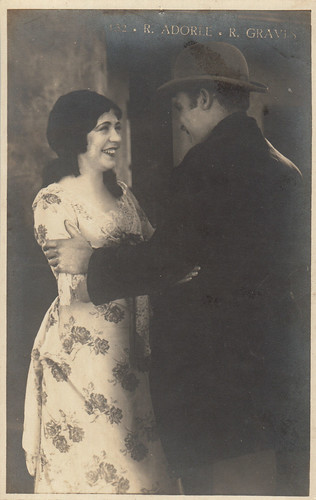 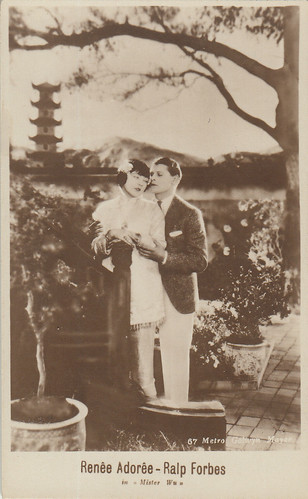 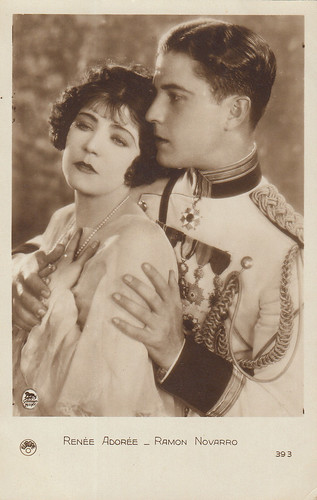 A hot property among Hollywood stars


In 1919, she was in the U.S.A. and notably appeared on Broadway in 'Oh, What a Girl' and 'The Dancer'. She then had the female lead in her first American movie, The Strongest (Raoul Walsh, 1920), based upon a story written by a famous French statesman, Georges Clémenceau.

Year after year, her popularity increased. She made three films with John Gilbert: Honor First (Jerome Storm, 1922), Monte Cristo (Emmett J. Flynn, 1922), and A Man’s Mate (Edmund Mortimer, 1924) and one, Made in Heaven (Victor Schertzinger, 1921), with Tom Moore, who was her husband from 1921 to 1924. She also had an especially well-received dramatic role in The Eternal Struggle (Reginald Barker, 1923).

In 1925, she rose to new heights by playing the charming and touching French peasant Melisande alongside John Gilbert in The Big Parade (King Vidor, 1925), which made her hot property among Hollywood stars. She continued to form a handsome cinematographic screen couple with John Gilbert in La Boheme (King Vidor, 1926), The Show (Tod Browning, 1927), and The Cossacks (George W. Hill, 1928).

Among her other films were The Flaming Forest (Reginald Barker, 1926), Back to God’s Country (Irvin Willat, 1927), The Mating Call (James Cruze, 1928), in which she had a nude swimming scene, and Tide of Empire (Allan Dwan, 1928). She had a second and brief marriage from 1927 to 1929 to William Sherman Gill, who was at the time the proprietor of a tailoring shop. Her first 100% talkie was Redemption (Fred Niblo, 1930), with John Gilbert for the last time. It was not a success.

Her last movie was Call of the Flesh (Charles Brabin, 1930), again co-starring Ramon Novarro. Renée Adorée was already seriously ill with tuberculosis during filming and, after she had finished all her scenes, she was rushed to a sanatorium, where she spent many months, hoping to recover. In 1932, she announced that she was cured and that she was ready to go back to work. Unfortunately, this was never going to happen. Tuberculosis had not said its last word and she passed away on the 5th of October 1933 in Tujunga, California. 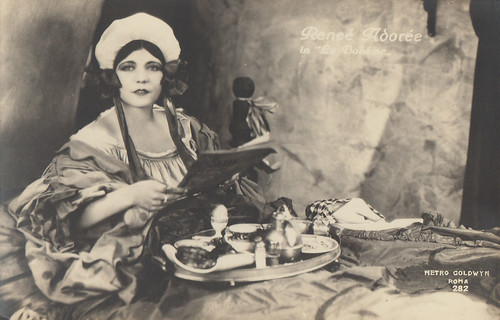 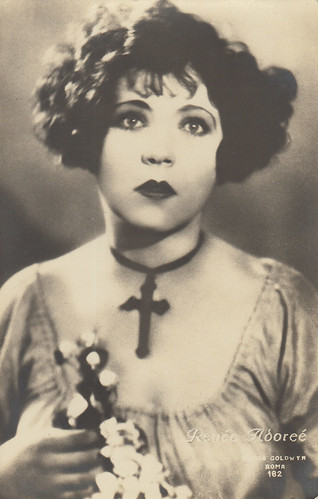 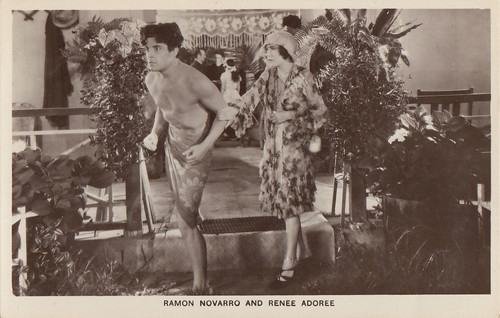 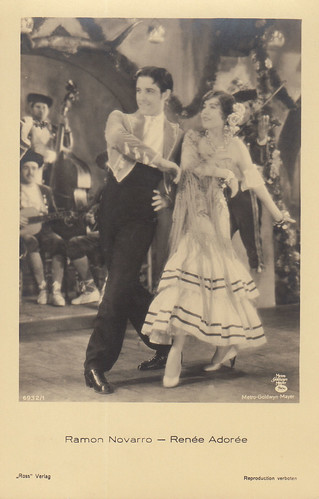 The creation of Renée Adorée’s image


Renée Adorée carefully hid the fact that she was born in Germany. We can easily understand why. Although she had never been German, she certainly didn’t want to be associated in any way with a country that, because of World War I, had become synonym with death, destruction, and cruelty.

She chose not only to forget about her place of birth but also erased her British roots for the creation of her new persona. It was in fact very clever of her. In Australia and in the U.S.A., being a British performer was not uncommon. Being French was another matter. It was exotic and immediately gave glamour and piquant charm to your personality.

So disappeared Emilia Reeves and so began the Renée Adorée / Jeanne-Renée de la Fonte legend. The choice of the pseudonym 'Renée Adorée' was a really good one. 'Renée' perfectly rhymes with 'Adorée', which means 'Adored'. What more can you ask in terms of euphony and evocative power?
Let’s note that she was not the only one to go the 'French way' at the time. Jetta Goudal, who was Dutch, and Fifi D’Orsay, who was Canadian, also pretended to be French during their careers.

Let’s pay homage to Renée Adorée’s talent and determination: what a notable achievement it was that, although not being French, she became one of the embodiments of French womanhood in Hollywood! 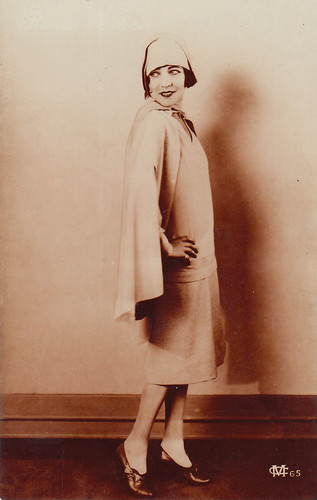