The Panthéon in Paris is the resting place for eminent personalities who have made the History of France such as Voltaire, Jean-Jacques Rousseau, Victor Hugo, Alexandre Dumas, Emile Zola, Jean Jaurès, Marie and Pierre Curie, Jean Moulin, André Malraux, Simone Veil, etc. Josephine Baker (1906-1975) enters the Panthéon today, 30 November 2021. She is the first Black woman and the first personality from the performing arts to have this honour. Josephine’s remains will stay in Monaco, where she is buried. So, homage will be paid to her in the form of a cenotaph with a plaque. Josephine Baker will be the sixth woman to be panthéonised, against seventy-five men. A great discrepancy, to say the least. The first was Sophie Berthelot in 1907, but she’s there only because her husband, scientist Pierre Berthelot didn’t want to be separated from her after death. The first woman to enter the Panthéon in view of her merits was Marie Curie in 1995. She was followed in 2015 by Resistance fighters Germaine Thillon and Geneviève de Gaulle-Anthonioz and, in 2018, by politician Simone Veil.

American-born Josephine Baker, who became a French citizen in 1937, was a great star but her achievements in show business are not the main reason for her Panthéonisation. She worked for French Resistance during the Second World War and was a tireless anti-racist activist. She was awarded the 'Médaille de la Résistance' in 1946 and received, by the hands of General Martial Valin, the 'Légion d’Honneur' and the 'Croix de Guerre avec Palme' in 1961. On 28 August 1963, she participated in the historic March on Washington and addressed the crowd. In August 2021, an official statement from the Presidency of the Republic called Josephine an 'embodiment of French spirit' and sang the praises of her: "Through her destiny, France honours an exceptional personality who chose eternal Enlightenment’s France, for the sake of her neverending fight for freedom and emancipation". 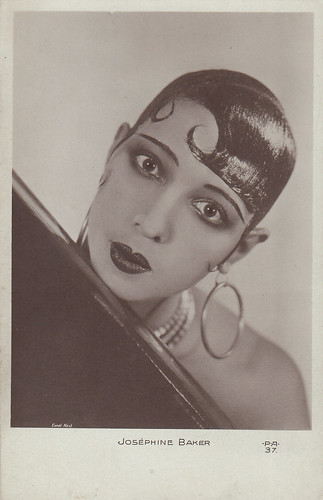 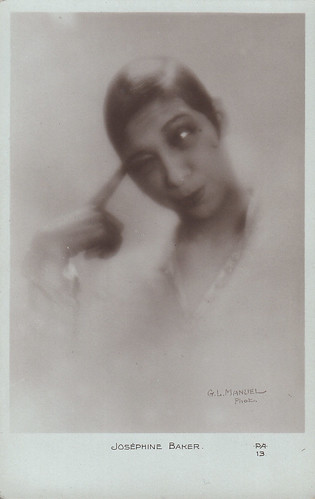 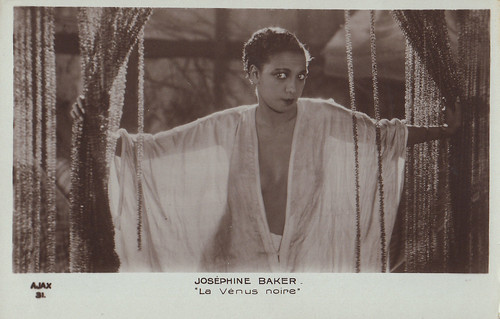 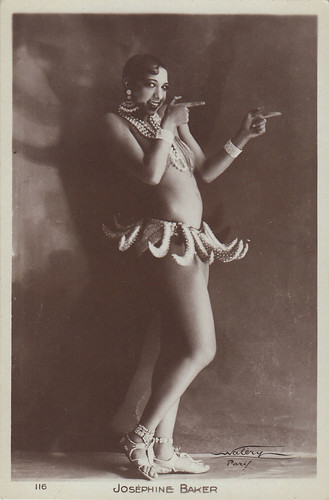 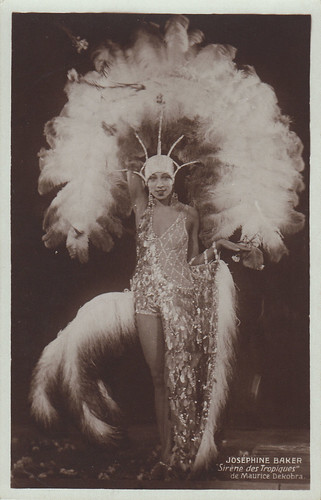 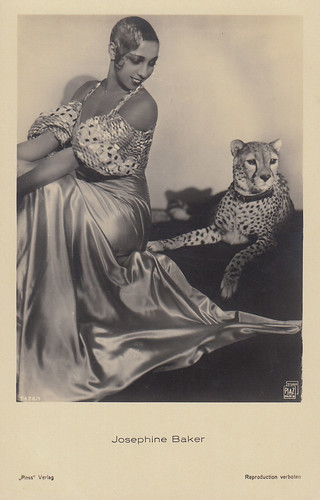 Her life and career


Josephine Baker was born Freda Josephine McDonald on the 3rd of June 1906 in St Louis, U.S.A.

Determined to escape poverty and menial jobs, she made her stage debut in 1920. In 1922, she was a chorus girl in a touring company of 'Shuffle Along', a musical that had opened in Broadway to much success in 1921. She began to be noticed and she continued touring with 'Shuffle Along' until the end of 1923.

She danced in the revue 'The Chocolate Dandies' on Broadway in 1924 and in 'Tan Town Topics' at the Plantation Club in Harlem in 1925.

Josephine Baker became a sensation in France when 'La revue nègre' premiered at the Théâtre des Champs-Elysées on the 2nd of October 1925. Half-naked, she performed a 'Danse sauvage' that left audiences speechless and she became the toast of Paris. Amazed by the lack of segregation and experiencing a freedom she never had in her native country, she decided to stay in France.

In 1926, she starred in the revue 'La folie du jour' at the Folies-Bergère and wore a banana belt, which would become her trademark. This was followed by 'Un vent de folie' in 1927.

The French film industry soon took notice of her success and she appeared as herself in La folie du jour (1927), La revue des revues (1927) and in the short Le pompier des Folies-Bergère (1928). She also played the title role in La sirène des Tropiques (1927). It was probably the first time that a black performer headlined the cast of a film that was not aimed at coloured audiences. 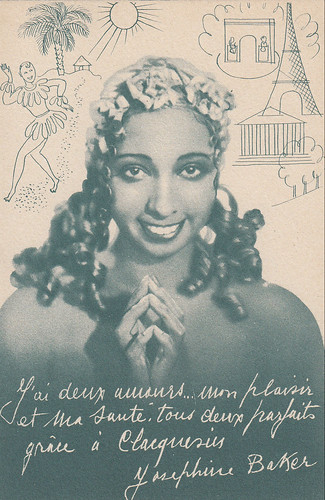 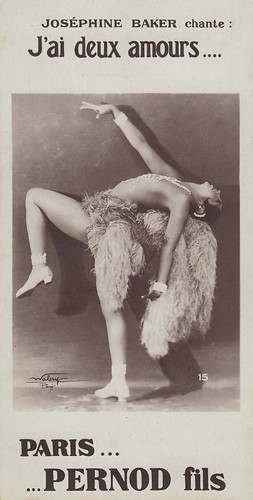 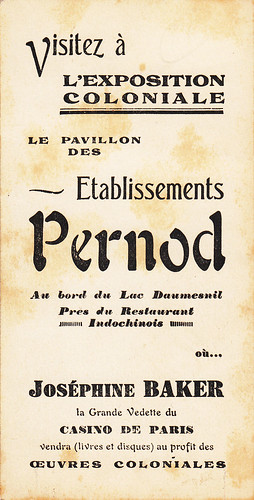 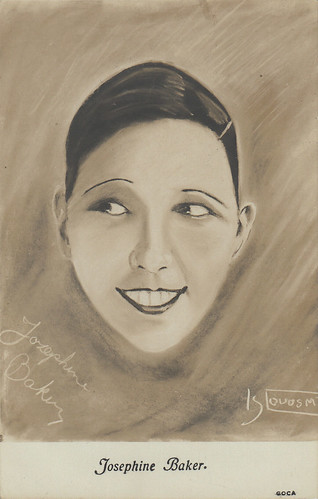 Vintage postcard by Goca: Illustration: ?. Collection: Marlene Pilaete. We’ve not been able to decipher the name of the talented artist who made this drawing of Josephine Baker. 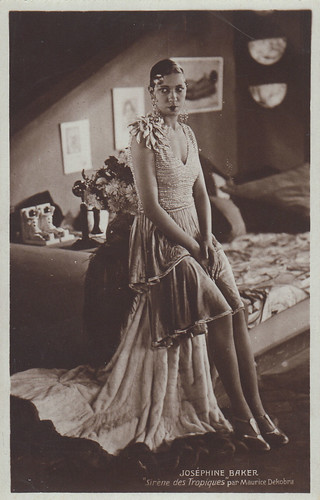 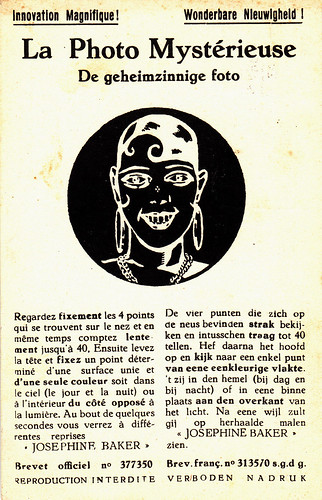 Belgian postcard in the La Photo Mystérieuse series by Burtec, Bruxelles. Collection: Marlene Pilaete. Caption: Great innovation! The Mysterious Photo. Stare at the four dots on the nose and at the same time slowly count to 40. Then raise your head and stare at a certain point of a solid surface of one colour either in the sky (day and night) or inside on the opposite side to the light. After a few seconds, you will see 'Josephine Baker' over and over again.

Persona non grata in the U.S.A.

During the Second World War, she worked tirelessly for the French Resistance and her patriotism earned her several decorations. In 1947, Josephine Baker bought a castle, called 'Les Milandes', in Dordogne, France. At the end of the 1940s, she failed again to establish herself as a popular entertainer in the U.S.A. with 'Paris Sings Again'. Furthermore, she bitterly noticed that there was still no equal rights for coloured people. When she went back to France, she appeared successfully in several shows at a Paris nightclub in 1948 and in 'Féeries et Folies' at the Folies-Bergère in 1949.

In 1951, she finally made it as a star in her native country and was acclaimed in several cities. But she was still upset by racial discrimination and, in October, she decided to sue the owner of the famous Stork Club in New York, after considering that she had been refused service because she was black. This caused a feud with columnist Walter Winchell and made headlines.

Josephine became more and more strident in her criticism against the way black people were treated and, in the end, she found herself persona non grata in the U.S.A. for several years. Wanting to prove that racial harmony was possible, she decided, from 1954 on, to adopt children of various races, colours and religions. Les Milandes became the living place of her 'Rainbow Tribe', as she called it. 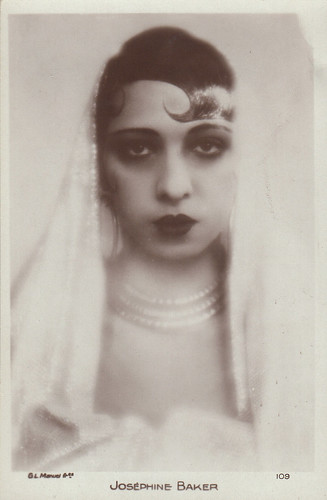 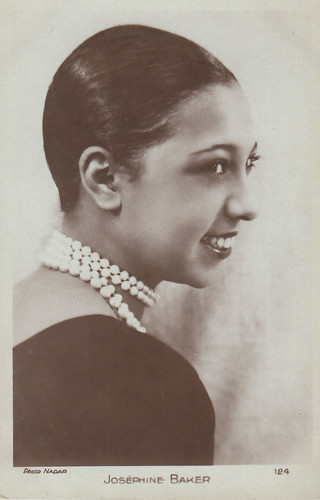 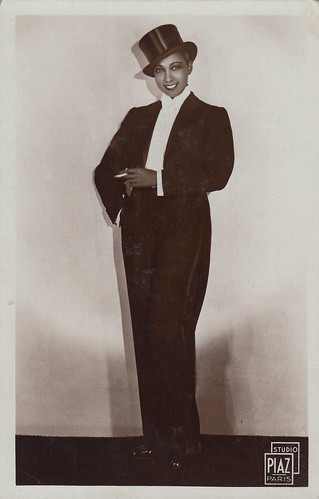 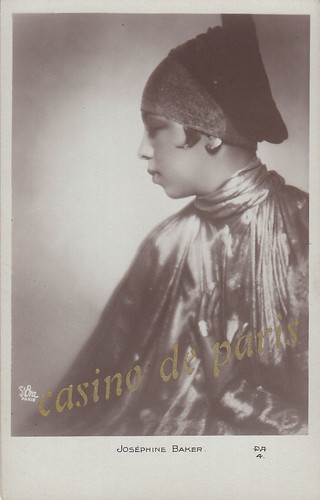 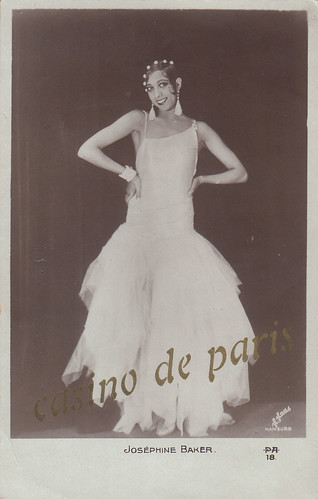 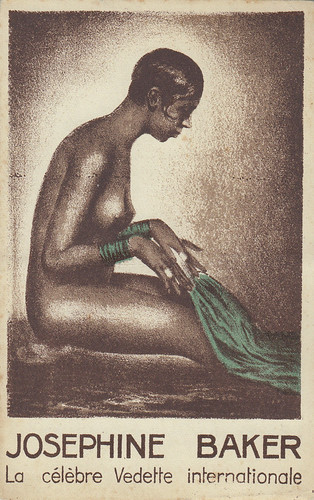 French promotional postcard for the revue 'Paris qui remue' at the Casino de Paris (1930-1931). The inspiration for this card was a photo by D’Ora. Caption: The world-famous star.


Despite a series of 'farewell' shows at the Olympia in 1956, Josephine Baker didn’t give up her career and she was notably back at the same place for 'Paris mes amours' (1959-1960) which drew large crowds. She got back in touch with the US public with 'The Fabulous Josephine Baker' in 1960 and with 'Josephine Baker and Her Company' in 1964.

She also participated in the March of Washington in 1963. In the 1960s, her finances went downhill and her castle was sold in 1968. Deeply touched by Josephine’s misfortunes, Princess Grace offered her a place to stay in Roquebrune-Cap-Martin, near Monaco.

In her last years, she continued to perform. She was a hit at the Carnegie Hall In New York in 1973 and, in 1974, at the Monegasque Red Cross gala and at a Royal Performance in London. On the 8th of April 1975, she made a triumphant comeback in Paris in a show based on her life at the Théâtre Bobino. In the audience were such people as Princess Grace, Mick Jagger, Jeanne Moreau, Alain Delon, Mireille Darc, Tino Rossi and Sophia Loren.

She also performed cheerfully the day after but, on the 10th of April, she was found unconscious, a victim of a brain haemorrhage. She was taken to the hospital, where she died on the 12th of April.

Josephine Baker had a tumultuous love life. Her first husband was Willie Wells in 1919 but the marriage was already over in 1920. She then married William Howard Baker in 1921 but Josephine was much more interested in her stage career than in marital life and they soon separated. From 1926 to 1936, her 'official' lover was Giuseppe Abatino, who also became her manager. But this didn’t prevent Josephine to have affairs with other men such as singer Jacques Pills, who, later became Edith Piaf’s first husband. When she planned her trip to America in 1935, she admitted before the authorities that she was still married to William Baker. It seems that she took the opportunity of her stay in the U.S.A. to finally get a divorce.

In 1937, she remarried businessman Jean Lion but they soon separated and the divorce was granted at the beginning of the 1940s. Her last husband was orchestra leader Jo Bouillon in 1947. At the end of the 1950s, their marriage was in serious trouble and a discouraged Jo Bouillon finally called it quits in 1960. According to Josephine Baker’s death certificate, she was still officially married to Bouillon when she passed away. Several sources mention a last marriage to American artist Robert Brady in 1973 but it is said that they only unofficially exchanged marriage vows in an Acapulco church and this 'spiritual' union had no legal value. 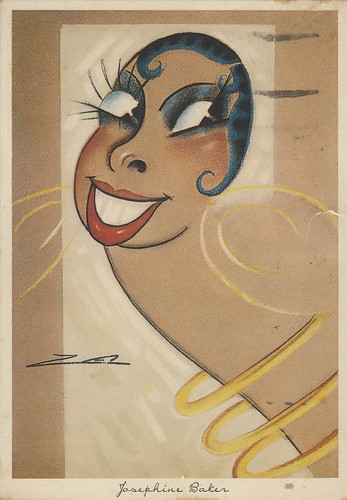 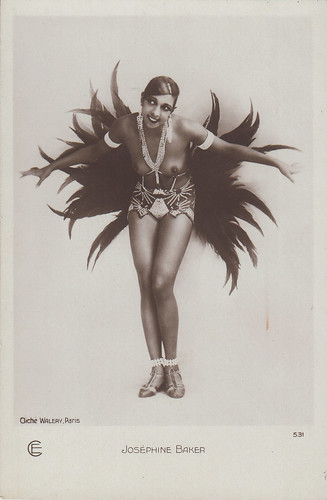 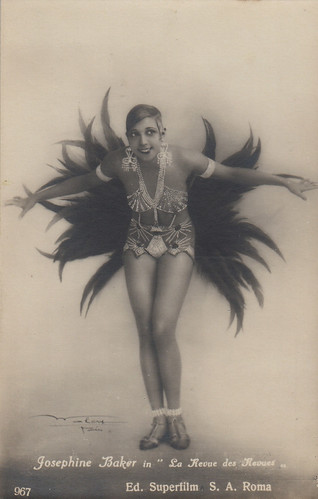 Italian postcard by Ed. A. Traldi, Milano, no. 967. Photo: Walery. Collection: Marlene Pilaete. You will notice a difference between this postcard and the previous one: a bra covering Josephine’s breasts. Italian editor Traldi chose to censor Josephine’s nakedness and print a retouched photo, possibly in a bout of prudery? 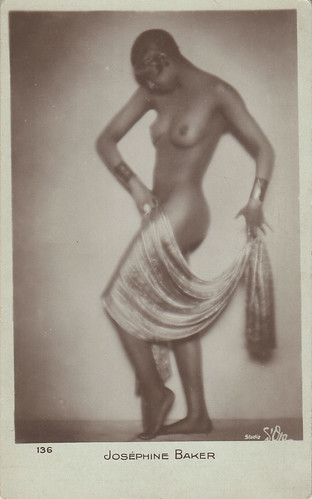 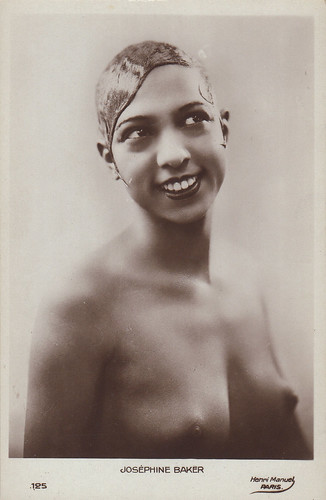 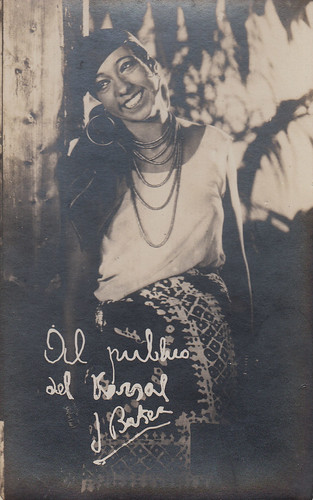 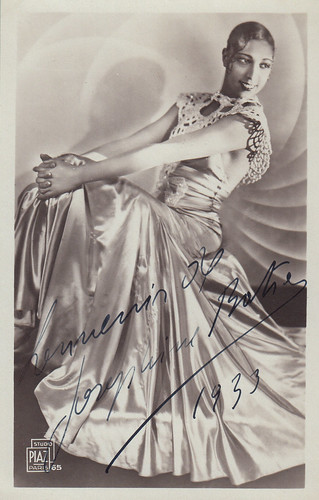 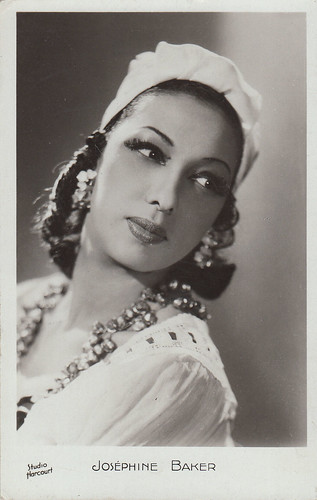 French postcard. Photo: Harcourt. A previous owner of this card wrote in pencil on the back that it was related to the revue 'Paris-London' at the Casino de Paris (1939-1940). 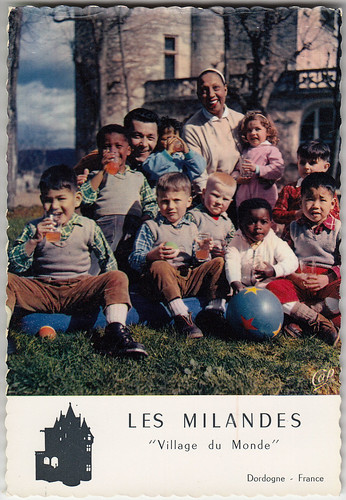