Dancing Queen
Ursula Deinert was born in 1910, Berlin, Germany. She started her stage career in 1934 in Essen. In Berlin she became a renowned dancer from 1936 on. She performed at the Deutschen Opernhaus, the Komischen Oper and at the Schauspielhaus. She made her film debut in the short film Was sagen Sie dazu?/What Do You Say About It? (1936, Hans Morschel). The following years she conquered the audiences when she danced in light entertainment films like Schlussakkord/Final Accord (1936, Detlev Sierck aka Douglas Sirk), Moral (1936, Hans H. Zerlett), Mordsache Holm/The Holm Murder Case (1938, Erich Engels), Nanon (1938, Herbert Maisch) starring Johannes Heesters, Frau am Steuer/Women at the Helm (1939, Paul Martin) starring Lilian Harvey, and Brand im Ozean/Fire in the Ocean (1939, Günther Rittau) with Hans Söhnker. She mostly appeared in these films as a dancer, but sometimes also as a singer. Her acting abilities were less in demand. The Nazis believed the dancing queen to be the only role which allowed women to preserve their natural grace and ‘innate natural gifts’, so dancers like Deinert, but also La Jana, Marika Rökk and Margit Symo, were accorded a primary place in the musical genre. Their dancing characters were believed to contribute a key image to the films of the Third Reich. 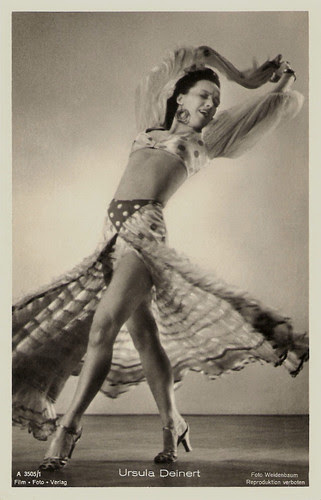 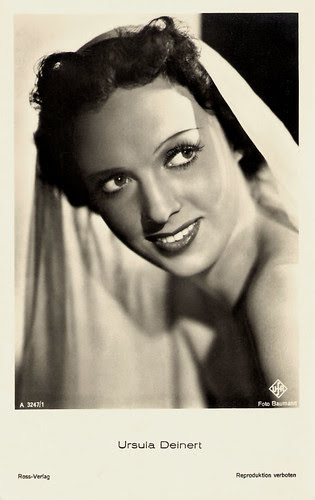 Primaballerina
In the 1940's Ursula Deinert continued to dance in such films as Bal paré (1940, Karl Ritter) featuring Ilse Werner, Die Rothschilds/The Rothschilds (1940, Erich Waschneck) and Stukas (1941, Karl Ritter). She also appeared as a primaballerina in the notorious propaganda melodrama Jud Süss/Jew Süss (1940, Veit Harlan). In 1941 she retired from the film business and her last film appearance was in Sonntagskinder/Sunday’s Children (1941, Jürgen von Alten). After 1945 Ursula Deinert worked as a ballet master in Hamburg, Bremerhaven and Gießen. From 1954 till 1959 she worked as a solo dancer at the Friedrichstadtpalast, and also made guest appearances as a first solo dancer at the Staatsoper Berlin. Since 1961 she worked in East-Berlin as a dance pedagog at the Staatlichen Fachschule für Artistik. She was married to production designer Dieter Berge. Ursula Deinert died in 1988, in East Berlin, East Germany.