Italian actor Roberto Risso (1925-2010) is best known as the shy and upward policeman who falls in love with Gina Lollobrigida in the comedy Pane, amore e fantasia/Bread, Love and Dreams (1953). 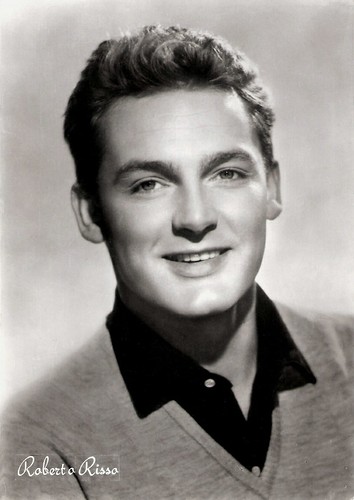 Italian postcard by Rotalfoto, Milano, no. 443.

Roberto Risso was the stage name of Pietro Roberto Strub, born in Geneva, Switzerland in 1925.

While still studying architecture, he made his film debut with a brief appearance in Il leone di Amalfi/The Lion of Amalfi (Pietro Francisci, 1950), starring Vittorio Gassman.

He got a bigger part in Domani è un altro giorno/Tomorrow is another day (Leonide Moguy, 1951), as the seducer of Anna Maria Pierangeli (Pier Angeli).

Thanks to his looks, he had a successful career as the ideal boyfriend in lightweight and sentimental films.

He played the role of Pietro Stelluti, a shy, awkward and upright carabiniere in a remote mountain village, in love with the light-hearted and bubbly Gina Lollobrigida. Both films were loved by the public and the critics alike. 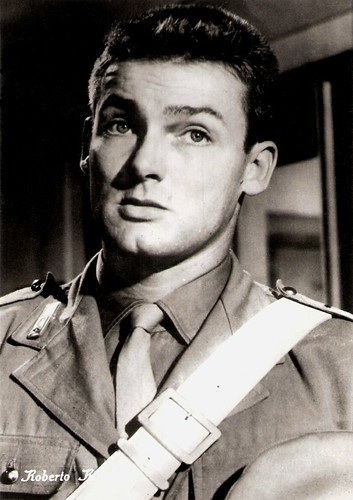 Italian postcard in the series Divi del Cinema by Vetta Traldi, Milano, no. 74.

Roberto Risso continued his career with many films in which he appeared mostly as a character actor.

Later, tired of the typecasting, he spent some time in film production.

In the late 1960s he retired from the cinema. His last film was the Spaghetti Western Odia il prossimo tuo/ Hate Thy Neighbor (Ferdinando Baldi, 1968), in which he credited Robert Rice.

That year, he was also a game contestant in the Rai TV show Domani è un altro giorno/Those on Sunday. On that occasion he declared that he had left the film industry to work in the fashion world.

In the course of the 1970s, he reappeared in some soap operas.

Roberto Risso died in Milan, Italy in 2010, six days before his eighty-fifth birthday. He was married to Mimma Ciurlo. 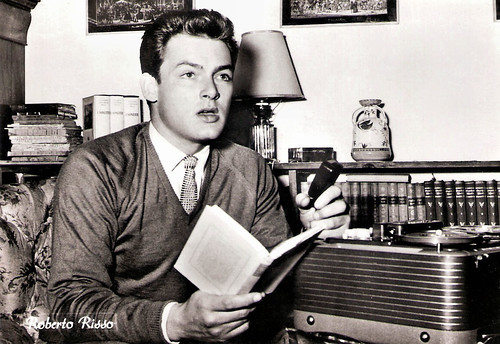