Dashingly handsome Oliver Tobias (1947) was born in Switzerland but started his career in the original London production of Hair (1968), playing the prime rebel role of Berger. He is also known for the title roles in the popular TV series Arthur of the Britons (1972-1973) and the soft-core flick The Stud (1978) opposite Joan Collins. In the following decades, he continued to work as a stage, TV and film actor and director in Great Britain as well as in Germany and Switzerland. 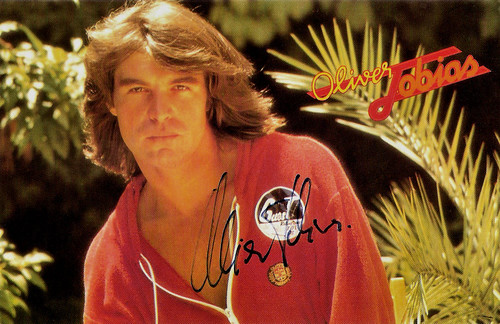 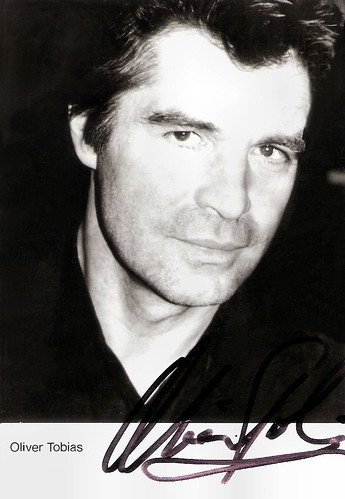 
Oliver Tobias was born in 1947 as Oliver Tobias Freitag in Leimbach, a village near Zürich in Switzerland. He is the son of the Austrian-Swiss actor Robert Freitag and the German actress Maria Becker. He had two brothers, Christopher and Benedict. Benedict Freitag also became an actor. Christopher committed suicide at the age of 20.

After the divorce of his parents, 8-years-old Oliver went with his mother to the United Kingdom and later trained at East 15 Acting School, an off-spring of Joan Littlewoods Theatre Workshop in London. During his holidays he studied dance at the Ecole de Dance in Zürich.

In 1968, he appeared in the original London production of Hair, playing the prime rebel role of Berger. The following year, he starred in, directed, and choreographed the rock opera in Amsterdam and, in 1970, he directed a production in Tel Aviv. Oliver continued his counterculture musical career with the role of Judas in a German production of Jesus Christ Superstar.

Tobias's film debut was in the French-Italian-Yugoslav adventure film Romansa konjokradice/Romance of a Horsethief (Abraham Polonsky, 1971), co-starring with Yul Brynner, Serge Gainsbourg and Eli Wallach. He then co-starred with Charlotte Rampling and Fabio Testi in the Italian film Addio fratello crudele (Giuseppe Patroni Griffi, 1971), based on the Jacobean tragedy 'Tis Pity She's a Whore by John Ford.

He became popular as Arthur in the TV series Arthur of the Britons (Sidney Hayers a.o., 1972-1973). He returned in the role in the feature film King Arthur, the Young Warlord (Sidney Hayers, Pat Jackson 1975). Gary Brumburgh at IMDb: “A remote and rather prevailing sullenness has only enhanced the mystique and charisma found in dashingly handsome Oliver Tobias.”

Peter Weir directed him in the TV series Luke's Kingdom (Peter Weir, 1976), set in colonial Australia. In 1978, he co-starred with Joan Collins in The Stud (Quentin Masters, 1978), based on the 1969 novel of the same name by Collins' younger sister Jackie Collins. Tobias later claimed that his typecasting in the film as an amorous waiter who sleeps his way to the top ruined his career, while the box-office success of the film helped Joan Collins to restart her career. 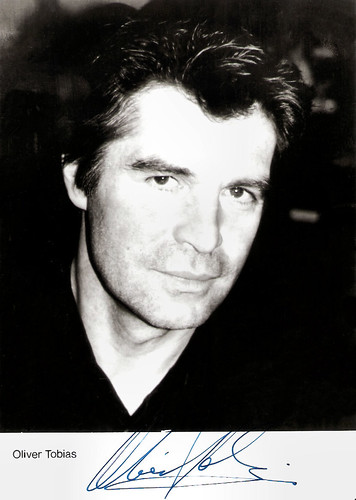 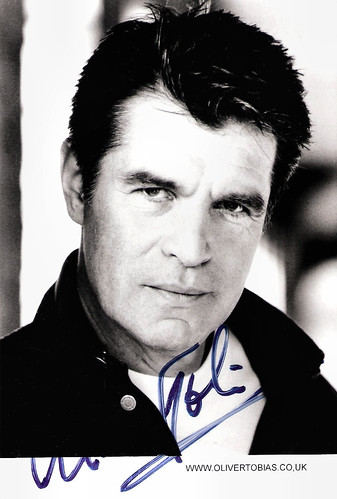 
In 1981, Oliver Tobias starred in the British television series Dick Turpin's Greatest Adventure, where he played the character Noll Bridger, a Colonial North American. He also starred in the children's drama series Smuggler (1981), set in Cornwall in 1801. He appeared as The Devil in the video for Ultravox's 1982 hit Hymn.

His films included the British drama The Wicked Lady (Michael Winner, 1983), a remake of the popular 1945 Gainsborough melodrama of the same name. The film received a Razzie Award nomination for Faye Dunaway as Worst Actress. He was also part of the cast of the soft-porn biopic Mata Hari (Curtis Harrington, 1985) which focused more on the disrobing of its star Sylvia Kristel than anything else.

In Austria he starred as Johann Strauss - Der König ohne Krone/Johann Strauss: The King Without a Crown (Franz Antel, 1987) with Mathieu Carrière and Karin Dor. He did not give up his musical roots, showing his prowess in the title role of the rock opera Peer Gynt in Zurich, and in the role of The Pirate King in The Pirates of Penzance at London's Drury Lane Theatre.

As a stretch he also appeared as Bassa Selim at London’s Royal Opera House Covent Garden in the W.A. Mozart opera The Abduction from the Seraglio in 1988 and 1989. Then he acted in a non-musical, the powerful AIDS drama The Normal Heart.

A year later, Tobias played Rebecque, an aide to the Prince of Orange (Paul Bettany), in the TV drama Sharpe's Waterloo (Tom Clegg, 1996). He also acted in the Irish comedy The Brylcreem Boys (Terence Ryan, 1998), starring Bill Campbell and Gabriel Byrne. In 2000, he returned to the West End in the musical La Cava.

Three years later, he portrayed Percival Brown in the 50th-anniversary production of The Boy Friend and the next year toured in the rock musical Footloose. He has been acting in a variety of roles for German and Swiss TV and also worked on stage in Italy. Tobias also directs such plays as An Airfield in England (2005), produced at Lasham Airfield, England, and Ritter von Miracle by Lopez de Vega which was produced in the castle of Berlechingen in Germany. His brother Benedict played the leading role of Luzman.

His most recent film is the British war comedy Dad's Army (Oliver Parker, 2016), based on the classic BBC television sitcom Dad's Army. Catherine Zeta-Jones plays an elegant journalist, who is sent to report on the Walmington-on-Sea Home Guard platoon. This is all before MI5 discovers that there is a German spy hiding in the fictional British town. The film received generally negative reviews from critics, though Toby Jones' performance as Captain Mainwaring was praised.

Oliver Tobias is divorced from Camilla Ravenshear, with whom he had two daughters, Angelika and Celeste. In 2001, he married Polish-born model Arabella Zamoyska, who is 27 years younger. They have two boys, Luke and Felix, and live in London.