Last Saturday, EFSP had a post with a series of French postcards by Editions Cinémagazine, recently acquired by Ivo Blom. We love these sepia postcards of the 1920s, and have many more in our collections. Last week, we published 25 Cinémagazine cards with Hollywood stars. For today, we chose 25 cards with European stars, which we did not publish before. 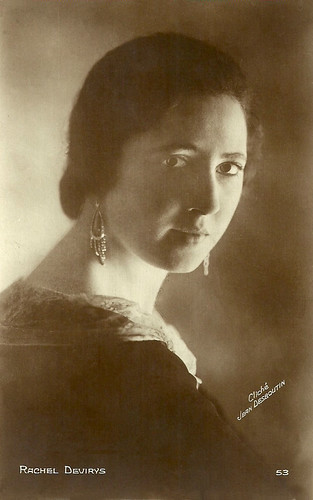 Rachel Devirys (1890-1983) was a Franco-Russian actress, who started in French cinema in 1917 and is known for such films as Visages d'enfants (Jacques Feyder, 1923) as the stepmother of Jean Forest, Monte Carlo (Louis Mercanton, 1925) with Betty Balfour, and Croquette (Mercanton, 1928) again with Balfour. Devirys continued well into the sound era, with films such as Maternité (Jean Benoît-Lévy, 1930). One of her last parts was in Les enfants terribles (Jean-Pierre Melville, 1950). 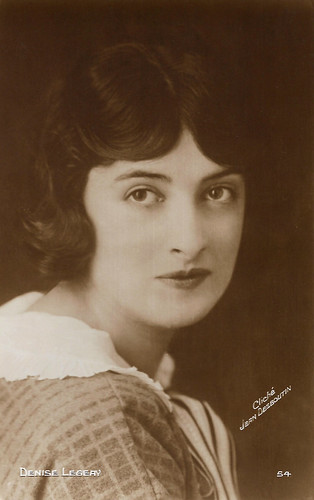 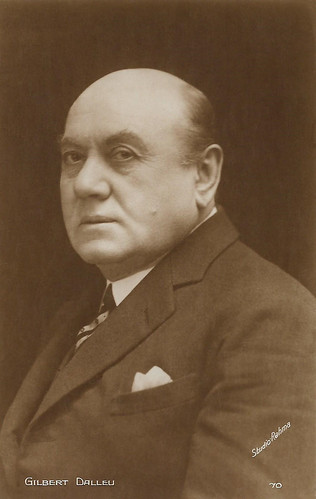 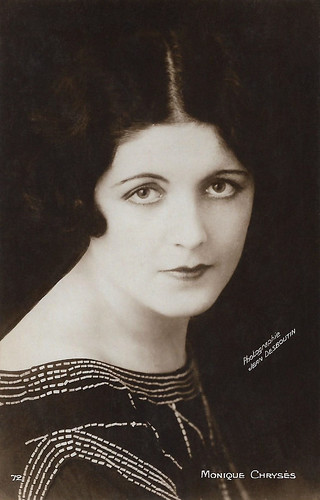 Little is known about Monique Chrysès. Her life dates are lacking. She debuted in French silent film in Le père Goriot (Jacques de Baroncelli, 1921), where she played Madame de Restaud opposite Gabriel Signoret as the title character. In 1922 she acted in the Oscar Wilde adaptation Le crime de Lord Arthur Savile (René Hervil, 1922) with the British actor Cecil Mannering as the title character. In 1923 she appeared in Germaine Dulac's serial Gossette (1923) starring Régine Bouet and costarring Maurice Schutz. Then, she was Mme Belmont in L'enfant des halles (René Leprince, 1924) and Marthe Guéroy in L'aventurier (Maurice Mariaud, Louis Osmont, 1924) with Jean Angelo. After years of absence from the screen, Chrysès had a last, supporting part in the sound film La voix qui meurt (Gennaro Dini, 1934) starring André Burdino. 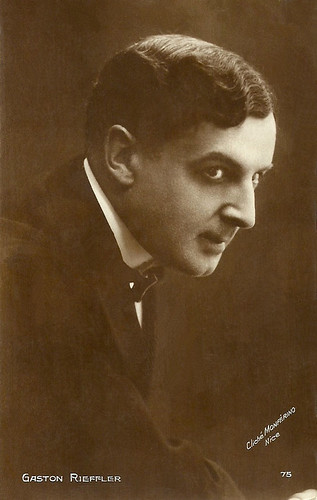 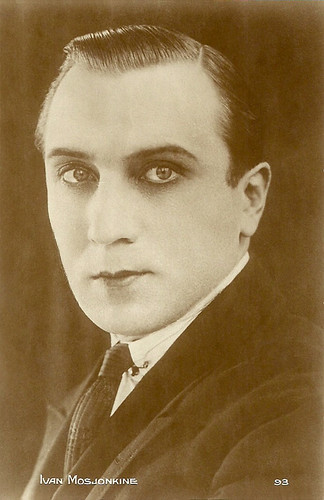 French postcard by Editions Cinémagazine, no. 93.

Russian actor Ivan Mozzhukhin (1889-1939) was a legendary star of the European silent film. He escaped from execution by the Soviet Red Army and made a stellar career in Europe, but he suffered in Hollywood. 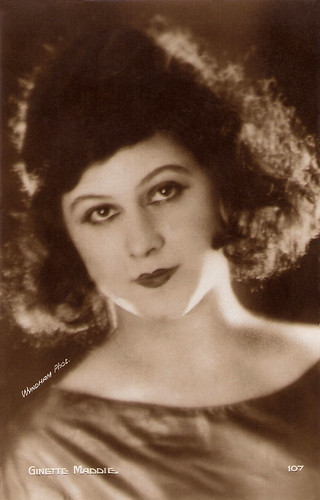 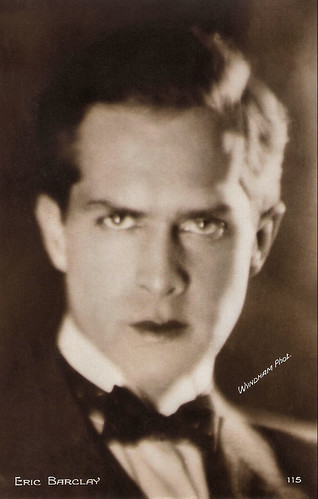 Eric Barclay (1894–1938) was a Swedish film actor. Barclay became a prominent actor in French silent films of the early 1920s, often working with director Jacques de Baroncelli. He also appeared in German and British films and those of his native Sweden. 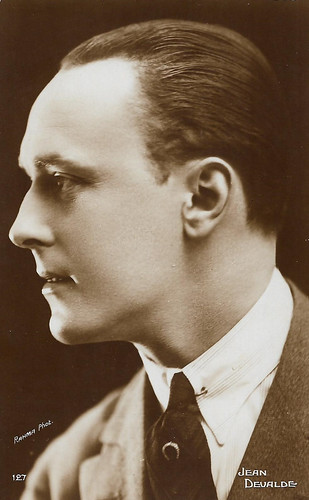 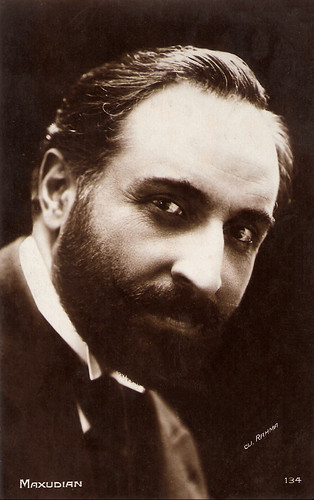 Max Maxudian (1881-1976) was a French stage and film actor with tall, broad shoulders, a high forehead under hair thrown-back, a Bourbon nose, a black beard framing an energetic face, tempered by Oriental eyes. He appeared in supporting parts in 77 films, including some of the silent classics of Abel Gance like the epic Napoleon (1927). 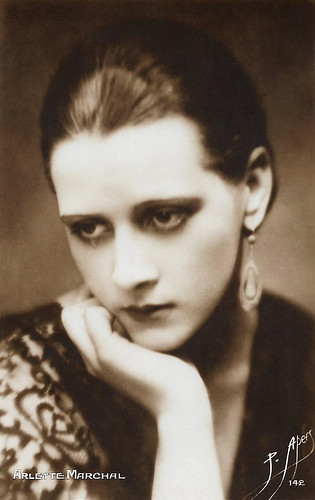 Elegant French actress Arlette Marchal (1902-1984) started as a fashion model and from the 1950s on she dedicated herself mostly to her fashion enterprise. Between 1922 and 1951 she starred in 41 European and American films.

French postcard by Editions Cinémagazine, no. 153. 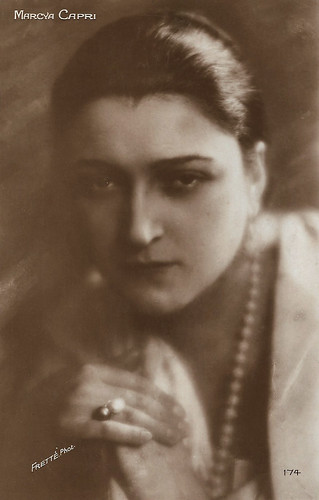 Little is known about Marcya Capri, no life dates are known. She was first seen in The Empire of Diamonds (Léonce Perret, 1920), an American film shot on location in the South of France and elsewhere. Perret then hired her for major parts in The Money Maniac (1921) starring Robert Elliott, and his French production, L'écuyère (1922). She had a smaller part in Perret's superproduction Koenigsmark (1923), starring Huguette Duflos as Grandduchess Aurore and Jaque Catelain as her tutor Raoul Vignerte. Capri played Melusine de Graffenfried, the Grand Duchess's head of staff. Afterwards, Capri acted in La closerie des Genets (André Liabel, 1925) opposite Henry Krauss and Ninna Vanna. In Les deux mamans (Giuseppe Guarino, 1925), and the Franco-Romanian production Calvaire/ Drumul iertarii (Ion Niculescu-Bruna, Gabriel Rosca, 1927). Capri acted opposite Soava Gallone as the Other Woman in Celle qui domine (Carmine Gallone, Léon Mathot, 1927). After some bit parts and years of absence from the screen, she returned in 1936 for a small part in the sound film Marinella (Pierre Caron, 1936), starring Tino Rossi and Yvette Lebon. 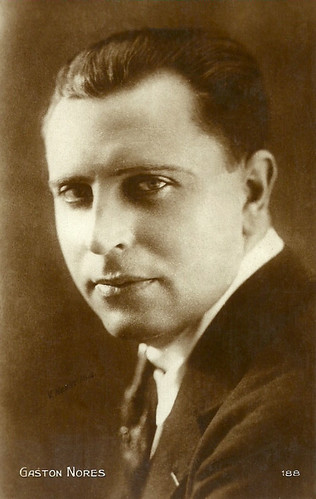 Gaston Norès (1894-1958) was a Belgian actor, who first chose operetta as his career and triumphed as Prince Danilo in 'The Merry Widow', just before the First World War. After four years at the front, his vocal cords were ruined and he could not sing anymore. He was introduced to film director Gérard Bourgeois and became the lead in the two-part film La dette de sang (1922) and instantly a star. Several films followed, a.o. the serial Tao (Gaston Ravel, 1923), in which he played the young adventurer Jacques Chauvry opposite Joë Hamman. The 10-episodes serial was a huge success. He only played in 12 films and often had supporting parts. At the advent of sound cinema, Norès's career was over. His last film was the early sound film Les papillons de nuit (Maurice Kéroul, 1930). 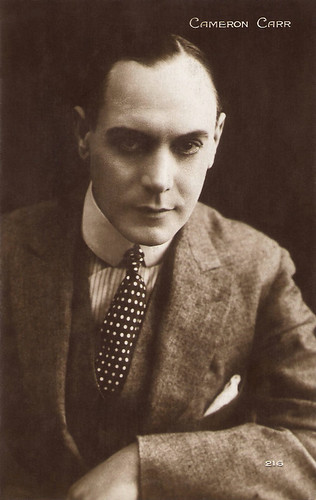 French postcard by Editions Cinémagazine, no. 216.

Cameron Carr (1876-1944) was a British film actor of the silent era. Carr started his career in 1918, working for Broadwest, directed by Walter West. Often he was the other man opposite leading man Stewart Rome, with actress Violet Hopson in the middle. In 1922 he alternated his work at Broadwest with Stewart and Hopson, with roles at Stoll Pictures. There he worked in films by and with Guy Newall, and with Ivy Duke. Carr had his first lead in 1925 in the Stoll production The Notorious Mrs. Carrick, playing David Carrick. In several films, Carr played second fiddle to Clive Brook or Victor McLaglen. From 1927, he mainly played supporting parts for BIP. 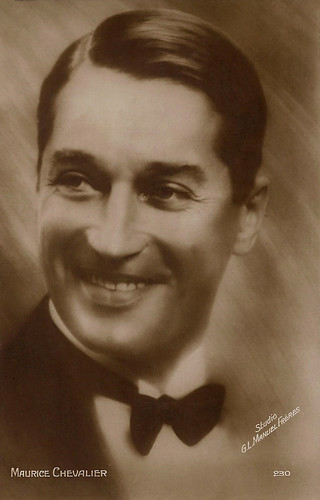 Maurice Chevalier (1888-1972) was a French actor, singer and entertainer. His trademark was a casual straw hat, which he always wore on stage with a cane and a tuxedo. 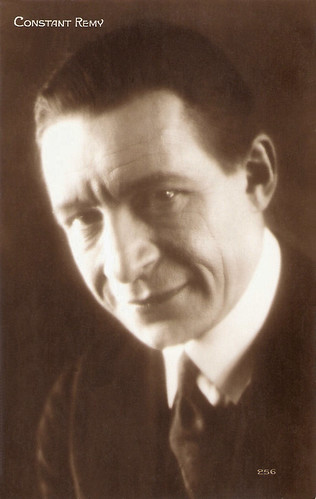 French postcard by Editions Cinémagazine, no. 256. 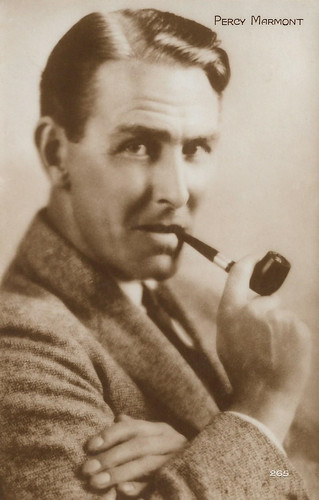 French postcard by Editions Cinémagazine, no. 265. 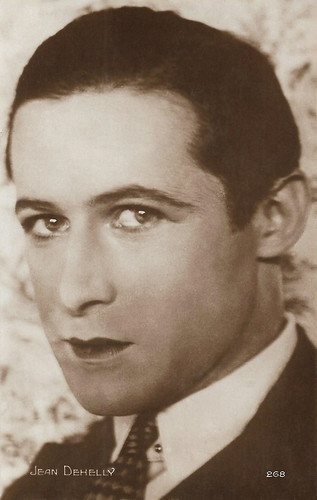 French postcard by Editions Cinémagazine, no. 268. 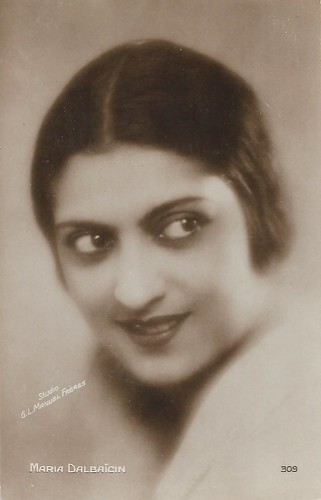 María Dalbaicín (1902-1931) was a Spanish flamenco dancer who became an actress. Dalbaicín grew up in a gypsy family and her mother Agustina Escudero Heredia was nicknamed the 'Queen of Gypsies'. From 1925 on, she appeared in French and German films. When she died in 1931, she was only 28. 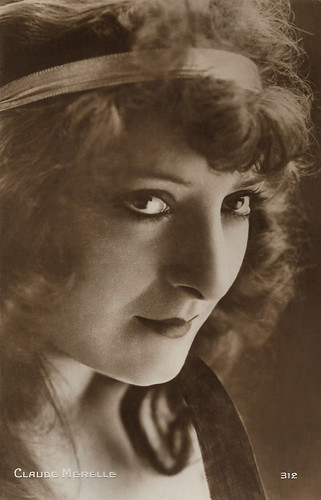 French postcard by Editions Cinémagazine, no. 312.

Claude Mérelle (1888-?) was a French film actress of the silent era. She is best remembered as the evil Milady de Winter in Les trois mousquetaires/The Three Musketeers (Henri Diamant-Berger, 1921). 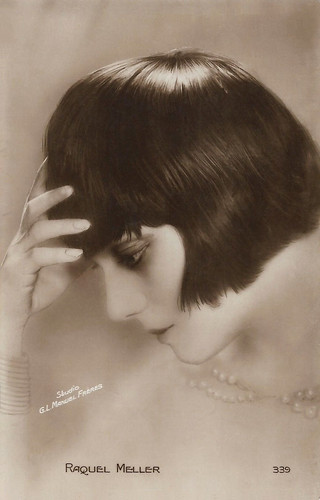 Spanish actress, singer, and diva Raquel Meller acted mainly in French silent films. She was already a highly popular singer before debuting as a film actress in 1919. 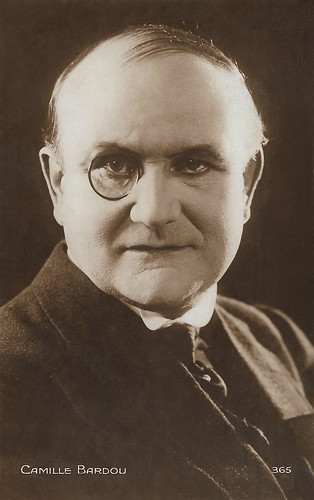 French postcard by Editions Cinémagazine, no. 365. 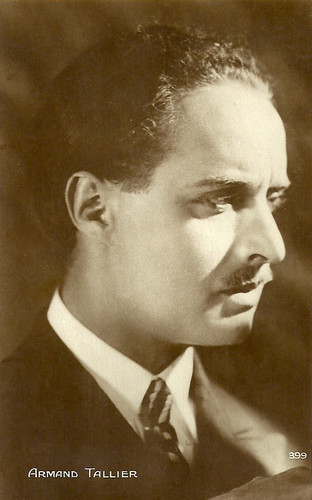 French postcard by Editions Cinémagazine, no. 399.

Armand Tallier (1887-1958) was a stage and screen actor, who peaked in the silent era. Theatre director Jacques Copeau, who had opened the alternative Théâtre du Vieux Colombier, directed Tallier on stage from 1913 for several years. Inspired by him, Tallier began with Laurence Myrga the Studio des Ursulines, one of the first Parisian art houses, founded to ensure the diffusion of avant-garde cinema. The first session took place in January 1926. As an homage, the Prix Armand Tallier for the best book on film is awarded since 1958 (since 1977 called Prix littéraire du syndicat français de la critique de cinéma). 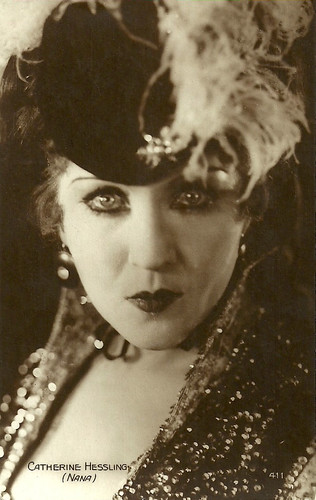 French postcard by Editions Cinémagazine, no. 411. Catherine Hessling as the title character in Nana (Jean Renoir, 1926), based on the homonymous novel (1880) by Emile Zola.

Catherine Hessling (1900-1979) was an attractive brunette with bee-stung lips, who started as a model for the painter Pierre-Auguste Renoir (1917-1919) in the Provence. She married his son Jean in 1920 and they had a son Alain in 1921. From 1924 Hessling acted in Jean Renoir's first films, first in Catherine/Une vie sans joie (1924, re-edited by Albert Dieudonné in 1927), about an orphan girl who is a victim of the jealousy of women and the greed of men. In her second film, La fille de l'eau/The Whirlpool of Fate (1925), Hessling is the daughter of a pole man, whose father drowns and whose uncle tries to rape and rob her. Renoir's next production was the prestigious and costly Nana (Jean Renoir, 1926), filmed at the Bavaria Studios in Munich, and with stars like Jean Angelo and Werner Krauss. Hessling and Renoir became household names. 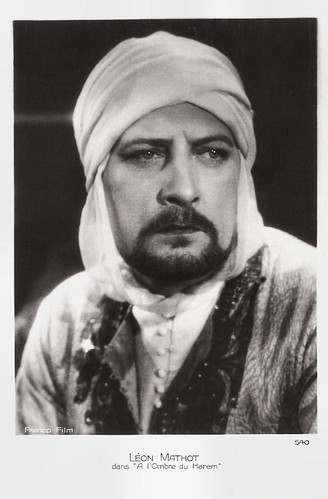 French postcard by Cinémagazine-Edition, no. 540. Photo: Franco Film. Léon Mathot in the French silent film Dans l'ombre du harem/In the Shadow of the Harem (Léon Mathot, André Liabel, 1928). The title on the postcard is slightly incorrect.

Léon Mathot (1886-1968) was a French actor and director, who became well-known for his role of Edmond Dantès in the French serial Le Comte de Monte-Cristo (1918), directed by Henri Pouctal. Mathot became one of the most popular stars of French silent film of the 1920s with such film as L'Empereur des pauvres (René Leprince, 1922) and Coeur fidèle (1923) by Jean Epstein. From 1927, he also became a film director, directing over 20 films.