Robertson Hare (1891-1979) was an English actor, who came to fame in the Aldwych farces between 1923 and 1933. Bald, short and fussy, Hare made his stage career in character roles, often as a figure of put-upon respectability. On TV, he played the Archdeacon in the popular BBC sitcom, All Gas and Gaiters (1966-1971). 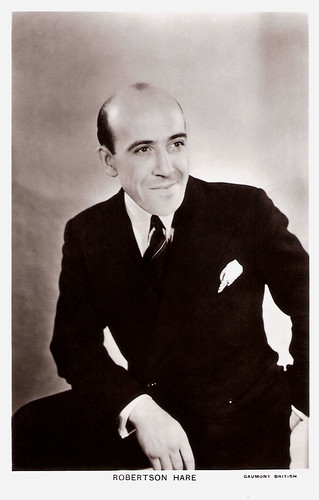 British postcard in the Picturegoer Series, no. 947a. Photo: Gaumont British.


John Robertson Hare was born in Islington, London, in 1891. He was the younger child and only son of Frank Homer Hare, a manager at The Daily Telegraph, and his wife, Louisa Mary, née Robertson. He was educated at Margate College in Kent and then studied drama with the actor and librettist Lewis Cairns James.

In 1911 Hare made his professional stage debut, playing the Duke of Gallminster in a provincial production of The Bear Leaders. The following year he made his London debut as an extra in Gilbert Murray's version of Oedipus Rex at the Royal Opera House. In 1913 he had his first role in a West End production, as Kaufman in a detective play, The Scarlet Band, at the Comedy Theatre.

He then toured the provinces for a number of years. His first leading part was the title role of Grumpy (1914-1916), by Horace Hodges and T. Wigney Percyval, which was one of his favourite roles. Even at this early stage of his career Hare was playing old men: Grumpy is an irascible retired lawyer. In 1915 he married (Alice) Irene Mewton, with whom he would have one daughter. During the war he drove lorries for the army in France.

After war service, Hare resumed his acting career. He came to the notice of the West End public as James Chesterman in a new farce, Tons of Money, in which he and the actor-manager Tom Walls played supporting roles, with Ralph Lynn in the lead. The play ran for nearly two years, after which Walls recruited Lynn and Hare to join him in a series of new farces at the Aldwych Theatre. There were eleven plays in this series, which came to be known as Aldwych farces; they played continuously from 1923 to 1933. Hare played in them all.

Hare created a familiar style and was identified completely with the part of the prissy little man, constantly in a state of unease and agitation, invariably sucked into some maelstrom of domestic upset and dislocation, unfailingly compromised and often trouserless. The bald dome, with brows furrowing anxiously beneath it; the spectacles, emphasising the shock and bewilderment with which he responded to his travails; the jerky, staccato movements as his distress grew – these made him a highly recognisable stage figure. In concert with the worldly wise Tom Walls and the affable Ralph Lynn, he became one of the premier exponents of English farce. 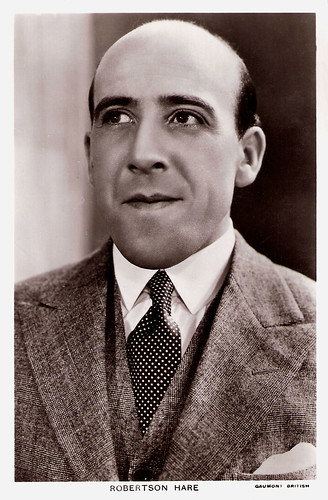 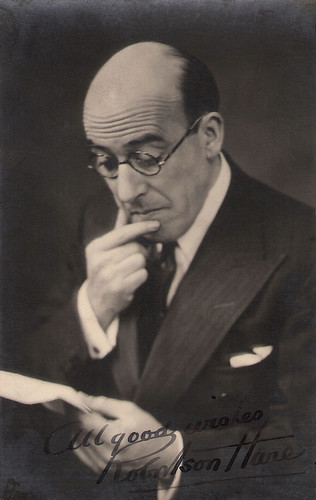 In particular Plunder, starring Tom Walls and featuring Ralph Lynn, Winifred Shotter en Robertson Hare, was a major commercial and critical success. It helped to cement Walls's position as one of the leading stars of British cinema. Other popular Aldwych film farces were A Cuckoo in the Nest (Tom Walls, 1933), Turkey Time (Tom Walls, 1933) and Dirty Work (Tom Walls, 1934).

After the last Aldwych stage farce in 1933 Robertson Hare played his customary types in more than twenty new farces over the next three decades. One of his most successful creations was Willoughby Pink in Travers's Banana Ridge (1938), as a British Empire builder with a dubious past.

In the cinema he was seen in such comedies as Aren't Men Beasts! (Graham Cutts, 1937) and Banana Ridge (Walter C. Mycroft, 1942) with Alfred Drayton. After the war, he appeared on stage in the revue Fine Fettle (1959) with Benny Hill and Shani Wallis, and in the long-running musical A Funny Thing Happened on the Way to the Forum (1963), as Erronius to Frankie Howerd's Pseudolus.

On screen he could be seen as one of the three men who are shipwrecked with the young Joan Collins on a deserted island in Our Girl Friday/The Adventures of Sadie (Noel Langley, 1953). He also played a supporting part in the Cliff Richard musical The Young Ones (Sidney J. Furie, 1961).

In the 1960s Hare toured in Arsenic and Old Lace. In 1962 he briefly escaped type-casting, appearing with Wilfrid Hyde White in the film comedy Crooks Anonymous (Ken Annakin, 1962), in which he played an old lag, his familiar bald head disguised under a wig. Other film roles followed in Hotel Paradiso (Peter Glenville, 1966) with Alec Guinness, and Salt and Pepper (Richard Donner, 1968) starring Sammy Davis Jr. and Peter Lawford.

In 1968 he joined Naunton Wayne in Oh, Clarence!, an adaptation of a P. G. Wodehouse Blandings novel, which he played in London, on tour in the provinces, and in South Africa. He reached a new public in the late 1960s in a television series, All Gas and Gaiters (1966-1971), about a cathedral ecclesiastical community, who constantly in-fight amongst themselves. He played the Archdeacon of St. Ogg's, the Venerable Henry Blunt. His final film was the comedy Raising the Roof (Michael Forlong, 1972).

Hare's catch-phrase, which he exploited on stage, on film and on television, was "O Calamity!" In 1979, Robertson Hare died in London at the age of 87. He published his autobiography, Yours Indubitably, in 1957. Shortly before his death he received the OBE.